In the midst of a Super Bowl window, the Buffalo Bills continued to operate aggressively in free agency, signing a slew of talent to bolster the roster in a crowded AFC. Interestingly, one position that has felt neglected has been cornerback. The Bills lost CB Levi Wallace in free agency to the Pittsburgh Steelers and All-Pro CB Tre’Davious White is still recovering from his left ACL tear suffered on Thanksgiving.

Naturally, speculation about what the Bills will do at pick 25 leads to the selection of a cornerback with several elite talents at the top of draft boards. One, in particular, LSU CB Derek Stingley Jr., comes in as potentially the top prospect at the position. However, ankle and foot injuries over the past two seasons may impact his landing spot at the end of April.

2020 – Illness – Sept. Stingley was hospitalized with an illness that caused him to miss the season opener.

2020 – Ankle Sprain – Nov 21 vs Arkansas. The ankle was re-injured in this game during a punt return. He missed the majority of the game but was able to return for the next two games before shutting down for the final 2 games of the season.

2021 – Left Lisfranc Sprain – Aug, Preseason. Stingley suffered a Lisfranc sprain during the first day of practice but managed to return for the team’s season opener.

2021 – Left Lisfranc Sprain (surgery) – Sept. Stingley re-injured his foot from the preseason in a practice and opted to have surgery. He missed the final 10 games of the season and opted not to participate in the Combine.

Despite being able to play through a low ankle sprain rather quickly, the body still needs time to fully heal the structures damaged. If that healing is disrupted by re-injury, then that could lead to further missed time with a decline in performance for any athlete at any level.

Lisfranc injuries are an injury to either the ligaments or bones of the midfoot, specifically the medial cuneiform and base of the second metatarsal. 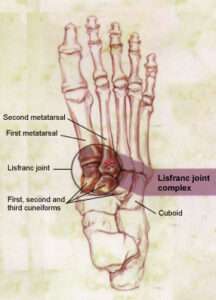 This type of injury occurs due to a simple twist and fall that results in a hyper plantarflexed foot with rotational forces and axial load. To picture this, imagine someone falling on the back of a person’s foot when the foot is flexed downward. While the injury doesn’t have to be as severe, a simple twist and fall that places external rotation and compression to the area could also cause injury. There have also been instances where the foot is stepped on leading to direct trauma to the area and injury occurs. 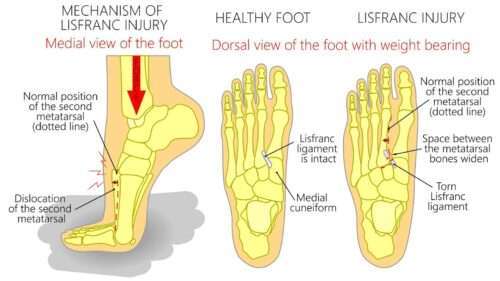 Example of a Lisfranc mechanism of injury. Credit: Watsoniapodiatry.com.au

Following injury, there is difficulty bearing weight, swelling, and tenderness in the localized area. They may have difficulty pushing off the foot during running and visual inspection of the foot may reveal bruising, widening of the midfoot area, or even a noticeable bump. There are not any special tests that can be performed such as seen with an Achilles, ACL, or shoulder labrum that provides a high degree of certainty at the time.

Imaging is completed to assess the severity and correlated with a physical exam. Once the injury is confirmed, the injury can either be immobilized to heal conservatively. If there is a concern for high-level use in athletics, surgery can be performed such as pinning or open reduction internal fixation (ORIF) to the area to re-establish stability for proper healing to either the bones or ligaments. Based on the timeline that Stingley has been on, it appears as though he had ORIF following his injury.

Stingley originally suffered the left Lisfranc injury during the first practice of the preseason in August of 2021. However, he was able to rehab enough to play in the season opener against UCLA. He suited up to play in three games that season before reaggravating the injury in practice the week of September 19th, prior to the Mississippi State game. 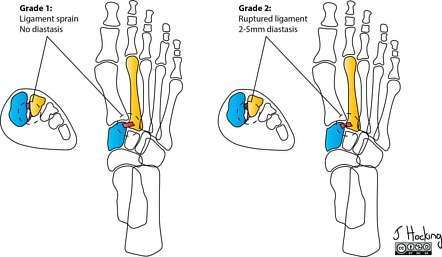 He missed the following week versus Auburn before shutting things down. Stingley elected for surgery during the week of October 3rd with an announcement on October 6th. Based on this timeline with the inevitable outcome, it appears as though Stingley had more ligament damage than he attempted to play through. He either had increased widening of the midfoot joint (> 2 mm shift) or he was unable to rehab effectively to play on Saturdays.

Knowing the surgery was in early October, Lisfranc repairs take on average 10-11.1 months to return to sport, though can return to normal activities sooner as seen in this rehab protocol.  This places Stingley to be fully ready by the time Week 1 of the 2022 NFL season. When looking at the impact that Lisfranc injuries have on performance and draft position, it is not as severe as one would be led to believe.

Those players who suffer a Lisfranc injury do return to play in the NFL at 83 percent up to 90 percent. The research appears to be conflicted on whether this affects performance upon return. Some research indicates there is a decline in performance but is not statistically significant.

Interestingly, other research suggests there is a more notable decline of 21 percent of production in the following first season and starts in fewer games in the following two and three years. It’s noted that this is more likely to be seen in offensive players rather than their defensive counterparts. It’s worth highlighting that this study went on to state using that article that players return to play without adequate recovery. Stingley will have nearly an entire year before playing in a meaningful game.

Career length does not appear to be drastically impacted, though the literature does note that players with a Lisfranc injury going into the NFL Draft are impacted. They are more likely to go undrafted, appear in fewer games (16.9 vs 23.3), have potentially shorter NFL careers (62.5 percent vs 69.6 percent), and have a worse draft position (142 vs 111.3) when compared to controls. Those with a residual >2 mm displacement (41.5 percent) following surgery fared even worse.

Furthermore, long-term studies with an average of 11 years of follow-up showed that there is the possibility of post-traumatic arthritis with 72 percent showing arthritic changes and 54 percent symptomatic. There also isn’t research to suggest that he will be at a greater risk of re-injure the area as seen with other injuries.

While most of this appears to be doom and gloom, a lot of this does not necessarily apply to Stingley. Looking at everything in context, most players who suffer a Lisfranc injury return to play. There is conflicting evidence on whether performance is affected upon returning and it may be most notable in the first year. He is entering the NFL, a higher level of competition; it would be expected that his level of play may not translate immediately anyway.

Stingley is considered one of the top cornerback prospects in the draft. The draft position noted above is nearly one draft round different with regard to selection placement. The drafted rounds noted on average were early versus late fourth rounds. Those with a residual >2 mm joint displacement were taken on average in the fifth round. These numbers also include undrafted players.

Derek Stingely Jr. does not fit into any of these categories based on scouting reports.

Considering his potential stardom in the NFL, he likely had the procedure done by a top doctor and has been closely monitored during his recovery. Concerns about post-traumatic arthritis on an average of 11 years after the injury are slightly over 50 percent, basically a coin flip, even after a decade. Overall, he missed a total of 13 games over his collegiate career, but 10 of those games occurred after his foot surgery, allowing him to prepare for the NFL Draft.

Stingley backed up his healing and rehab at his pro day, posting a 4.37 40-yard dash and 38.5-inch vertical jump on April 6th. His 3-cone drill was 7.0 seconds, the 20-yard shuttle was 4.19 seconds, and the broad jump was 10-2 feet. He went on to state that he was cleared to do full-speed workouts three weeks prior which further supports why he did not test at the NFL Combine. None of those numbers broke records, but they are in the ballpark of where an elite prospect should be based on past history.

Looking at all the research and information in context, I like Derek Stingley Jr if he can get to the Buffalo Bills at pick 25. I don’t believe he will fall that far based on the information above. It’s possible another team’s medical staff sees something they don’t like and picks another player, allowing him to drop or if there is a run on another position. One possibility to grab Stingely is that the Bills package some players and picks to move up in the draft.

However, if they do that, I would rather them go after Cincinnati CB Ahmad “Sauce” Gardner. He appears to be a better talent and has more potential upside. On top of it, he was known for not allowing a touchdown during his career and barely having any injuries. He only missed the Peach Bowl against Georgia following the 2020 season due to a back injury suffered during warmups.

If they attempt that and fail, a consolation prize could be Stingley. He will be nearly fully healed by the time Week 1 kicks off and can contribute immediately. Every player is at risk for injury at any moment, but I don’t get the sense that Stingley will be at any greater risk due to his injury history.

The Buffalo Bills need a cornerback with the uncertainty of CB Tre’Davious White’s return-to-play timeline. He will return, but he won’t be performing at an All-Pro level immediately. He is also getting older and they should be looking to obtain a top talent at cornerback to pair with White for the next several years to help keep the position young and developing.

They haven’t drafted for need in past years, but this may be a time when they need to pick an elite talent at an initial low cost. Stingley could be a Bill, but it’s whether they want to catch him if he starts to fall down the board. There are likely a lot of teams that have a similar mindset. He won’t fall out of the first round, but he may fall a few slots to make moving up a worthwhile investment.