John Metchie III is the latest star wide receiver to pass through Alabama’s storied program and onto potential NFL stardom. He saw a progressive role increase during his three seasons with the Crimson Tide, helping the team claim the National Championship during the 2020 season. Metchie was well on his way in securing back-to-back national championship appearances before a left ACL tear prematurely ended his season.

Other than the ACL tear that he is rehabbing, Metchie comes with some additional injuries and issues that could affect his draft stock. Below are all the injury concerns and whether he should be selected by the Buffalo Bills.

Metchie appeared in 30 games during his time at Alabama, breaking out as one of the team’s top receivers in his sophomore year. In 2021, he collected 96 receptions for 1,142 yards and eight touchdowns. This was rewarded with a second-team All-SEC selection despite suffering a left ACL tear in the SEC Championship game. This resulted in him missing the final two games of the semi-final and the National Championship games as he recovered.

Along with the ACL tear, Metchie also suffered ankle/hip injuries that lingered from the 2020 college football playoffs. These injuries did limit him during spring practices but did not have any lingering issues heading into the 2021 season.

Details of the hip and knee injuries recently emerged specifying that he dealt with a hip impingement though the side was not specified. As for the ankle, there was a stress fracture in his shin, side also not specified, very likely down on the distal portion of the tibia which is why it’s classified as an ankle.

In addition, when he was 14 during his freshman year of high school, Metchie suffered a hard blow to his chest which rapidly increased his heart rate and it did not come down. Further examination revealed that he had a heart murmur due to cardiomegaly or enlarged heart which forced him out of football for a year.

Below are further details of each injury with their corresponding anatomy.

The ACL is a ligament that runs lateral to medial and prevents anterior translation of the femur over the tibia. This ligament assists with rotational stability by preventing the knee from rotating at the tibia, ensuring that the knee acts as a hinge joint. The ACL contains mechanoreceptors that assist with detecting changes in direction, speed, and tension. It is the most commonly-torn ligament in the knee during sporting activities.

Causes for injury include a sudden change of direction, jumping, poor landing, deceleration, or direct blows to the area. There is usually, but not always, associated damage to the area during an ACL tear, including damage to the meniscus, articular cartilage, and MCL. Damage to the PCL and LCL is also possible, along with nerve and vascular damage in severe knee injuries. Recoveries for an ACL tear vary between 9-12 months but can take even longer with associated damage, as mentioned above.

Metchie had publicly stated that he expects to be cleared by June and not miss any training camp.

Alabama WR John Metchie III says that he expects to be cleared from ACL surgery in June, making training camp and a full rookie season a possibility. pic.twitter.com/fT89P2KmVf

This is an incredibly aggressive timeline due to his December tear. By June when minicamp opens, he will be seven months removed from surgery. As mentioned above, this can take anywhere from 9-12 months to return to play.

Week 1 could potentially be in play, but this is still a very optimistic timeline. To learn more about the latest techniques that may be allowing Metchie to return faster, please read fellow Alabama WR Jameson Williams article.

Various reports have stated that Metchie required surgery on the injured ankle that he played half the season on. It isn’t clear what procedure he required, but in an interview with Yahoo Sports, Metchie clarified that he had a stress fracture in his shin. Looking at the picture below, specifically the anterior tibial cortex in the uppermost triangle, this is where he could have suffered a stress fracture which is an area of high risk. Considering how close it is to the ankle joint, this could be why the phrasing of shin and ankle have been interchangeable based on sources. There is a distinct possibility that he also had a concurrent ankle injury, but not confirmed. 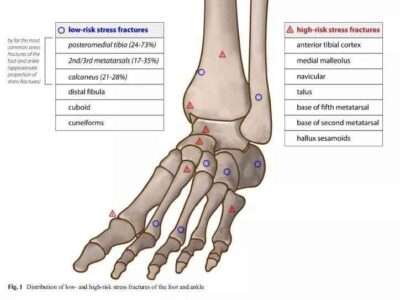 The stress fracture may have been due to overuse throughout the season. Metchie may have been dealing with shin splints at the beginning of the season that progressively worsened to the point where a stress fracture developed. Metchie admitted that he did not practice much during the week in order to prepare for games late in the season. He was limited during spring practices following the procedures but was able to return for the 2021 season to full health.

In order for the hip to function, numerous muscles attach to the surrounding areas that allow the hip to perform flexion, abduction, adduction, extension, internal rotation, and external rotation. These functions allow the human body to do nearly everything imaginable in our day-to-day lives.

Hip impingement or femoroacetabular impingement is the result of bone spurs in the joint area due to the result of the bones not forming normally as a child. This typically isn’t a problem for most people unless they experience symptoms such as pain/stabbing or fatigue in the area. Athletics such as turning, twisting, or squatting that stress the hip joint can make this more prevalent and an issue.

The heart is made up of four chambers: two atria and two ventricles. The right atrium brings in deoxygenated blood from the veins, emptying into the right ventricle, which in turn passes it through the lungs to be oxygenated. Blood then returns from the lungs, entering the left atrium before emptying into the left ventricle, which then pumps it out through the aorta and to the rest of the body via the arteries.

An enlarged heart, or cardiomegaly, is a condition in which the heart grows in size due to various demands and stresses. In healthy athletes, the heart does increase in size to accommodate for the increases in activity demands and is usually not a concern. However, in health-compromised individuals, an enlarged heart can be the result of high blood pressure or coronary artery disease, which increases the likelihood for diagnosis of conditions such as congestive heart failure, blood clots, or heart attacks.

As the result of an enlarged heart, the left ventricle and septum thicken. The left ventricle fills up with blood, but the extra stretch of the muscle prevents an efficient contraction of blood out to the body, and as a result, blood gets backed up. When the chamber is backed up and stretched out, it also weakens the valves separating the chambers. So instead of a strong contraction between valve opening/closing, the valves are not closing fully, leading to further backflow.

When the heart is not pumping effectively, the body does not get a sufficient supply of oxygenated blood and problems begin to occur over time. In order to counteract the decrease in blood pumped out, the blood pressure is raised, which puts further stress on the heart. In addition, coronary artery disease occurs when the arteries around the heart become damaged due to clogs and lack of effective blood flow, leading to the cardiac muscle not getting oxygen and not working as efficiently.

Accounting for the fact that the cardiomegaly was found when he was 14 and he is now 21, this appears to be a minor issue. Metchie did undergo an electrocardiogram along with an echocardiogram at the combine as part of routine testing. This along with his prior medical records likely showed that his heart was operating normally. As of publication, there have not been any reports that have flagged him with a heart issue as it has for past combine participants such as Montez Sweat or Maurice Hurst.

John Metchie has multiple injuries over the past several years that give some cause for concern. Going in chronological order, his enlarged heart would be the first concern. It appears as though routine testing and time elapsed from the initial incident make this issue a footnote. As long as everything is checked out which it sounds like it did, then there are no worries moving forward.

Addressing the hip and ankle/shin injuries next, there is some carryover for further injury. It isn’t clear which hip required surgical correction. It’s very possible that he could have the same issue in the other hip and eventually requires a future surgery there as well. However, even if it is present, a preventative surgery would not be advised. If there is no present issue, there is no need to go in and “fix” the issue. The surgically addressed hip is not concerning in itself.

His ankle/shin issue that resulted in a stress fracture could lead to further repeated stress fractures in the area or at the very least, shin splints. This would be the result of overworking the area with too much running or a sudden increase in workload. Biomechanical movements could also be considered with regards to how his running pattern is or training surfaces. Load management and proper nutrition could help mitigate the recurrence of this issue. The Bills have done pretty well in this area with load management and traditionally have not rushed guys back sooner from injury than they should.

Finally, his ACL recovery is the biggest and most recent issue. Metchie is still at higher risk to re-tear due to being under age 25 as that is a significant risk factor for future injury. For the next two years, there is also a chance to tear the opposite side upwards of 25 percent. This is compared to a nine percent chance when compared to a control group of players entering the NFL.

Considering the tear was on December 5th and he had surgery five days later, he is just over three months out from surgery from time of publication. A tight timeline puts him to potentially return for Week 1, though I doubt most NFL teams would allow him to return that quickly. It’s highly unlikely the Bills would allow this. Much like his teammate Jameson Williams, he could return as quickly as midseason and take the time to adjust to the NFL.

John Metchie has been projected all over the board the first two days of the draft, but is not someone the Bills should go chasing. The Bills front office has traditionally been conservative when it comes to selecting injured players in the first round. If they get a wide receiver in the first round, then Metchie would not be worth going after.

However, Metchie could be worth a selection if the team elects to address another position earlier. If Metchie falls, he could be an excellent selection in round three. This appears to be the sweet spot between injury risk and talent; this is where Metchie falls at currently.

A first-round pick should be used for someone who will knowingly be around and can contribute when healthy. A second or third-rounder can be a solid contributor, but should not be waiting in the wings like Metchie would have to if selected by the Bills.

John Metchie is worth a selection by the Buffalo Bills, but only if he is available in round three or later. He carries a little too much risk if I were picking to select him any sooner. If picked, there is ample opportunity to use 2022 as a redshirt year to prepare for 2023 as the wide receiver room turns over within the Buffalo Bills.