The Buffalo Bills, on the doorstep of greatness, will need to use the 25th pick in the 2022 NFL Draft to select a player that can not only play immediately but can also provide effective results in high-pressure moments. A position of need is at cornerback with several notable players that could be available in the first round including Clemson CB Andrew Booth Jr.

The physical corner has the size and speed metrics that the Bills are looking for in a corner similar to others already on the team. But Booth carries a notable injury history that is worth looking at to ensure that if the Bills select him at pick 25, there won’t be buyer’s remorse.

2021 – Left Hamstring strain – 10/15, Suffered in pregame warmups prior to Syracuse, had it wrapped prior to the game, missed one game against Syracuse

2021 – Stinger – 11/06, Suffered hit vs Louisville, placed in concussion protocol as a precaution, missed one game against UConn

2022 — Quadriceps strain — Suffered a Grade 2 strain while training for NFL combine, skipped the combine as a result

2022 — Core muscle repair — Unclear when it happened, missed Clemson’s pro day, had surgery week of March 20, Double hernia according to Dane Brugler of The Athletic

Booth dealt with Osgood-Schlatter’s disease in high school which caused pain and swelling in the area during athletics. While it is referred to as a disease, it is more of a temporary issue that is commonly seen in adolescence going through growth spurts. 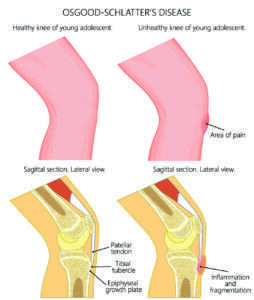 This is characterized as knee pain just inferior to the kneecap where the patellar tendon attaches to the tibial tubercle on the tibia. There is a visible, palpable bump where the tendon connects at the tubercle This is more commonly seen in athletes that run and jump, for example, in football and basketball. This is due to the adolescent population being skeletally immature as they go through growth spurts in puberty and as they age. This can occur in one or both knees during adolescence.

This is addressed through stretching, icing, activity modification, and resting to reduce symptoms and overuse in the knee. Avoiding playing into the pain and bracing or taping the knee can help manage symptoms, but this is an issue that simply goes away as the individual ages.

Unfortunately, Booth later developed knee tendinitis in high school despite the prior condition going away. Tendinitis is a condition in which there are microtears in the tendon which is the tissue that connects the bone to the muscle. Over time, the tendon develops microtears due to overuse due to a sudden increase in training or a direct blow to the area.

While healing, the body attempts to heal the area by laying down scar tissue. Unfortunately, scar tissue heals in a haphazard manner instead of the normal linear striations seen in muscle and tendons, such as a steak. When the tendon is acted upon as the anchor to the bone, the anchor is no longer as strong or can pull as evenly. This can place further stress on the tendon causing pain, swelling, and progressive weakening of the tendon over time. 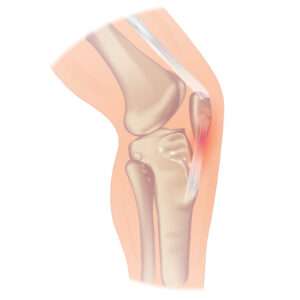 Based on the timeline above, Booth played with knee tendonitis for at least two years during a portion of high school and through his college freshman year. It’s not clear whether the tendonitis progressed to a point where there was a partial tear in his patellar tendon or this was a separate injury, but having tendonitis put him at higher risk for a tendon tear. 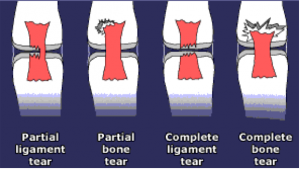 Based on the wording from this article, it appears as though the patellar tendonitis progressed to the partial patellar tendon tear. They specifically mention the Louisville game on October 19th, the seventh game of a 15-game season. He stated that his knee felt no better than 80 percent, playing 13 games, mostly on special teams. He finished the season with a loss in the National Championship to LSU before undergoing surgery to repair the tear.

Furthermore, performance and games played following a patellar tendon repair are decreased in the first season but recovered to baseline values in seasons two and three. Booth suffered this injury in 2020 and continued to play at an incredibly high level in 2020 and even better performance in 2021.

Fortunately, he was able to recover fully to start the season as he transitioned into more of a starting role, appearing in 21 games over the next two seasons, missing only three games total due to a thigh contusion in 2020 and a hamstring strain and stinger in 2021.

Following his junior season, Booth declared for the NFL draft and began preparing for the NFL Combine before a Grade 2 quadriceps strain prevented him from participating in drills. This injury occurred as the result of training in early February, but it was reported that this was a minor injury and that it would not hinder him.

Interestingly, a month later, it was announced that Booth would miss Clemson’s pro day on March 17th. He instead underwent surgery for a core muscle repair, otherwise known as a sports hernia. It’s not clear when he suffered the injury, though I don’t believe the quadriceps strain caused the core muscle injury. However, it’s possible that he could have been having what felt like a quadricep strain when in reality he suffered a core muscle injury.

What likely occurred was that he was not getting better from what appeared to be the quadriceps strain which necessitated further testing. This is where they discovered the core muscle injury.

A core muscle injury is when the tissues near the groin tear and do not heal like a normal strain, commonly with the muscle pulling away from the pubic bone attachment observed in the picture. These injuries can present as groin strains, oblique strains, or other general injuries around the hip or core region that don’t resolve with proper rest and rehab.

These injuries can occur with planting the feet & twisting maximally, causing the lower-body injury. They can also occur with violent twisting, kicking, and turning along with blows to the back, anything that overstretched or strains the muscle at its attachment.

This can present as sharp or stabbing pains with specific movements such as sprinting, kicking, cutting, etc. This can also be tender to touch, with little to no pain during rest, and typically isolated to one side. These injuries aren’t always apparent at the time; often minor injuries are able to be played through. The severity of the injury is found later such as during a physical or if the pain becomes too intense to perform an activity.

Fortunately, surgical outcomes are great with nearly 95% of repairs in the NFL have shown to resume their normal activities prior to the injury with the control group playing slightly more games and slightly longer careers than those having the surgery. One study did go on to note that players with repairs had careers that were six months shorter and played two fewer games.

It’s worth noting that Dane Brugler of The Athletic reported that he suffered a double sports hernia, but there are not any corresponding independent reports to verify that it was that severe.

Booth had surgery the week of March 20th with Dr. William Meyers of the Vincera Institute out of Philadelphia. Dr. Meyers is the leading expert in core muscle repairs in the country and considering Booth’s draft prospects, it’s not surprising he went there.

Clemson CB Andrew Booth Jr., a projected first-round pick, recently underwent sports hernia surgery with Dr. Williams Meyers in Philadelphia but still is expected to be ready for the start of training camp, per league sources.

Regardless of where he is drafted, Booth will unlikely be available to participate in most of OTAs in the off-season. Mandatory minicamp could be in play, but considering it is only three days, it may be best to hold off on participation.

Andrew Booth Jr. has had a variety of injuries dating back to high school that, at face value, could lead to some concerns. Looking at potential issues, the hamstring strain, thigh contusion, and the stinger all appear to be one-off issues. The stinger will likely have imaging of the area to ensure that there are not any underlying issues such as a herniated or bulging disc that could cause problems later.

The Osgood-Schlatter’s, tendonitis, and patellar tendon tear were over two years ago and have been surgically addressed. As long as the patellar tendon appears fully healthy and intact, there is some minor concern, but significantly less since this was several years ago.

There are case studies of individuals retearing their patellar tendon repair, but these are fairly rare and there does not appear to be data to suggest that he is at any higher risk to suffer a further injury because of the prior one. He has also shown the ability to elevate his play over the last two seasons, with performance notably suffering after an injury of this magnitude as mentioned above.

As for his core muscle repair, the Buffalo Bills did have him in for a Top-30 visit recently. This was likely to assess his recovery and check for the other remaining medical concerns listed above.

Even if his core muscle repair was for a repair on both sides of the groin as the double hernia report states, there is little concern moving forward. Current Bills including Mitch Morse, Ed Oliver, Jerry Hughes, and former Bills Cole Beasley and Tyrod Taylor all required repairs within the last few years with overwhelming success.

The only Buffalo Bill in recent memory to have a core muscle injury that did not succeed was former WR Kolby Listenbee. He suffered a double sports hernia while at TCU, playing through the injury and receiving multiple corticosteroids to manage the pain. Despite the pain and limited ability, he still ran a 4.39 at the Combine which allowed him to get drafted in the sixth round in 2016.

He required several surgeries in the area to address the issue but never saw any actual NFL snaps. He was released in 2017, spending time with Miami and Indianapolis before getting waived and leaving football. The issue with Listenbee was that the injury was so severe and allegedly treated improperly, leading to damage that surgery simply could not correct.

Considering the overall success of the core muscle repair and the familiarity that the medical staff has with it, there is a slight concern for Booth to not return to form. However, significantly less concerned than other potential injuries.

As long as the neck, right knee, and most importantly, the core muscle repair check out, then there is no hesitation in selecting him at pick 25 in the first round.

There are certainly other more talented cornerbacks the Bills can go after or other positional needs. If he made their big board, this injury history does not concern me that they are taking a risk. He missed only three games in his collegiate career and has shown the ability to play through injuries. The only hesitation may be whether they are durability questions which may come down to team preference on how they view him.

When putting the injury into context and on a timeline, this shows that Andrew Booth can play at a high level, be productive, and minimize time missed. He is certainly a player that has a strong potential to be there in the late first round or if teams are spooked, a slam dunk pick in the second round.

This injury may suppress his draft stock but may allow the Bills to get a top prospect in the first round while avoiding giving up draft capital.