With the Super Bowl window as wide open as it possibly can be for the Buffalo Bills heading into the 2022 season, they will be looking to add playmakers to support QB Josh Allen. A potential target for the Bills is Clemson WR Justyn Ross.

Over 39 games and four years in the orange and purple, Ross caught 158 passes for 2,379 yards and 20 touchdowns. During his first two seasons as a Tiger, he was a vital piece of the offense as the team appeared in back-to-back National Championship games, winning over Alabama before losing the next year to LSU.

Just as quickly as success found Ross, it was nearly all taken away from him due to a congenital neck issue that nearly forced him to medically retire in 2020. After some uncertainty regarding his career, he was able to return to the field in 2021 to set himself up for a potential payday in the NFL draft.

Ross has a diverse and concerning medical history greater than the neck issue that cost him a year of his collegiate career. Below is a complete publicly known breakdown of each injury Ross sustained dating back to high school and what this could mean for his draft stock and the Bills’ interest.

2020 – Congenital neck fusion, originally suffered stinger in practice in March, had a prior history of stingers, missed the entire Junior year. Also dealt with a bulging disc within the neck

2021 – Stress fracture foot, side not specified — aggravated against UConn, had been playing with it all season, originally suffered in preseason, missed three games senior year. Required surgery to correct

As seen above, Ross has quite an extensive injury history dating back to his sophomore year of high school. While the injuries do vary in severity and time missed, several injuries are concerning and warrant a further look.

Working in chronological order with regards to his injuries, his MCL sprain suffered in the football playoffs likely led to him missing the following game which ended his season. He suffered the ACL injury several weeks later playing basketball, though the details of how he injured the knee are not available. It’s highly likely that his MCL sprain may have contributed to the ACL tear due to the prior laxity in the joint when he either attempted to cut on the right knee or when he landed, causing the tear. 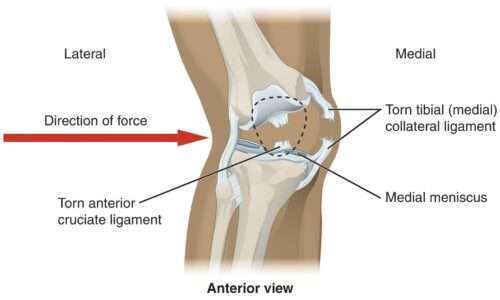 He ultimately had surgery to repair the knee a month later and from what is available publicly, he did not appear to miss any time during his junior and senior years of high school. It’s worth noting that this was his only knee injury in his career. By the time the 2022 NFL season starts, he will be over 6.5 years removed from the ACL injury which puts him quite low with regards to risk factors in suffering a future tear either on the same side or opposite side.

In the spring of 2020, Ross began participating in spring football when he suffered a stinger in practice. According to multiple sources, he had a history of them but appeared to have problems following that most recent instance.

Imaging was performed to determine if there was a further underlying cause of the after-effects of the injury and doctors discovered a congenital fusion of two of his cervical vertebrae. This is where two vertebrae in the neck are naturally connected together from birth. According to research, this is a rare event with an incidence of 0.4-0.7 percent with no differentiation of sex. 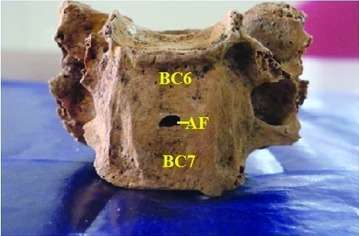 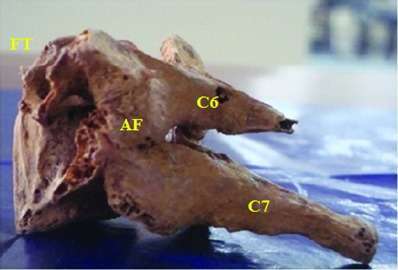 These fusions are most common at C2-C3 followed by C5-C6, L4-L5, and thoracic vertebrae. Considering that Ross had multiple stingers throughout high school and college, it’s possible that the congenital fusion for Ross was at C6-C7. This is one of the levels where compression of the nerve in the neck can cause shock symptoms seen down the arm. 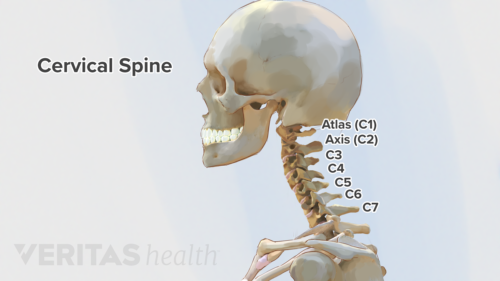 If it was higher at C2-C3 where it is more commonly seen, then there is far more concern for paralysis or death due to where the vagus nerve comes off the spinal cord. This is the nerve that innervates the diaphragm, allowing an individual to breathe. It also controls organ function, respiratory rate, heart rate along with coughing, sneezing, swallowing, and vomiting. If an individual loses any of those functions, then the ability to survive is severely compromised. 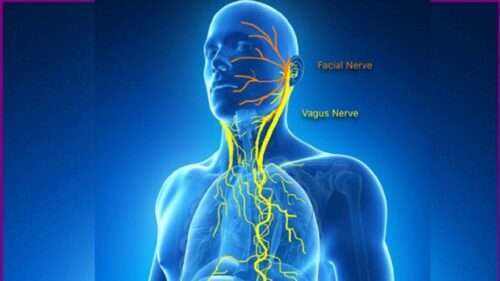 It’s also important to note that he did have a bulging disc when they found the congenital fusion. However, it’s not clear at what level the bulging disc was at or whether this was the primary area causing the stingers. 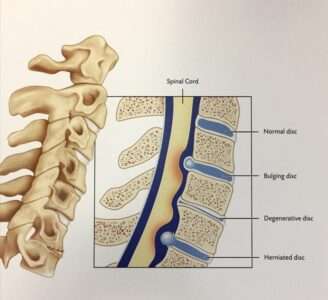 Congenital fusions if not managed properly can cause problems as an individual ages. Compression of the nerves can worsen causing weakness/paralysis. Playing contact sports can also put the spinal cord or vertebral arteries at risk for damage if they become damaged, leading to paralysis or stroke.

Shortly after finding out that he had this condition, he required surgery to correct the issue. Based on reports and the wording of Clemson HC Dabo Swinney, he required a fusion to stabilize the area where the bulging disc was potentially above or below the vertebrae level. 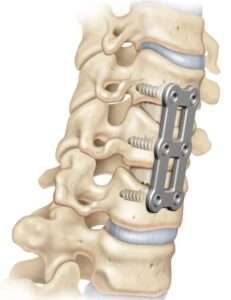 It’s possible he may have also had a procedure done around the congenital fusion if there were concurrent issues such as nerve compression. This could have required a foraminotomy to create space around the spinal nerves exiting off the spinal cord. However, reports aren’t specific enough to identify everything completed within the neck during surgery. 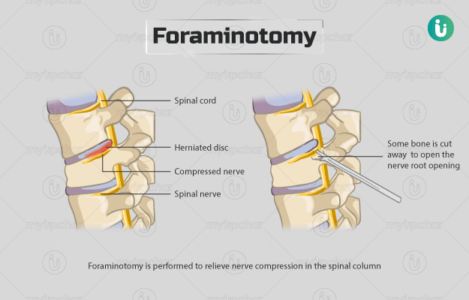 Example of a foraminotomy. Credit: Myupchar.com

These rehab protocols for a fusion carry a timeline upwards of six months with some taking upwards of nine months. Considering the unique nature of the condition and possible location, doctors were extra cautious to ensure that he did not suffer any additional damage by returning too soon. This cost him the 2020 season, but once he was cleared to play, he returned for the 2021 season.

However, his 2021 season was not without injury. During the preseason, Ross suffered a stress fracture in his foot that he played 10 games on before aggravating the injury against the UConn Huskies back in mid-November. Reports later indicated that he required surgery that required a screw to stabilize the fracture in the fifth metatarsal which suggests that this may have been a Jones fracture. 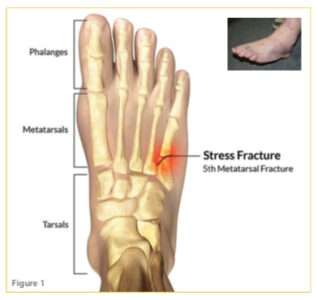 It hasn’t been clarified when he had the surgery, but it’s very possible he had the procedure shortly after aggravating the injury as head coach Dabo Swinney noted that Ross could have potentially returned to play in a bowl game. However, Ross had made up his mind in declaring and would have rather started on the rehab and training process for the NFL Combine.

Justyn Ross’ injury history concerns me. There are several worrisome injuries that could lead to extended absences early on in his career. His neck injury is worth further scrutiny, especially with the prior bulging disc, congenital fusion, and surgery. The recent foot injury doesn’t reduce any concerns looking at him as a whole, especially heading to a higher level of competition.

There are several red flags that would knock him down a draft board including how his foot is healing as he goes through the draft process. Knowing the specifics of the neck procedure would help a lot as well regarding what levels are affected.

Returning from a single-level cervical fusion may lead to fewer games played in the NFL, but overall has no bearing on performance. Fortunately, there are no differences for the Jones fracture regarding performance and availability when transitioning from college to the NFL.

However, in athletes that do require a cervical fusion, 10 percent of those require additional surgery at the cervical level above or below due to degeneration and lack of mobility at the prior fusion site. It is a relative contraindication to continue contact sports if there are multi-level fusions (>3) within the neck. He has the congenital fusion and presumably another one where the bulging disc was located at. He now would have two places that would limit his cervical mobility. He can still play, but he may be close to where there is a safe limit for him to continue playing.

If he has another hit or injury to the area, there is a potential to require further surgeries. Former Bills S Aaron Williams is a perfect example of this timeline. He had two serious neck injuries while with the Bills. The first one was the result of a tackle on New England Patriots WR Julian Edelman that caused him to suffer a nasty stinger that sent him to IR.

Upon further testing, doctors found that the space between his cervical vertebrae was narrow, causing the spinal nerves to become pinched easier than most others. As a result, he required a foraminotomy to create space at C4-C5 to relieve the pressure on the spinal nerves. Regrettably, players that require a foraminotomy usually require another procedure 50 percent of the time later.

After returning the following season, he later suffered a vicious hit from WR Jarvis Landry in 2016, ending his career. He explicitly stated that teams wouldn’t sign him due to his neck injuries and those didn’t include fusions, which is what Ross is dealing with in some form.

Overall, while the research is favorable for all injuries when looked at individually to perform in the NFL, I also worry about the culmination of injuries. He has suffered major injuries at every level of football and I don’t believe that this trend will change once he reaches the NFL. Adjusting to a higher level of competition with his history may lead to further injury, meaning less time on the field. He is certainly worth a draft selection, that is not debatable, but using a premium pick on him is questionable.

All it takes is one team to fall in love with a player, but the Bills should not be falling in love with him in the first or second round. I don’t even like him in the third round and I could see him dropping down to early Day 3 somewhere. Possibly then the Bills could take him, minimizing their risk.

The Bills under Sean McDermott and Brandon Beane have been conservative in picking players regarding their injuries early on and taking risks as the draft boards progress. If he is asked to play early and often, I could see the heavy workload causing breakdown and injuries that could potentially be nagging, limiting his production. They may also see him as not worth the risk considering the concerns and question how long he will last in the NFL.

Past injuries do not always predict a poor NFL career, but Justyn Ross needs to be drafted to a team that focuses heavily on managing workloads and has a steady training staff in place. The Bills do have both of those qualifiers, but they cannot waste top draft capital on players that have injury risks on this level. He could be a true talent at the NFL level and have a productive career despite all of this. Regrettably, I’m not certain that the Bills should be investing their resources into him given the concerns.