Possibly one of the best players in the 2022 NFL draft, Notre Dame S Kyle Hamilton appears ready to immediately produce wherever he is selected. However, despite Hamilton’s elite play, he missed a significant portion of his senior season with a right knee injury that could give some teams pause in selecting him.

With the Buffalo Bills picking at 25, all options have to be in play to ensure their Super Bowl window stays open as long as possible. Digging into Hamilton’s injury history will determine whether there are any lingering concerns from his knee injury and other issues that could limit him as he transitions to the NFL.

2014 – Undisclosed – Jr. High. Hamilton had an injury in 8th grade, but no diagnosis was ever reported.

2018 – Hip injury – High School. Hamilton injured his hip while diving for a loose ball while playing basketball. The article reports that he “blew out his IT band.”

2018 – Left Pinky Dislocation – Highschool. Hamilton played through an entire 7-on-7 tournament after dislocating his pinky in practice.

2020 – Left Low Ankle Sprain – 9/12 vs Duke. Rolled up while attempting to secure a fumble, Hamilton missed the next game (USF) before returning and playing every other game of the season.

2021 – Ankle surgery – In the spring of 2021, Hamilton underwent a minor ankle procedure, missing some of Notre Dame’s spring practices.

Half of Hamilton’s publicly known injury history comes from high school which is worth noting. Hamilton suffered an undisclosed injury in eighth grade back in 2014 that didn’t have any further details but was mentioned in the same article as his right wrist fracture during his freshman year.

According to reports, he suffered a right wrist fracture which prevented him from continuing to play quarterback. It’s not clear what bone he broke in his wrist whether it was one of the carpals or the distal portion of the radius.  He was still able to play with a hard cast on to return punts, but the fracture allowed him to focus on the defensive side of the ball.

This injury also forced him to begin making decisions on his future as he began receiving basketball scholarships. He decided to begin to focus on football which looking in retrospect, appears to have been the correct choice.

Unfortunately, his high school injuries were not over as he suffered two injuries during his junior and senior years. In 2017 or 2018, he “blew out his IT band” while diving for a loose ball during a basketball game that appeared to keep him out a significant portion of the season. The article went on to state that this prevented him from building on his frame during the offseason.

However, the wording in the article confuses me as a Physical Therapist. You don’t “blow out your IT band”. The IT band is a thick fibrous band of tissue that connects from the iliac crest of the hip down to the lateral tibial plateau known as Grady’s tubercle. It is thought to act as a lateral stabilizer of the hip, but recent research has potentially found it to assist with making walking more efficient. 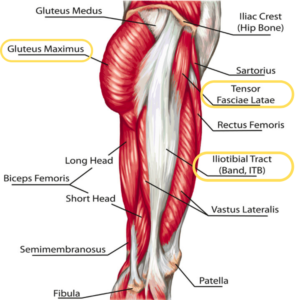 Anatomy of the IT band. Credit: Revivesportspine.com

What may have happened was that he injured the hip or the tensor fascia lata which is part of the proximal portion of the IT band at the proximal portion near the hip. While not a primary mover, it does assist with hip flexion, abduction, and internal rotation. It’s very possible he injured his hip which would make more sense considering how he dove for the ball.

It’s far easier to classify this as a hip injury with potentially poor wording from the journalist. There are case studies of people requiring surgery to fix the tensor fascia lata, but this is rather uncommon. I believe that if he suffered an injury of that magnitude, it would require more detailed reporting than a passing sentence. Either way, every injury is always worth noting.

He was able to return during the summer to play in The Opening Finals, which is Nike’s annual top recruiting event for football players every year. This event is seven-on-seven football and he did exceptionally well despite dislocating his fifth digit or pinky on his left hand. He likely taped the finger to his ring finger and finished the event, still drawing the attention of a lot of Power 5 schools.

He ultimately played in the 2019 All-American Bowl and committed to Notre Dame, playing in all 13 games during his true freshman season. There is no concern with the finger injury as finger dislocations occur often in football. They are simply a part of the game and considering he plays defense, there is much less of a concern than if he was having to throw or catch the ball.

Hamilton managed to avoid any publicly known injuries his freshman year but suffered a left ankle injury early in his sophomore season. He suffered a left low ankle sprain while playing Duke in the season opener, getting rolled up on trying to recover a fumble. 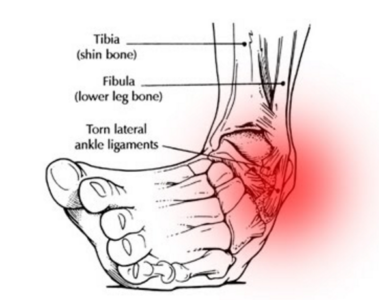 He missed the following week against the University of South Florida and then had the benefit of back-to-back bye weeks to fully heal, getting nearly a month off. Based on the wording of the articles, this didn’t appear to be anything more than a low ankle sprain and he finished out the season.

However, in the offseason, he did require a minor procedure on his ankle that forced him to miss a portion of Notre Dame’s spring practices that began in late March. It isn’t clear why he had the procedure, but it’s possible he required arthroscopic surgery to clear out any loose bodies in the left ankle if these were residual issues from the ankle sprain in September. There are certainly other possibilities as this did keep him out of what looked to be several months if he had the procedure done immediately after the season.

Hamilton’s final collegiate injury came against USC back on October 23rd, 2021 which ended his season. Reports indicated that he landed awkwardly on his right knee and that there was initial concern for a meniscus injury. He later had further testing that revealed that, in the words of head coach Brian Kelly, “a pinched fat pad”.

What Kelly was referring to was one of the fat pads within the knee was being pinched during knee movement, causing pain and swelling. Within the knee are three fat pads: the posterior fat pad, the anterior suprapatellar fat pad, and the infrapatellar fat pad. These fat pads are highly innervated and vascularized, releasing synovial fluid to lubricate the joint and provide cushioning between the articular surfaces. 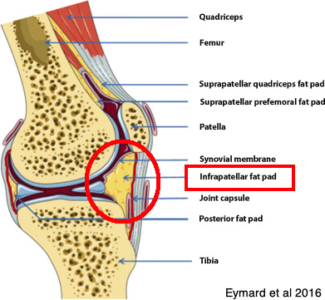 It’s not clear which fat pad was injured, but a strong assumption would be the infrapatellar fat pad based on how the team initially thought he injured his meniscus. As seen in the picture above, the infrapatellar fat pad is the biggest of the three and attaches to the anterior portion of the meniscus. These fat pads can be injured due to microtrauma, major trauma, altered joint mechanics, or patellofemoral instability.

Hamilton likely suffered the knee injury in a similar fashion to that of a meniscus with a twisting of the knee while the foot is planted, leading to a shearing motion. It did state that he landed awkwardly, but if that was the result of the twisting/pivoting motion, that would support that theory.

He possibly had a locking sensation within the knee which had the team suspecting a meniscus tear until imaging showed otherwise. Fat pad impingement is not considered a primary suspected diagnosis which is why there was the possibility of a meniscus injury until imaging was performed. If the fat pad was inflamed enough, it could have limited full extension by getting in the way of the patella when knee movement occurred, similar to what putting a pencil in a door does when it’s trying to close.

His return to play timeline was roughly six weeks, taking him to the end of the season. There was potential to have him return for the bowl games, but he opted out as the Fighting Irish did not make the College Football Playoffs.

During his time away from the field, Hamilton performed physical therapy to allow him to reduce inflammation and restore full function within the knee. Injections were a possibility to help further reduce the pain. Whatever rehab he did appears to work as he was able to work out at both the NFL Combine and Notre Dame’s Pro Day without limitation. He participated in all the running, jumping drills and agility drills, suggesting that the injury was no longer an issue.

Hamilton’s injury history is diverse but overall not as concerning as one may perceive. Half of his injuries were from high school and the other half were relatively minor. He only missed seven games over his four-year collegiate career with six of them occurring due to the knee injury mentioned above.

There are several minor concerns including the full details of the hip injury from high school and ensuring that his right knee does not have any chronic inflammation or issues with his joint mechanics. Knowing what the right ankle surgery was for would also be beneficial, but it doesn’t appear that it was a notable issue.

He has already had a virtual visit with the Buffalo Bills as part of their due diligence and possible interest. Cover 1’s National Scout Russell Brown has him as his fifth overall ranked prospect in his 2022 NFL Draft Guide.

My 2022 NFL Draft Guide has arrived! Months of grinding tape and finding background information on these players to all be compiled in a scouting report. There’s over 165 players on here and the best part is that it’s FREE to download. Enjoy!https://t.co/L38SMrV8K3

As long as there are not any surprises medically that aren’t publicly reported, then the Bills should have no hesitation in selecting him either at pick 25 or if they trade up. He is not dropping out of the first round based on the consensus of scouting reports and could be an excellent addition to the secondary room. This is especially important with the uncertainty of S Jordan Poyer’s contract status and the age of both Poyer and S Micah Hyde. To build for the future while still focusing on the present is a great way to maximize winning potential.

Kyle Hamilton appears to be one of the most complete NFL prospects in this year’s draft and the Buffalo Bills would be incredibly fortunate to select him. He will get injured at some point, that’s inevitable. But despite the several injuries, Hamilton does not exhibit any long-term concerns that could hinder his production at the next level. Wherever he lands, that team should have an excellent, productive, and healthy player for years to come.