The first two weeks of training camp have given Bills Mafia a glimpse into the what the 2022 NFL season might look like for their favorite team. Envisioning what the season might look like is a big part of the fun of the pre-season, and the NFL loves to sell hope this time of year (Hi Detroit!). Predictions are a fool’s errand, so of course I chose this topic. Let’s get into the boldness.

Von Miller Has Fewer than 10 Sacks, and You’ll Be Happy About It

Across nine fully healthy seasons, new defensive end Von Miller has averaged 12.3 sacks/season while playing 82.9% of his team’s defensive snaps. These are numbers of a surefire Hall of Famer. While my partner in crime, Ryan Sullivan, believes the Bills will stray from their traditional rotation to heavily feature Miller, a lower snap count is a big part of this prediction.

The Bills signed the veteran edge rusher to bring a Super Bowl home to Orchard Park, and a healthy, fresh Miller in the playoffs is an integral part of that plan. The 33-year-old could have some of the highest snap percentages we have seen from Buffalo’s pass rushers under McDermott and still not approach his career average. That lower snap count brings fewer opportunities for sacks, resulting in a total shy of what many fans are hoping for from the $120M man.

Fret not though, you’ll be ecstatic when Miller is wreaking havoc on Patrick Mahomes’ life in the playoffs.

After Devin Singletary’s strong finish to the 2021 season, many are viewing “Motor” as the team’s unquestioned RB1. Between Singletary’s final stretch, Moss’ season-long struggles, and the addition of James Cook in the second round of the 2022 NFL Draft, many see an apparently cut and dry scenario where Moss is forced to compete for a roster spot. But don’t count Moss out.

Moss battled an ankle injury all season, and it appeared to actually get worse as the season went on instead of healing. Moss missed Week 1 and had 18 snaps in Week 2, but after that, he had five weeks of more than 40 snaps/gm. Something changed after Week 9 versus Jacksonville, and the 2020 third-round pick missed three more weeks and never had more than 28 snaps the rest of the season. Given Brandon Beane’s comments on how Moss struggled with the injury throughout the season, it is a reasonable guess that Moss was still significantly hampered by his ankle.

Don’t forget that Moss closed out 2020 on high before the ankle injury. In 2020, from Week 14 through the Wild Card game, Moss got 48 carries to Singletary’s 31, and many believed Moss was steamrolling his way to be the lead back in 2021. When both are healthy, Moss and Singletary have each shown they can be productive running backs.

Jump back to 2022. Much has been made of Buffalo’s potential increase in 12 personnel. Maximizing the flexibility of players like Dawson Knox, Reggie Gilliam, and James Cook with diverse formations and pre-snap motion could put serious stress on defenses and create advantageous mismatches. If the Bills do operate out of 12 more often in 2022, Moss could see more snaps and carries in that grouping because he has demonstrated greater effectiveness than Singletary out of it. It is a relatively small sample, but Moss’s 59-percent success rate in 12 personnel significantly outpaces Singletary’s 37-percent. 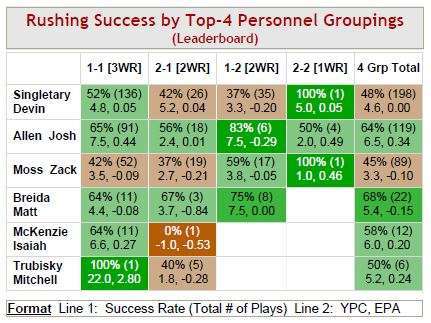 Watch for the Bills to return to a fairly even split between the two backs and James Cook to get a handful of carries but also the vast majority of RB receptions.

It ultimately doesn’t mean much, but I love watching Moss truck 34#PITvsBUF pic.twitter.com/imDPjtiic8

The Bills have not had a pass catching weapon like Cook out of the backfield since Lesean McCoy. Shady caught 59 passes in 2017, and Cook has the potential to finish in that range. Granted, McCoy was the primary offensive weapon on that team, but it was also a much worse offense overall, leading to fewer opportunities than what the 2022 Bills will offer to Cook.

Cook’s speed, route running ability, and versatility will help the Bills create the multiplicity and mismatches they have been talking about all summer.

Since we’re being bold, let’s predict 55 catches for Cook this year, making it one of the best receiving years ever for rookie running backs.

Even without a Super Bowl victory, the 2022 NFL season can still be a success.

No one wants to hear this – that’s what makes it bold – but not winning the Super Bowl doesn’t necessarily mean they had a bad season.

Winning the NFL championship has so much luck involved that the best path is to build a good roster and try to take as many swings as possible. The Bengals gave a great example last year. They made it to the Super Bowl in part because Kansas City inexplicably never adjusted to the 8 men in coverage their defense used often in the second half. Even before that though, the Bengals made it out of the first round versus the Raiders, who largely made the playoffs because Chargers’ first year head Brandon Staley got brain lock in overtime. After beating the Raiders, who were coming of a season of unprecedented turmoil, Cincinnati needed an interception with :20 left to barely beat the Titans. In a single elimination tournament with a funky shaped ball, too many unpredictable events happen to escape luck as a factor.

We have seen bad seasons by bad teams. This is not those times. Unless the Bills completely fall apart and miss the playoffs or the earth gets swallowed by a black hole, they will have as good a shot as anyone at hoisting the Lombardi. That’s the possibility the drought kept from us. We are in a golden age of Bills’ football, and I’ll guarantee one prediction: I’m going to enjoy the ride.