Free preview of our Premium Content. Come be a part of our Crew!!

Offseason training activities are underway for the Buffalo Bills which means it’s time for the staff to introduce their schemes, techniques, and assignments. We are talking installation of their program from the ground up.

These voluntary offseason workouts include individual instruction or group instruction. One of those very moments was caught on film by Heather Prusak. It’s a brief video that appears to mainly be Von Miller giving defensive end Gregory Rousseau some tips, but if you listen and watch the segment closely, you can see that this walkthrough was really to get Miller up to speed.

Here’s an enhanced audio version of the video. Listen closely. Early in the video, you hear one of the coaches call out the play – “Mug, Mug, Spider, Blue.” So what does that mean?!

Mug is telling the linebackers, being played by Jordan Phillips and Coach Frazier, that they are Mugging the A-gaps. This means they are up at the line of scrimmage and standing square in the A-gaps. You can see Matt Milano and Tremaine Edmunds mugging the A-gaps on Taron Johnson’s interception against the Steelers in 2020. 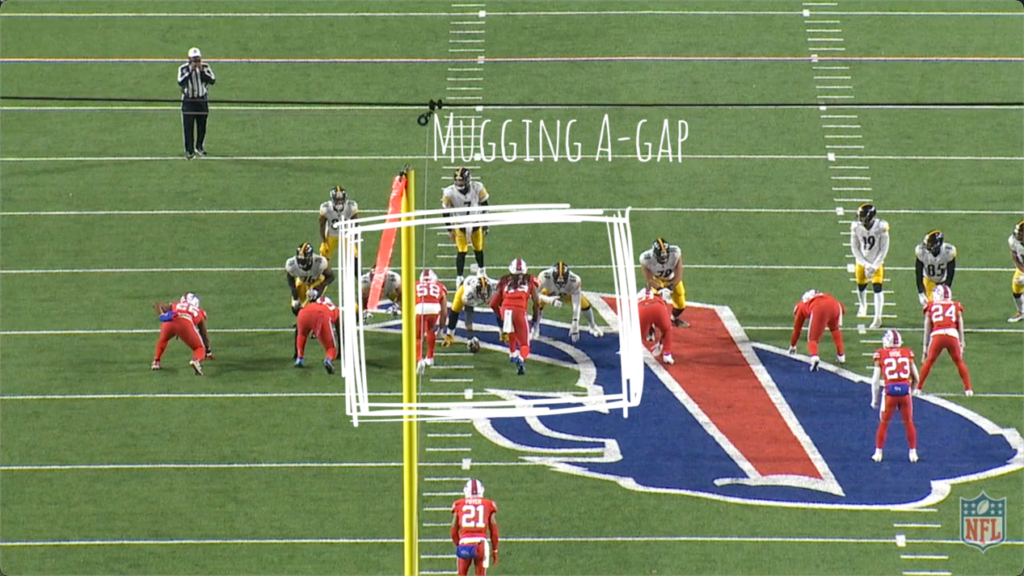 The Bills, like most teams, Mug the A-gaps to put the offensive line in a conundrum. Stay tuned for that. Prior to the snap, the Bills show a single-high Man Coverage look, but as the ball is snapped, the pressure look changes into a Tampa 2 coverage and Taron Johnson picks off QB Roethlisberger and makes a house call.

On that day, the Bills ran this 8 man coverage a lot! pic.twitter.com/jOnafdoIpf

Generally, in 2021, the Bills would pull out Spider in the Red-Zone or against mobile QBs and typically they didn’t have a nose tackle drop into coverage. They would be in an exotic personnel grouping which would have Mario Addison executing the Spider call. So a defender who is a tad more athletic. 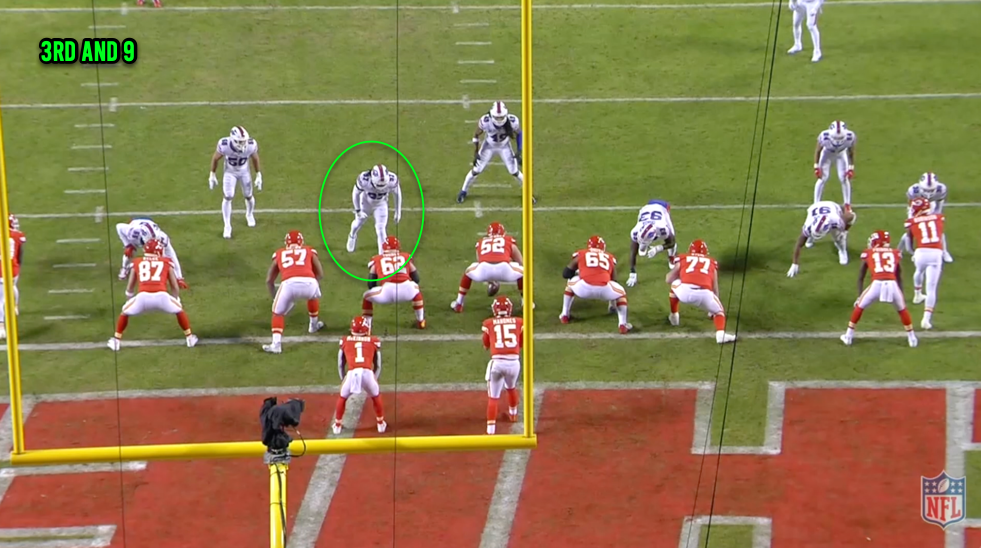 So he would align inside and pretend like he is going to rush the passer, but drop out and become a “Low-Hole” player or “Spy.” 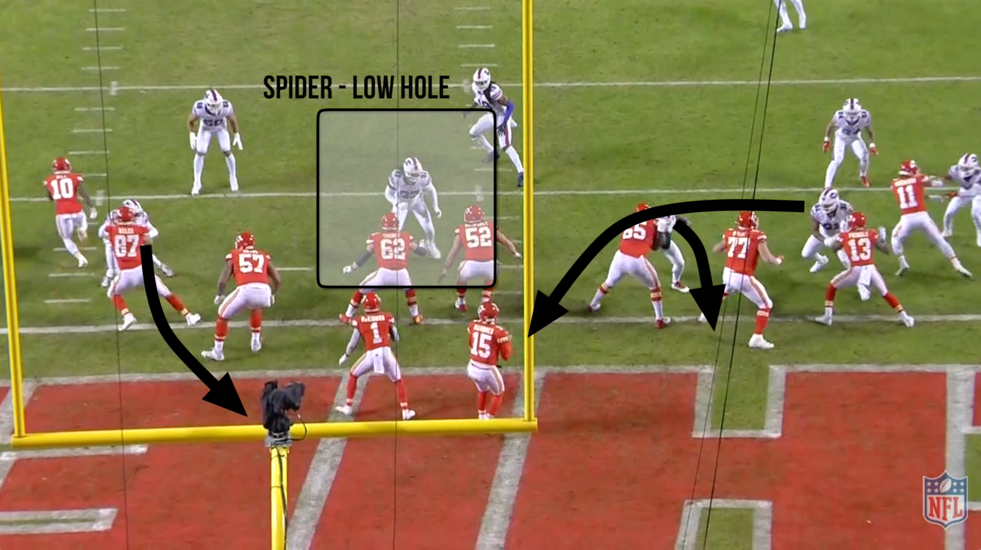 What I love about this play by Addison is that he uses his eyes to hold the guard and the center. He makes them think that he could be rushing right down broadway, and that minor technique allows the game between Efe Obada and Ed Oliver to take shape. Oliver got a free run through the A-gap thanks to Addison’s savviness. 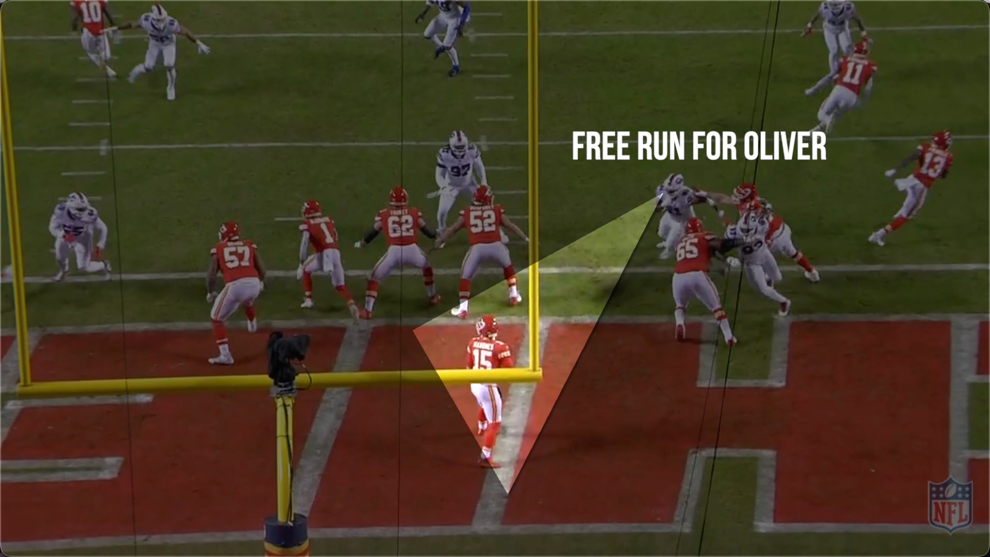 Unfortunately, QB Patrick Mahomes senses the pressure and threw it to TE Travis Kelce. But Milano is there to minimize the gain and force fourth down. Even though the Bills called “Spider,” they still got pressure with three rushers and got off of the field.

As I stated in the prior two plays, “Blue” is the coverage call and typically it is Cover 2 or Tampa 2. Now, this is a little different when the Bills have a “Spider” call or three-man rush because the defense now has eight in coverage. This means that the “Deep hole/wall” player LB Tremaine Edmunds can get deep and essentially play the deep middle. He doesn’t have to worry about check downs or routes just past the line of scrimmage because he has the “Spider” dropping into coverage and helping to defend the “low hole.”

You can hear Coach Frazier say “it’s just like Green,” and you can even see Phillips relaying that information to Miller. “Green” is just telling the defense that they do not have to worry about run fits. 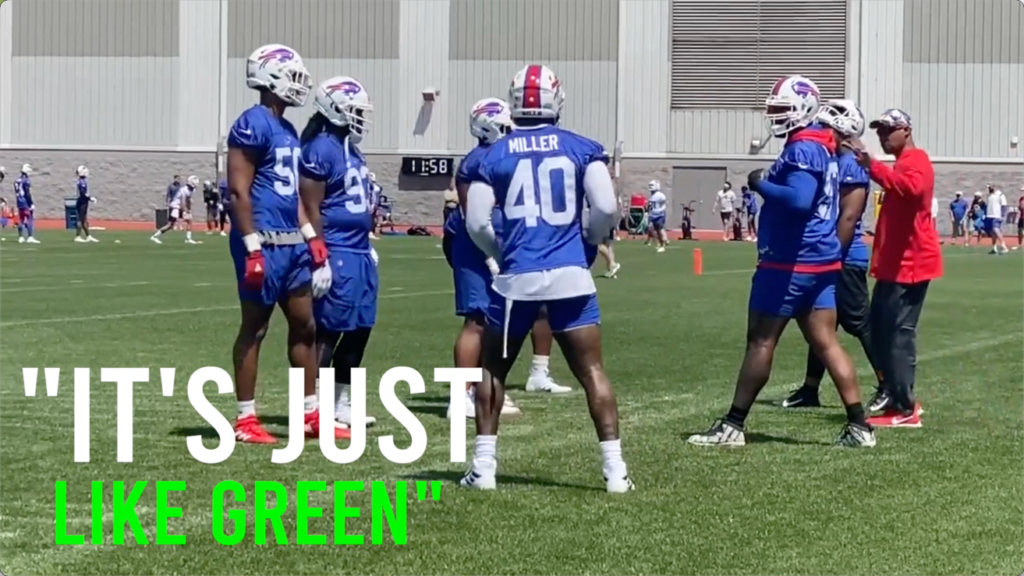 So when the defense calls “Green” in a play or when “Mug, Spider, Blue” is called, it’s a situation where the Bills are 100% expecting a pass. So the three rushers in this walkthrough (Miller, Oliver, and missing DE) can pin their ears back and rush. 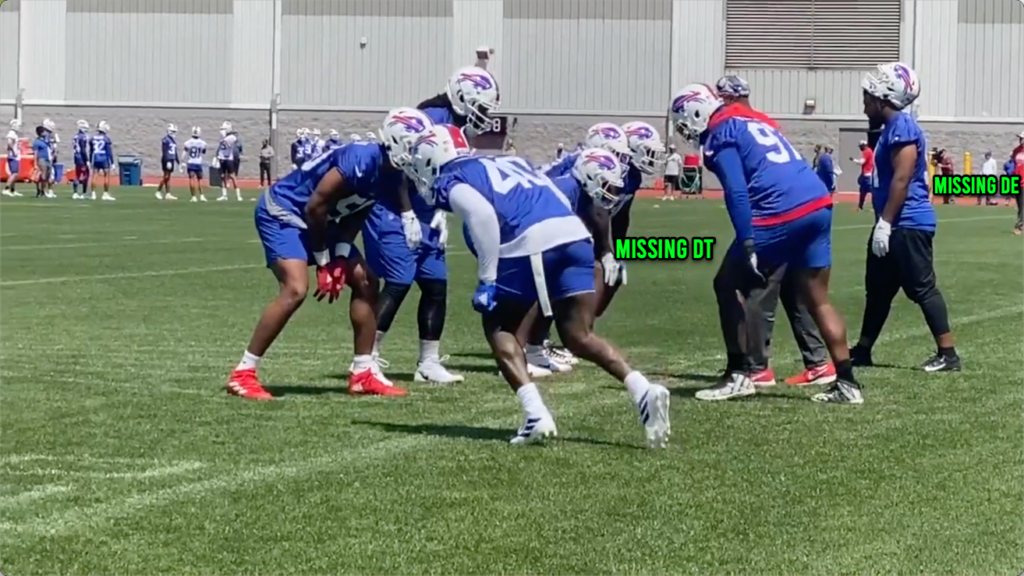 Everyone who drops into coverage doesn’t have to worry about their run fits because they are expecting pass, which is why they are dropping eight into coverage.

Finally, we can hear an important coaching point when assistant defensive line coach Marcus West confirms with Coach Frazier that Oliver is supposed to “Point,” rather than rushing into the A-gap. Oliver apparently told a teammate that he was an A-gap rusher when that is actually incorrect. So Coach West confirms with Frazier and then gets into this teaching moment. 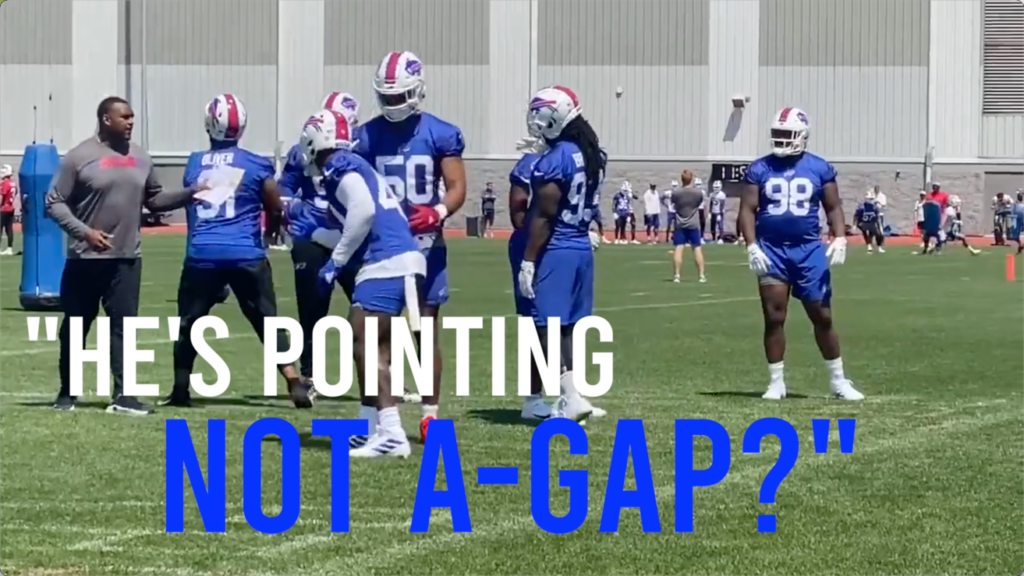 But first of all, “pointing” is when the defensive lineman is slanting and playing down the centerline of the linemen, he isn’t rushing into a gap. On this particular call, they want Oliver to “point” and play through the center. This is an important coaching point because when Addison acted as if he is going to “point” against the Chiefs he got the center and guards attention, and it opened up the rush lane for Oliver. 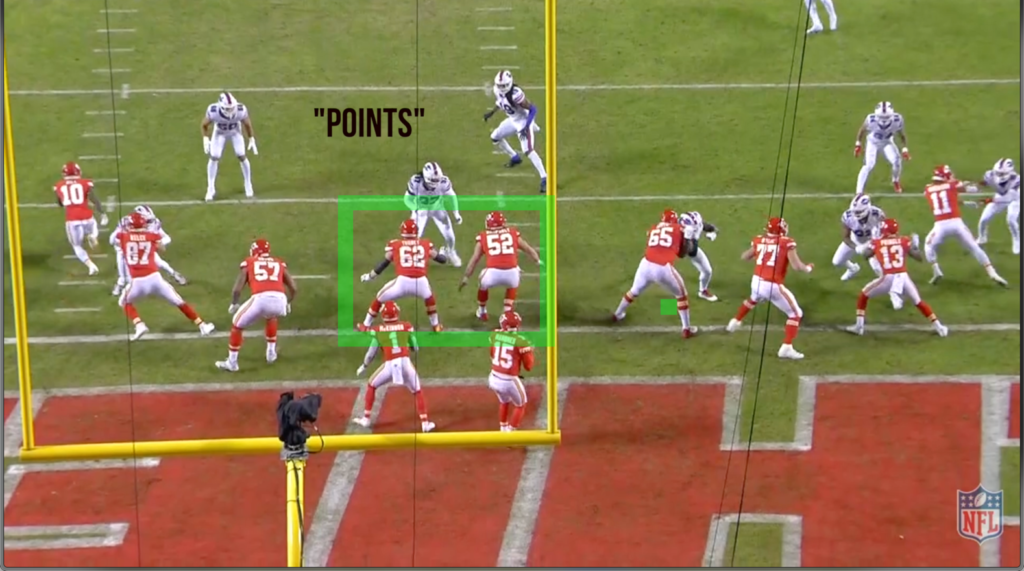 If Oliver plays into the center by “pointing,” he could draw the attention of not just the center but the guards as well. 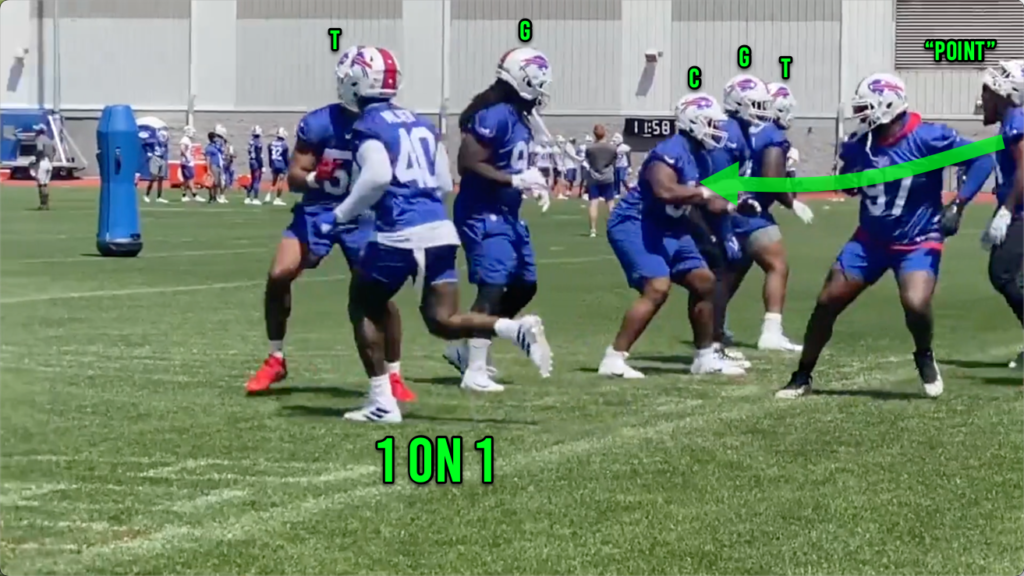 They will be forced to think on their toes and communicate as Oliver slants inside and the two Mugged linebackers drop out into coverage. So the Bills will show six possible rushers prior to the snap, but then only rush three. But hope to gain an advantage for Miller by getting him one-on-one with the tackle.

So this segment appeared to be Miller dishing out some wisdom to Rousseau, which indeed happened. But we can also see that the entire play call and communication going prior to the snap was to get Miller acclimated to the verbiage of Frazier’s scheme. But also to put him and the defense in a position to succeed sometime during the 2022 season.