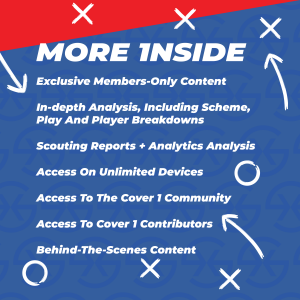 I usually use my space here to bring you some interesting stats to discuss the state of the Bills. But Sean McDermott’s leadership this season has been unquantifiable. In one year, the Bills had a home game relocated, had injuries to contributors in just about every single position room, and watched one of the members of their team receive CPR in the middle of a game. Despite all this, McDermott led the team to wins in their last seven games. I don’t have the ability to wax poetic about the culture Sean McDermott has built and the job he has had this season, so let me leave by saying this is his most impressive coaching job to date.

The Bills’ run game has always been strong, but mainly off the back of Josh Allen. In 2021 and the first half of 2022, the Bills lacked a running game that wasn’t Josh Allen. Through the first eight weeks, the Bills ranked 27th in EPA per running back attempt. From Week 9 on, the Bills ranked 12th in the same category. Rookie James Cook (who I previously wrote about here) was impressive, averaging 5.7 yards per carry on 89 carries. Both Devin Singletary and James Cook finished with over 500 yards. The run game has been instrumental in keeping Buffalo’s offense on schedule, while ranking as the fourth-best offense by DVOA over the second half of the season.

Now, I am not going to sit here and say wins are remotely a safety stat. But it would be unfair to sum up the 2022 Bills as they enter the playoffs without talking about Jordan Poyer and not mention that the Bills were undefeated when he played. The veteran safety played the year without his longtime partner Micah Hyde and with a rotating cast of young cornerbacks. And that is all before mentioning the bevy of injuries he faced himself and is reportedly still playing through. Quarterbacks had a passer rating of 89 when targeting Poyer and racked up another four interceptions. The veteran was invaluable in such a volatile year. Whether in Buffalo or elsewhere, Jordan Poyer earned his payday this offseason.

Assessing Gabe Davis’s 2022 has been a whirlwind endeavor. I want to open by saying that Davis has been largely fine. 863 yards and seven touchdowns are hardly statistics to sneeze at. The former fourth-round draft pick is a productive NFL receiving threat. But he posted his lowest catch rate of his career at 51%. The third-year receiver had had some memorable drops, as well, with the most prominent coming in the final seconds of a loss to the New York Jets in Week 9. Instead of putting Buffalo in a position to send the game to overtime, the ball fell through his hands, and the Bills lost. Davis also dropped a touchdown that hit his hands in the regular season finale. Luckily for Gabe Davis, we are entering the postseason, where Davis put up 242 yards and 5 touchdowns in two games last season.

What makes this team potentially different than past playoff failures in the Sean McDermott era? The numbers are not that far off from what they have been since Josh Allen ascended to one of the NFL’s best quarterbacks. So, like we talked about Sean McDermott in the open, this team has something unquantifiable. They have put together four fourth quarter game winning drives. They have pulled themselves out of pregame ruts, adjusted, and made timely plays. Time will tell if they keep making timely plays, but this may be the most battle tested Bills team to date.