Every NFL fan is eagerly awaiting the start of the 2022 season, and many are trying to figure out how to spend their offseason. With most of the big moves for this year already behind us, one productive way to use this time is to begin thinking about next offseason.

NFL fans at any level above casual know the salary cap significantly impacts the ability of a team to build its roster. The strictures of the cap reward prudent, value-driven, long-term planning, but team-building often requires rewarding successful players and aggressively acquiring crucial pieces. How do Brandon Beane and the Buffalo Bills’ front office balance these considerations in roster building? This article won’t pretend to deal with advanced cap calculus, but it will examine how the Bills have stacked contracts by position and what we can expect for future moves.

First, we need to know how the salary cap limit is defined. The cap is part of the collective bargaining agreement (CBA) and its negotiated limit on profit sharing between the owners and players, which is how the cap is figured. Andrew Brandt, a former Packers executive and one of the best sports business resources, described how the cap is determined in a brief article introducing some salary cap fundamentals:

The CBA sets the percentages for sharing of NFL revenue, dividing it between the owners and the players according to what has been negotiated… [O]wners [are] getting 53% and the players receiving 47%…Thus, to calculate the cap in simplest terms: 47% of NFL revenues is divided by 32—the number of NFL teams—to set the team cap number for the year.

Contract stacking is simply a term to describe how teams construct contracts and how those contracts overlap across years to facilitate long-term cap health within the confinement of the cap. It’s like Tetris: the $39M Allen block is coming down in 2023, and Beane had to plan to make room for the Edmunds, Oliver, and Knox blocks. 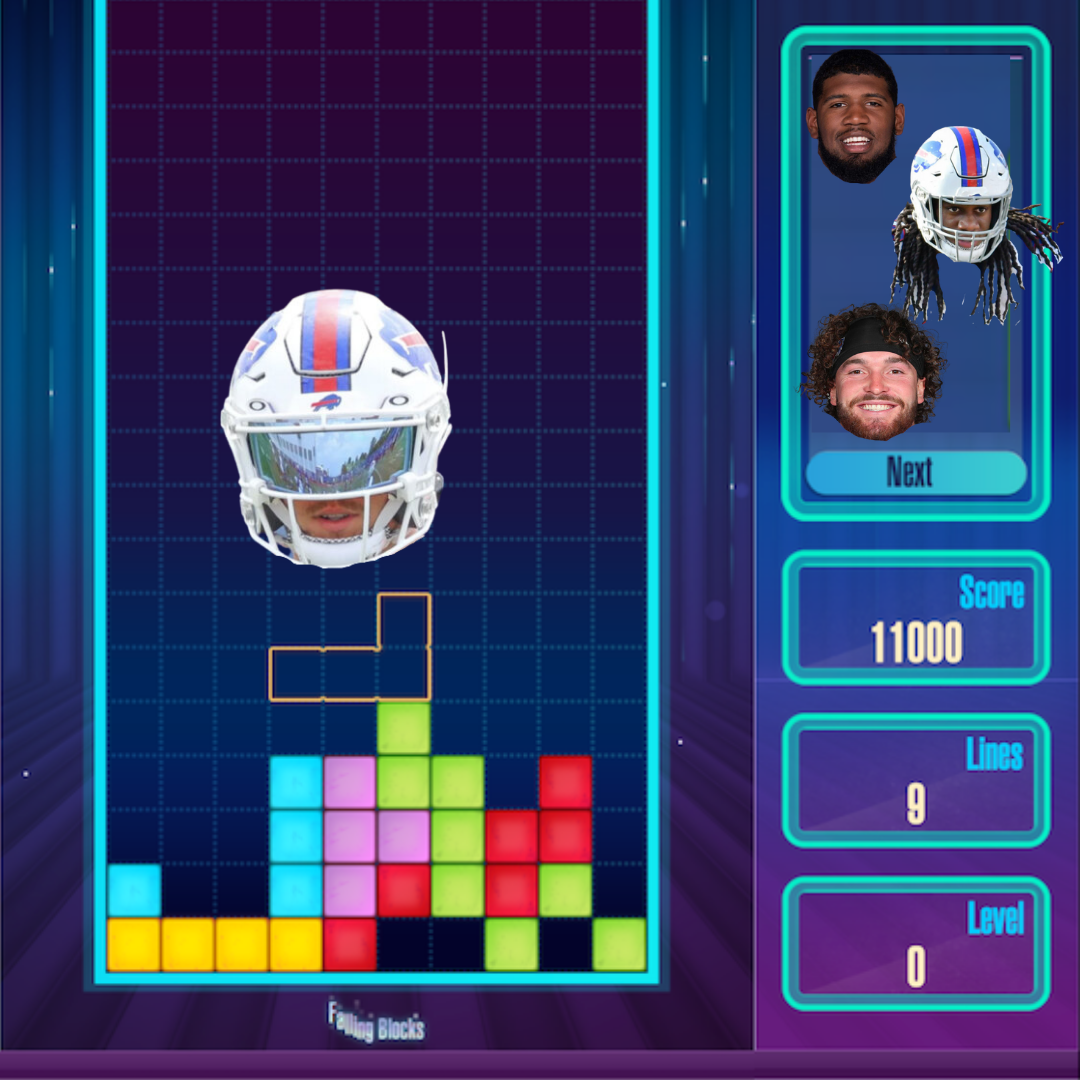 Beane and the front office have been planning ahead for multiple years, evaluating players for extension, estimating the cap for future years, and negotiating with players with existing contracts to create more space. This is why the cap going down from $198.2M in 2020 to $182.5M in 2021 created such a pinch for so many teams. NFL clubs had been planning on the annual increase of $10-$13M per year that had been the case since 2013, and they got a ~$16M decrease. Thankfully, global pandemics don’t happen every year, and NFL GMs should be able to anticipate significant growth in the cap for the foreseeable future.

Examining how Buffalo stacked its contracts by position gives an indication of how it might approach the draft and free agency in future years. For an in-depth breakdown of each contract for the 2022 Bills, check out the Cover 1 Salary Cap Spectacular podcast episode. This week, let’s look at the offense, and the defense and special teams will come next week.

Injuries will happen, relationships will deteriorate, and the unexpected will rear its head, but we can get a sense of future roster-building targets. All of the following charts come from Spotrac’s Multi-Year Summary tool.

Josh Allen will remain King in the North for a long time, but get accustomed to a revolving door of reliable, low to moderately priced backup QBs. The main point is the obvious one: the Bills have a franchise QB to build the team around, and in the NFL that is worth any cost.

The Bills have utilized a mix of rookie contracts and low-cost FA RBs. This is difficult news for Singletary fans, but expect that trend to continue, likely meaning Motor will sign for a better deal elsewhere after 2022. In terms of percentage of the cap, the only positional group the Bills spend less on is Special Teams (3.79% to 2.02%)

Stefon Diggs’ extension ensures Allen will have his best weapon, but there is not a significant financial commitment on this list beyond him. Most of Bills Mafia and the fantasy football community are drooling over Gabriel Davis’ future, but if it turns out his ceiling is merely a good WR3, the Bills will need someone else to break out. That, or, in the mold of John Brown, Cole Beasley, and Emmanuel Sanders, Beane will need to find another affordable vet for WR2. Also, watch for mid-to-late round WRs to keep getting drafted by the Bills. 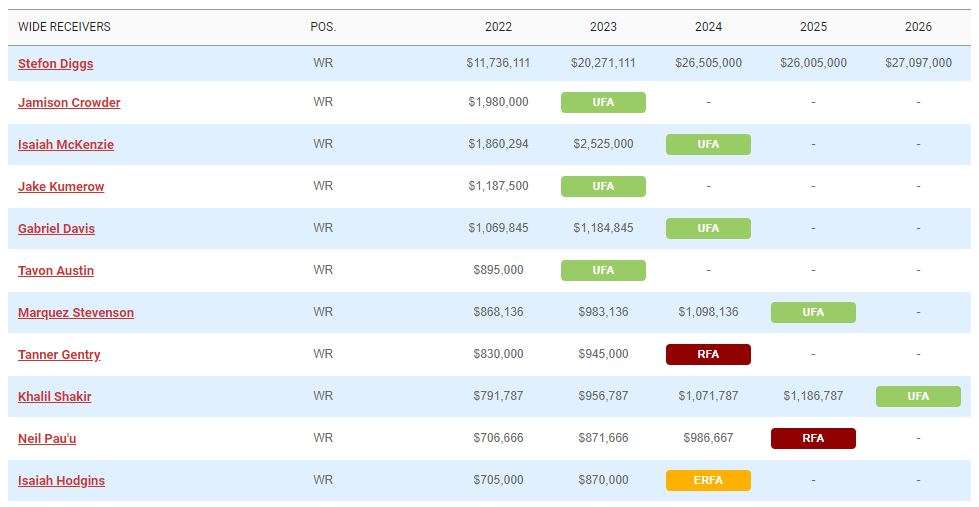 That UFA button next to Knox stands out like a flashing light. The orange text for Howard in 2023 means that is a signing bonus commitment to him in a void year of his contract, meaning the top three TEs here are free agents after this season. Knox is a strong candidate to get an extension as long as the TE market hasn’t gone completely off the rails (Thanks Browns and Panthers). If any other than Knox show out, they could get re-signed as well, but there is little reason to believe the TE room will look the same in 2023.

The offensive line is the clearest example of potential turnover at the bottom half of the roster and how Beane stabilizes with free agents. The starting five OL are set for 2022, and four are signed through 2024. It would not be surprising to see Saffold sign another one-year deal if 2022 goes well, but with the way Beane has rotated through veteran guards, we shouldn’t get attached. That streak of green in the 2023 column indicates the Bills have little commitment to their backup OL. Beane’s established pattern of filling in behind the starters with veteran depth and then drafting raw but athletically gifted rookies for upside shows no sign of slowing. 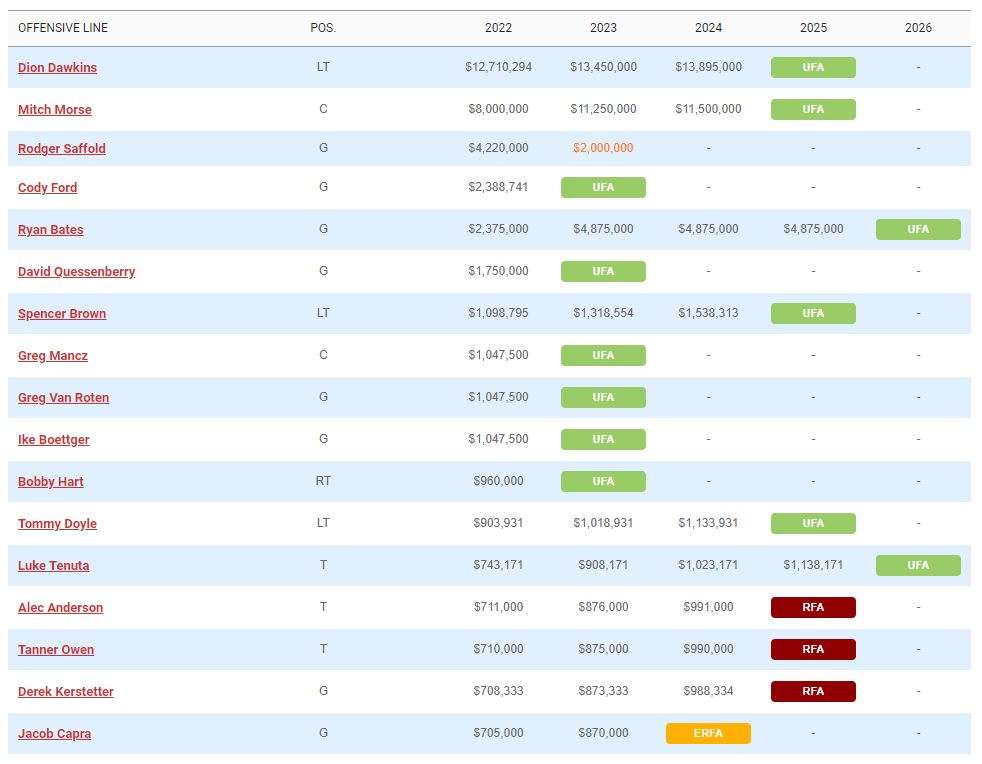 The impending jump in the cap associated with new television and streaming deals is critically important to the Bills’ roster-building plans. If the cap doesn’t increase as hoped, Allen’s contract will make filling out the rest of the roster a tight-wire act over the Falls. But considering it took COVID-19 to slow the league down, it’s a good bet the cap will grow. For the Bills’ long-term offensive roster, the way the front office has stacked the contracts tells us that, unless the starters are extended, RB and TE will look significantly different starting in 2023, and the backups will continue to churn while Beane searches out draft day steals. Fans who were paying attention knew that WR was a sneaky need this offseason, and it might continue to be so if Gabe Davis falls short of his lofty expectations.

That’s the long-term. For the immediate future, our Buffalo Bills have one of the best rosters in the NFL, and it was their planning that started five years ago that got them here. Check back next week as we go through the same exercise for defense and special teams.