There are only two weeks left in the 2022 NFL regular season, and Week 17 confronts the Buffalo Bills with the second most difficult must-win matchup they have encountered this year in the Cincinnati Bengals. The Bengals have a dynamic offense led by Joe Burrow and powered by Jamarr Chase, Tee Higgins, and Joe Mixon, and their defense is no joke either. The Bills will face a real test on their quest to claim the #1 seed in the AFC.

Our quest for free money has had smooth waters over the last few weeks. There was no article last week with the holidays, but we did get our props in, with another 2-1 showing:

🎄🚨Three Props🚨🎄
No article this wk – just home from a Caribbean cruise (🥶🥶🥶 welcome back) & our internet is out – but here’s your @BetUS_Official 3 props for this wk!

The calls on Devin Singletary and Josh Allen came through, while Taron Johnson fell a little short with 3 tackles. A good week overall. My job on this journey is to keep pointing us toward the bags of gold. Let’s get that analysis money.

The Bills and Bengals are two of the NFL’s hottest teams. Cincinnati has won their last seven games, and the Bills their last six. There are fantasy stars all over these offenses, and the Buffalo weather should be nice enough for a track meet. Since Week 9, the Bengals and Bills are 4th and 9th respectively in Total Passing EPA. The teams are close to flipped in terms of Total EPA Rushing over that time frame with Cincy’s rushing attack at 11th and the Bills at No. 3. You already know the names, and both of these teams can score on any play.

For all of the offensive firepower in this game, be prepared for Q3 to grind down. Bengals’ DC Lou Anarumo has put himself into head coach conversations with his schematic changes in second halves. Anarumo got national attention for those adjustments during Cincinnati’s playoff run last year – particularly slowing down Patrick Mahomes and the Chiefs in AFC Championship Game – and his success in manipulating his plan within the game has continued into 2022. Cincinnati’s defense is ranked 8th in second-half DVOA at -8.7%, but they are even better than that in Q3 alone: their Q3 DVOA ranks second at -18.4% (Football Outsiders). They showed rare sloppiness in Week 16, where the Patriots almost erased a 22-point deficit, but that’s the exception that proves the rule. The Bengals and Anarumo are even better if the game is late and close (H2 or OT and within 8 points), where they rank 4th in defensive DVOA at -21.2%.

Adding to that slowdown, the Bills are no slouch in the second half. Where CIN was 8th in H2 D DVOA, the Bills are 6th with -15.1%. And late and close, where the Bengals were 4th? Your Fighting Fraziers are 2nd at -24.7%. Also, it is way beyond time that Leslie Frazier gets more head coaching buzz.

It was tempting to include the H2 under as a prop here – it’s currently at 24.5 – but the concern is how good each QB is in late-game situations. The under could be hitting for 28 minutes of the second half and then get blown out of the water as Burrow and Allen go mano y mano, but it wouldn’t be a surprise if the respective defenses took over the second half. For live bettors, if the game has had fireworks in the first half and the second half total is driven up over 28.5 or higher, that’s probably a good number to get the under, but caveat emptor.

Watch for a close game with some explosive plays, especially in the first half, that turns into a close back-and-forth game with great defensive plays, electrifying offense, and a last-possession playoff atmosphere. My heart rate is already amped.

CIN is really good at containing WR1s, RBs, and TEs, but it comes at the expense of WR2s and other WRs.

Some are expecting a big Stefon Diggs game, and that is always possible, but Cincinnati has chosen to limit opponents’ best receiving weapons, and Allen has distributed the targets around more in the last few weeks. Diggs having monster production in a prime-time game with serious playoff ramifications would not shock anybody, but Cincy might be heavily invested in slowing Diggs down, encouraging Allen to look elsewhere.

In the second half of one-score games, Davis is second on the Bills with 23 targets and 13 receptions, averaging 16.1 yds/rec. The game script calls for a tight back-and-forth game, and the Bengals’ weakness is their secondary against WR2+. Add to this that Cincy’s current CB duo each rank in the bottom 25 for passer rating against (min 300 coverage snaps, PFF), and Gabriel Davis should be able to produce.

Higgins has gone over this line in 5 of his last 8 games, and when the Bengals are in one-score games, Higgins leads the team in targets, catches, yards, air yards, and TDs. Now, a lot of those counting stats might belong to Ja’marr Chase if he had not missed around 4 gms, but Higgins also leads the Bengals in EPA/Tgt in one-score games, and it’s not really close. Higgins’ EPA/Tgt is 0.50 in those situations, while the next closest Bengal is Samaje Perine at 0.27. Higgins’ 0.50 EPA/Tgt is 10th overall just ahead of Justin Jefferson. And according to Next Gen Stats, Deep Passing is one of the areas that most favors the Bengals. 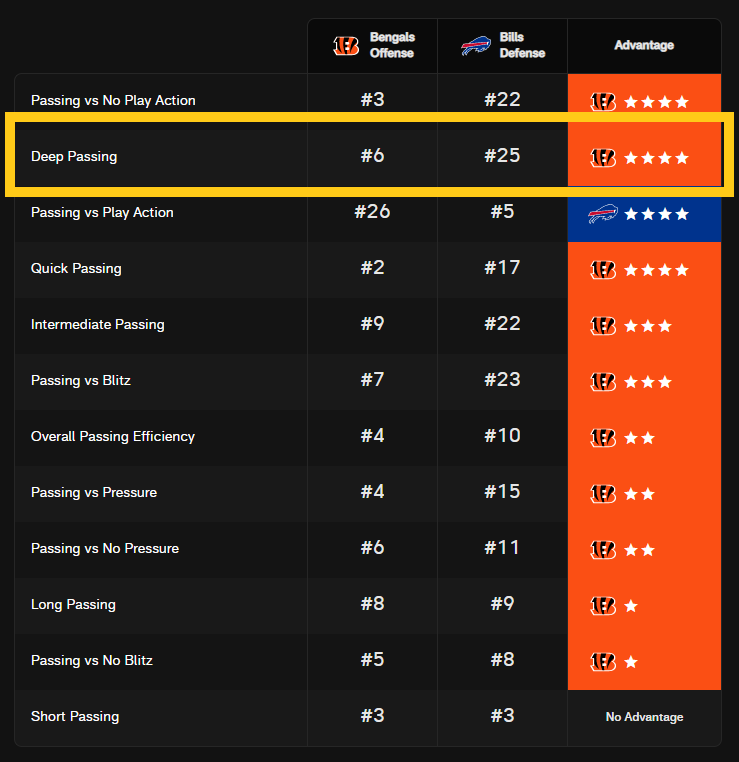 Bills vs. Bengals: 5 keys to victory in NFL Week 17

Bills vs Bengals should be a hell of a lot of fun. Two high-flying teams playing some of their best football heading into an important prime-time game, and one of those teams is your Buffalo Bills. If you can’t enjoy this, there isn’t much to tell you. This game has a chance to punch us all in the face with a fistful of awesome. The Bills get an early lead, Chase makes a series of huge plays to bring Cincy back, the third quarter grinds to dust. and each QB looks to take over the fourth, but there’s only one King of the Fourth, and his name is Josh Allen: CIN 31 – BUF 35.

Tail ’em or fade ’em, let me see those winnings: @LowBuffa on Twitter.