There are many ways Brandon Beane and the Buffalo Bills’ front office maneuver through the confines of the NFL salary cap. One key tool in the fight to build the best roster in the league is contract stacking.

Contract stacking refers to how Beane and the Bills have allocated the cap across multiple years when they have negotiated and finalized individual contract offers. The factors involved include how the Bills assess positional value relative to the NFL, how important they consider each position to the team itself, and their evaluations of the players themselves.

Now, very few Buffalo fans will complain about paying Josh Allen, but it’s not complaining to realistically admit that Allen’s $258M has a seismic effect on the Bills’ salary cap. How One Bills Drive strategizes around that contract impacts every other positional group on the team and makes their long-range planning even more crucial. Examining what we can from how the Bills have stacked contracts lets us see part of their vision and future needs.

Last week, we took a look at the offense.

This week, we’ll examine the defense, starting with defensive tackle. All charts and salary numbers are from Spotrac.

When the Bills exercised Ed Oliver’s fifth-year option, it locked up the three DTs who should get the most snaps at the position over the next two years – Oliver, DaQuan Jones, and Tim Settle. Oliver will remain the key DT and should get a significant extension next offseason keeping him through 2027 or longer. Jones’ salary more than doubles in 2023 to $8.5M, but his dead cap hit (the cost Buffalo would still incur if it cut Jones) would be $7M, freeing up limited cap space. Expect Jones to be with the Bills through 2023 unless his performance wholly deteriorates or he is a poor culture fit, both of which seem unlikely at this point.

Settle has shown flashes of promise when buried in a deep Washington DL, but he will need to demonstrate consistency across increased snaps in 2022 to justify the big raise potentially heading his way in 2023. Eli Ankou capably filled his rotational role in 2021 and should expect a promotion in snaps depending on the Bills’ use of Jordan Phillips and Boogie Basham. Ankou could continue to sign one-year deals if he maintains. The other names on this list were undrafted rookie free agents.

Spotrac and the NFL will tell you Von Miller is a linebacker. There are technical reasons for that designation, but on the field, Miller is a defensive end. His contract should be added to this group. Miller is a long-term lock whom the Bills clearly believe will age well, otherwise this contract becomes a millstone even if the cap skyrockets.

Beane, Sean McDermott, and Leslie Frazier have each spoken about how the group of young DEs needs to step up. This is true, especially for Epenesa. It’s fun to have Phillips and Lawson back and the energy they bring, but they will need to outshine their contracts to earn anything more than one-year deals at this point in their careers.

Miller was discussed above. Milano is nailed down. Third-round rookie Terrell Bernard should carve out at least an LB3 role.

The main question here is Tremaine Edmunds. The way Bills Mafia is polarized around Edmunds is not a factor for Buffalo’s front office. Be ready for half of the fanbase to angrily explode when Beane signs Edmunds to a four-year extension in the neighborhood of $14-$16 million average annual value.

The rest of the pieces here have some impact on special teams but little on defense, barring injury. 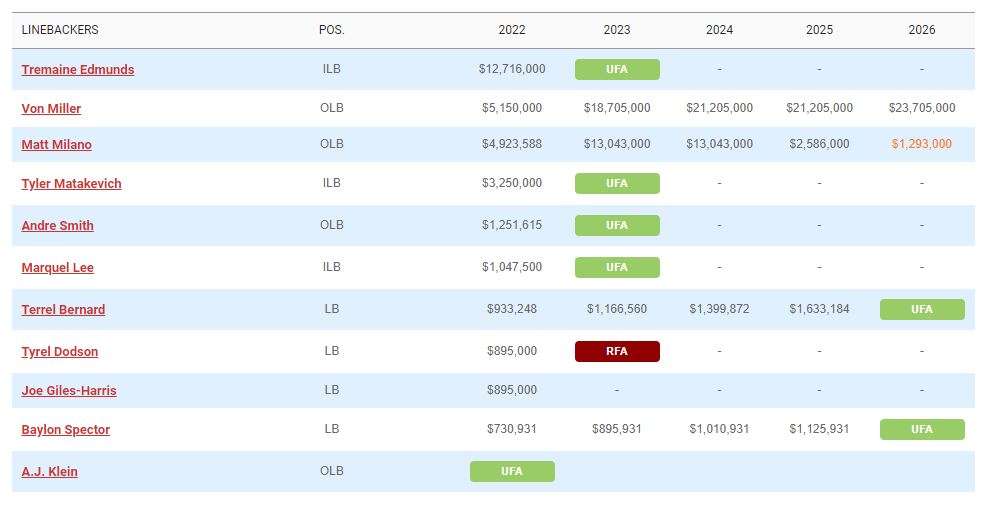 The likely top-three cornerbacks have contracts through 2024. There is hope invested in Dane Jackson based on some of his play last year, but he is still limited athletically, which admittedly has not stopped the Bills before. But Kaiir Elam should be the Bills’ CB2 next to Tre White for several years at least. Cam Lewis is a probable backup. The rest of this roster group will continue to fill up practice squad slots and churn over from year to year. 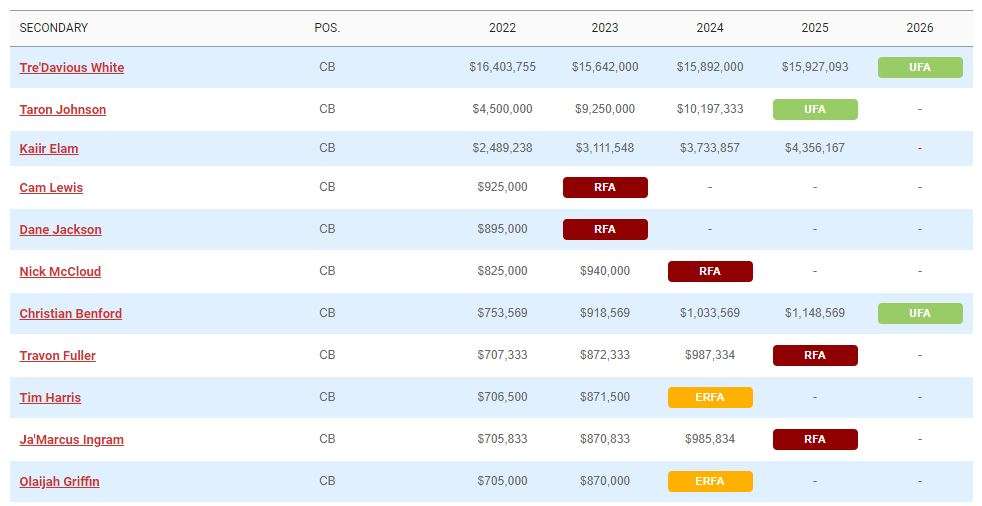 Given how crucial safety play has been to the Bills’ defense under McDermott and Frazier and the long-term contract status of the dynamic duo playing there, this is the position with the most urgent need.

Micah Hyde will turn 32 this season, and Jordan Poyer turned 31 right before the 2022 draft. Neither is tied to the Bills beyond 2023. Poyer has made his desire for a contract extension known, and while the Bills have good reason to extend his deal, nothing is forever. The Bills need to address safety for 2023 and beyond because the other players on this chart have not demonstrated they can live up to the level of play Hyde and Poyer have established. Ideally, Hyde and Poyer will maintain their exceptional play for two-to-three more years while the Bills work in and train up some yet-to-be-acquired young safeties. Of all the defensive position groups, this is the one to watch.

Drafting Matt Araiza indicates the end of Matt Haack’s time as the Bills’ punter. Araiza will have to prove he can be more consistent with hang time and display that he can hold for Tyler Bass, but there is no reason to believe Haack will be part of the 2022 roster. Once that move is finalized and if Araiza shows he is worth even half the hype, the Bills’ specialty players should be the same for a long, long time.

Long before the Allen contract grows significantly in 2023 (moving from $16.3M to $39.7M), Beane and the Bills’ front office began planning for how to build out the roster around a contract that size because they believed Allen had the potential to eventually demand it.

Beginning next offseason, when they move from 14th in QB spending to fifth (depending on the contracts Lamar Jackson and Kyler Murray receive), Buffalo will have to maneuver around a single contract that takes up about 18% of the cap (currently estimated at $218M). Examining positional contract stacking reveals how the Bills will approach those machinations, and how they think about positional value leaguewide and in-house, while also offering a sneak peek into future plans for extensions, free agency, and the draft.  The effort to maintain roster health and flexibility with a contract commitment of that magnitude will be a new task for Beane and company. That’s ok. They’ve planned for it for years.