Early in the second quarter of their second preseason game, the Buffalo Bills had a third-and-four from the Denver Broncos’ 11-yard-line. The Denver defense appears confused in several places on the play but generates enough of a pass rush that hurries Case Keenum before he can see a walk-in TD, but he still manages to find Crowder despite some poorly timed routes and sets up the eventual touchdown.

The OL in front of Keenum was: 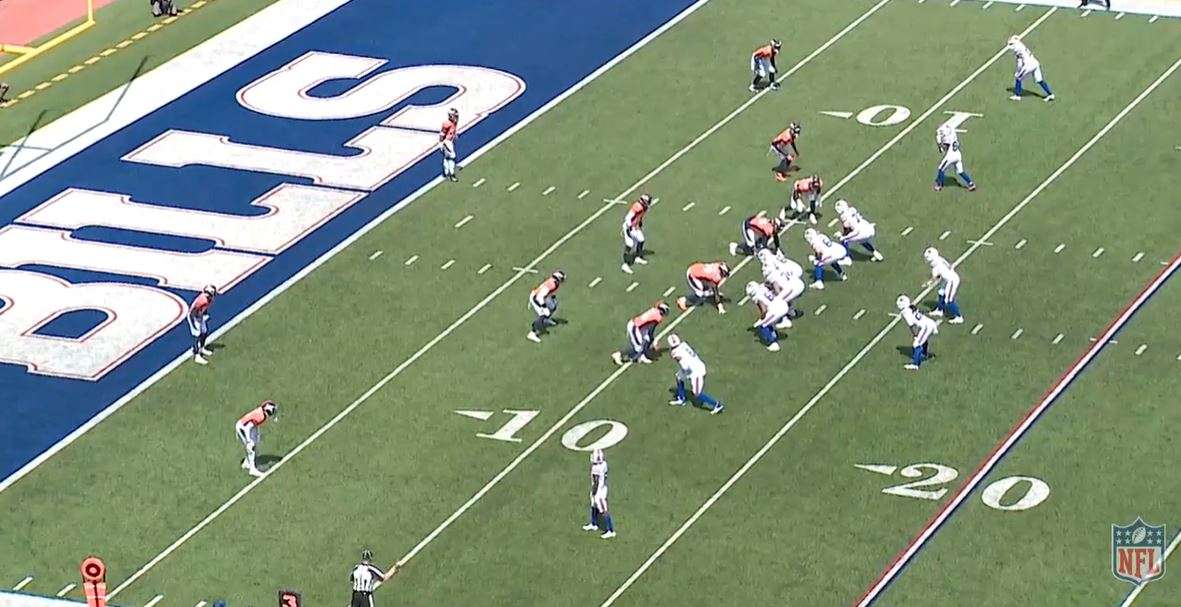 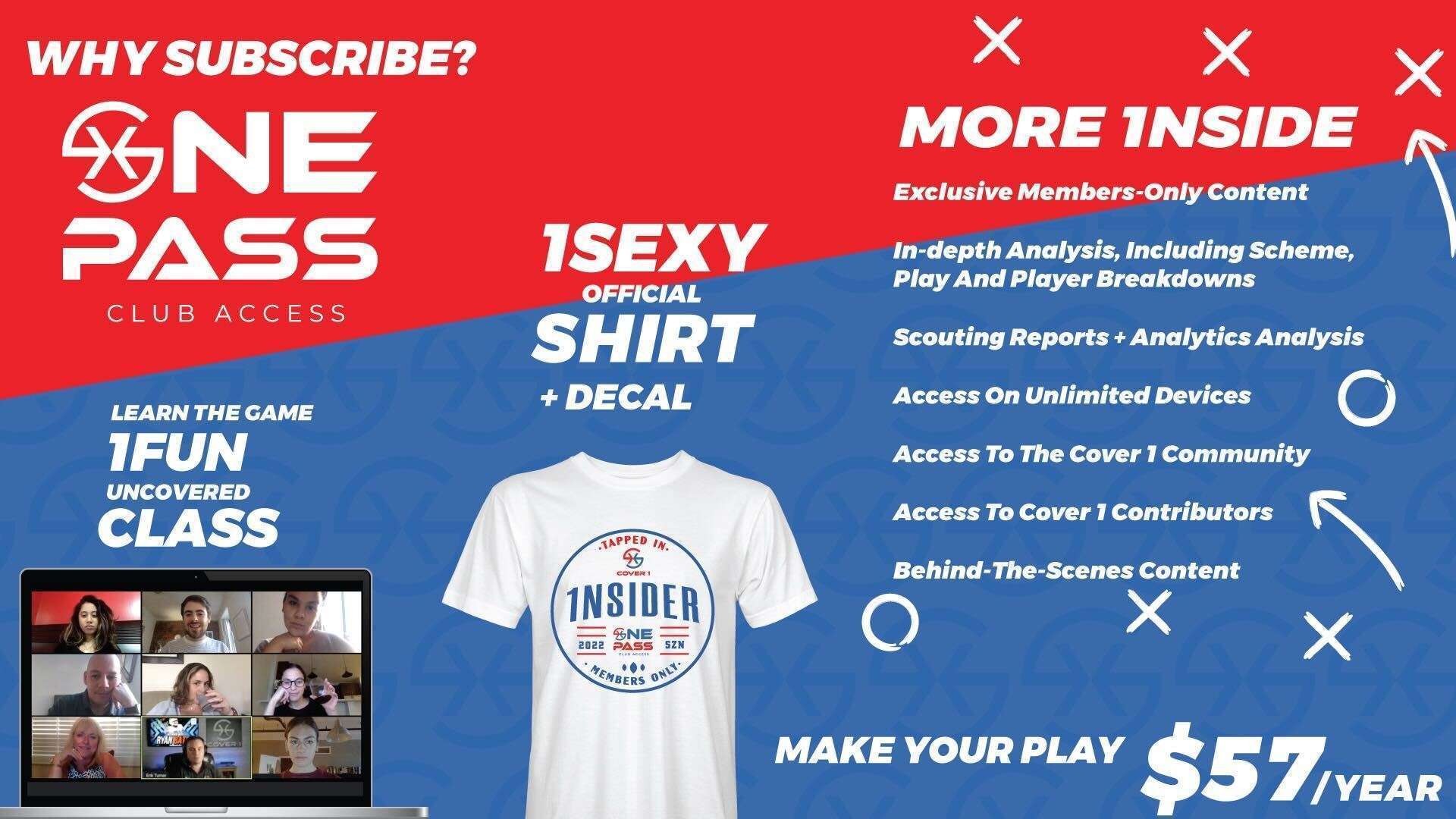 The Bills are in 11 personnel (1 RB, 1 TE, 3 WR) with James Cook at RB and OJ Howard detached from the line at TE. All five skill positions run a route. 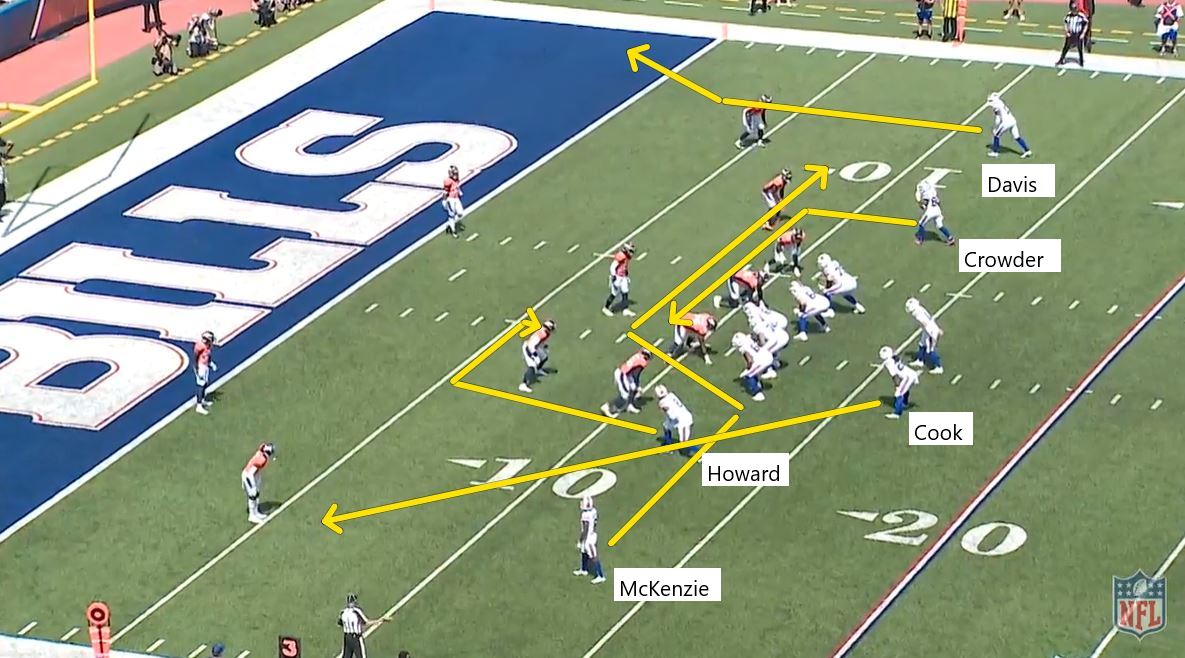 The Broncos are in nickel with four linemen, two linebackers, and five DBs. Strnad and Singleton are the LBs, and Ojemudia, Bassey, and Mathis are in at CB. McKenzie turns upfield too early and could have been called for illegal motion, but the refs don’t throw the flag. 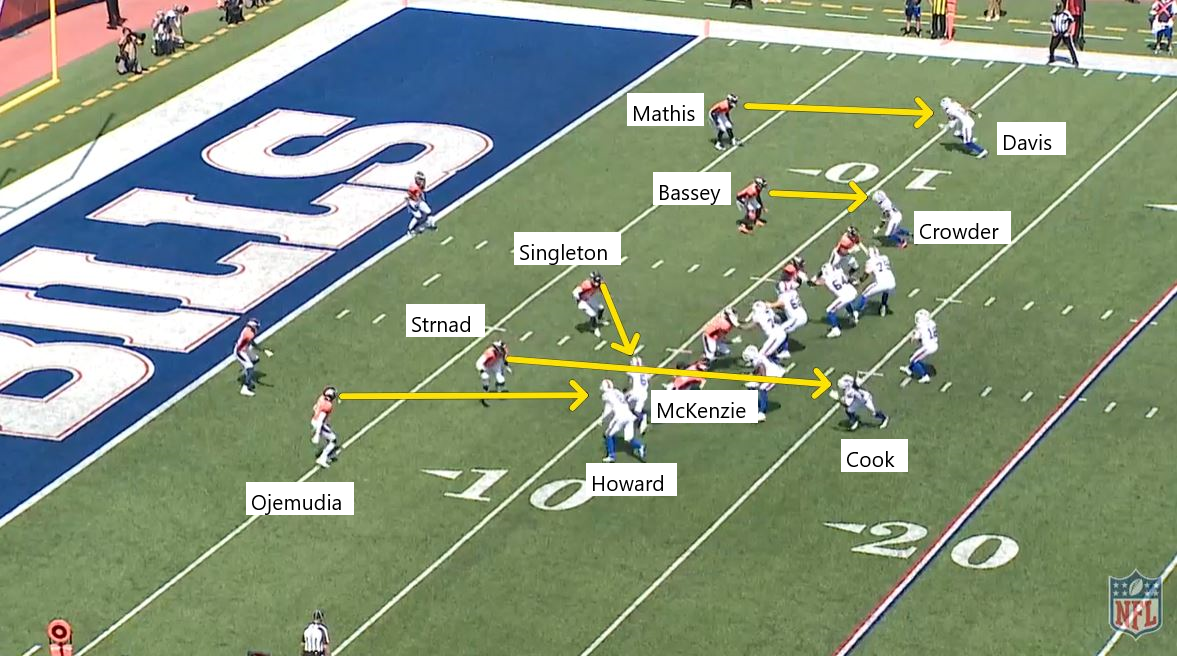 There is confusion for the Broncos right at the snap. CB Ojemudia first moves like he is planning to cover Cook but stops for a split second when he realizes SLB Strnad is taking RB out of the backfield. Ojemudia quickly busts in to try to pick up Howard. Strnad provides decent coverage on Cook, likely taking away Keenum’s first read. 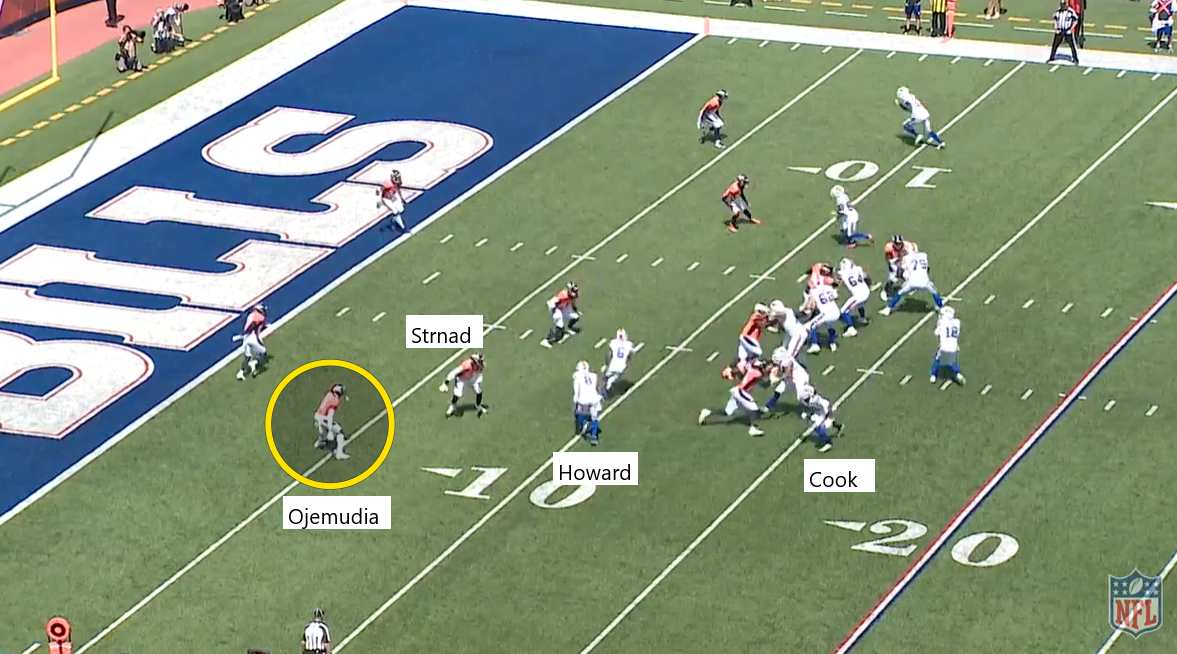 Denver’s bigger problems come in how they handle the mesh between McKenzie and Crowder and their communication. Broncos’ MLB Alex Singleton (49) initially picks up McKenzie crossing. 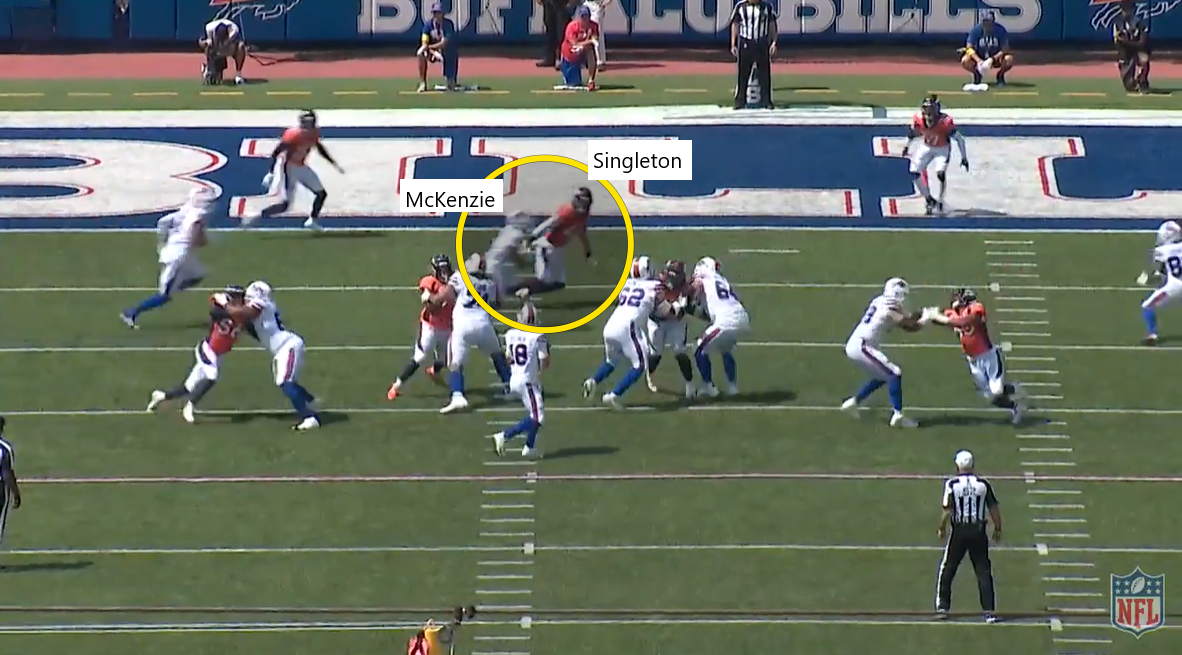 Singleton gets confused in his responsibilities when Crowder and McKenzie mesh. The Broncos try to run a banjo coverage but struggle in both communication and execution. Banjo coverage means a switch technique where two defenders change who they are responsible for to generate better leverage. A defense might use a banjo when an offense runs plays that include picks or rubs or just to navigate the traffic of the play better. Singleton hesitates though, tries to change direction to switch to Crowder crossing the other way. This leaves McKenzie wide open. Keenum appears to be eying Howard, but Crowder could be in his field of vision as well.  It’s possible Keenum was expecting Crowder to already have crossed past Howard, but Crowder had run the route almost delayed, with a drop step in his release and an extra step in his break to the left. Between McKenzie’s early start and the way Crowder runs his route, the timing of the mesh is off.

The Broncos’ DE has beat Hart with a bull rush. Time is ticking, and Keenum won’t have time to work all the way from left to right to find McKenzie. 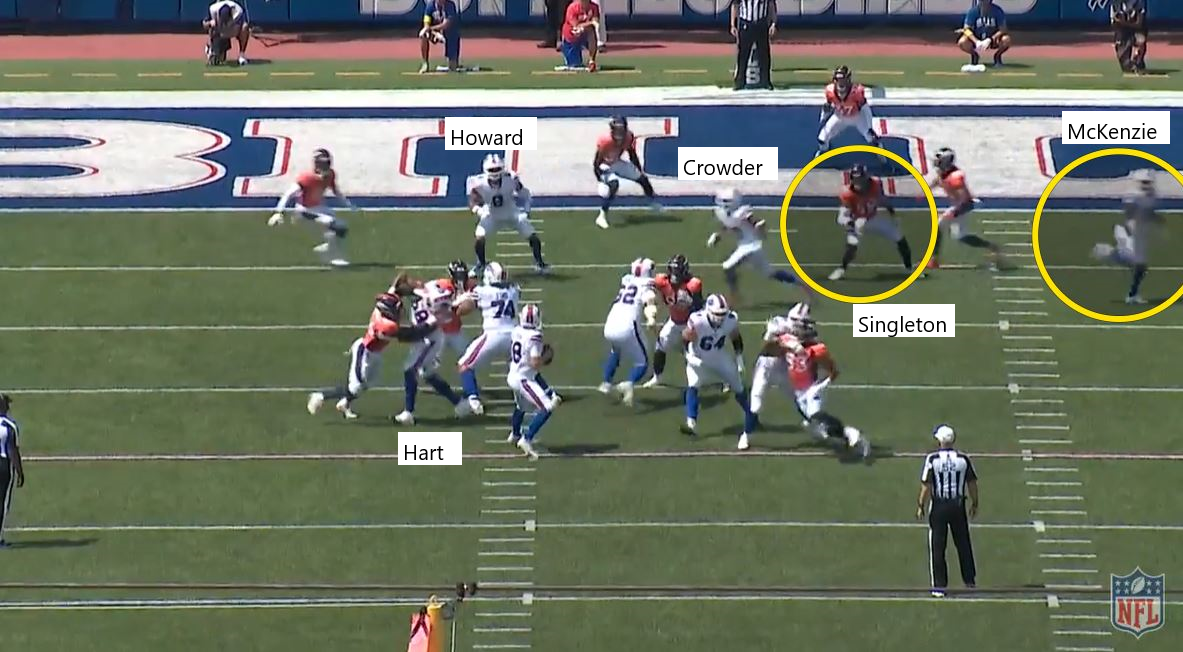 It looks like DEN CB Essang Bassey (34) tries to tell Singleton to follow Crowder – see him pointing in the image below – but it’s too late and Bassey tries to catch up to Crowder to cover. If Bassey and Singleton are going to execute a banjo, it needs to have been signaled significantly earlier, and Bassey needs to have pulled off to pick up McKenzie. The Broncos do not get the switch pulled off, and the mesh – even with the timing thrown off – has created a lot of separation for Crowder.

Denver’s communication issues may be the result of inexperience, lack of playing time together, or recognition too late into the down. 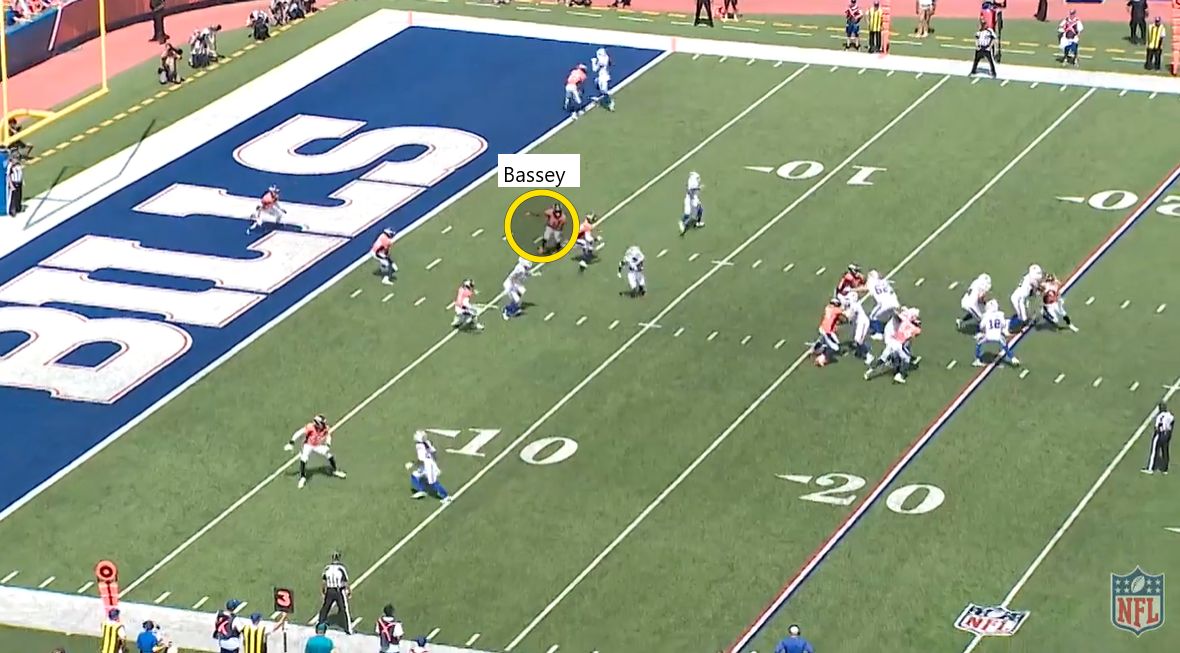 Keenum decides on Crowder. If the play design runs from left to right, then Crowder is Keenum’s second read with Howard, McKenzie, and Davis to follow. Keenum hangs in the pocket despite knowing he’s probably about to get crushed, and completes the pass. 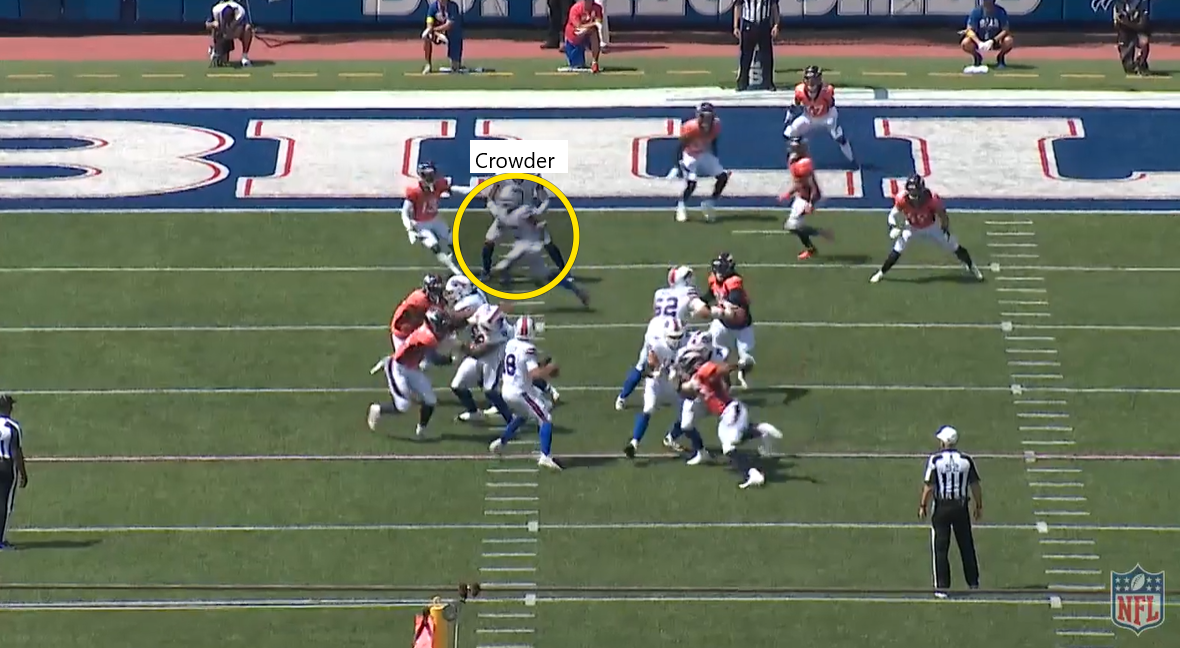 The only thing that stops Crowder from scoring is Strnad getting off of Cook and coming up to make the tackle, but Crowder had still earned the first-and-goal. 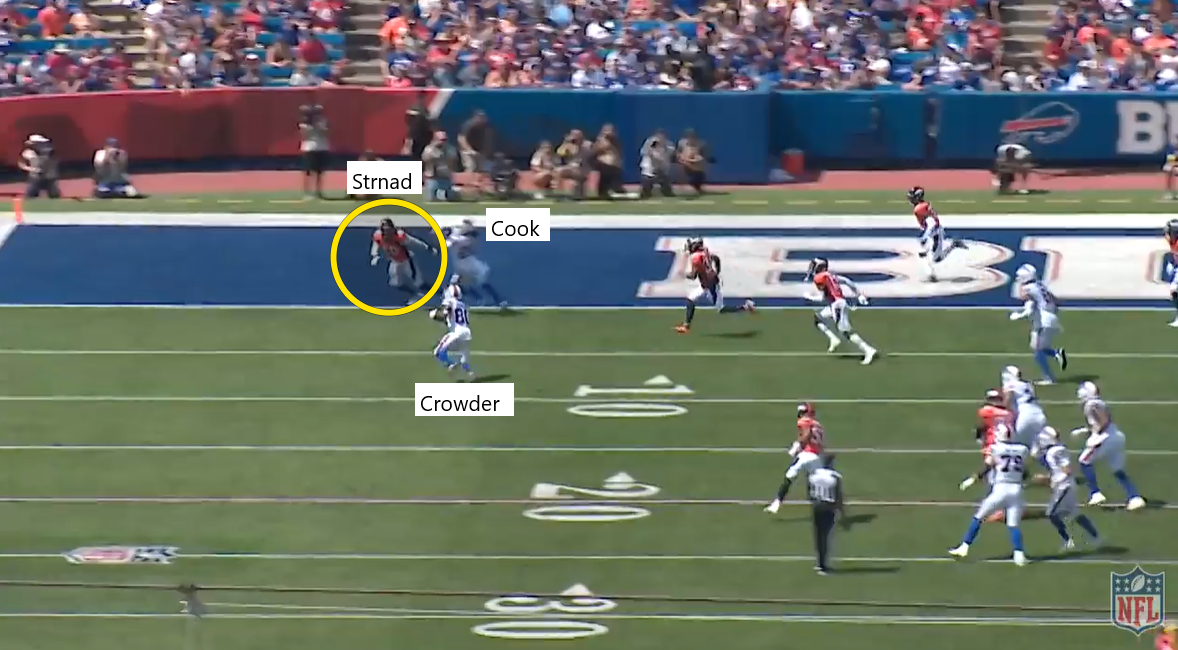 If you have compassion in your heart, feel some for Alex Singleton, who finished this play in a place no defender wants to visit – the Open Plains of Shame. 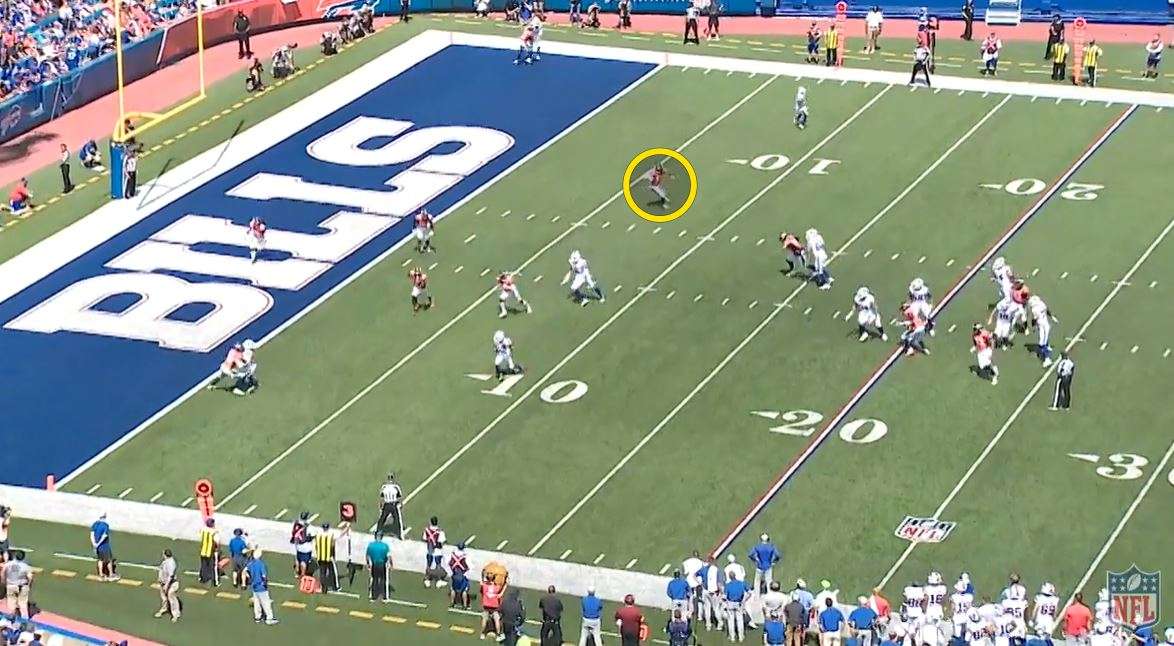 The Bills score on the next play with Zack Moss’ first of two TDs on the day, but it was a complex play design, the Broncos’ poor communication and execution, and Case Keenum’s vision and toughness that turned a unconverted third down and likely FG into a first-and-goal from the two-yard-line.