Week 14 of the NFL season brought the New York Jets to Orchard Park, and the Buffalo Bills came away with the victory in a game that started out ugly in the wintery, messy weather, but on the Bills’ last drive before the end of the first half, Dawson Knox broke the scoring drought with a 24-yard touchdown reception from Josh Allen.

Many folks expected a big season from Knox when he signed a contract extension this offseason, but have been disappointed with his 2022 performance to date. While his touchdowns are down, the rest of his counting stats are within 78% of last year’s pace. Considering the personal tragedy he and his family suffered right before the season began, and the fact that TDs are too volatile a metric for reasonably informed fans to expect to consistency year to year, Knox is on pace for another successful season as the Bills’ TE1.

Let’s dive deep into Knox’s third score on the 2022 campaign. 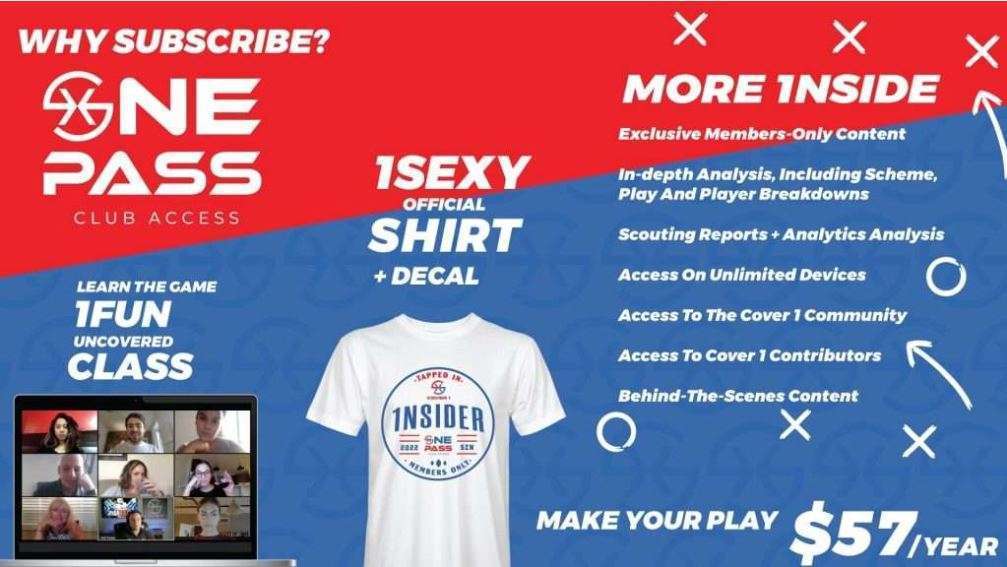 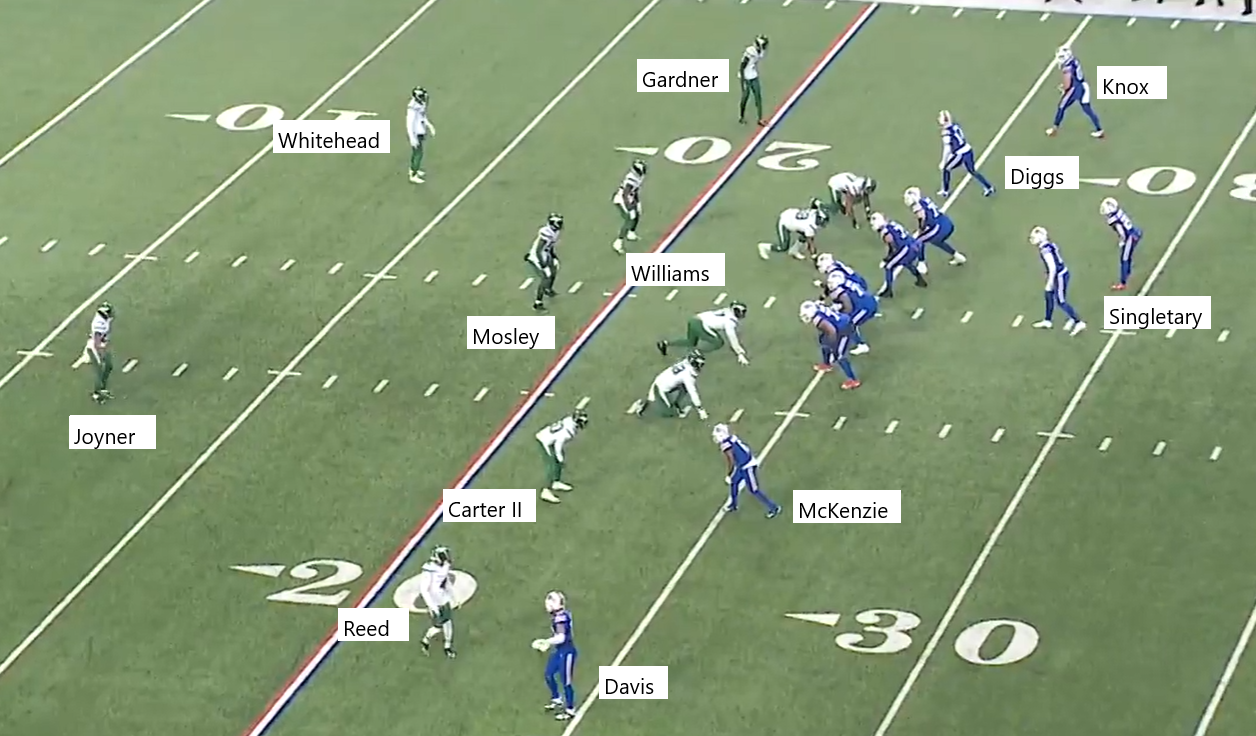 The Jets are matching with nickel with cornerbacks DJ Reed, Michael Carter II, and Ahmed Gardner from left to right. Safeties Lamarcus Joyner and Jordan Whitehead are both high, showing a shell with the middle of the field open (MOFO). 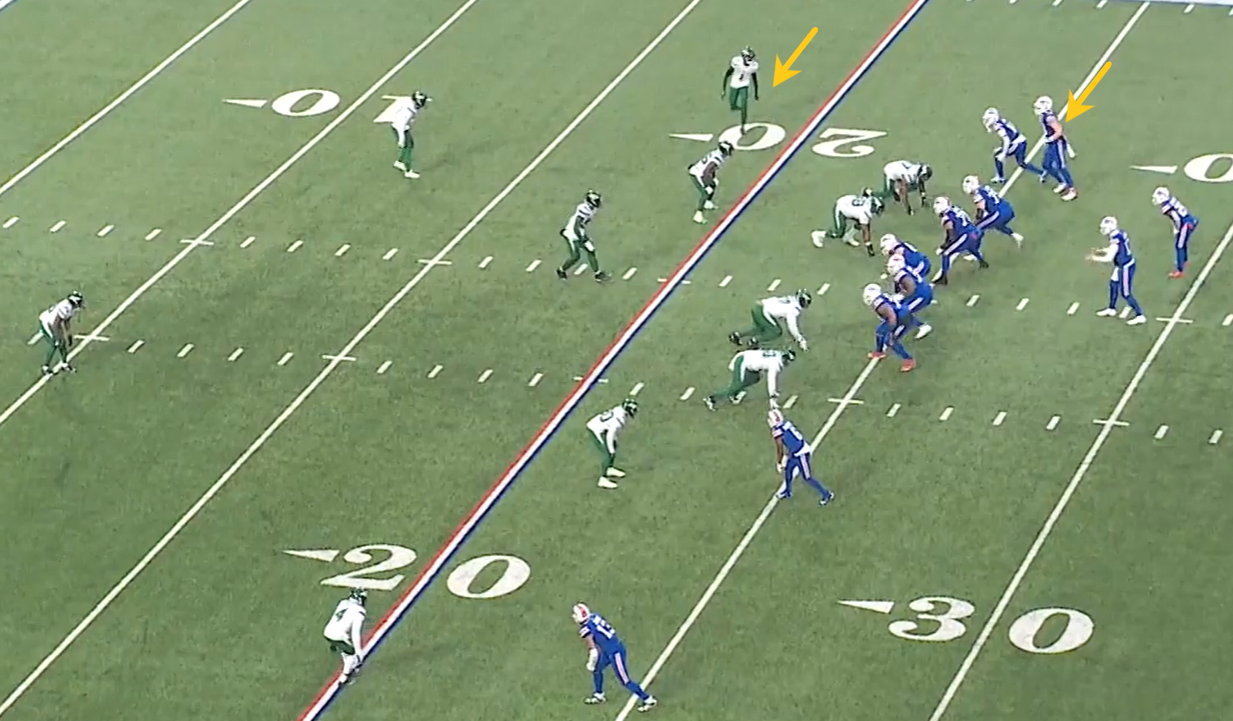 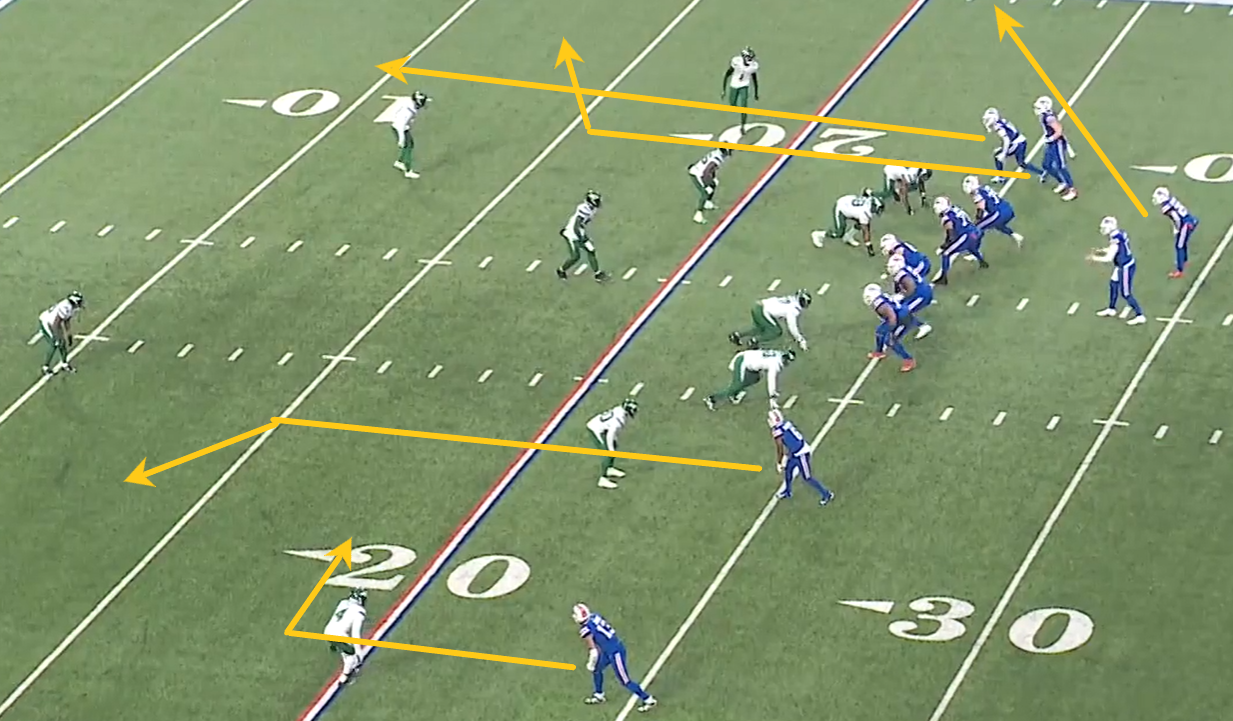 Davis runs a 7-yard dig while McKenzie runs a corner route. On the boundary side, Singletary, Diggs, and Knox run a version of a sail combination. Diggs runs a go, and his gravity pulls Gardner and Whitehead. Singletary runs to the flat. Knox’s out route splits the two by depth. 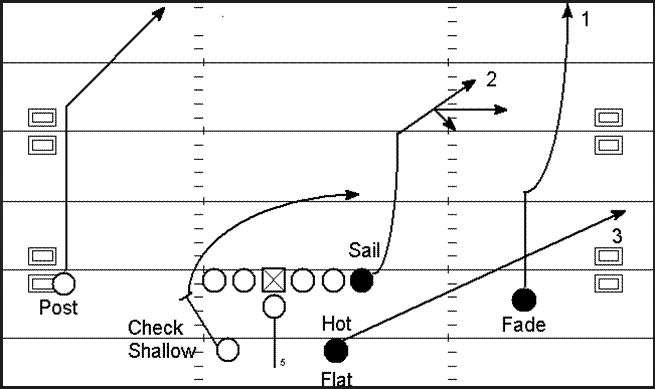 From The Weekly Spiral 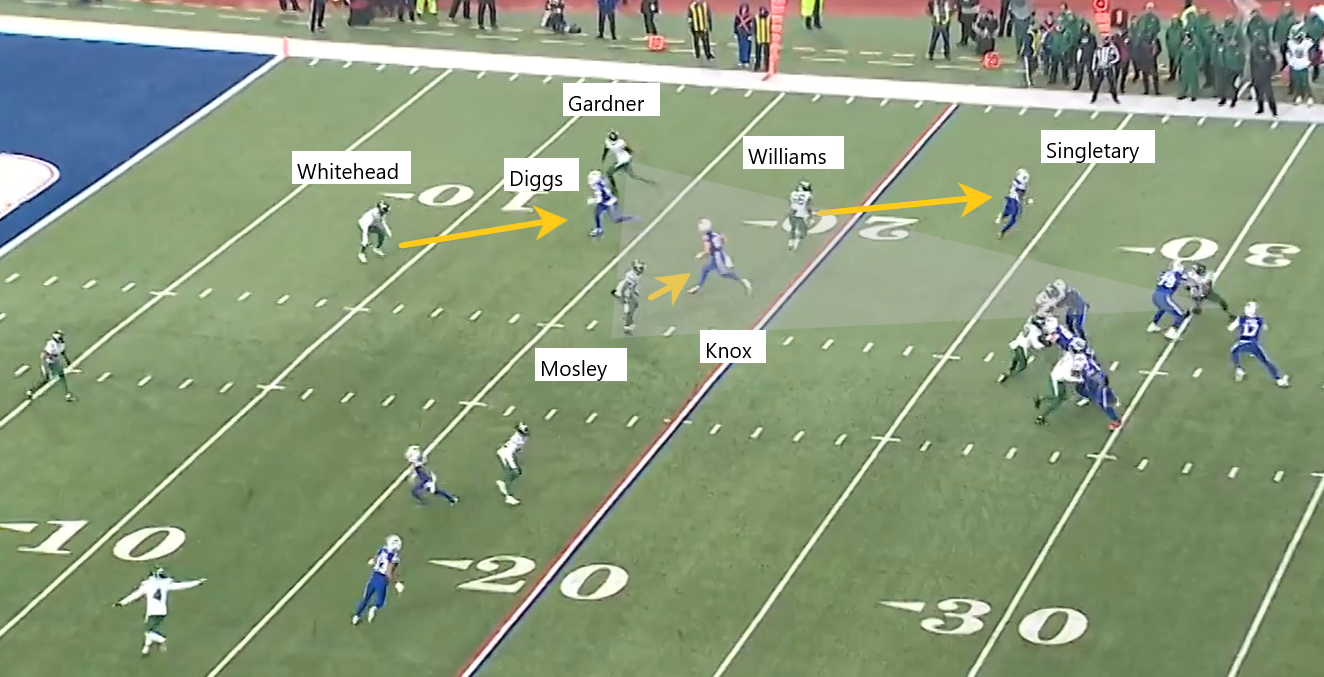 The Jets appear to be in Cover 4. Williams comes up on Singletary in the flat. Whitehead brackets Diggs with Gardner. Mosley should be picking up Knox, but he appears to be caught flat-footed at this point. From this moment, Allen knows the out should be open.

The Jets’ DL is DE Carl Lawson, DT Nathan Shepard, DT Sheldon Rankins, and DE Bryce Huff. Both Ds are in wide 9, and the DTs are at 4i. 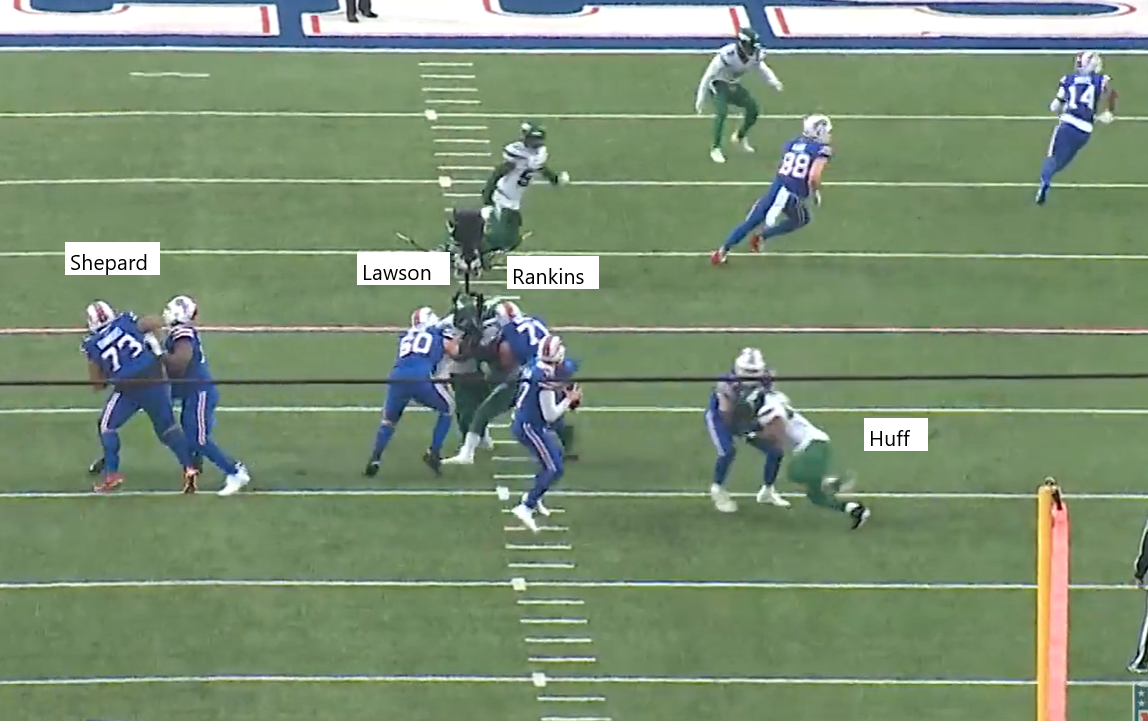 On the snap, Lawson stunts to the inside. Bills’ LT Dion Dawkins lets him go and assists RG Rodger Saffold with Shepard. C Mitch Morse successfully picks up Lawson. Rankins attempts a spin move that doesn’t phase Bills’ RG Ryan Bates. In fact, Morse’s block leads Lawson into Rankins, causing both defenders to fall over. RT Spencer Brown does just enough on Huff to let Allen have time to connect with Knox.

In the background, Knox has begun his break. 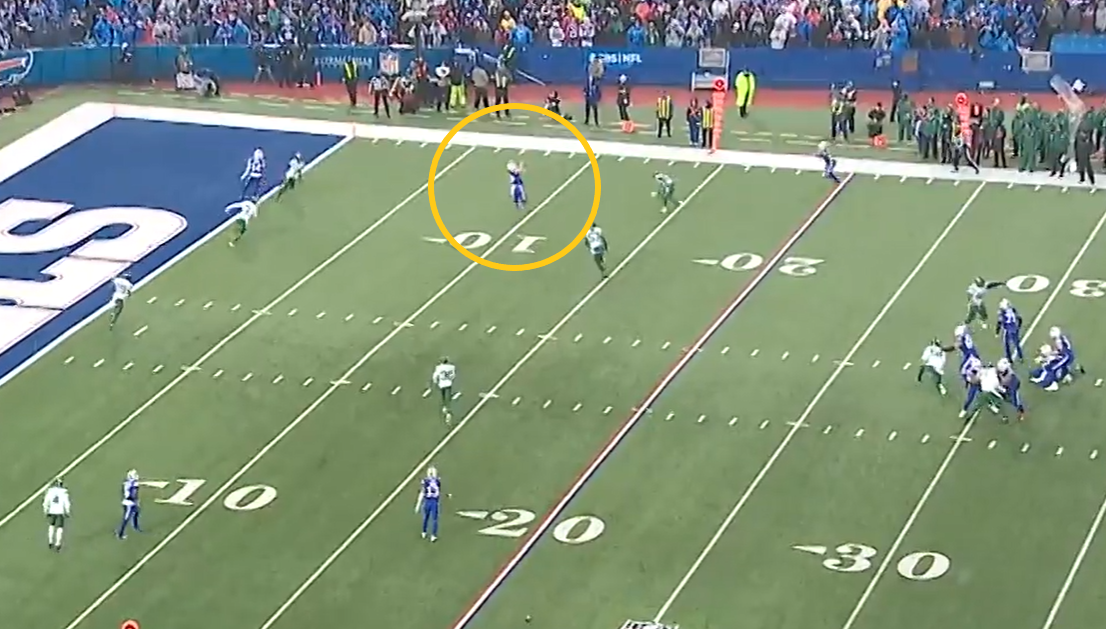 When Knox catches the pass, there isn’t a Jets defender within 5 yards. 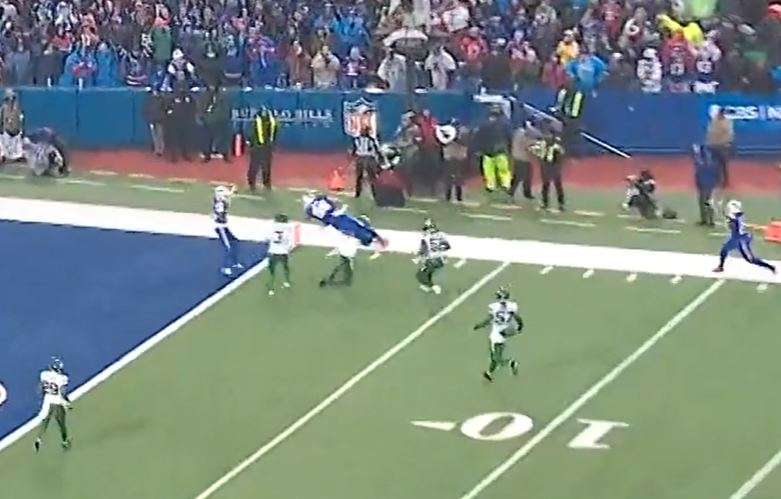 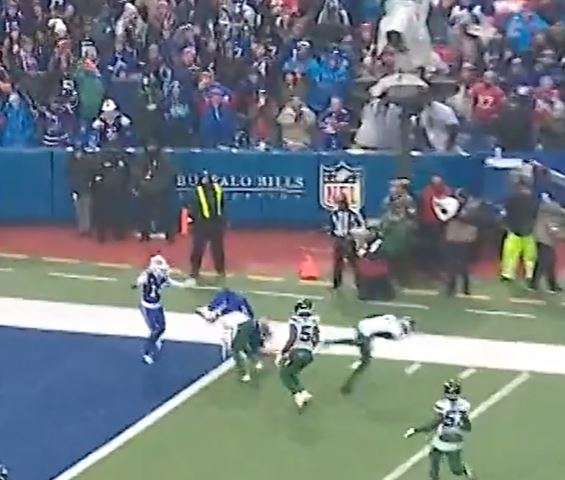 With a move that should only be possible in the WWE or anime, Knox wipes out Whitehead with what I am told is a somersault plancha (if that is not really a thing, then Ant Prohaska played me like a banjo in Deliverance). Amazingly, Knox managed to land in the end zone for the first TD of the game.

Despite the public consensus being Knox is having a down year, the Bills rank second in the NFL in total EPA when targeting a TE out of 11, their primary offensive formation (SIS). Only the Eagles at 15.37 beat out the Bills 12.82. The Bills also have the second-best positive play rating in this scenario at 76.2%, and the team ahead of them, Baltimore, only has two qualifying pass attempts.

Like fans’ expectations for Gabe Davis, some over-excited projections are negatively influencing our ability to enjoy what is already an excellent season: the Bills have the best record in the AFC with only a month left in the season and have been the Super Bowl favorites for the vast majority of that time. We should work to ensure we have enough self-awareness to keep our expectations from tarnishing an undisputedly great season.