The Buffalo Bills thoroughly demolished the Pittsburgh Steelers in Week 5, and the victory was so complete that it’s difficult to find a “pivotal” moment after Gabe Davis’ 98-yard TD catch on the first drive of the game. Even when the opponent isn’t really up to the task, we can still learn about the Bills and their play concepts.

In this case, let’s look at a recognizable run concept but with a pass tag that the Bills used a few times on Sunday. 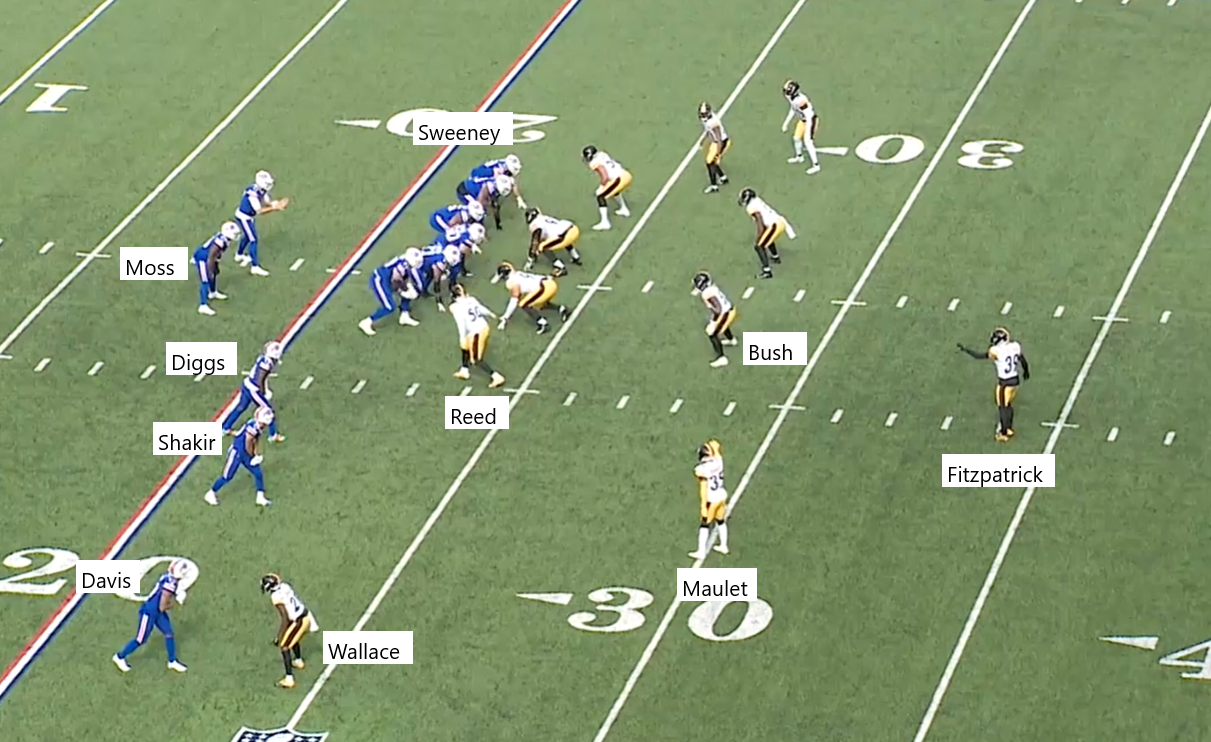 The Bills are in 11 personnel with Tommy Sweeney at TE in-line to the boundary side and Zack Moss initially to Allen’s left in shotgun. Davis, Shakir, and Diggs are all to the field with Diggs in the slot.  Allen then had Moss switch to his right. With this motion, Maulet and Fitzpatrick begin to signal to Bush, who takes two small, seemingly uncertain steps toward the field right before the snap. 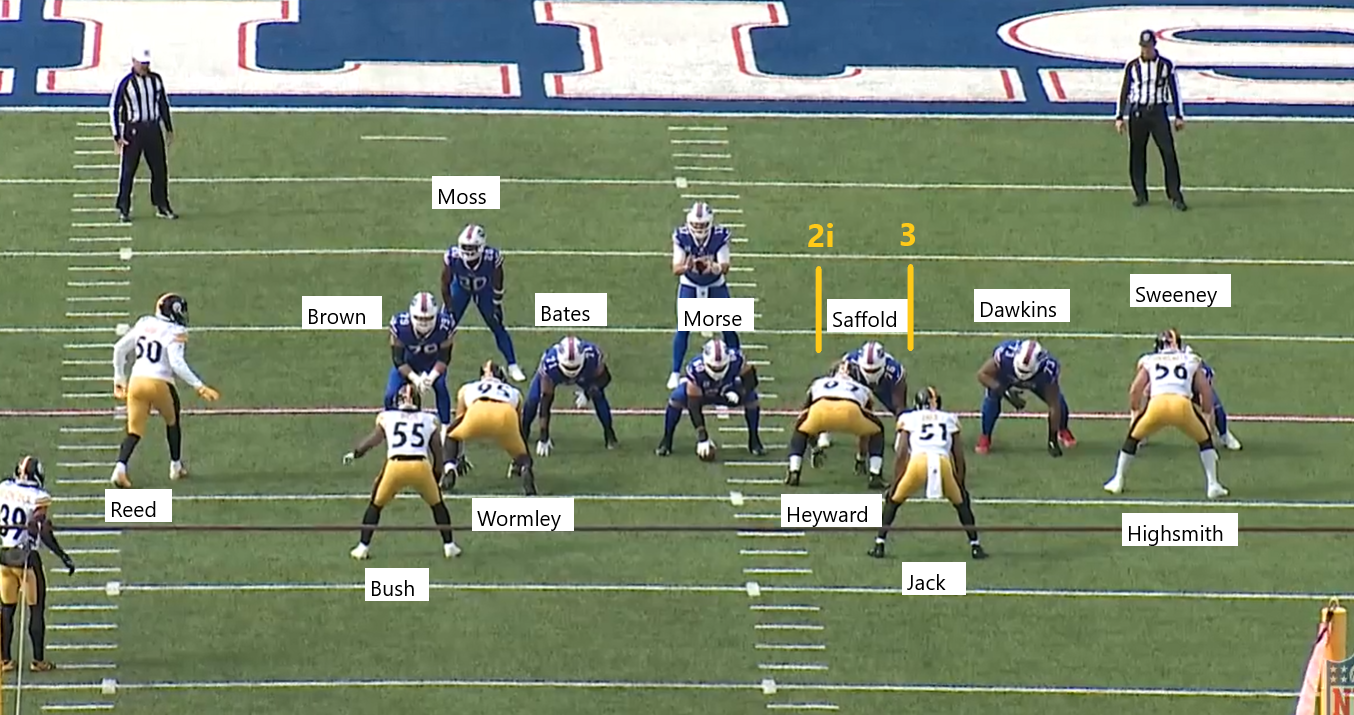 Moss’ motion also precipitated a move along the Steeler’s DL. Cam Heyward shifted from a 3 technique alignment to a 2i. If the play remained a run, that shift would be crucial. 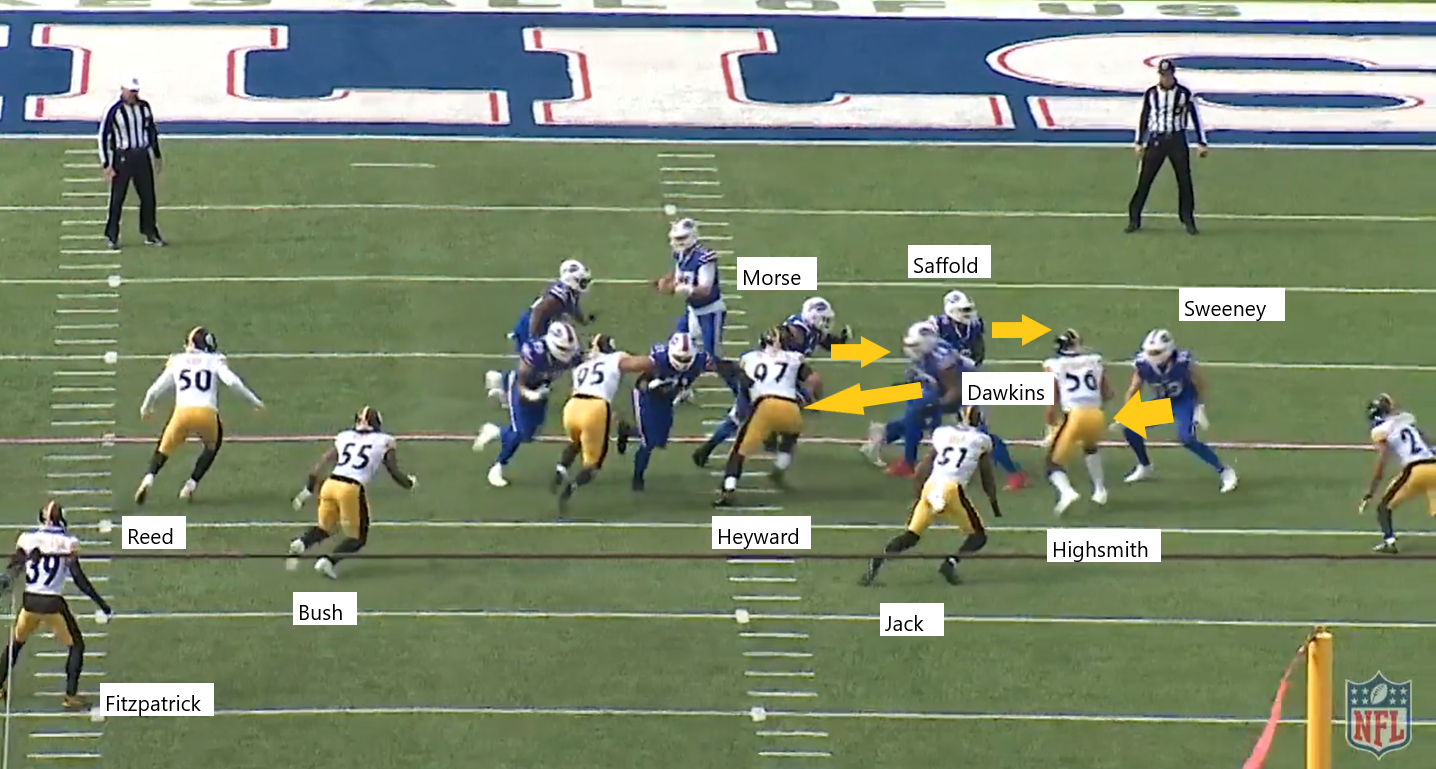 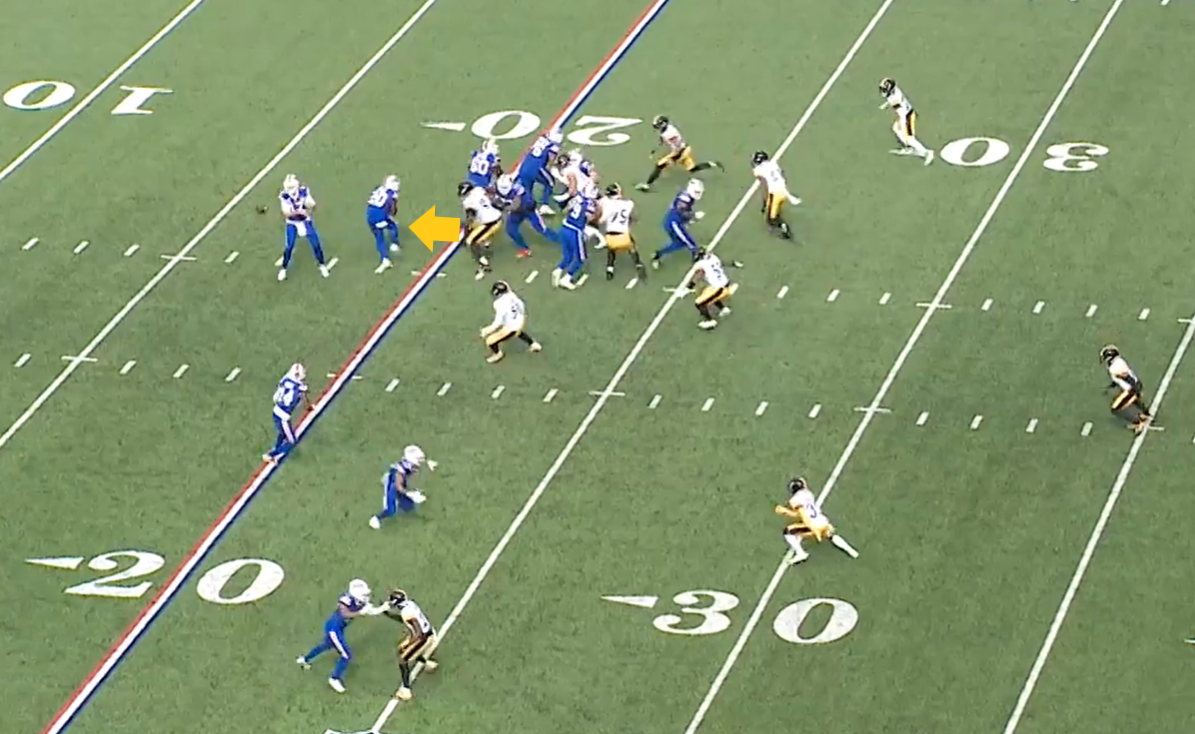 If Allen had handed off to Moss, it’s a TFL for Heyward.

But Allen didn’t hand off. Why? 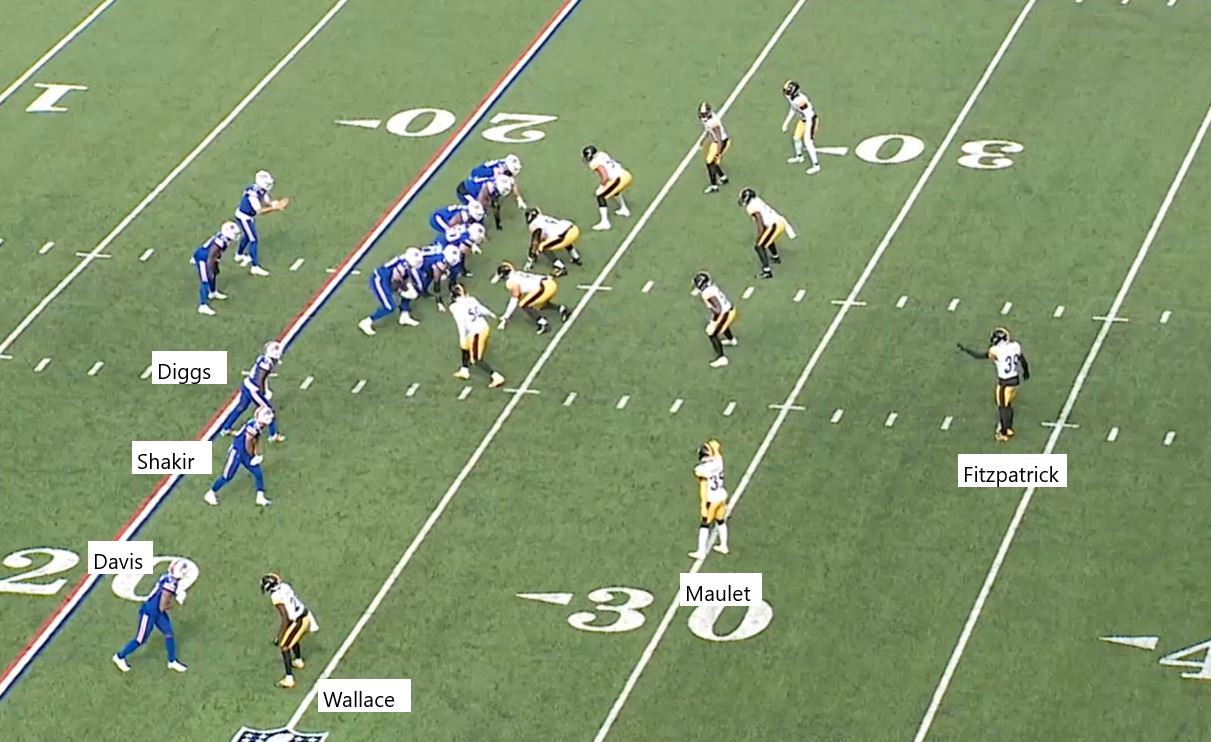 This version of the pin-and-pull run has a pass tag that Allen can switch to based on the defensive alignment. The Steelers have four down linemen, two linebackers, and five defensive backs. They are showing Middle of Field Closed (MOFC) with one high safety (Fitzpatrick). Based on the route type built into the tag – an immediate out to Diggs – Fitzpatrick is too deep. Wallace is in press coverage on Davis. Maulet is off on Shakir. It’s a numbers advantage for Buffalo, and Allen decides on the pass tag as soon as he sees it. 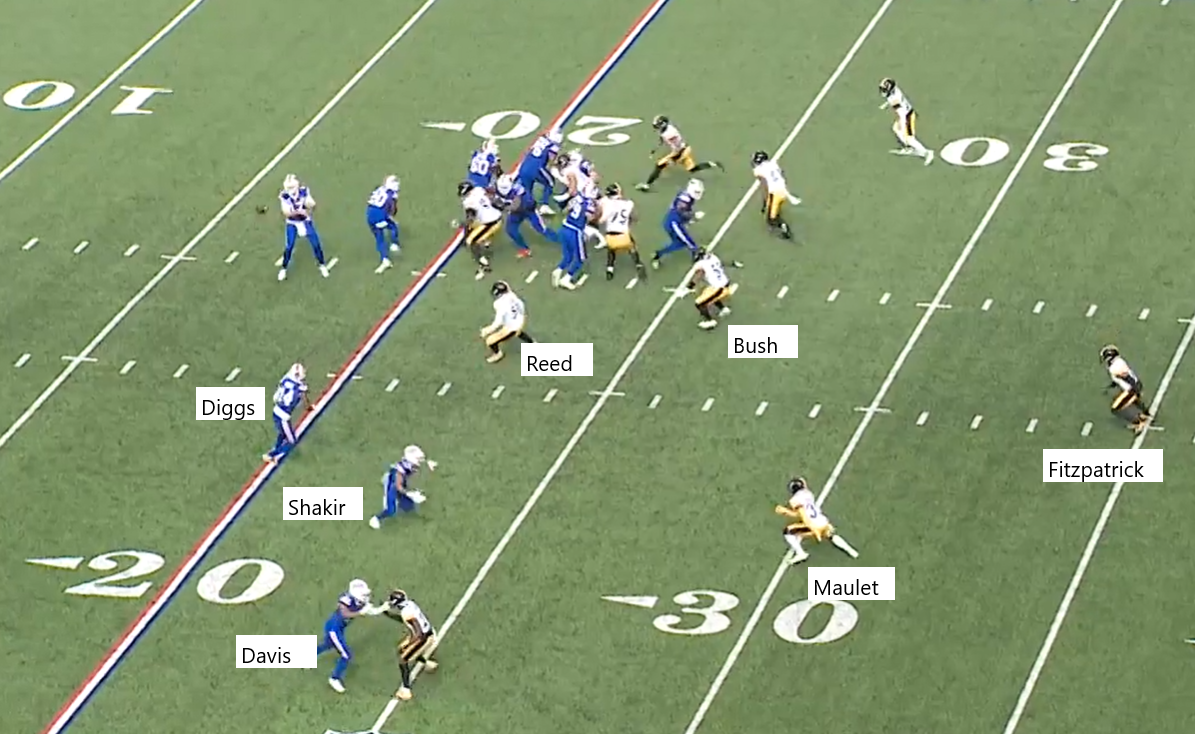 Reed and Bush have to honor the run fake. Reed stutter steps twice, before holding to watch Allen, and takes a step forward. Bush takes four steps up. Neither Reed nor Bush can reasonably cover the route after needing to process the run.

Davis has already begun to block Wallace, and Shakir looks ready to engulf Maulet. Fitzpatrick has begun to come forward, but as long as Diggs catches the pass, this is already a good gain. Diggs makes the catch and works to set up the blocks from Davis and Shakir. 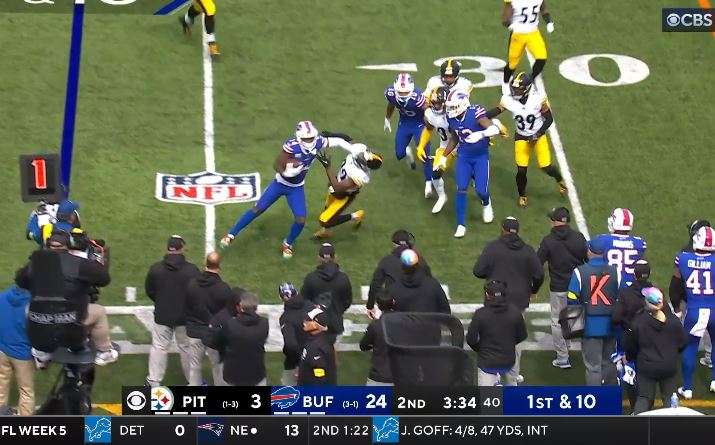 Then Diggs welcomes Levi back to Orchard Park. 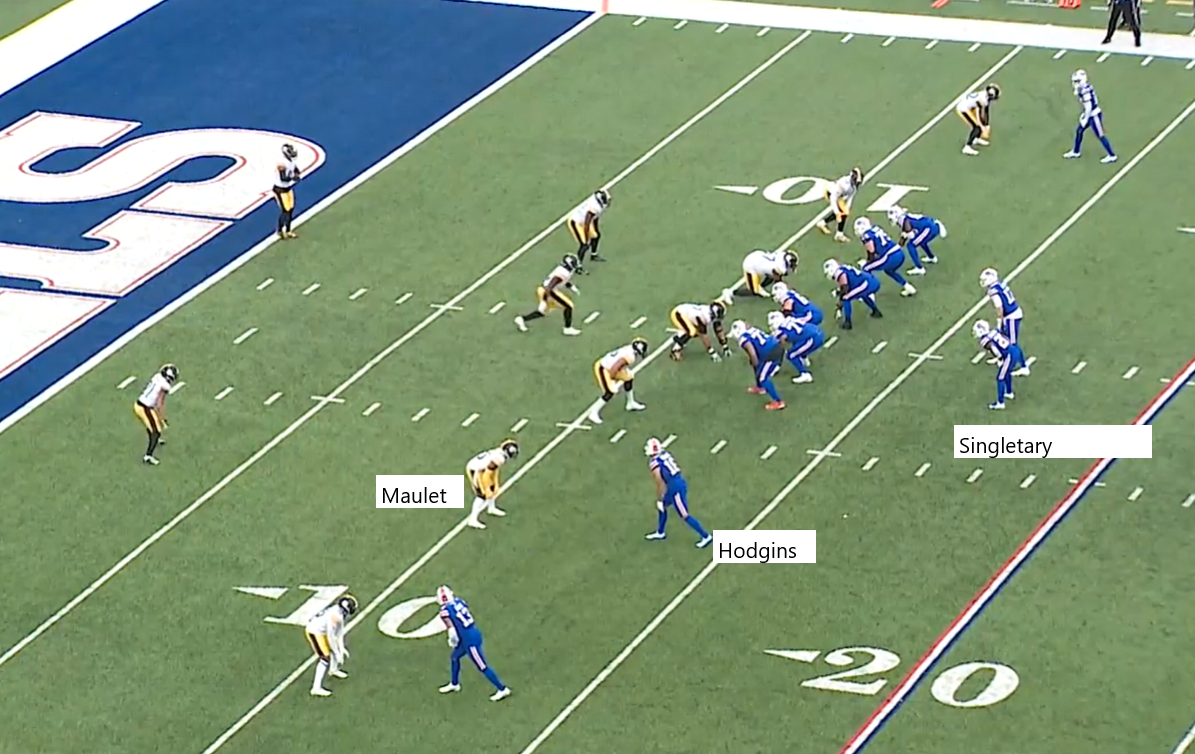 In the red zone on the PIT 12, with 6:10 left in Q3, the Bills are again running a pin-and-pull run with a pass tag.  Again, they are in 11-personnel, but the formation is different – wth Diggs wide to the boundary, Davis wide to the field, and Isaiah Hodgins in the slot. 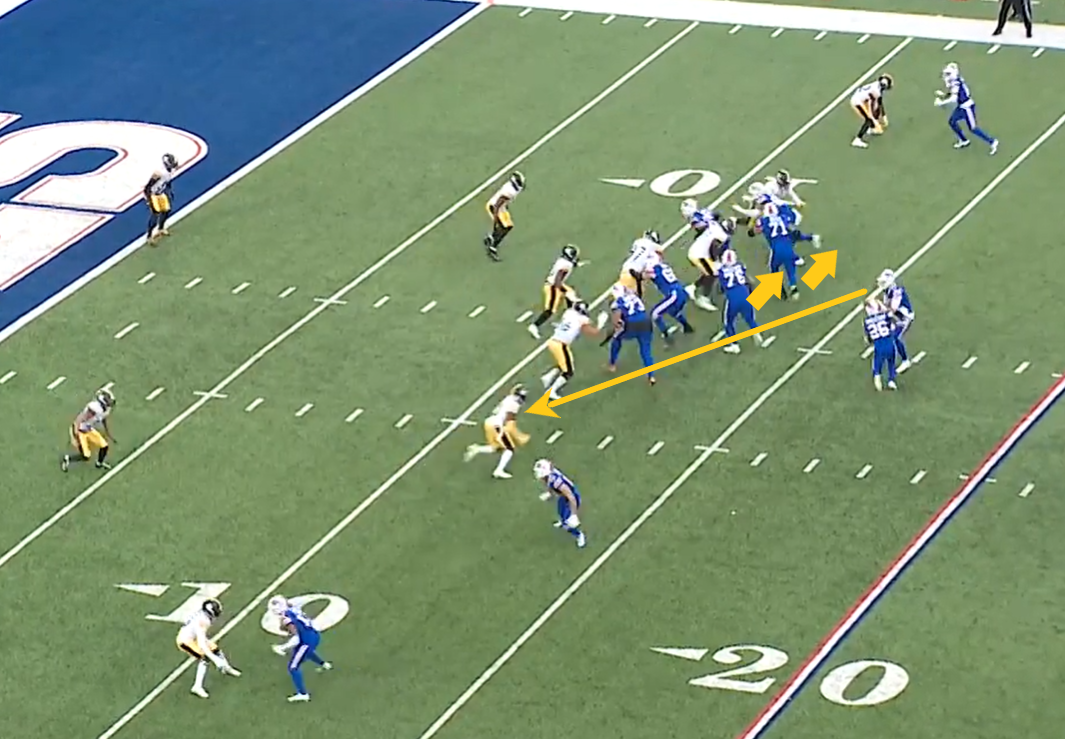 Saffold and Bates pull, and Singletary prepares to take the handoff, but Allen is reading Maulet, who is blitzing. 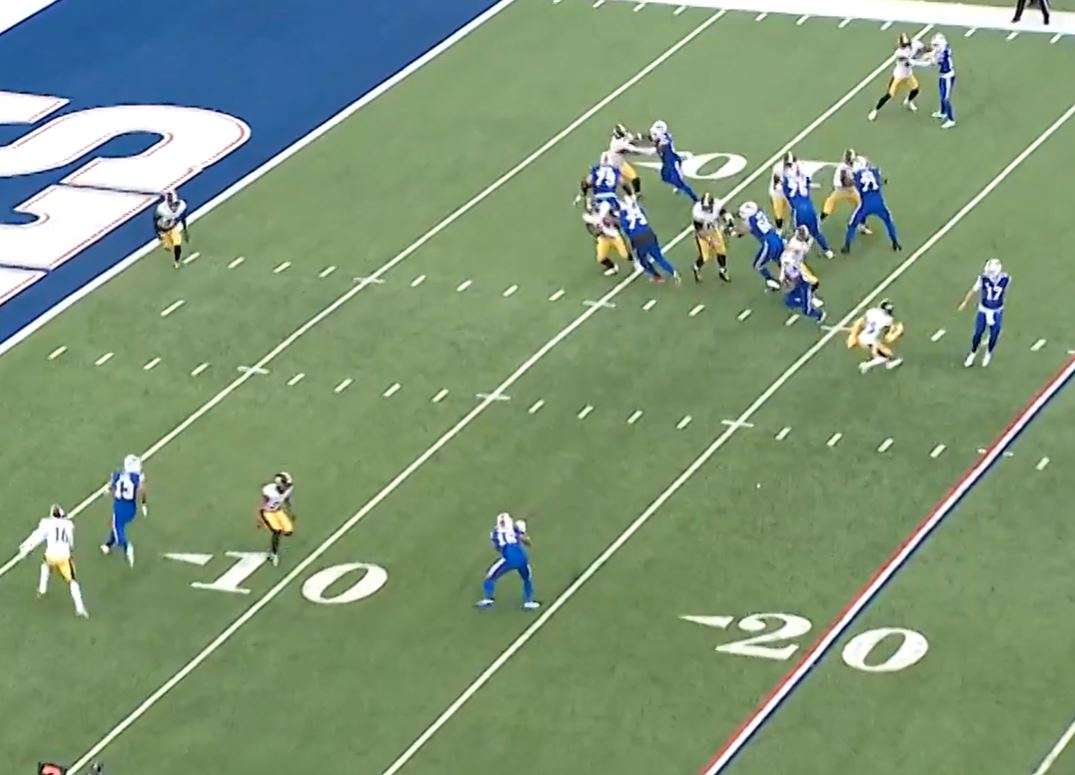 Hodgins moves wide, opens his chest to Allen, takes in the pass, and makes a nice move to pick up the first down. 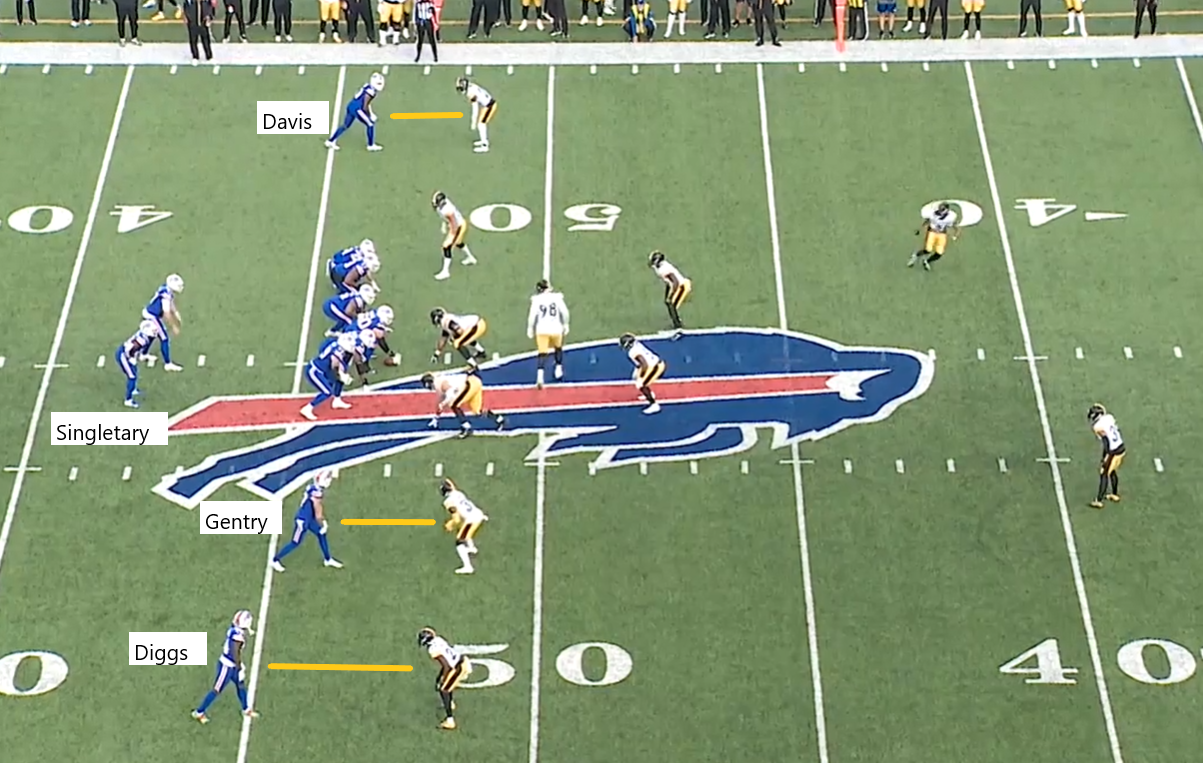 If you’re beginning to wonder if the Bills ever actually run with this play, they do – when they get advantageous looks. On 1 & 10 from the BUF 47 with 7:53 left in the second quarter, the Bills are in 11, but Pittsburgh is showing different coverage. The Steelers are in press on each WR and both safeties are high. The numbers advantage for the pass isn’t there. But when Morse and Bates pull, the Bills will have numbers to run’s play side. 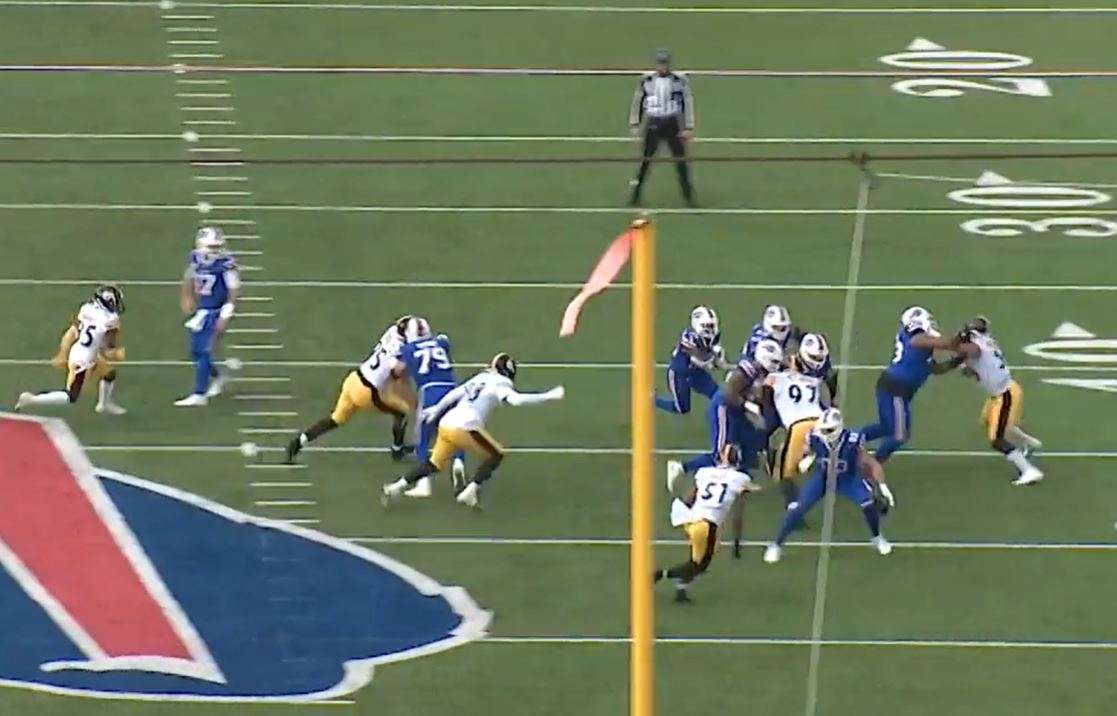 The picture shows a 5-on-3 advantage for Buffalo, but it’s more 6-on-5. Davis has locked up the DB to the right, and the Steelers’ safety is coming up for a tackle attempt. 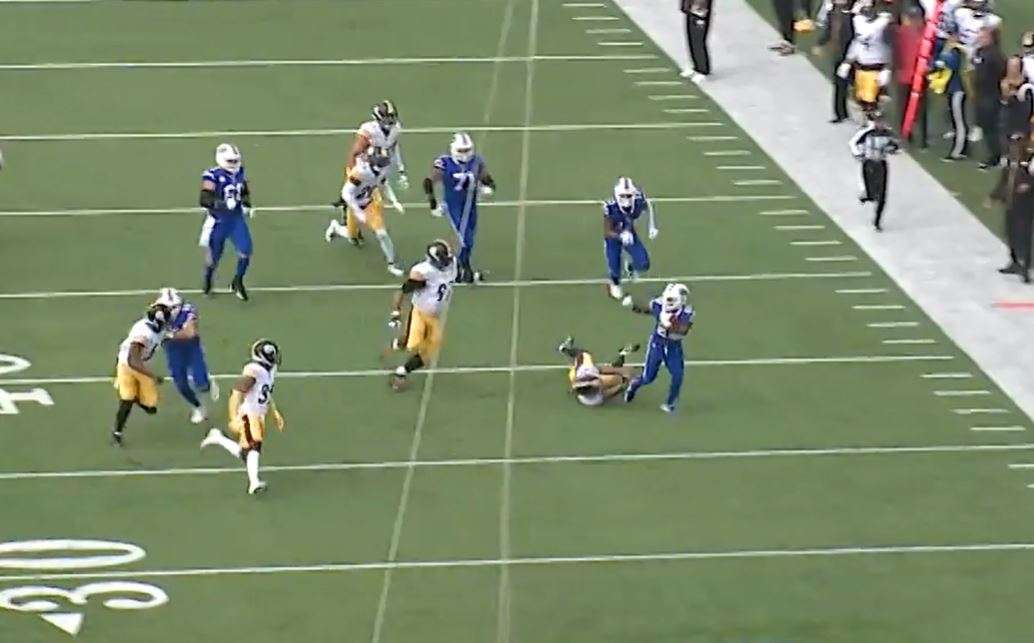 It was an attempt. Motor winds up with 23 yards on the run. 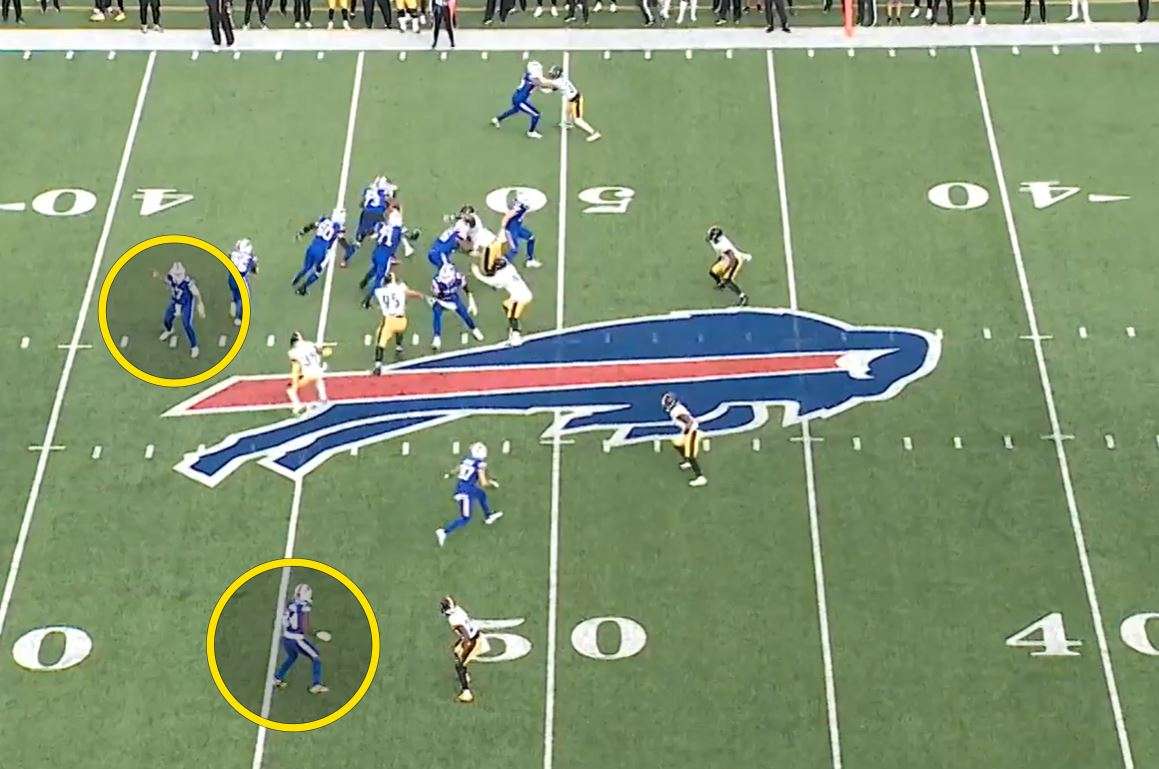 On the backside, Allen and Diggs continued through with the pass fake to help hold backside defenders in pursuit.

The options off of this play give Allen multiple opportunities to be right. These are just three examples of how Allen gets the offense into the right play based on the options given to him. Allen’s cannon and athleticism make the Bills one of the most dangerous offenses in the NFL, but his ability to read the defense and determine where the advantage lies is as dangerous as his arm or legs.