The Buffalo Bills struggled throughout the first half of their Week 4 matchup with the Baltimore Ravens, falling into a 20-3 hole before showing some signs of life with a touchdown just before halftime. Coming out of the half, the Bills were down 20-10 and Baltimore was getting the ball to start the third quarter. The Bills’ defense forced a quick three-and-out, and the offense thankfully continued the momentum and marched for a field goal to get within one score.

On Baltimore’s next possession, the defense needed another stop to give the offense a chance to fully seize control of the game. 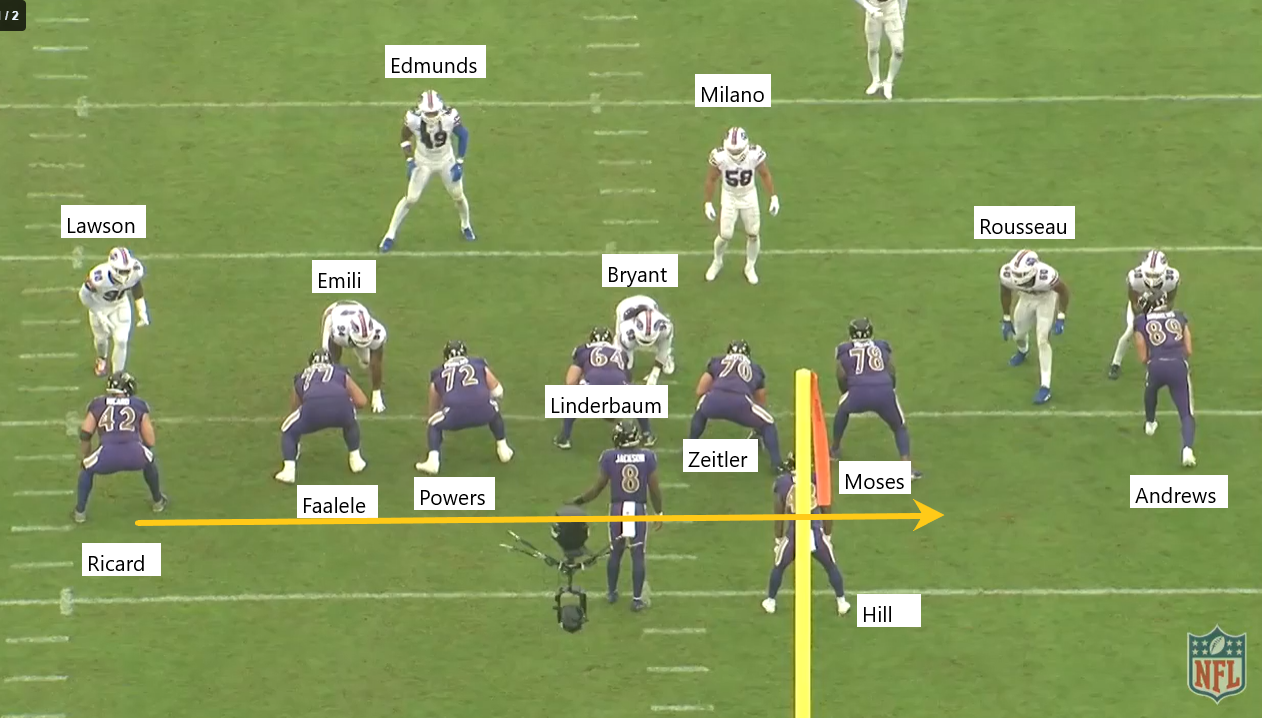 Baltimore starts the series in 21 personnel with RB Justice Hill, FB Patrick Ricard, TE Mark Andrews, and WRs Devin Duvernay and Demarcus Robinson wide to the left (not pictured). Pre-snap, Ricard motions from attached left to attached right. His motion changes the strength of the formation from the field to the boundary. The “field” and “boundary” sides are determined by which hash mark the ball is placed on. The boundary side is toward the closest sideline, with the field side opposite. 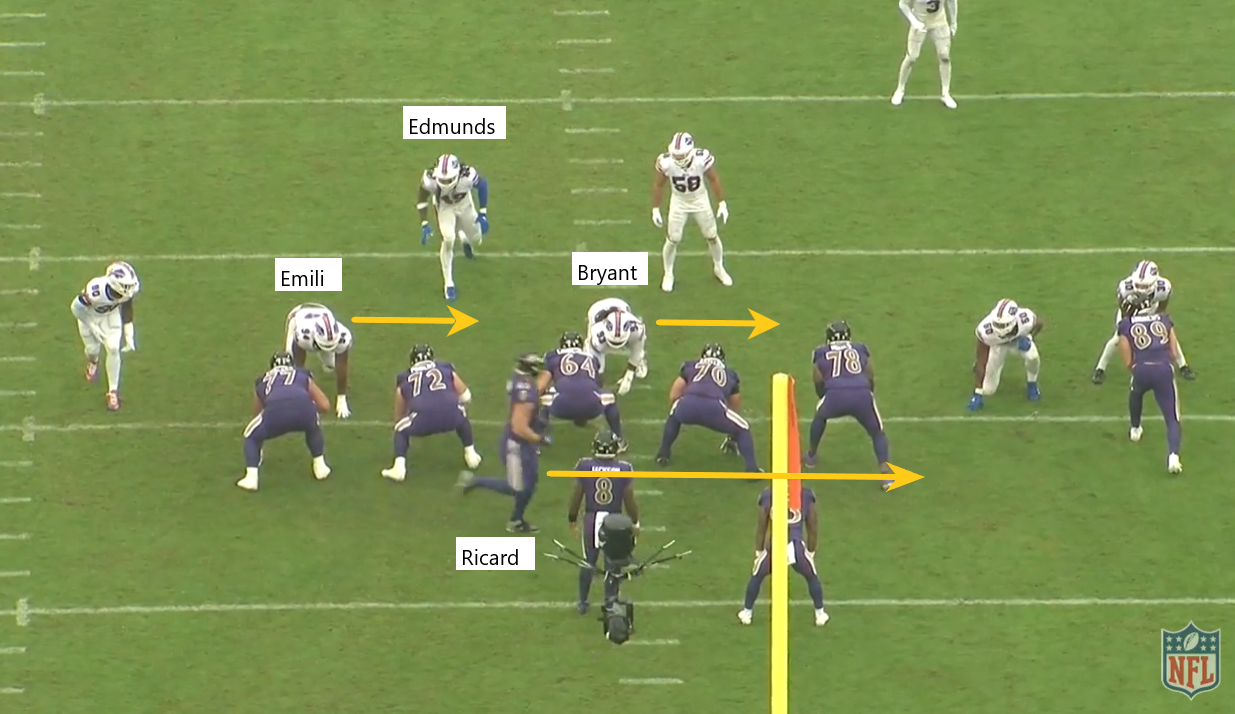 As soon as Ricard starts in motion, Tremaine Edmunds reminds the defensive tackles, Prince Emili and Brandin Bryant, to switch the over front. An over front calls for a weakside 1 technique and a strongside 3 technique. When Ricard motions, it switches the strength of the offensive formation, meaning the DTs have to switch their alignment correspondingly. Edmunds makes sure they recognize the change. The DEs remain in wide 9. 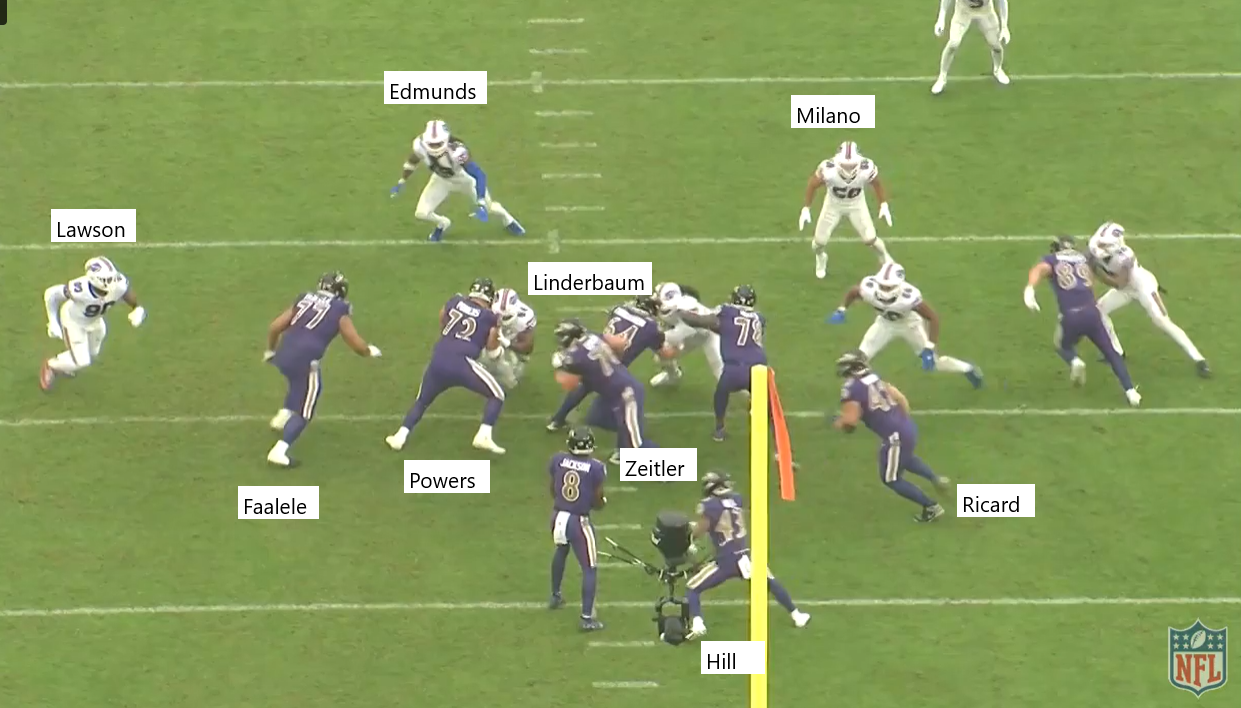 Faalele is moving to the second level, Powers and Linderbaum down block on the Bills’ shifted DTs, Zeitler pulls to lead left, and Ricard begins to come back across the formation again.

Lawson is already tracking Zeitler, and Milano is watching the mesh point between Jackson and Hill through Ricard, making sure the handoff happens and this isn’t a rollout for Jackson. 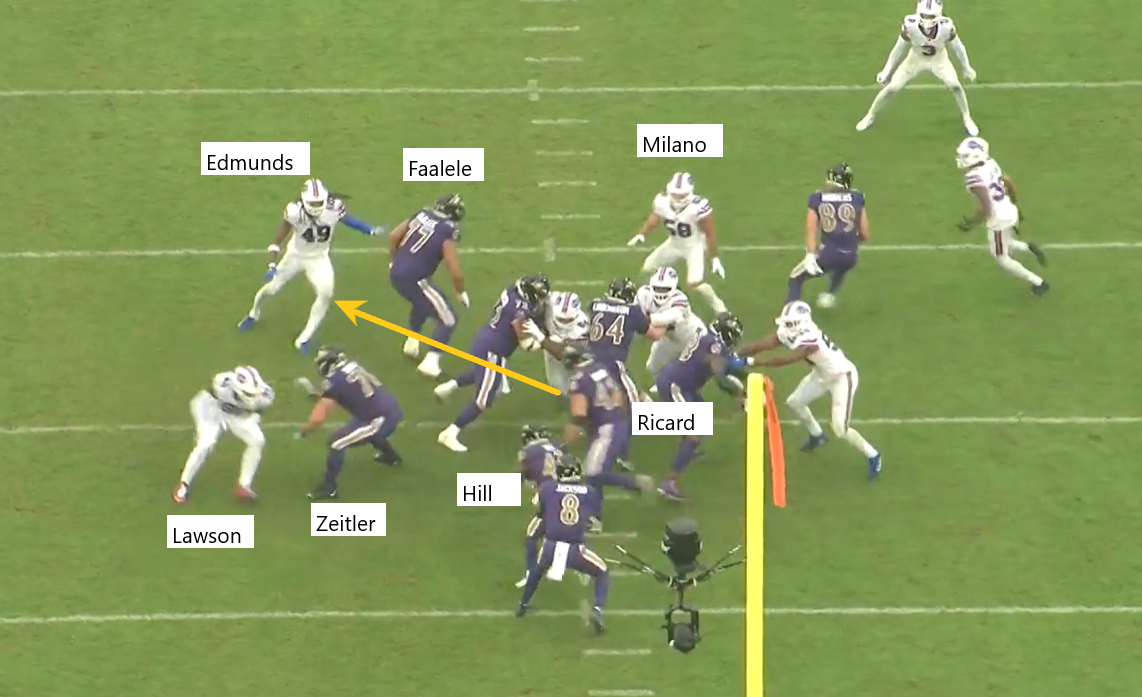 Jackson does hand off to Hill. Zeitler seals off Lawson while Ricard lines up Edmunds, who has filled the gap. Milano has tracked Ricard toward the field side. Look at Faalele. It’s hard to not look at him because he is an aircraft carrier of a human. He is 6’8″ and 380 lbs – none of that is a typo. And this aircraft carrier has a bead on Milano.

The thing about aircraft carriers? They’re really hard to maneuver. Milano sees Faalele’s block coming, stays perpendicular to him to avoid giving Faalele a wide target to block, takes two steps forward and one to the side to skirt around the giant Raven and make the tackle. 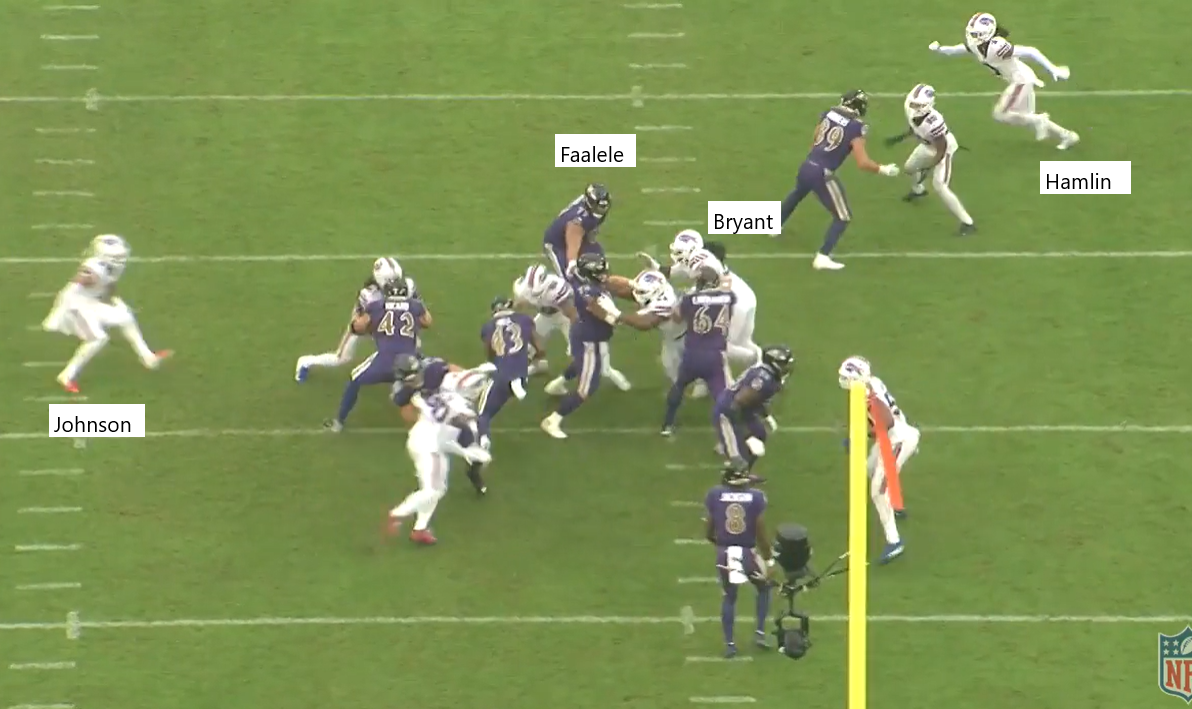 It’s a good thing Milano read the play as well as he did and used his quickness to deaden Faalele’s size advantage. Imagine if Faalele had been able to land the block. Maybe Johnson or Hamlin can track him down, but with a full head of steam into the second level of the defense, Hill probably has an explosive run, if not a momentum-swinging touchdown.

Both of the Bills’ linebackers had outstanding games versus the Ravens.  This play doesn’t stand out and won’t show up on any highlight reels, but this otherwise innocuous four-yard run from Justice Hill displays their football IQ, leadership, and athletic talents. And the Bills needed every last ounce from everybody to complete the big comeback.