The Buffalo Bills took on the division rival Miami Dolphins on Sunday with first place in the AFC East on the line in the young 2022 NFL season. The game did not go as hoped for a wide variety of reasons, some within the Bills’ control, others not. Nobody is alright with losing a game to a division rival, but there were some positives to pull from this game. 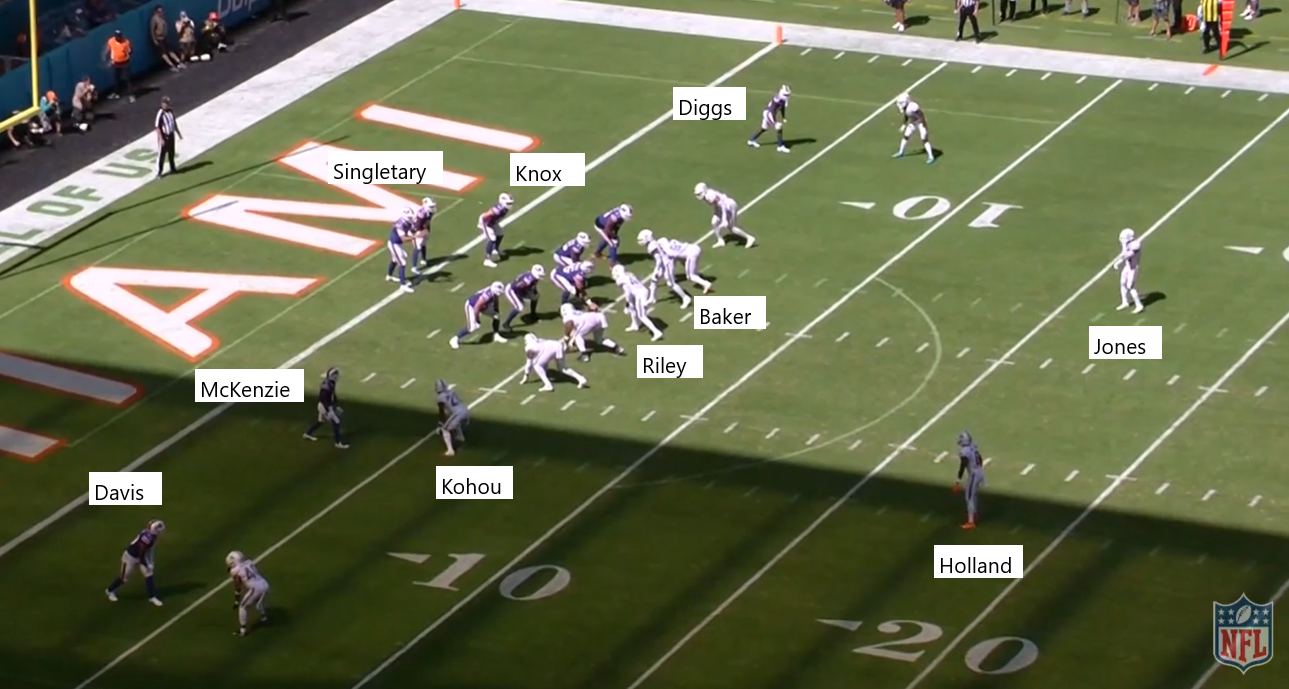 The Bills’ first drive in the second half came after the defense had forced the Dolphins into a short four-play drive. However, Miami punter Thomas Morstead pinned the Bills down at the BUF 2. After an incomplete pass and a three-yard Devin Singletary run, the Bills faced 3rd & 7 on the BUF 5.

The Bills come out in 11 personnel (1 RB, 1 TE). This alignment has Stefon Diggs and Gabe Davis wide, Isaiah McKenzie in the slot, Dawson Knox at H-back, and Singletary next to Allen in the shotgun.

Miami’s defense has three down linemen, three linebackers, three cornerbacks, and two safeties, both deep. Linebackers Duke Riley and Jerome Baker mug the A gaps. Cornerback Kader Kodou has McKenzie in the slot. 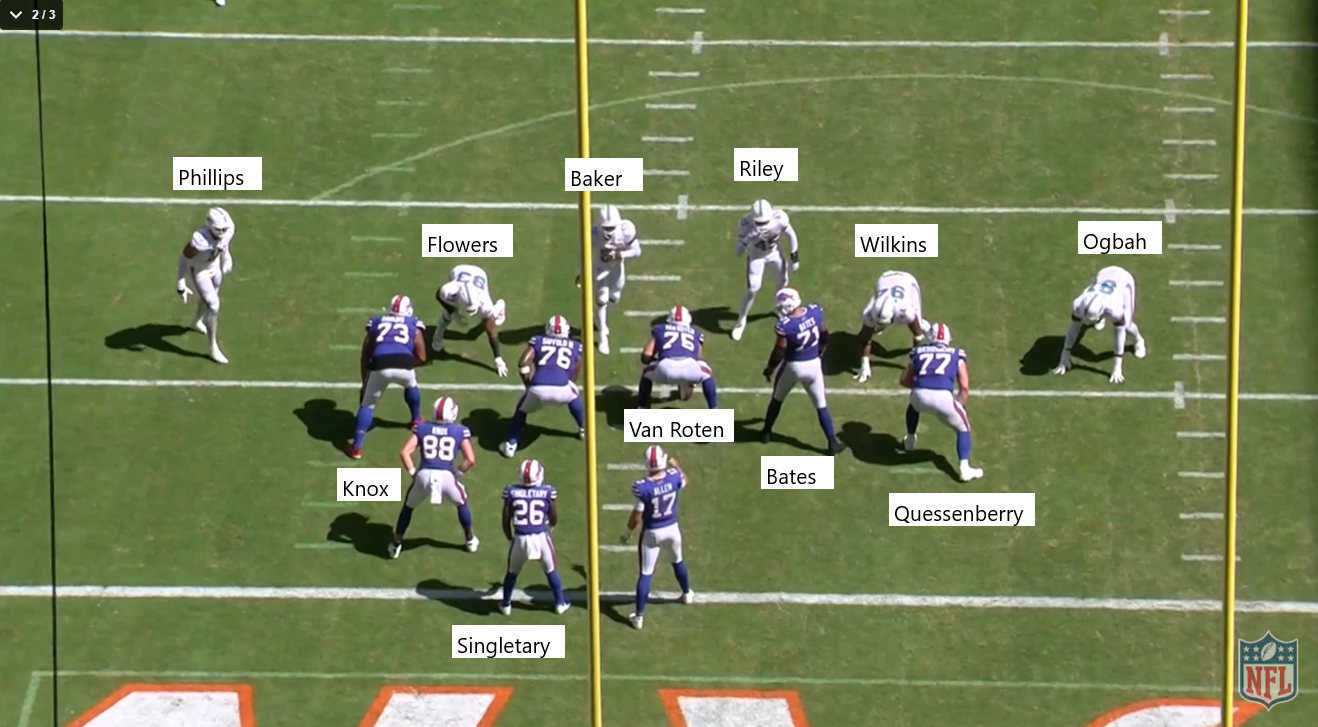 Notice Bates standing while the rest of the Bills’ offensive line has dropped into position. Bates is waiting for a signal from Allen that he is ready for the snap. Once Allen has given the ok, Bates gets into his stance and shoots out his left arm, which signals center Greg Van Roten to snap. This motion was how the Bills handled the snap throughout the game, and it was not particular to this play. 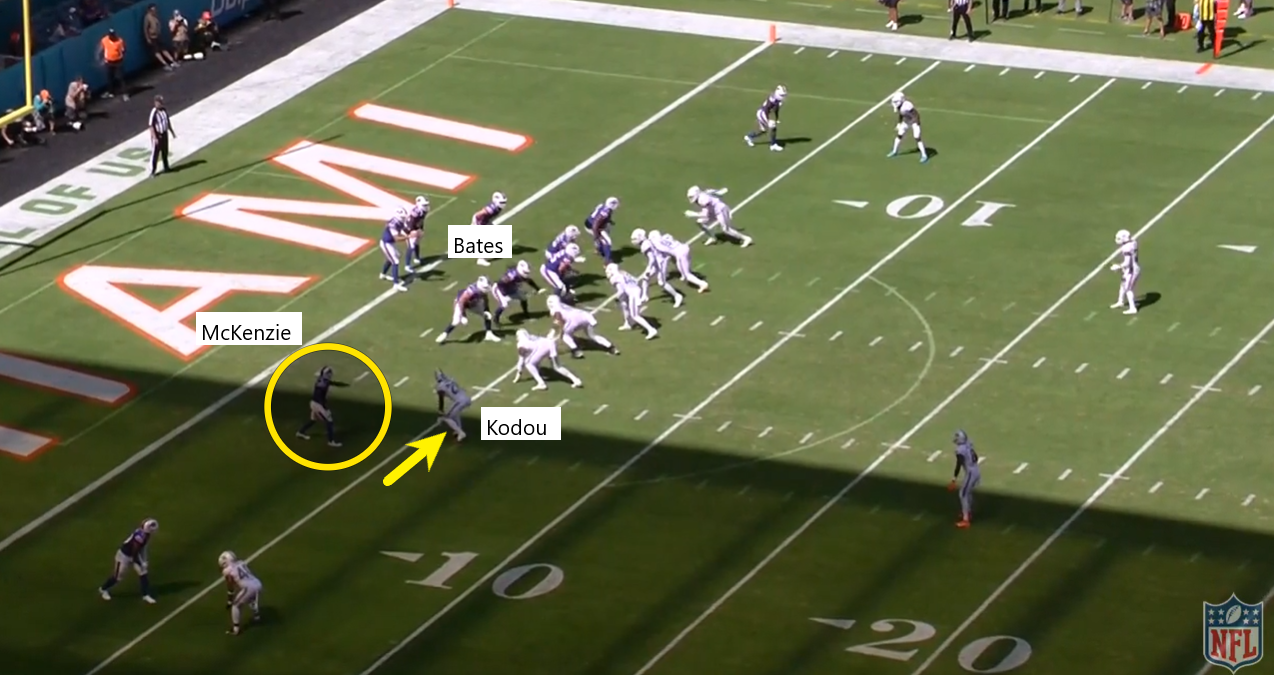 When Kodou sees Bates’ arm shoot out, he slides two-to-three steps to his right and begins to lean forward. McKenzie points out the cornerback’s motion, trying to alert Allen. 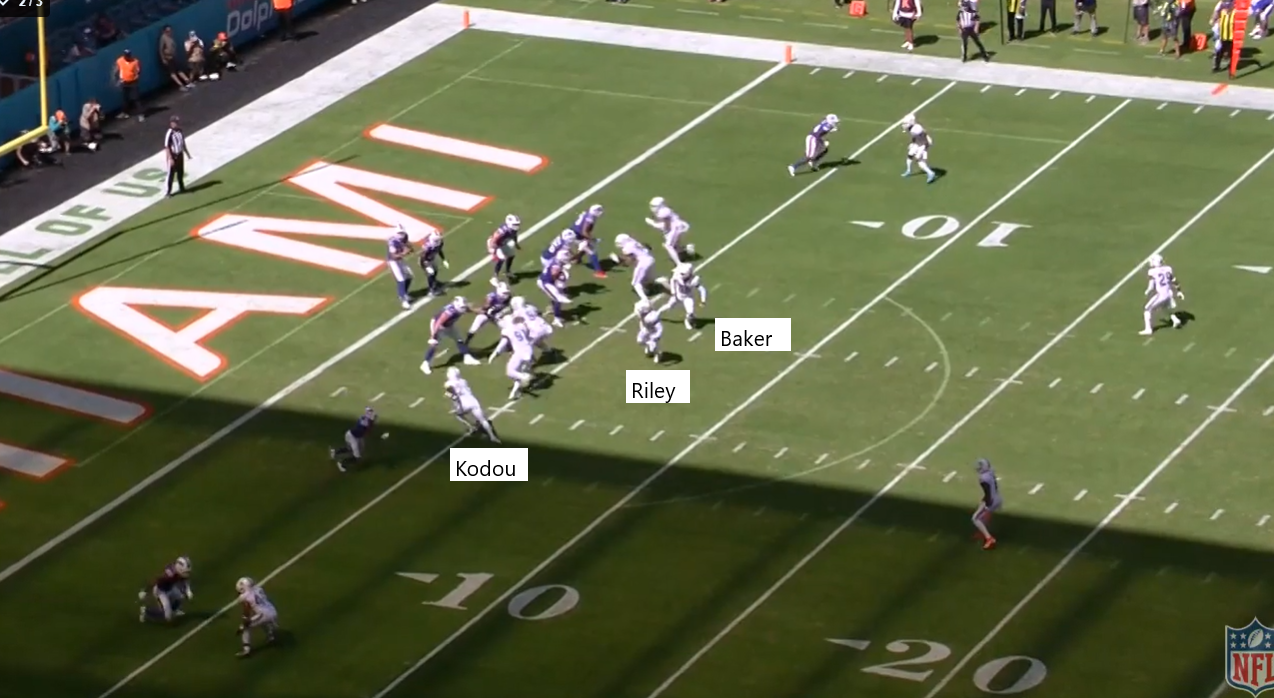 McKenzie was correct, and Kodou blitzes. At the same time, Riley and Baker drop back, both immediately shifting to the field side. 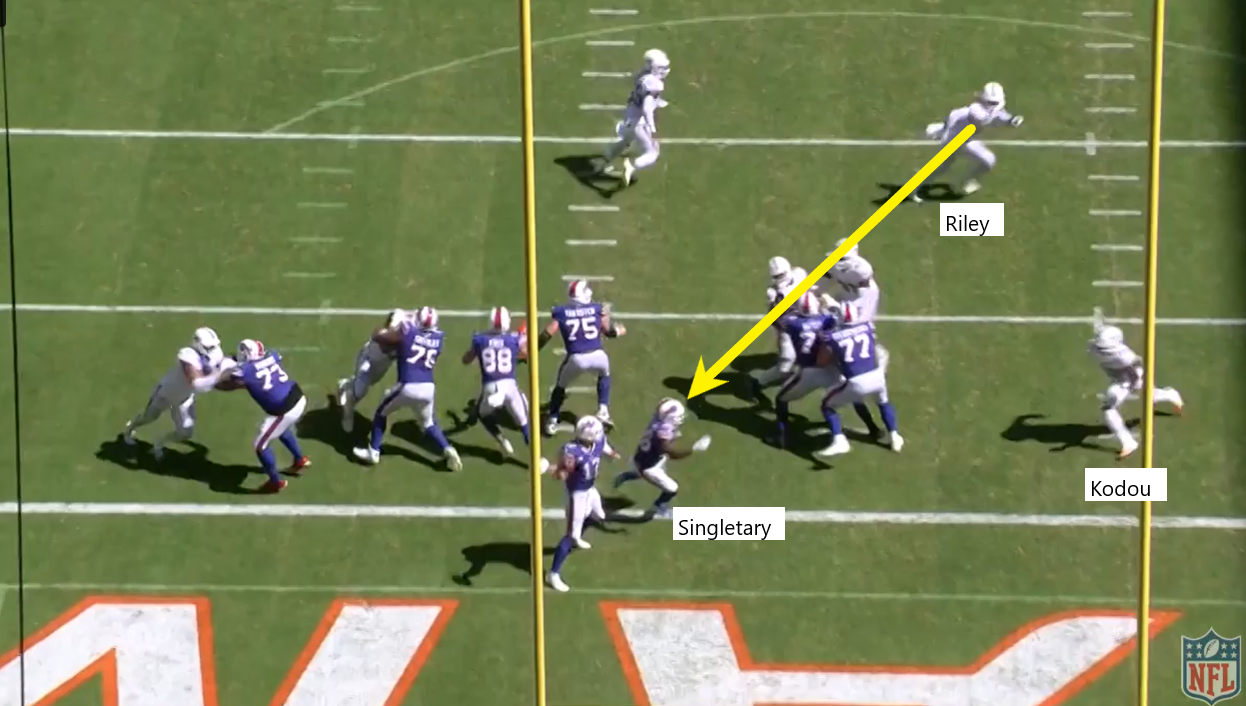 Riley is watching Singletary to see if the RB comes out into a route. This is one of the adjustments the Dolphins made to account for Singletary’s receiving success in the first half. When Riley sees Singletary stay in the backfield to pick up Kodou, he immediately sprints out to cover McKenzie.

Kodou is rushing free, but the offensive line has the rest of the Dolphins’ defenders well-blocked. 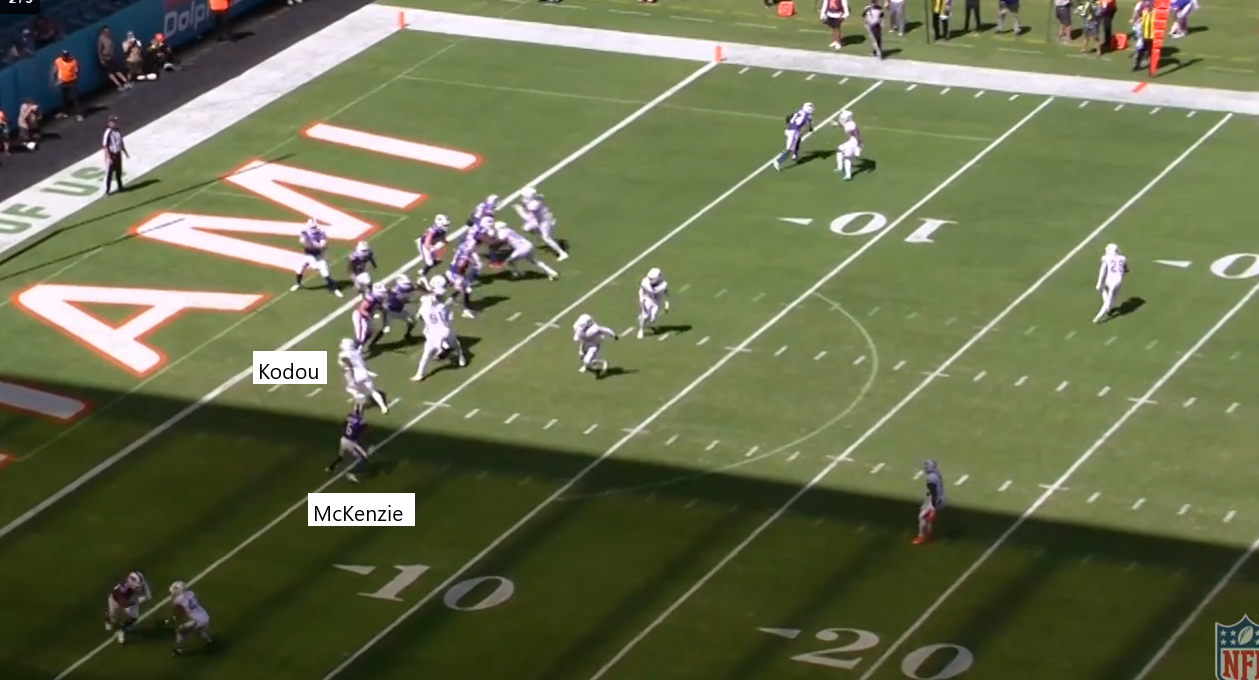 Knowing Kodou is blitzing, McKenzie makes a sight adjustment, breaks off whatever his route would normally have been, and turns his head and body to Allen to present an outlet. Singletary and Knox staying to block, combined with the Dolphins’ tight press coverage on Diggs and Davis, leaves McKenzie as the only quick option. 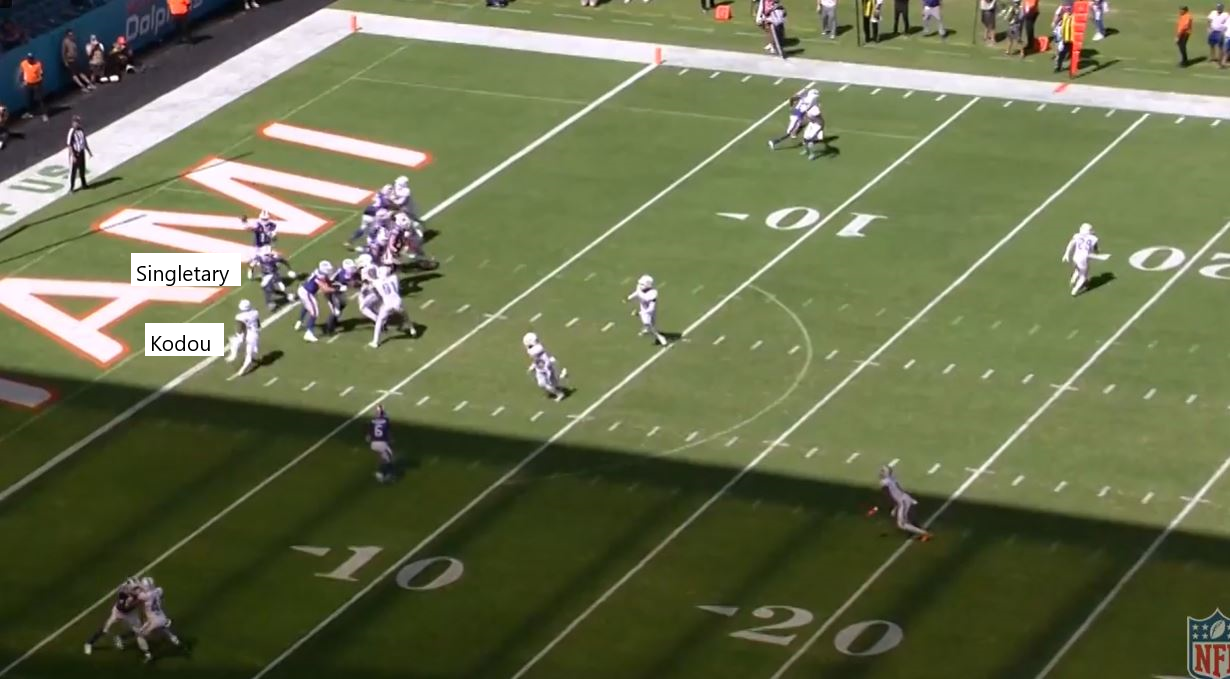 Allen recognizes the blitz immediately and fires a dart to McKenzie.

Singletary rushes across the formation to pick up Kodou. Allen unleashes the pass before Kodou can get too close, but Singletary’s presence also slowed him down. 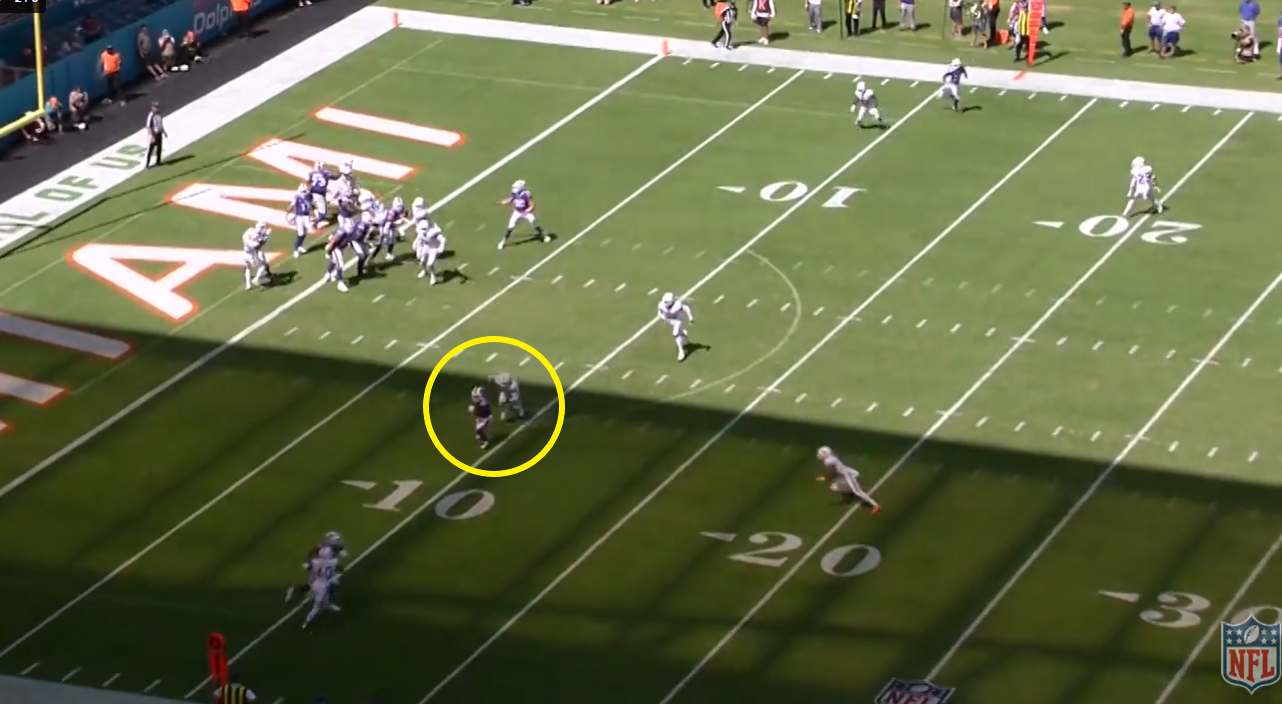 McKenzie takes in the pass and quickly runs away from Riley’s pursuit because Allen has perfectly placed the ball to turn him away from the hit. McKenzie surges forward for the last four yards to secure the first down.

At this point in the game, the score was tied 14-14, but the because of the good punt from Morstead, the Bills needed to get out of the shadow of their endzone to at least flip field position in what was shaping up to be a difficult, close fought game. Miami had a variety of pressure packages that started with their linebackers mugging the A gaps. This play was a version out of that formation. McKenzie’s awareness, Allen’s recognition, and solid blocking enabled the Bills to keep moving on a drive that saw them take the lead.

No loss is a good loss, but there were a lot of positives to take away from the Bills’ first loss of the season. An injury-riddled defensive backfield held up admirably against two of the fastest wideouts in the NFL. Allen was once again remarkable, and McKenzie demonstrated his growth as a wide receiver. Through three games this season, the Bills have generated the most EPA in the league on third down targets at 0.91 EPA/target. Second place is the Eagles at 0.79, and the Dolphins come in third at 0.78 (SIS). McKenzie’s high football IQ on this play helped grow those numbers.

Let’s all put this game behind us, prepare for the Ravens, and plan our revenge on the Fins for Dec. 18th.