The Buffalo Bills beat the Los Angeles Rams 31-10 in Week 1, and it really wasn’t close. For Bills fans, it was a thrilling way to open up the 2022 NFL Season, as the team marched down the field on their opening drive and scored the first touchdown of the year. Let’s dive into wide receiver Gabriel Davis’ 26-yard score. 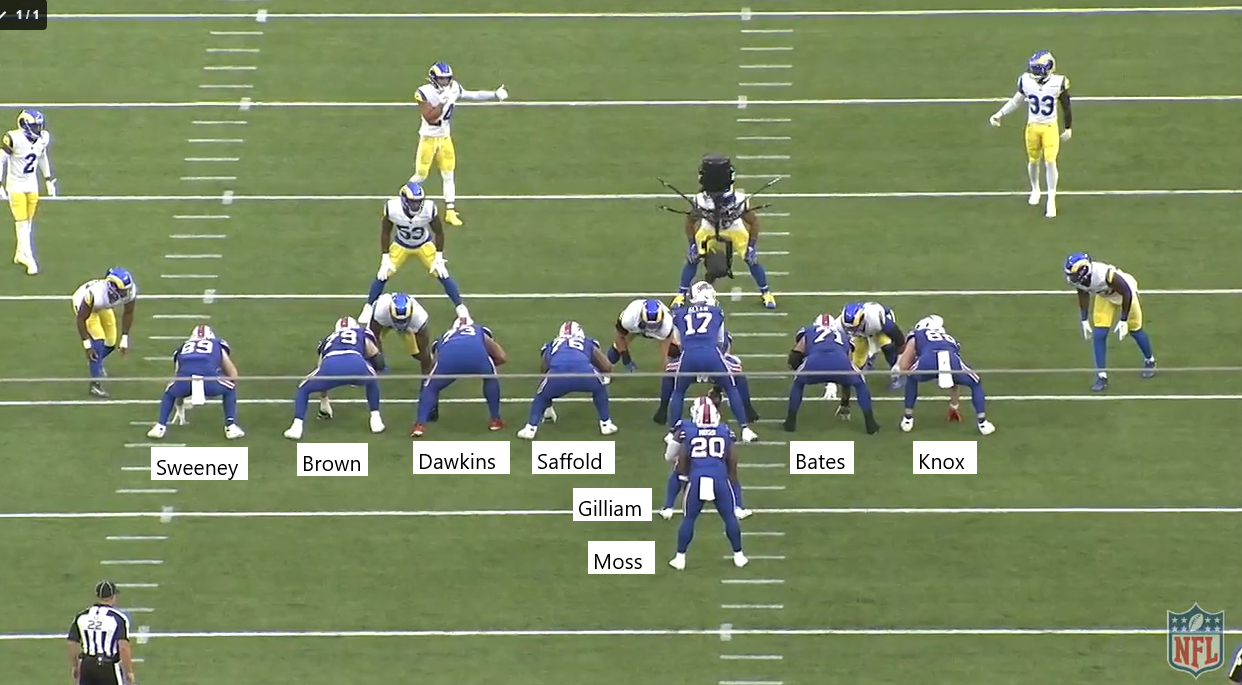 There are two major changes you’ll notice in this play. The first is the personnel group. Buffalo comes out for their first third down of the season in 22 (2 RBs, and 2 TEs) with Reggie Gilliam in front of Zack Moss in I-formation, with Dawson Know and Tommy Sweeney bookending either end of the line. The only receiver in the grouping is Davis – out wide to the right.  It’s already a tendency breaker because the Bills only used 22 nine times in 2021. 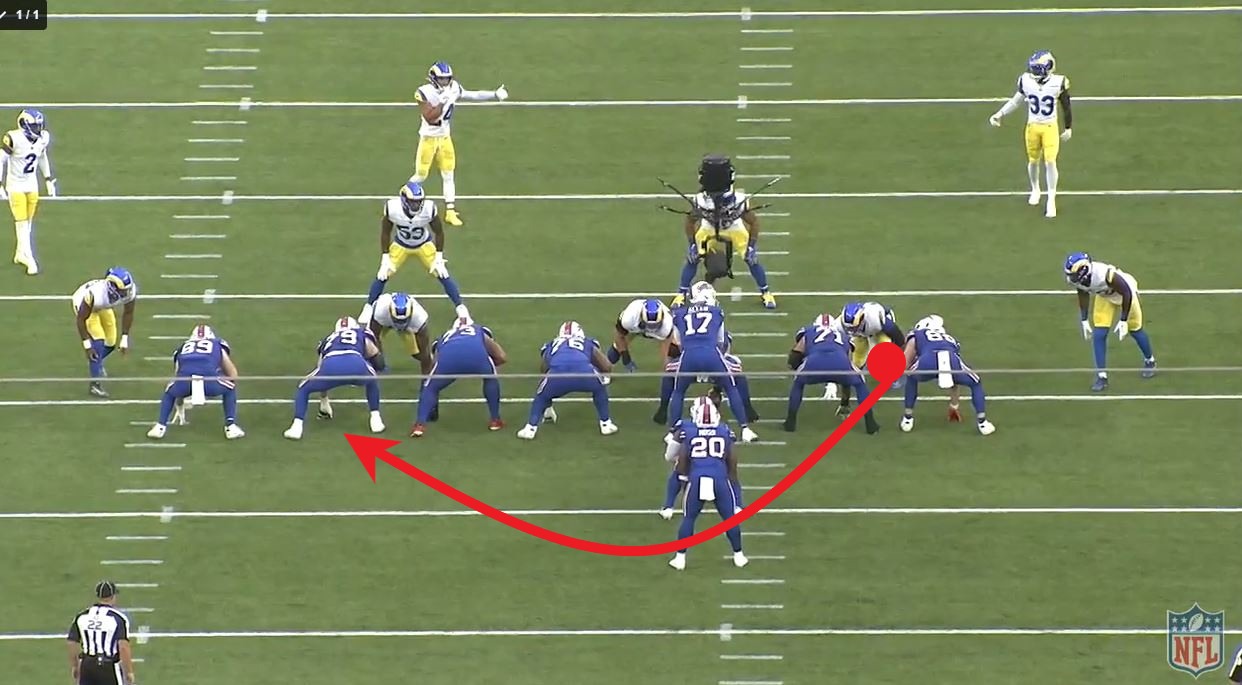 The second thing you’ll quickly notice is the overload formation. To center Mitch Morse’s right is Ryan Bates and then Knox, without a tackle on the right side. Spencer Brown, the starting RT, has shifted to the left, outside of Dion Dawkins. Brown is 6-foot-8, 311-pounds and Dawkins is 6-foot-5, 320-pounds. Together, they create the most imposing mass of human flesh since your aunts surrounded the dessert table at Thanksgiving. It’s 3rd-and-1, and Buffalo is in a heavy personnel group, with a formation designed to generate a power mismatch. Everything says run. 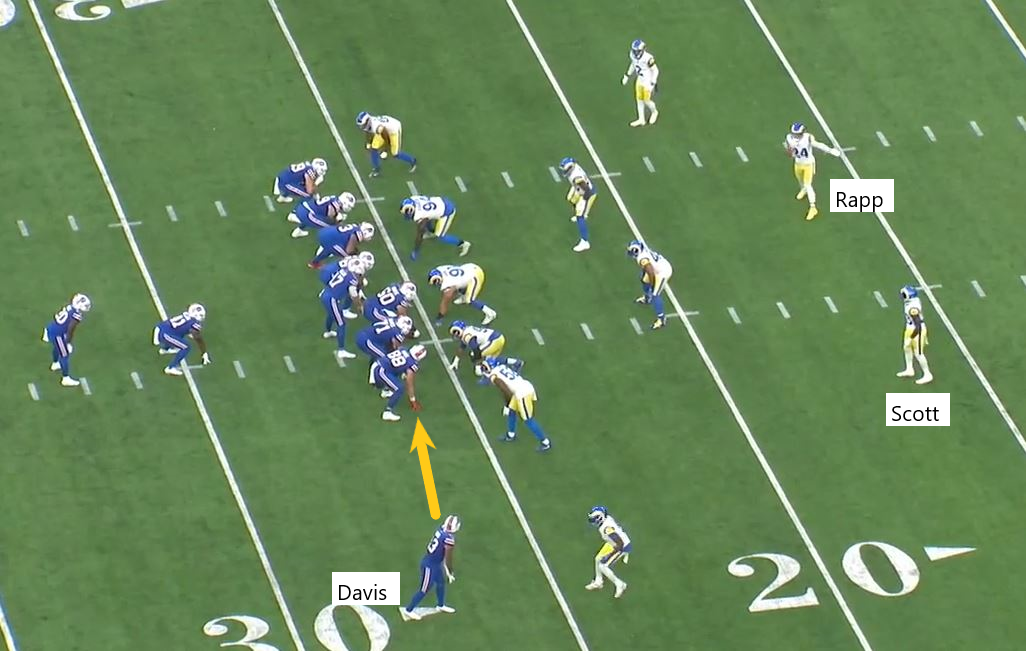 Davis begins the play at the numbers to the boundary side of the formation. Prior to the snap, Allen taps his foot, and Davis begins to motion in close to the line, appearing to prepare to block.

Rams safety Taylor Rapp motions for other safety, Nick Scott, to move up into the box. Los Angeles already had 7 defenders in the box, but the formation says run, so the Rams move another man into the box before the snap.

This is a play design that the Bills have used frequently, just not usually with 22 personnel. Erik Turner has detailed the Bills’ Cobra run. Cobra is a heavy personnel run that Buffalo has used in short-yardage situations. Allen can add a pass tag to the play where a WR slips out after initialing setting up to block. You’ll recognize it when you watch the video below. 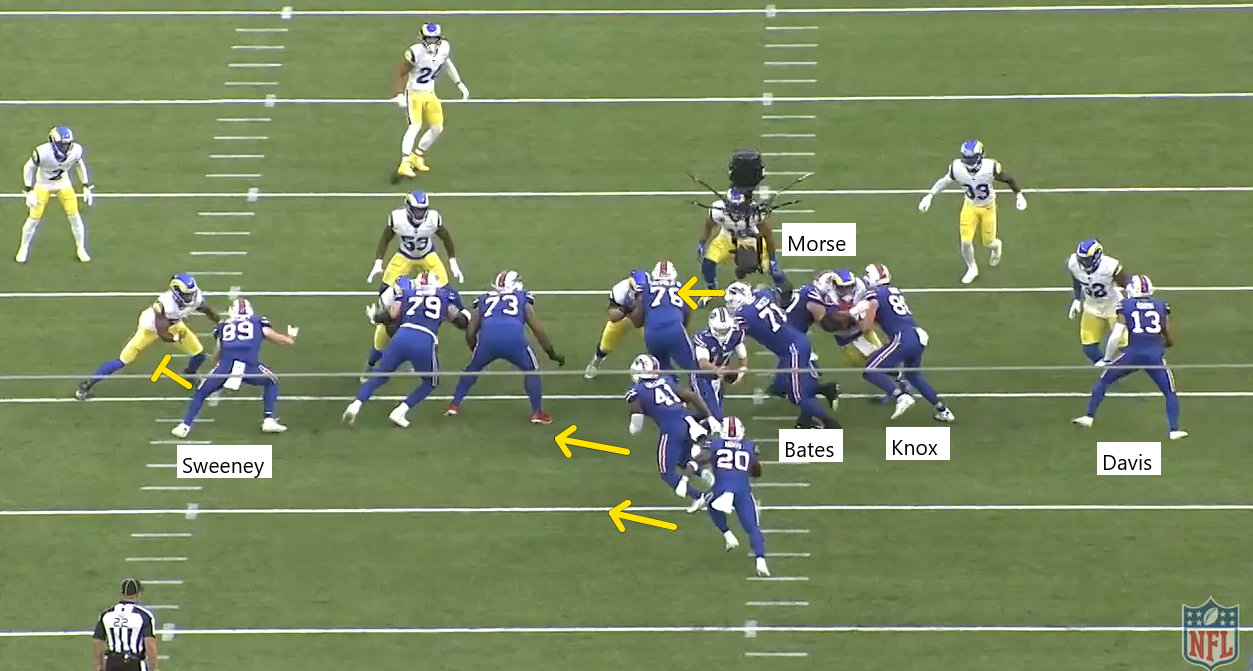 The play action fake and line movement continue to sell the run. Davis has moved in tight and begins to block the Rams’ LB. Knox and Morse have a combo block on a DE, supposedly sealing up the backside pursuit. Bates is pulling to the left to attack the gap between Brown and Sweeney ahead of Gillam and Moss. All of this motion takes the defenders’ eyes towards that “D” gap created by the overload shift with Brown. 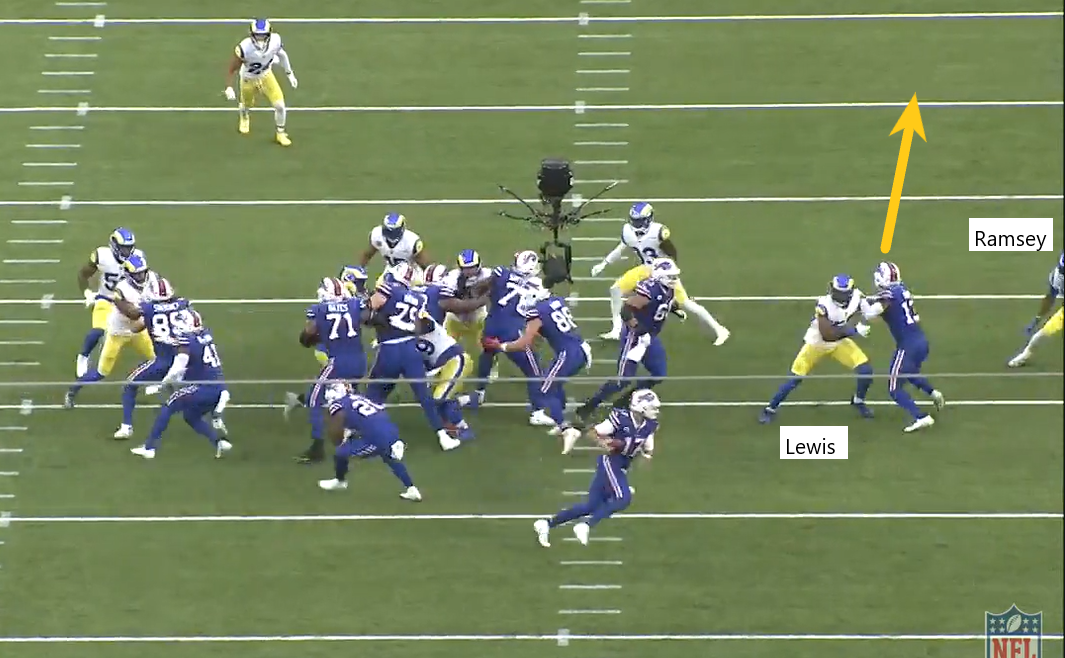 Davis’ timing in shifting from selling the block to releasing into a pattern is perfect. Too early, and he alerts defenders to the fake. Too late, and he hasn’t created space to get open. Without even watching the fake handoff, Davis has begun to release from the block and clear LB Terrell Lewis’ hands with a hook to break upfield before Allen is even in his second step into the rollout. 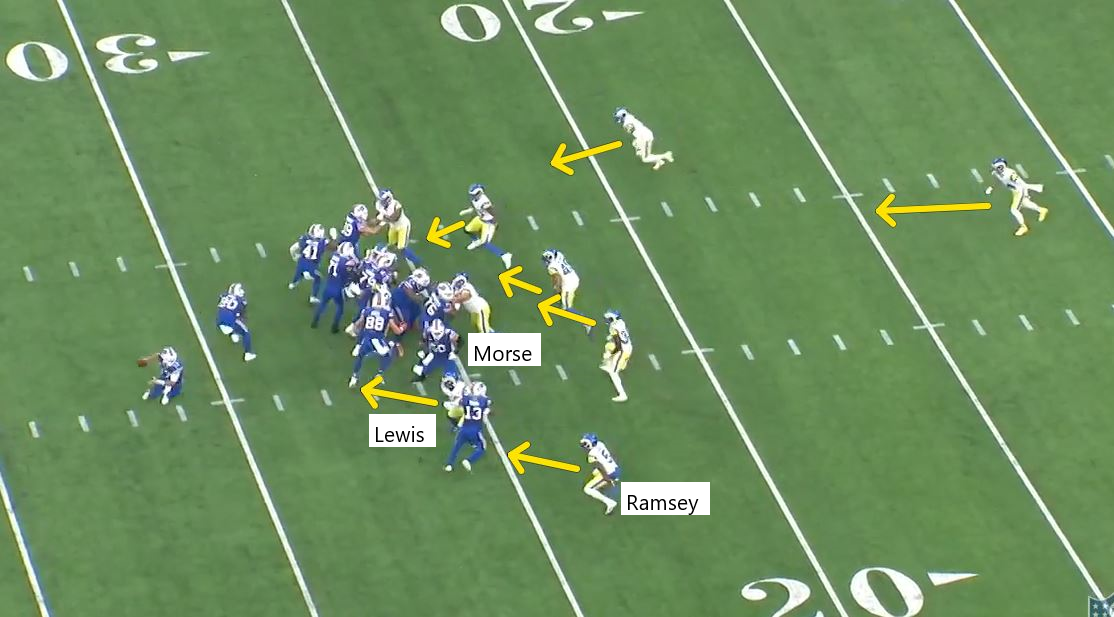 This shot is from the same point in time as the wide angle. Lewis and CB Jalen Ramsey are the only players who have picked up on the fake. Everyone else is aimed at the wide left run. Note that Morse has slid past the DE and is eying up Lewis.

In this instant, Ramsey is caught in a conflict. It appears Lewis is being blocked, making Ramsey the only defender available to pick up Allen if the rollout is a designed QB run. But Ramsey is also responsible for Davis. 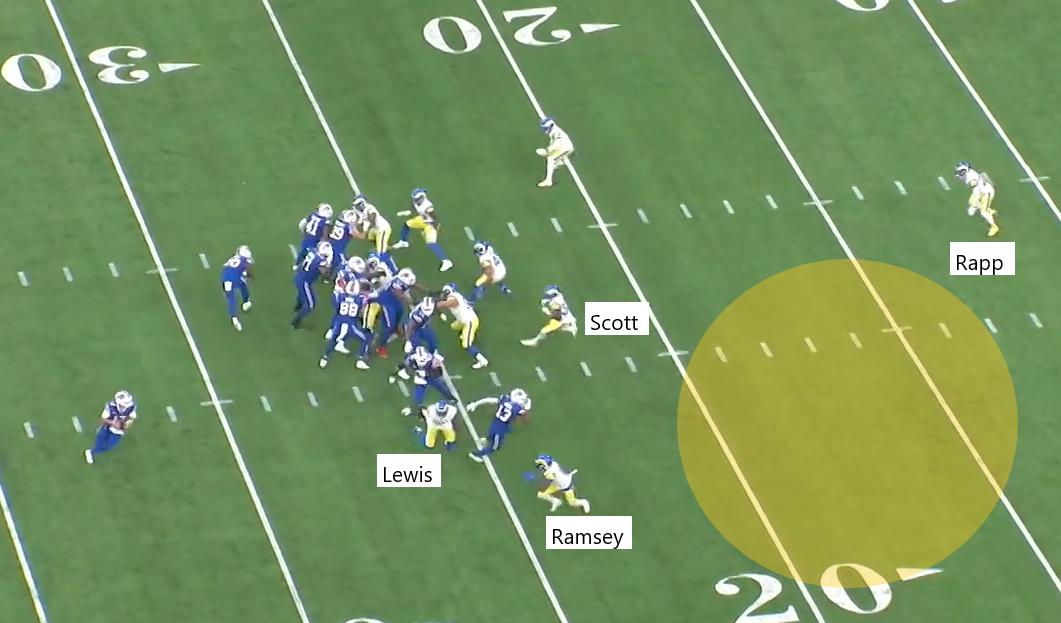 Ramsey chooses to commit to Allen, leaving Davis with more open space than that vacant Kmart in your old hometown mall. All that is left is for Allen to throw a floater over Ramsey and Lewis’ outstretched hands. Unless Scott or Rapp can change gears immediately and catch up to Davis then this is a walk-in TD. They can’t. They didn’t. It was.

The Bills sold the fake as hard as they possibly could through personnel and formation, as well as pre and post-snap movement. The down and distance made sense for a run, so the Rams had to respect the possibility. The play design put a defender in a lose-lose scenario, and the Bills were on their way to an eventual romp with the first touchdown of what is hopefully many, many more in the 2022 season.