Buffalo Bills fans have all been on a crazy emotional roller coaster the last couple of days thanks to a Josh Allen elbow injury, coupled with a brutal loss to the New York Jets. We’re not going to get definite answers to Allen’s elbow issue any time soon, so we might as well enjoy one of the few great plays the Bills’ offense gave us against the Jets. 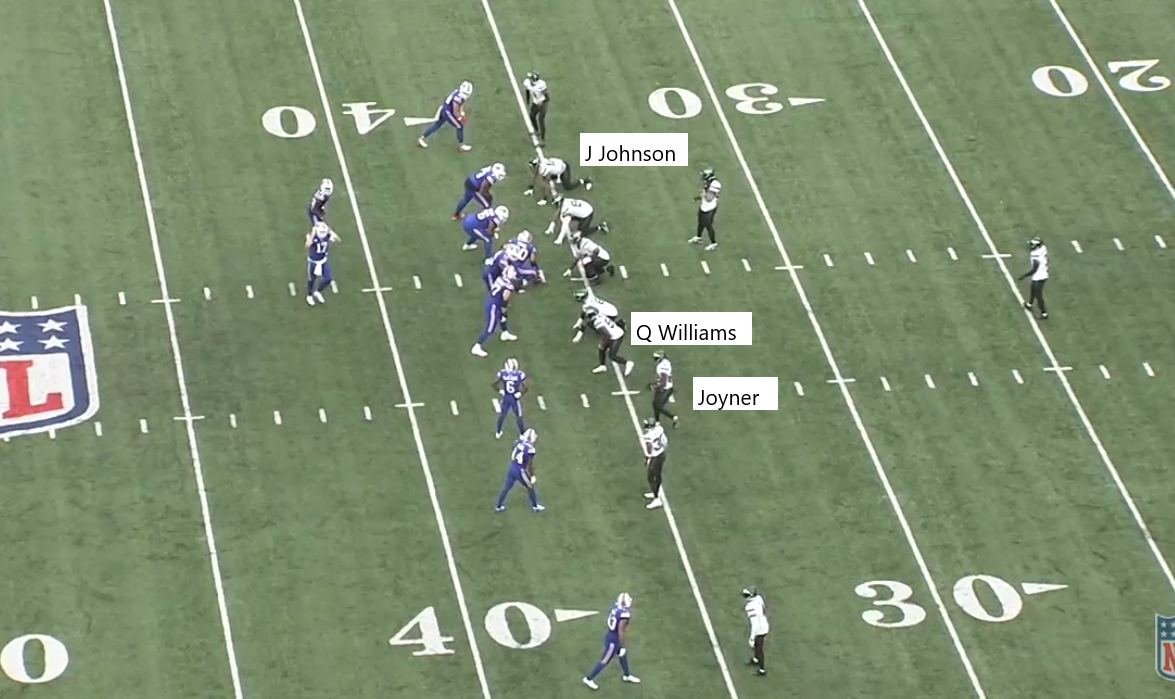 The Bills are up 7-3, and their previous possession ended after 5 plays, including 3 straight incompletions. This drive has seen two runs and six short passes, five of which were completed. Buffalo comes out in 11 personnel with running back Devin Singletary to Allen’s left in shotgun, with tight end Dawson Knox detached to the boundary numbers, and three WRs to the field.

The Jets are first unsettled when Allen begins to call for the snap. The defenders are scrambling around, especially Jermaine Johnson, who gets moved into position by CJ Mosley. The Jets are now showing a 5-man odd front, which is often paired with man coverage. As Johnson finally settles, Quincy Williams moves into a wide 9 alignment and Lamarcus Joyner moves up into press position on Isaiah McKenzie.

When Williams and Joyner move into position, Allen calls the Alert (you can him signaling with his hands to his ears), switching to the built-in alert. Which means that when Allen and the offense approached the line of scrimmage, he was given two plays. Based on the defensive front and coverage look, he checked to the 2nd play – the QB Pin and Pull. 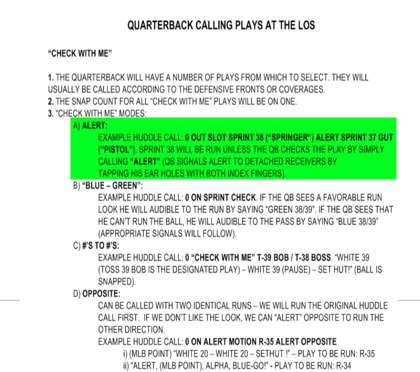 The offense resets with Knox now attached to the left end of the line. 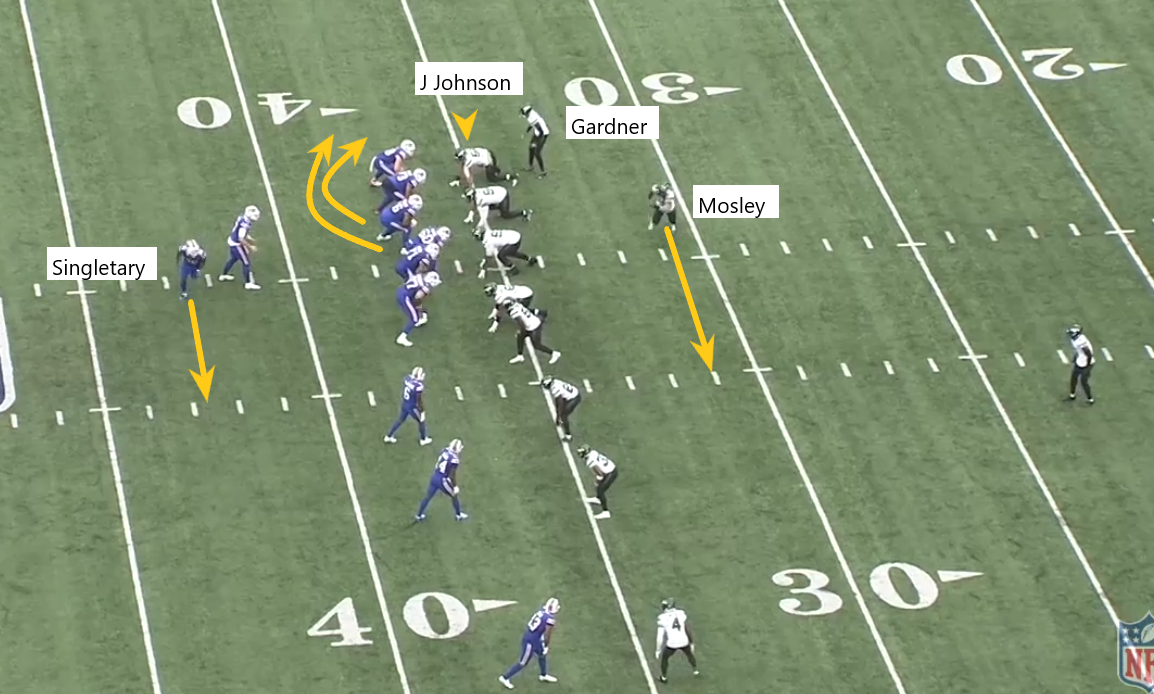 Singletary goes in motion from Allen’s left to the right, and Mosley follows. As we’ll see, this simple piece of motion is critical. It creates a numbers advantage for the Bills on what will be the play side, and it creates leverage for Knox in one of the most important blocks on the play.

Knowing the motion was built into the alert, combined with the likely Man coverage that would pull Mosley away with Singletary, is probably part of why Allen switches the play. The Bills knew what the Jets short yardage defense would be. 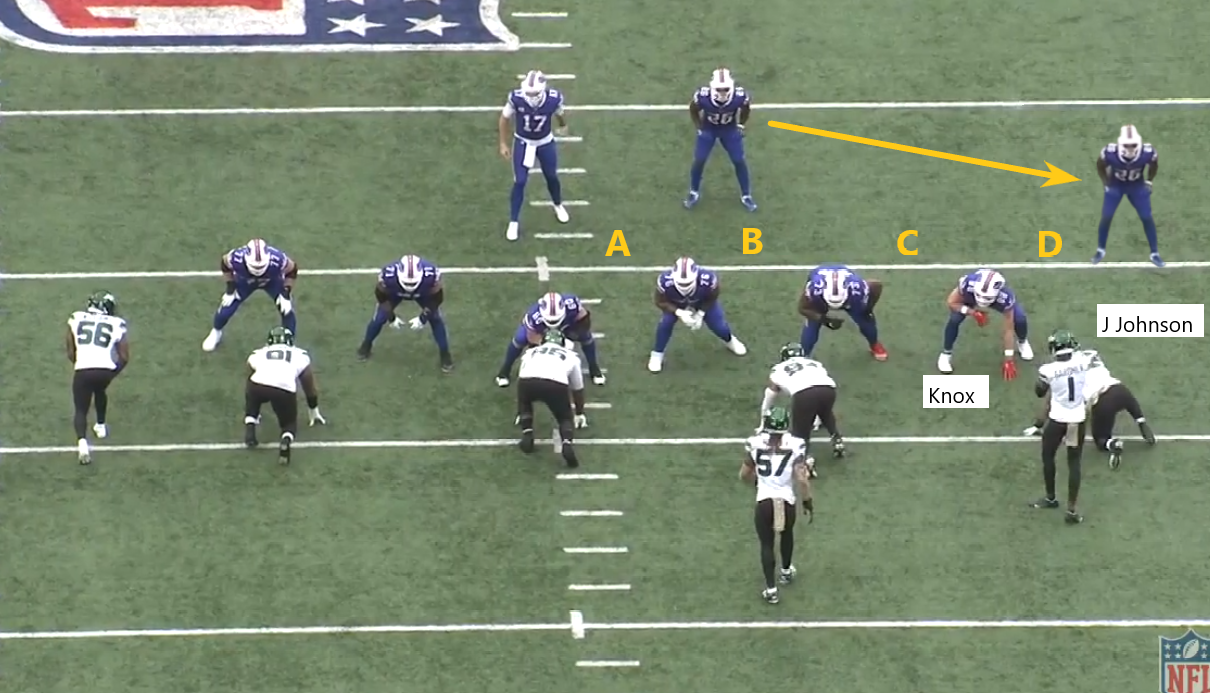 Singletary’s motion essentially takes Mosley out of the play, but it also gives Knox an angle for this block. When the Bills first line up, Johnson has to respect Allen’s ability to run and the possibility that Singletary might be a blocker for a designed QB rush. If Motor does become a blocker, he creates a D gap that Johnson would need to fill, so he lines up on Knox’s outside shoulder. When Singletary motions across, that potential D gap no longer exists, and Johnson slides helmet-to-helmet with Knox (below). 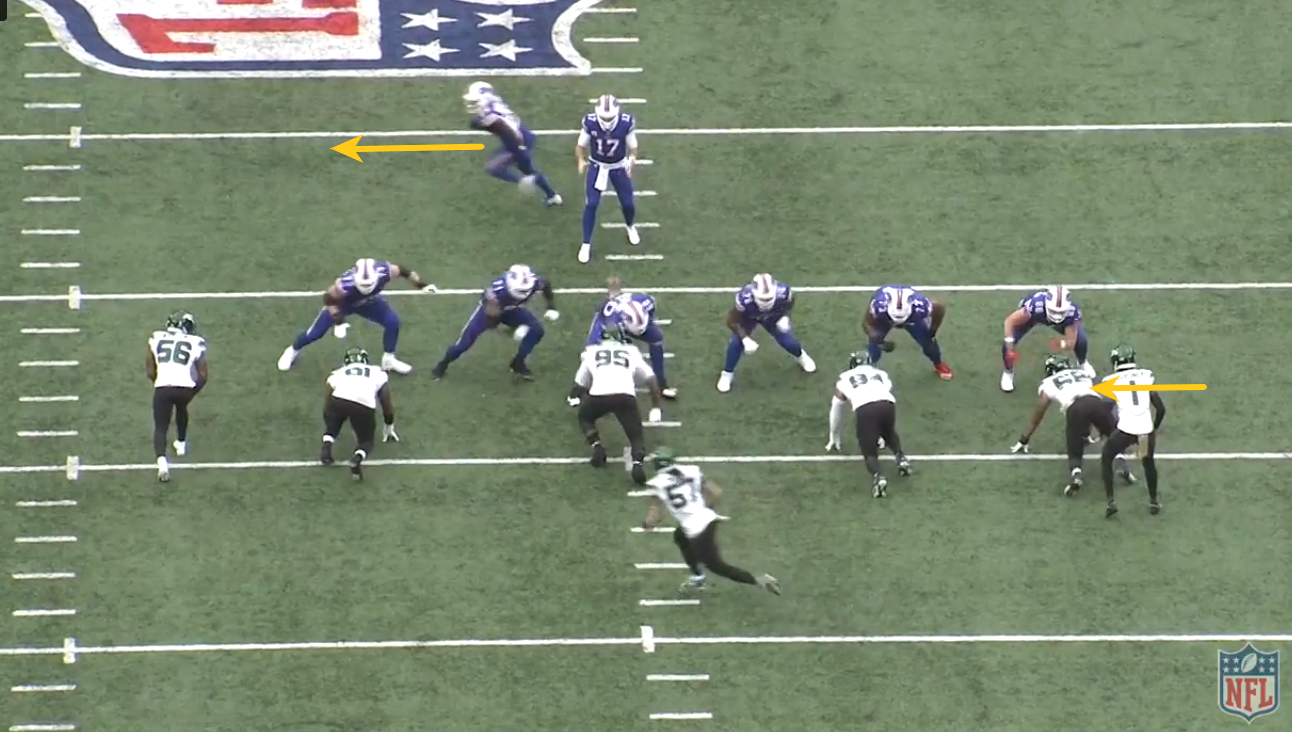 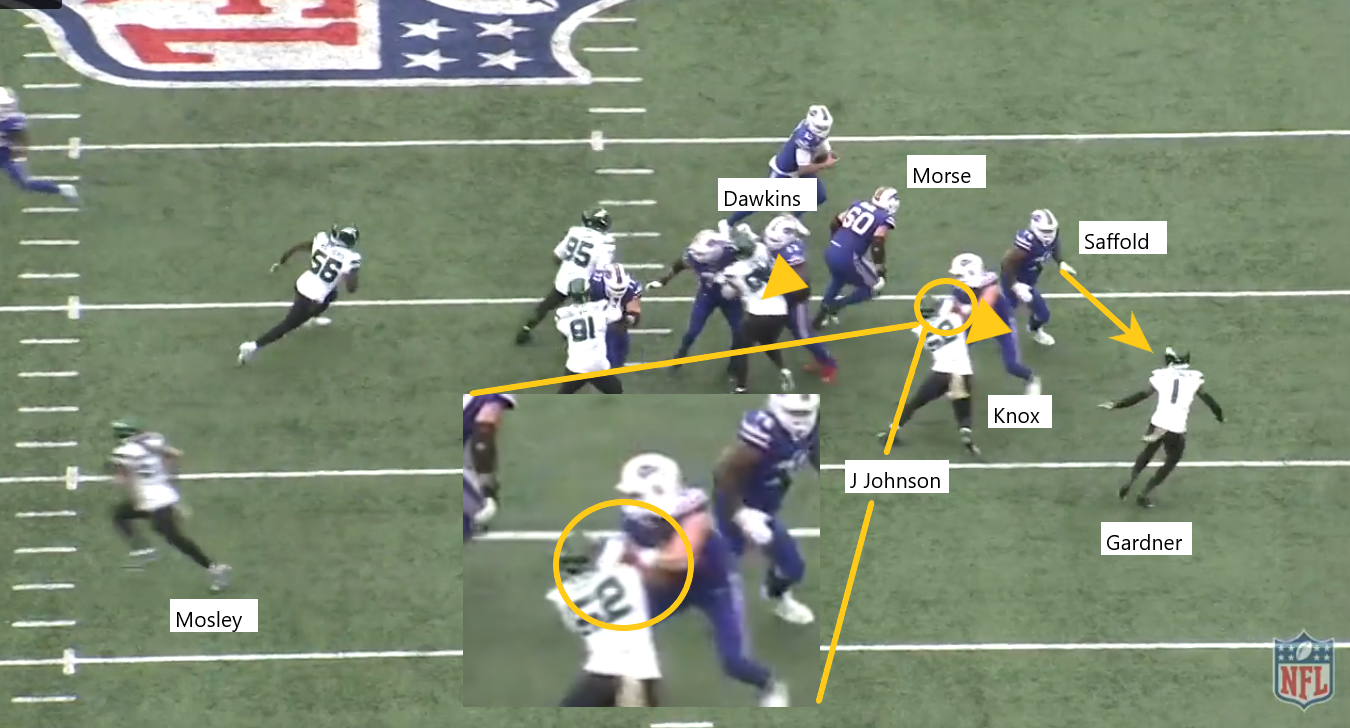 Center Mitch Morse and left guard Rodger Saffold pull around left tackle Dion Dawkins and Knox, each of whom have down-block responsibilities (Pin blocks). That slight shift by Johnson makes Knox’s block just that much easier. Instead of having to maneuver an extra step to get outside of him, Knox can immediately engage and begin to force him toward the inside with leverage on Johnson’s outside shoulder. Don’t forget to note that Motor’s motion has Mosley running in entirely the wrong direction.

Also, I’d love to know what is going through Saffold’s head as he lines up Gardner like a lion staring down a trapped gazelle. 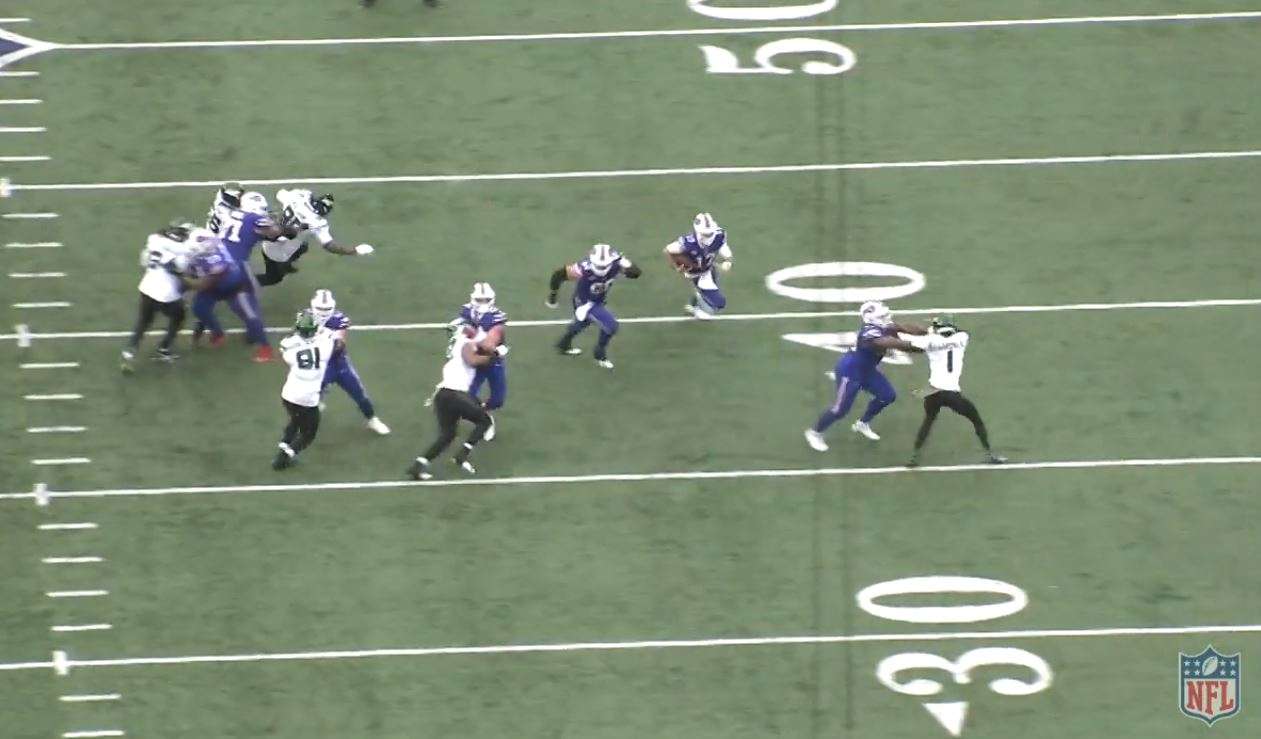 The Jets have cleared the runway. 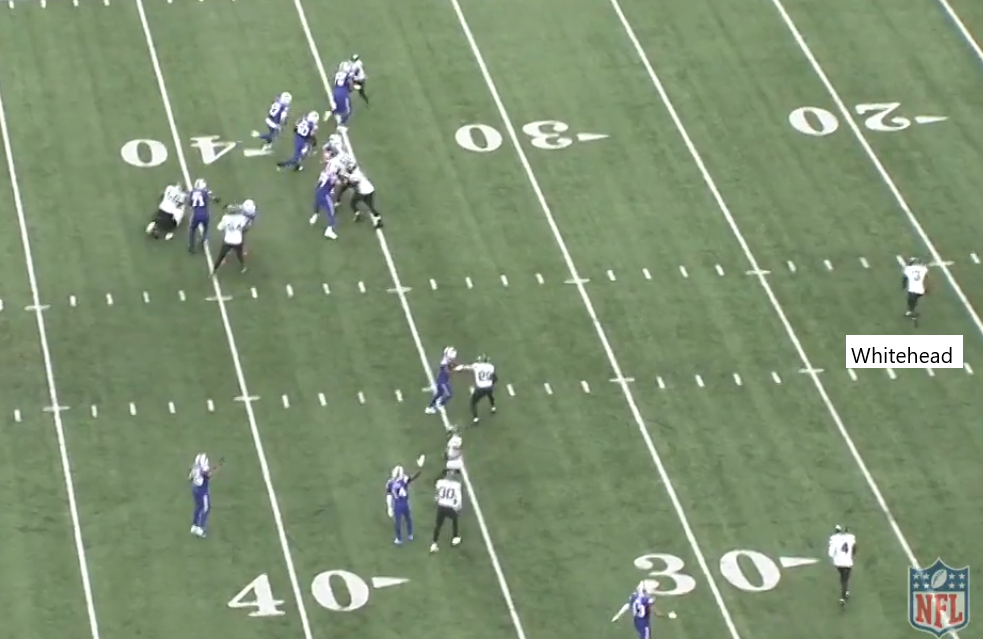 At this point, Whitehead is the only player who can stop this from being a touchdown.

Designed run for @JoshAllenQB. He’s gone for a 36-yard TD! 🙌

It is seeing the little things that create big things that make getting into the film addicting. If Singletary’s motion is not part of this play, do Mosley and Johnson stuff Allen?  If Williams and Joyner don’t present pressure and man coverage, does Allen change the play? Football is a ridiculously complicated game at the NFL level, and the nuances and intricacies make it even greater when you dig into them – even if we let it drive us crazy.