How the Bills made Aaron Rodgers, Packers one dimensional in Week 8 win

The Buffalo Bills beat the Green Bay Packers by 10 points, and many fans were still disappointed because the Bills’ offense struggled with unforced errors and the Packers ran the ball seemingly at will against the Bills’ D. Green Bay averaged 6.7 ypc in Week 8 – well above their season average of 4.9 – on their way to 208 rush yards on the day.

The Packers had 7 drives that started when trailing by two or more scores. Removing the one-play drive where Milano intercepted Aaron Rodgers, Green Bay had six drives in which conventional wisdom would say to pass more often.

The Fightin’ LaFleurs ran 26 times in those 6 drives, which included 52 plays, subtracting penalties and punts. In 2022, Green Bay has run 41% of the time, but Sunday, the Packers were choosing runs at a 50% rate with a HOF level QB and a game script that indicated increased passing.

Why? The Bills encouraged the Pack to run with the effectiveness of their coverage and pass rush.

Let’s look at two plays in sequence to demonstrate. 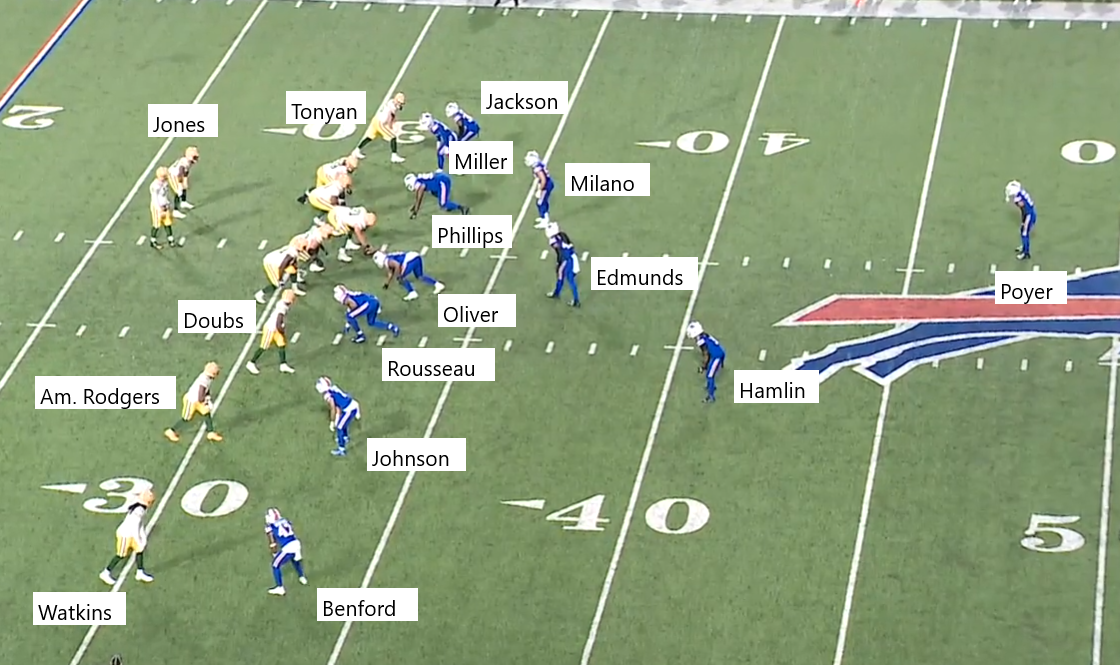 The Packers come to the line in 11 personnel with Aaron Rodgers in shotgun and RB Aaron Jones to his left. Tonyan is attached as the TE, with Sammy Watkins outside the numbers, Amari Rodgers inside, and Romeo Doubs in the slot. The Bills match with their typical nickel, with Von Miller and Greg Rousseau in wide 9 alignments, and Oliver and Phillips are at 4i, on each tackles’ inside shoulder. Hamlin is shallow but not quite “in the box” with Poyer deep. 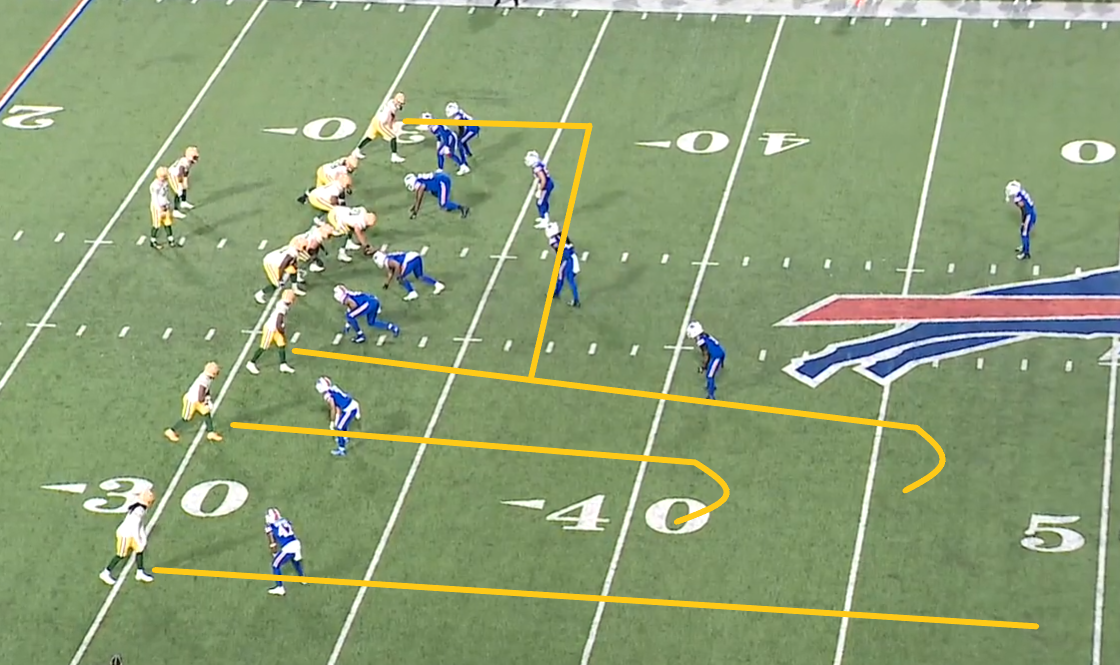 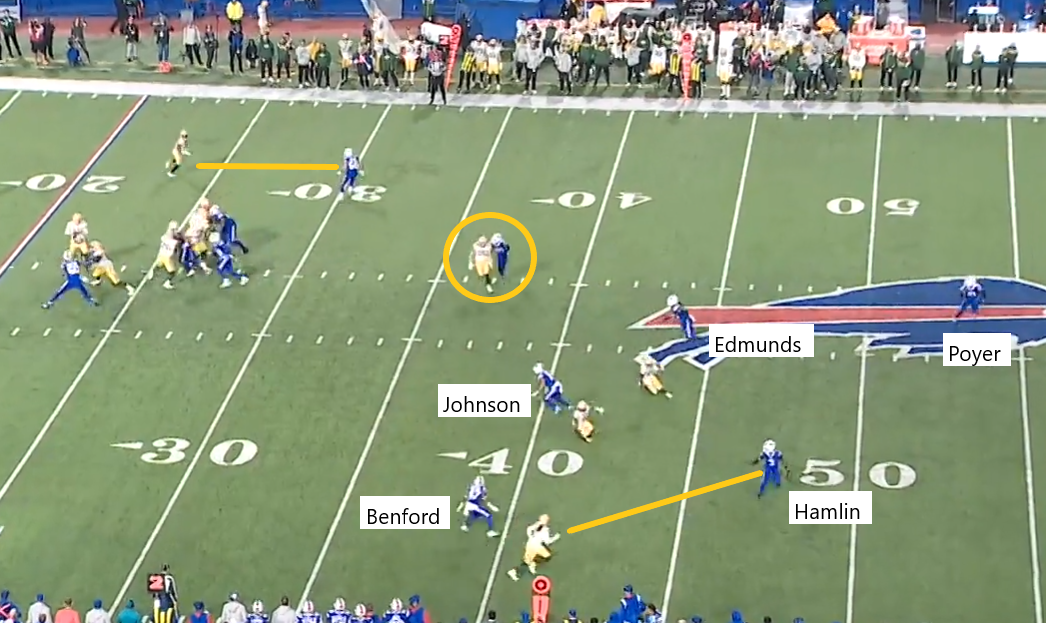 The Bills are running their Overload Zone Coverage. This is a combination coverage mixing elements of man and zone. Essentially, Milano and Jackson are left in man against Jones and Tonyan, while Benford, Johnson, Edmunds, Hamlin, and Poyer flood the field side. Benford releases Watkins to Hamlin and picks up the curl while Johnson is right between the numbers and hash, and Edmunds is on the field side hash.

From Aaron Rodgers’ perspective, the WRs are either covered or the throwing lanes are clogged, as Jackson has good coverage on Tonyan in the middle of the field. Jones could be a positive check down one-on-one with Milano if Rodgers has enough time to work through that progression.

Head to the 32:30 mark for Erik Turner’s description of the Bills’ Overload Zone Coverage 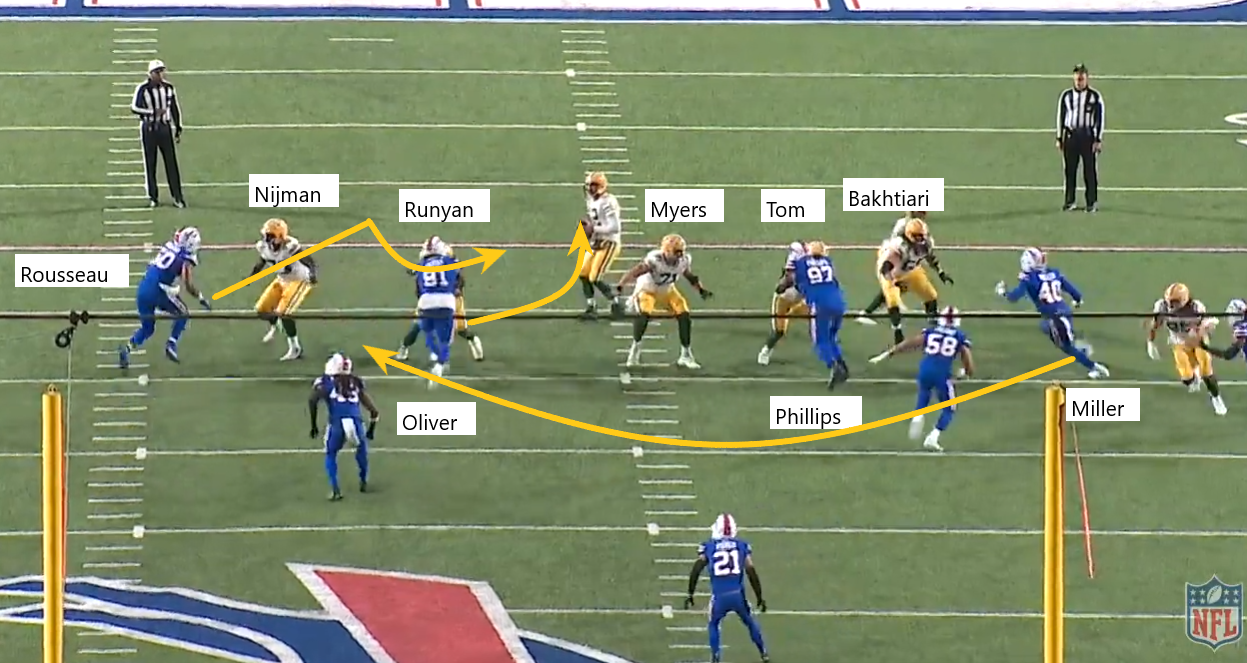 Oliver beats Runyan to the inside with a swipe and disrupts Rodgers. Rousseau and Nijman exchange what should have been off-setting illegal hands to the face, and Groot swims over him right after Rodgers has begun to move from his spot. Phillips occupies Tom and Bakhtiari because Miller is looping almost the entire offensive line, going from C gap to the opposite B gap. Myers does a nice job chipping Phillips, picking up the long stunt, and then nullifying Miller by pushing him wide, but by that point, Groot has Rodgers for the sack.

Before Oliver upsets his progression, Rodgers gave a good look to the WRs bottled up by the overload zone and checked on Tonyan blanketed by Jackson. He never had a chance to get to see Jones. Here the coverage scheme and the rush combine to shut down the Packers’ pass game. 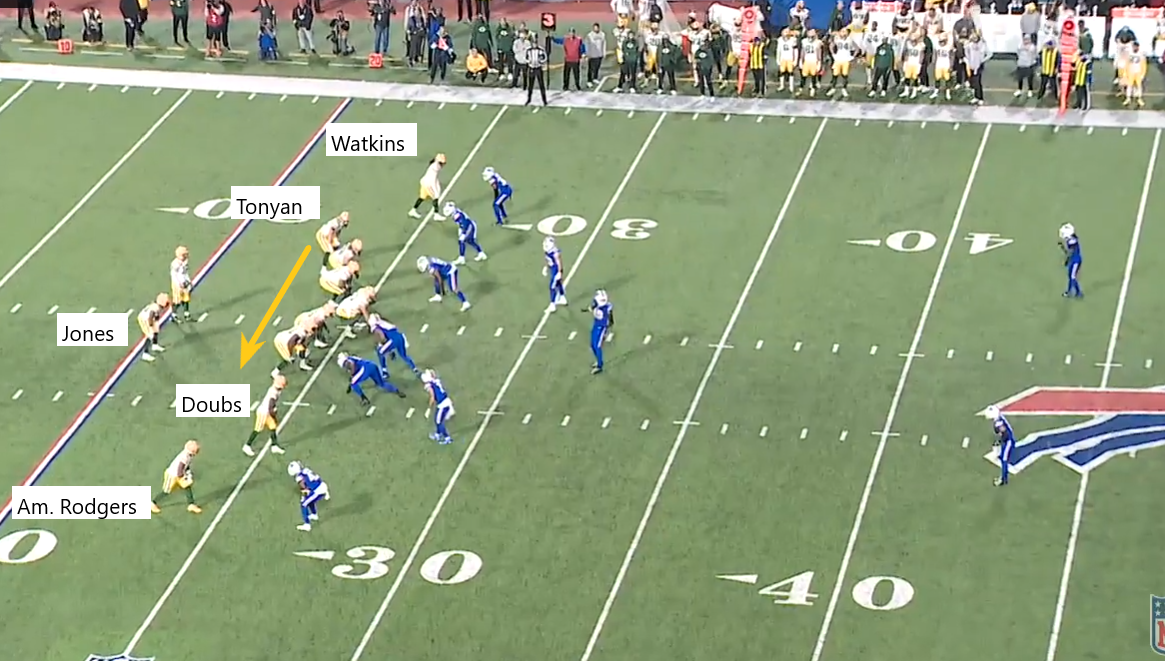 The Packers are in the same 11 personnel, again with Tonyan initially attached to the boundary side, where Watkins is on the numbers. Amari Rodgers is again just inside the number with Doubs in the slot. In this play, Jones is to the right of Aaron Rodgers. Tonyan motions to attach on the field side. Most of what’s interesting in this play happens prior to the snap. 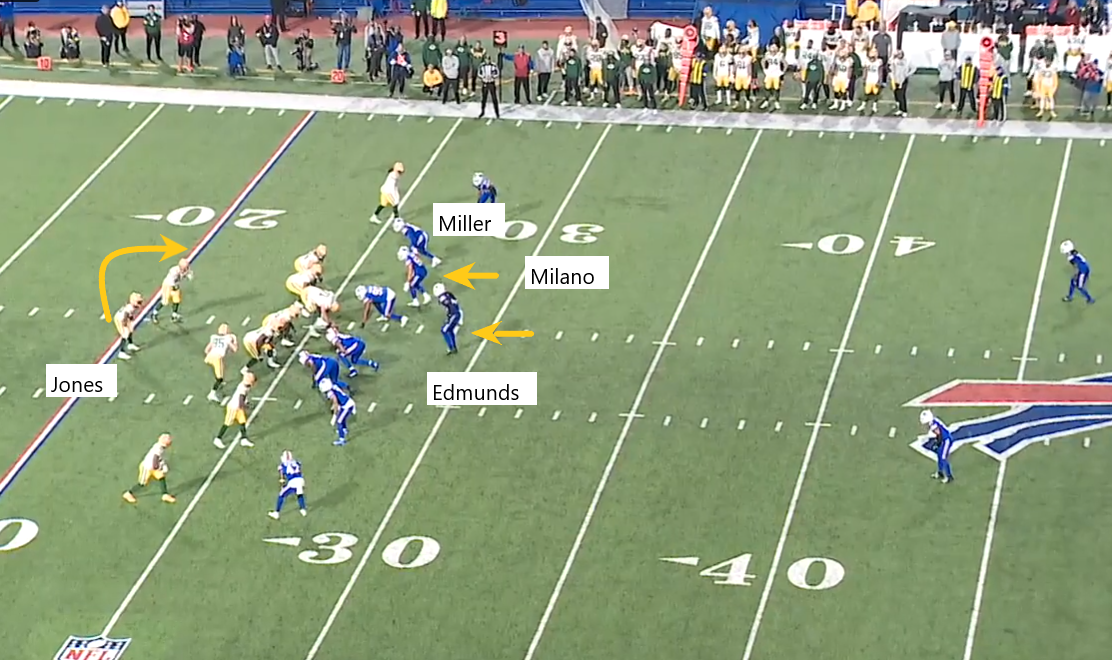 Milano and Edmunds take a few steps up to mug the A gaps. As soon as that happens, Rodgers signals for the switch by putting his hands up to his helmet and calling for the change. All the receivers check back with Rodgers and Jones switches sides. With the Bills presenting pressure, Rodgers is encouraged to adjust the protection or pivot to the predetermined play option. 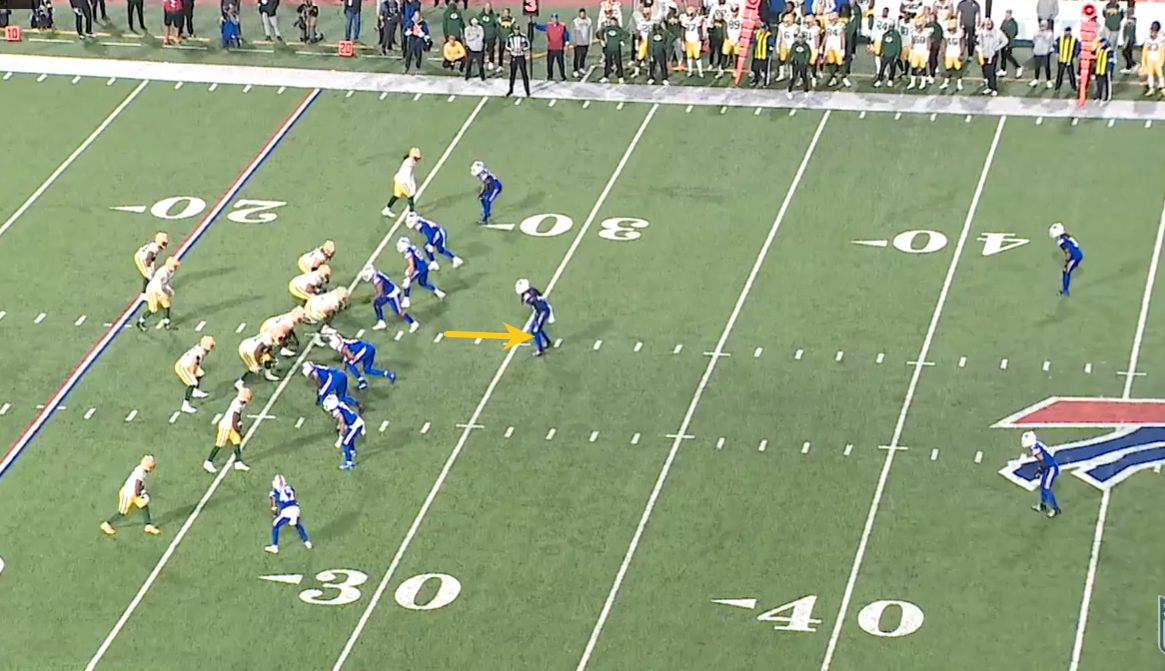 Rodgers and the Packers don’t even fully finish all the histrionics of hand signals and checks and motions before Edmunds take two steps back to his original spot, which is the football equivalent of Nelson…

By this point in the play clock, it’s too late for Rodgers to respond to the indication that at least Edmunds is not blitzing. 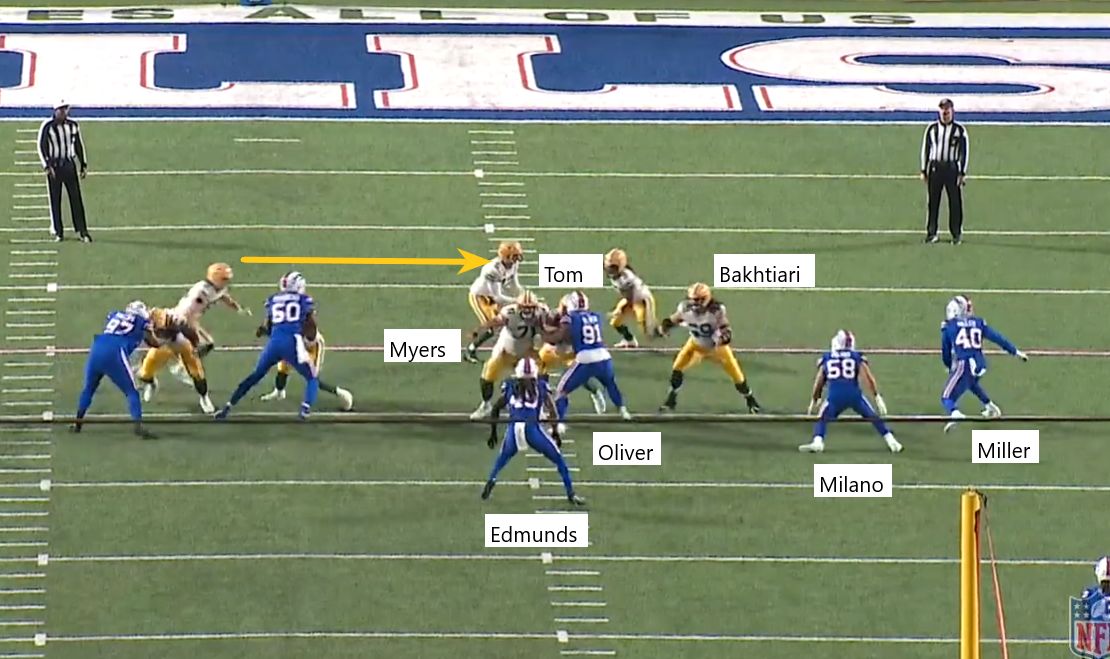 Tonyan begins to come back across the formation to kick out Miller. Tom engages with Oliver with help from Myers, who is also eyeing Edmunds. Bakhtiari first looks to down block but then sets on Milano, who hasn’t blitzed either but dropped back a step before hesitating to watch if the handoff is real or play action.

The Bills had Rousseau at DT with Phillips at DE to start the play. Rousseau kept his eyes in the backfield and moves at Jones, but Runyan does just enough to keep Groot out of the play. Myers has moved on to Edmunds. Tonyan is just about to get Miller kicked out to create a lane behind the left side of the Packers’ line. Hamlin is starting to come up in run support. 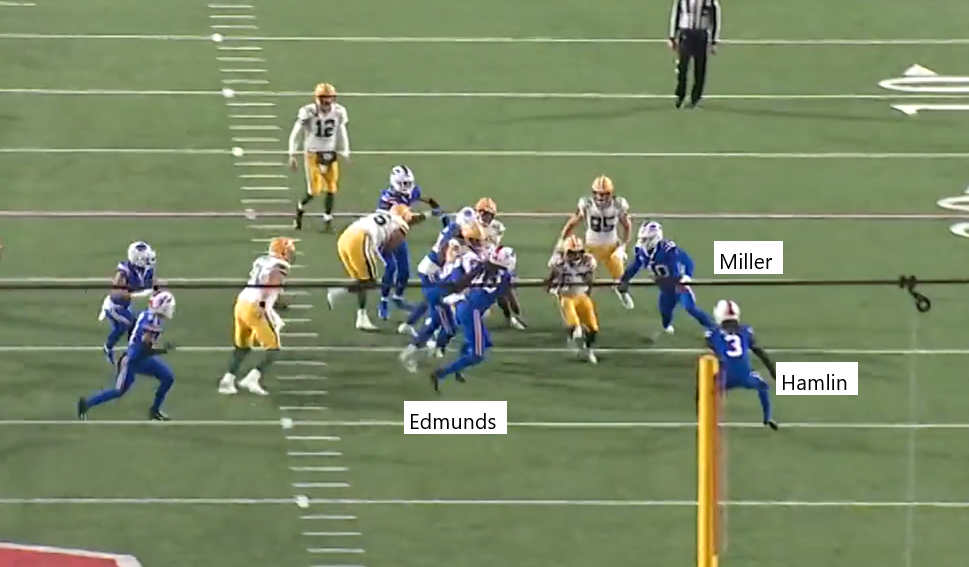 Despite the internet hordes telling us it has never happened, Edmunds disengages from Myers block, and MIller gets off Tonyan. Hamlin is just waiting to fire his gun, but Jones finishes with a strong, well-blocked 9-yard run. On 3 &16. Congratulations on your punt.

The Bills gave up a lot of yards to the Packers running game. Green Bay had their biggest rushing yards day on the season. They had 203 rush yards against the Bears and 199 versus the Patriots and won both of those games. Neither Chicago nor New England has an offense anywhere in the same stratosphere as the Bills. The Packers were tied or held a lead against Chicago for 56 minutes of game time, and the Patriots’ game was a close fought back and forth affair.

The Bills chose to limit Rodgers’ as a passer, and the Cheeseheads had a big day on the ground. Switching to a run on 3 & 16 when down by 14 points has to register on the surrender index though, especially when you have a surefire Hall of Fame QB. That’s the part that matters. Give up all the yards, only points go on the scoreboard.

“You don’t want to give up all those yards (rushing), but at the end of the day it’s about points.”