The 2022 Buffalo Bills’ season is as eagerly anticipated as any in the last 30 years. The Bills are preseason darlings, Las Vegas has them as Super Bowl favorites, and Bills Mafia doesn’t know what to do with their hands. However, the games still have to be played, and as we know – luck and chance are fickle and have never been particularly kind to our Buffalo teams. With those caveats in place, one of the most unwelcome obstacles the Bills might face is injuries.

Losing Tre White to an ACL tear left the door open for Bills fans to imagine how the Divisional Round playoff game versus Kansas City might have gone differently. None of us want any injuries to snakebite the team this year, but not all injuries have the same impact because not every player is equally valuable to the team’s success.

Which players would be the most devastating to lose? In a positive spin, which players are the most indispensable to the team for the 2022 NFL season? The Air Raid boys discussed it at the 58′ mark here.

First, we need to define indispensable. For our purposes, indispensable is value times rarity. How much is this player worth to the team and how readily available is an equivalently valued player?

Rarity is pretty easily defined, but we also need to set a baseline for how to evaluate value to the team. Value is nebulous and often in the eye of the beholder, but this fool has chosen this particular errand, and here we are with a need to move forward. So, this article will use value as a sum of the player’s physical traits, skill level, and positional importance. As a result, the formula for their indispensability score, or iScore, looks like this:

For physical traits, Relative Athletic Score (RAS) does an excellent job of putting a player in the context of his peers. If you’re unfamiliar with RAS, it’s a formula using the results from players’ athletic testing – the forty-yard dash, bench press, three-cone, etc – that compares them to test results of other players at their position. RAS, developed by Kent Lee Platte, runs on a scale of 1 – 10 with 10 being the highest.

For skill level, PFF grades are problematic because they are too often inexplicable, but an easily comparable performance statistic would be ideal, so we’ll include Overall grades here, along with two or three other statistics for verification. All stats are from PFF unless otherwise noted.

Positional Importance will be decided by how NFL teams spend their money. The positions where teams allocate their cap indicate how important they think that position is compared to others. The following chart includes the average salaries by position, the average of the top 10 cap hits at the position, and an importance score, which is simply a reverse scoring of the 17 positions. The ranks were set by the average of the top 10 cap hits. The position groups were determined by Spotrac’s listing. 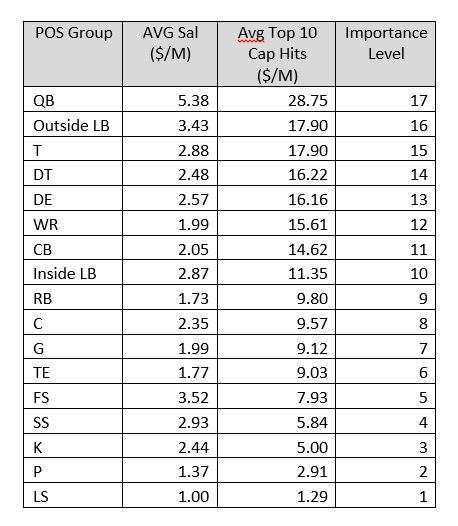 Morse’s athleticism, footwork, and movement skills are terribly underrated. The upgrade he brought to the position after the Bills were forced to scramble after Eric Woods’ injury was a key step in solidifying the offensive line.

You think Poyer was good last year? He was so much better than that. We’ll let this graphic from Aaron Quinn (@AaronQuinn716) do the talking. 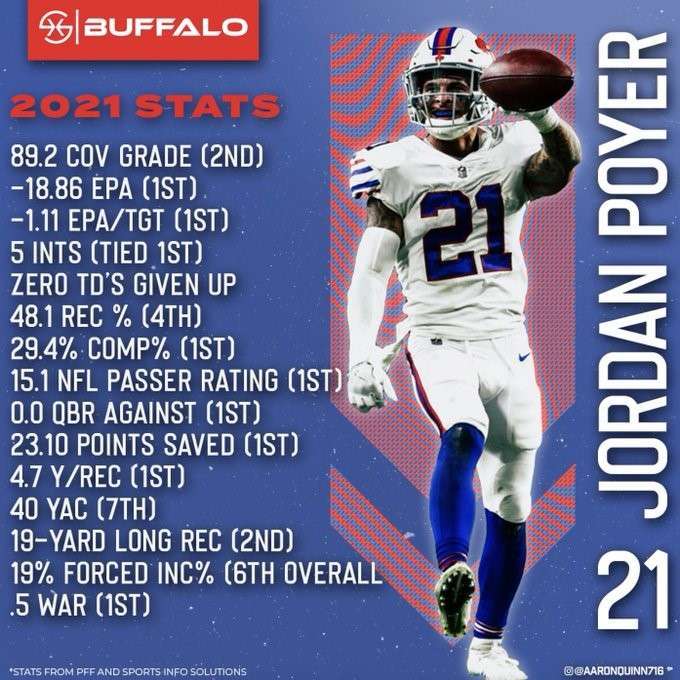 Johnson’s overall game has improved each year, and he is now largely regarded as one of the best slot cornerbacks in the league. He is labeled as a nickel CB, but nickel is the defense the Bills use most, and Johnson played 82.9% of the Bills’ D snaps in 2021. He is a starter, not a sub-package player, and he would be seriously hard to replace.

A lot of Bills Mafia will get excited if Edmunds leaves in free agency after this season. Then they’ll learn how difficult his full game is to replace.

Great stick on Henry by Edmunds to close the half#BUFvsTEN@GregTompsett @Cover1 pic.twitter.com/p3yfOfX2Bf

Hyde and Poyer should likely be higher on this list because McDermott, Frazier, and the Bills value safety more than most other teams, which means their position-ranked score should be higher. Poyer (8th) and Hyde (18th) are in the top 20 of cap costs for safeties because the Bills know how much they are worth to the defense. Only two other teams pay two safeties top 20 money – the Bengals and the Seahawks.

White cannot get healthy too fast. His statistics prove he is one of the best CBs in the league, but beyond what the stats show, his best attributes are his intelligence and his footwork, both of which you can see here.

White running the route for the receiver pic.twitter.com/Y2WyvLnPEe

Oliver was the only DT to finish top 10 in both Run-Stop Win Rate and Pass Rush Win Rate (ESPN). Oliver’s blend of speed, quickness, and power are rare, and his production started to meet his potential last season.

There are numbers to throw at you- but just watch this. Go try and find that somewhere else.

Miller has averaged 77 pressures per season for 10 years, and his Pass Rush Productivity (13.7) was sixth in the league last year for players with 50% of pass rush snaps, ahead of players like TJ Watt and Joey Bosa. PRP is the amount of pressure accumulated per pass-rushing snap, like pass-blocking efficiency. If the numbers don’t convince you, here he is the Superbowl LVI.

Highest @PFF pass-rush grade in a Super Bowl since 2006

One of the best to ever do it. pic.twitter.com/1EGrJlkxEZ

Of course. More than enough words have been written about Allen’s performance level the last two seasons. Consider these two notes though: Allen ran for 897 yards, 499 of which came after contact, and he had the lowest percentage of pressures turned into sacks (10.6%) while facing the second most pressures in the league (264). Check out Uber Hansen’s piece on Josh Allen. His collection of skills is absurd. The rarity score is hyperbolic, but enjoy watching Josh Allen play the footballs because we will not see his likes again.

There are other players who might deserve to be on this list. Arguments could be made for Dion Dawkins for positional importance or Spencer Brown and Greg Rousseau for their rare physical traits. The players on this list have a combination of traits, skills, and importance that make them all crucial to the Bills’ success. Any injury strains a team, but to lose any of these 10 players for a significant amount of time would hinder the Bills’ ability to take advantage of the opportunity the 2022 season brings.

The Bills Athletic Trainer, Medical Staff, and Performance Science Staff are names to know and appreciate.