We have entered the final third of the 2022 NFL season, and I seriously cannot believe how fast it has gone by. Even though we are two-thirds of the way in, Thursday night is the Bills’ first meeting with the divisional rival New England Patriots. The biggest news heading into this matchup is the absence of Von Miller, who injured his knee in Buffalo’s Thanksgiving Day clash with the Detroit Lions. It potentially changes how the Bills attack defensively – after Miller went out against the Lions, the Bills began to blitz significantly more, when they have spent large portions of this season having one of the lowest blitz rates.

Three Props and a Cloud of Dust didn’t get injured against Detroit. Another 2-1 week rolling on through Motor City like a fast Thanksgiving Parade tossing out free money. I mixed enough metaphors there. Josh Allen ran all over the toothless Lions, and Stefon Diggs made us sweat it out but caught eight passes to hit the over. Gabe Davis’ longest reception only being at 16 yds was disappointing considering the weaknesses of the Lion defensive backfield, but overall, another good week. Let’s get that analysis money.

BetUS has live wagering on all major games, the best betting variety in the business, an easy deposit & withdrawal process & the Fastest Payouts in the Industry.

It’s the Patriots and Bill Belichick. The New England D has been really good this year (all stats from SIS unless otherwise noted).

And the pass D has been even better.

They will be minus Christian Barmore, who is a key piece on their interior DL (more on that below). Despite the goofiness of a tri-cornered hat, this defense can play whether Bills Mafia wants to admit it or not.

Where the Pats have struggled is on offense, which was as predictable as the sunrise when Belichick put defensive coordinator Matt Patricia as their de facto offensive coordinator (let’s collectively refuse to acknowledge the stupidity that is Belichick’s insistence on not officially naming an OC). Unless the Bills can get out of this funk where every play feels like it takes a herculean effort, the Patriots will stay close in a lower-scoring affair, like the Jets’ game.

One potential easy button that the Bills’ offense might exploit is underneath passing. The Pats’ D is not quite as strong there. On passes going less than 10 air yards, the Patriots allow

And if Ken Dorsey and Josh Allen use more play action out of their standard 11 personnel, the Pats’ D shows a few more cracks

BUF vs NE might be the Nyheim Hines breakout everybody has been hoping and calling for.  Bills fans would also enjoy a leap in the continued development of James Cook, who has seen his targets/game double since the bye (1.2 to 2.4, PFF) and his total opportunities/gm (rush attempts + targets) close to double (4.3 to 7.8, PFF). You won’t find a Hines or Cook prop below because the RB committee usage is still unclear, but don’t be surprised if one of those quick backs ended up being a star Thursday night.

For a full breakdown, check out UberHansen’s Game Matchups Preview. 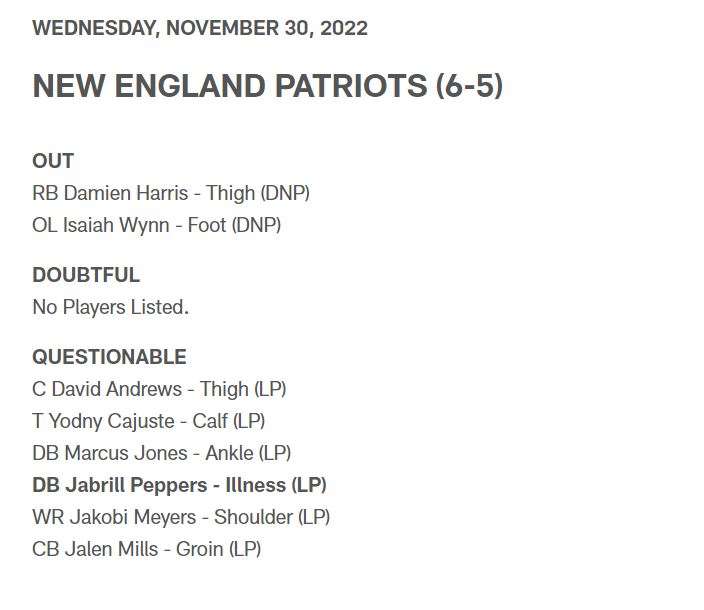 Two key factors in this one. Stevenson is a certified beast, and the Bills give up broken and missed tackles. Stevenson has the sixth-highest YAC/Att for RBs with more than 50 carries. The Bills’ Broken Tackle + Missed Tackle Rate is next to worst in the NFL at 14.8% (only HOU is barely worse at 14.9%). The naysayers need no fuel – and I am loathe to give some to them – but that is bad. Damien Harris is out, and other than those two RBs, no one on NE has more than 12 carries on the season. Stevenson should be a carry monster. Adding that the Bills give up the fifth-most YAC/Att (2.8) feels like hitting myself in the groin with a bag of nickels, but free money will numb it up.

Recommendation: o62.5 at -115. If you like this reasoning, Stevenson’s longest rush at o14.5 is a consideration too.

Working on the Three Props article for this wk, & needed to look into if Yds After Contact & Broken Tkl % are correlated. Feels like they should be, but we don't risk $ on feelings. This was a time when intuition was on pt.
Broken Tkl % vs YAC/Att for RBs w more than 50 car pic.twitter.com/To8skmqceZ

The game script calls for a close game where the Bills should utilize an underneath passing game, meaning a shorter time to throw and a lower average depth of target with a higher number of attempts and completions.

Recommendation: o22.5 at DK or MGM. FYI, that incongruent vig for the over at Bet US is part of why you always check multiple books

The game script mentioned Christian Barmore being out. Judon is still a very good player when Barmore is out, but his absence impacts the amount of attention offenses can give Judon. The snaps/pressure rate remains very similar, but it takes Judon a lot more snaps to get his sacks when Barmore is not on the field.

The Bills know Judon is a game wrecker and they will have to give Spencer Brown additional help on the right side as Judon generally takes snaps from the defensive left. The Bills recently gave Brown help against Minnesota’s excellent pass rushers, and while Brown was not great in that game, he was not the reason they lost.

Also, Allen remains elite at preventing pressure from becoming sacks. He has the fourth-lowest rate of pressures converted into sacks (14.4%, PFF)

Also, any time to post this video of Allen owning Judon;

Containing Josh Allen was top priority for the Pats like Judon said earlier in the week. He’s in coverage towards the bottom of the screen (red sleeves), re-routes Beasley, then eyes Allen. While Bentley at MLB wraps around the other side for containpic.twitter.com/XWv39ATv09

Von Miller’s injury brings potentially huge changes for the Bills’ D, but the Pats WRs are not designed for high performance, and if the wind isn’t helping, Belichick has not proven he can stop Allen in two years. That said, the Bills need to find ways to access some easy yards, which they simply haven’t done enough of this season. Be prepared for another close game that the Bills have a better chance of winning because we have a Josh Allen. Bills 27 – Patriots 23

Tail ’em or fade ’em, let me see those winnings on Twitter @LowBuffa.