Week 14 of the 2022 NFL season brings the Buffalo Bills their first rematch of the year in the form of the New York Jets. It’s an opportunity for our Bills to exact a little revenge for their second loss of the season back in Week 9, when it felt like the Bills gave it away.

Another opportunity for revenge is Three Props against the books. Last week was only our third losing week, but we were so close to sweeping. The lone bright spot was Matthew Judon’s sacks under, while Rhamondre Stevenson finished with 54 yards and didn’t get many carries in Q4 as the Pats tried to come back, and Josh Allen finished with exactly 22 completions, so the under barely hit (I’m looking at you, early dropped passes by Dawson Knox and Devin Singletary). If you took the extra recommendation on Stevenson’s longest rush, at least you broke even. We’ve learned our lessons and are going to take advantage of this rematch. Let’s get that analysis money.

BetUS has live wagering on all major games, the best betting variety in the business, an easy deposit & withdrawal process & the Fastest Payouts in the Industry.

The biggest differences in this rematch might seem like the loss of Von Miller or the Jets pivoting away from last year’s number two overall pick, Zach Wilson, to the impossibly generic-sounding Mike White. What? Bobby Vanilla wasn’t available? However, the biggest difference in this game will be a player who will have played in both games – Josh Allen.

Angry Josh Allen plays at another level, dominating teams that have previously beaten him (like these #Jets) to the tune of 367 yd/game and a 23:4 TD:turnover ratio.@UberHansen joins @GregTompsett & @AaronQuinn716 to break down this #Bills matchup:

Allen’s numbers against teams he lost to are remarkable, but the recent string of correcting mistakes is also crucial. After back-to-back-to-back weeks of throwing two picks and tossing in three fumbles, Allen consciously decided to play more within himself. Allen has had one interception and two fumbles, which aren’t always his fault, in the last three games. Against the Jets in Week 9, if Allen doesn’t throw the red zone INT on the first drive of the game, or the INT at the -22, setting the Jets up for a TD, the Bills likely win despite not playing their best.

Those caveats in place, the Jets have begun to show some specific cracks, particularly on passes to RBs, which will come up later. For now, consider their  EPA/Att Allowed on passes under 10 Air Yds to RB

That drop-off is significant and plays into the skill set of the Bills developing young difference-maker, James Cook.

The Jets will be annoying with their run game, and Garrett Wilson might challenge for Offensive Rookie of the Year if Wilson hadn’t been his QB for a large swath of 2022. Mike White has proven more effective than Wilson, which is akin to being the sharpest spoon: great feature but still not what you’re looking for. Sean McDermott and Leslie Frazier continue to dominate first and second-year quarterbacks, and the inexperienced White fits that mold.

The game script for this week calls for another low-scoring matchup where Allen does a better job of taking advantage of the Jets’ weaknesses, even if the Jets are able to control the Bills’ offense better than most. On defense, the Bills should dominate – not a shutout – but definitively be the better unit, in no small part due to a player who missed the first contest, Jordan Poyer.

Bills vs. Jets Preview: Can Buffalo get revenge in NFL Week 14?

Does anybody remember the last time the Bills had an injury report as clean as the Jets’ this week?

The DVOA matchup is the key factor on this bet.

The Jets’ offense against the Bills’ defense is #28 vs #1 in Red Zone DVOA. Even without Von Miller, the Bills’ D will cause the Jets’ offense to stall out on multiple possessions. New Jersey’s struggles in the most important part of the field, combined with the Bills’ excellence there, should lead to at least two makeable FG attempts from Zuerlein.

This is the running back bet teased in the Prop Shop video. The Jets’ run defense is legit. On the season (SIS):

The boys from Jersey are less dominant against the run from 11 personnel (1 RB, 1TE) since Week 8, falling to 14th in EPA/Att when teams run from that grouping. Even though they’ve unclenched a bit, they are still causing a stuffed run on 25% of those 11 personnel runs (third). So, there won’t be any rushing yards props here.

Running backs are flowing easy in the passing game though. Rates and ranks for the Jets’ D against RBs in all personnel groupings and just 11 since Week 8,

Cook has been slowly emerging leading up to his big game beating the Pats. In Week 9, Cook got four targets and Motor got five. It’s reasonable to expect Cook to continue to grow as part of the passing game and assume a couple of those targets to Motor, and given the Jets’ strength in other defensive areas, the Bills should look to spotlight this deficiency.

It is rightfully a little disconcerting that Cook got only one target as recently as the Cleveland and Minnesota games, but every game he has a reception in has hit this over. 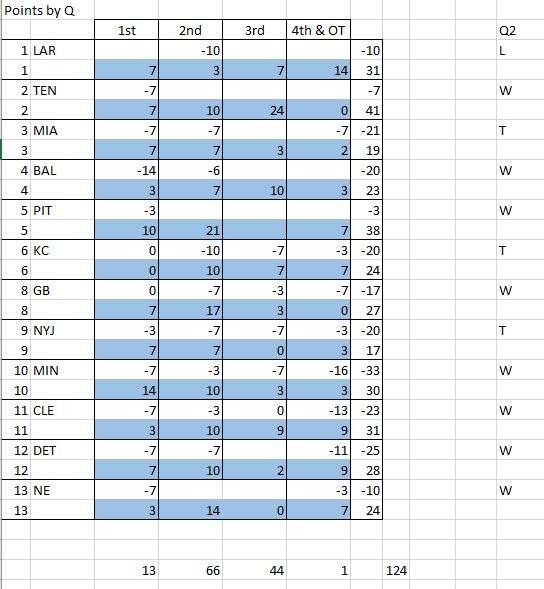 Bills Mafia already knows this opposing defense is real even if the QB is questionable. Expect a close-fought game with Josh Allen making smart decisions in key moments to bring home the W. Take the Bills for the win, and take the Jets to cover: NYJ 16 – BUF 24

Tail ’em or fade ’em, let me see those winnings on Twitter @LowBuffa.

James Cook’s role has been a slow build, but as we all have known that role could be key to the Bills offense late this season. @ErikJTurner chronicles Cook’s up and down year.