The Week 14 matchup between the Buffalo Bills and New York Jets is going to be another slugfest. The Jets gained a lot of confidence in their win over the Bills back in Week 9, which is big for a young team. That was quite evident when their media team made a mini movie outlining all of the moves they have made to combat the Bills.

But when I look back at this game, I saw a Bills offense that had some good ideas, especially when it comes to how to attack the Jets, but I don’t think their offense had rounded into form yet. But in this matchup, I feel like their weaponry is a little more defined.

It’s a copycat league so Bills fans shouldn’t be surprised if the Bills have the running backs as one of their main plans of attack. Here are some of the passing numbers the Jets have surrendered to running backs over the last few weeks.

Running backs were a major portion of the plan in the last matchup between the Bills and Jets, you just may not have realized. If we look at the money down – third down, the Bills RBs were primary options on at least half of their third down passes.

On the first third down of the game, a 3rd-and-5 situation, the Bills align in Empty. The formation and pre-snap motion easily uncovered Man coverage and Josh Allen hit Devin Singletary for an 11-yard gain. 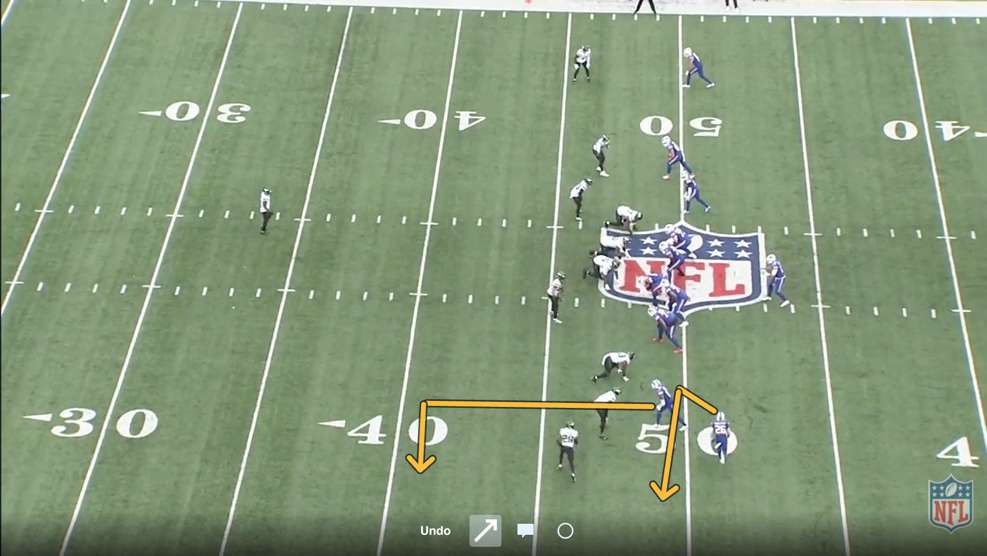 On the next third down situation, a 3rd-and-10, this time in the red zone, offensive coordinator Ken Dorsey dialed up a Rail route for new weapon RB Nyheim Hines. 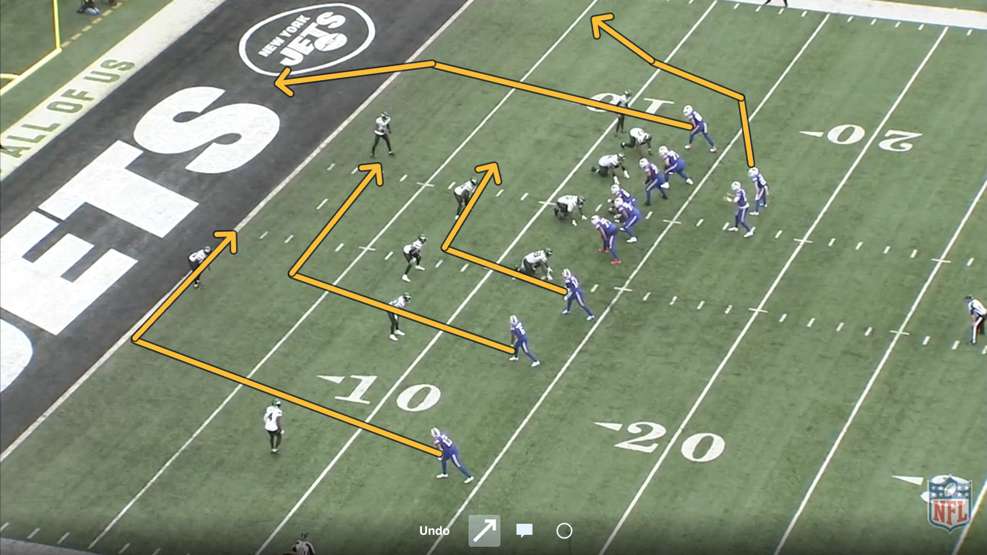 But the Jets did a great job of capping those vertical routes by TE Dawson Knox and Hines. So Allen played outside of script and scrambled for 11 yards to reset the downs. 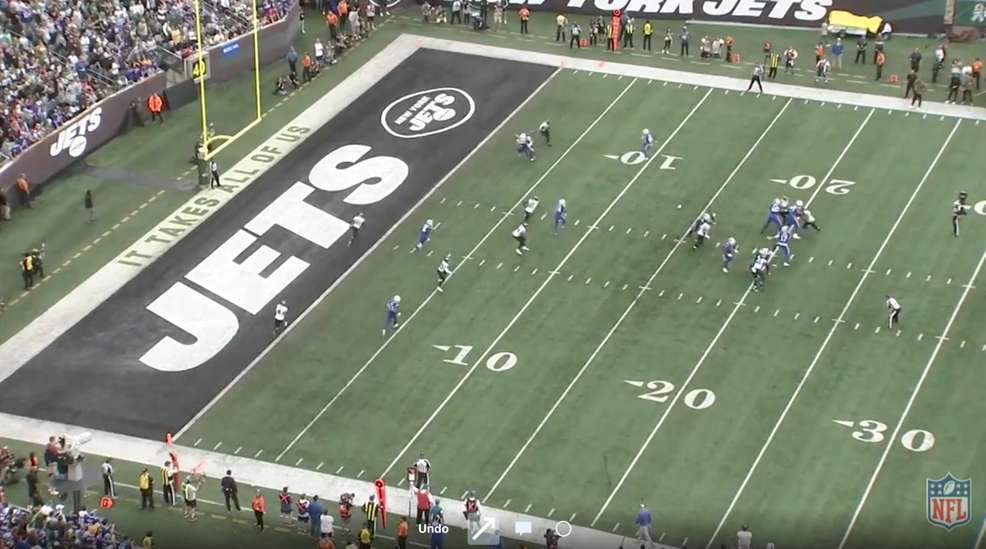 In the second half, on this 3rd-and-6 situation, Dorsey used RB James Cook much as he used him against the Patriots – as an easy button. If the defense wants to play Man coverage, dial up some plays to get it to him in space. Wide receiver Isaiah McKenzie forces Cook’s defender to work over the top and the Bills move the chains. 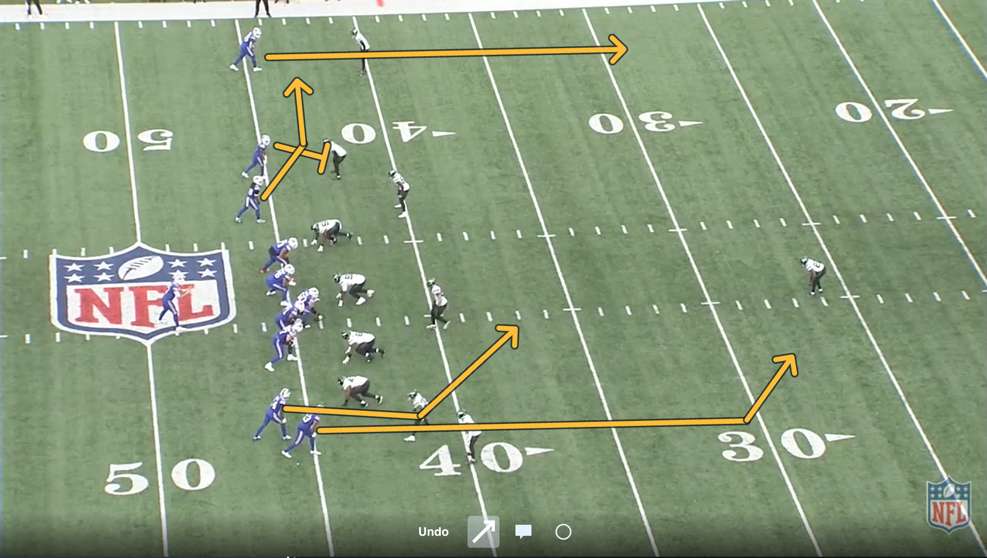 They even tried sneaking Hines deep, on 3rd-and-9 in the fourth quarter. It’s a great call, too, given the single high look. 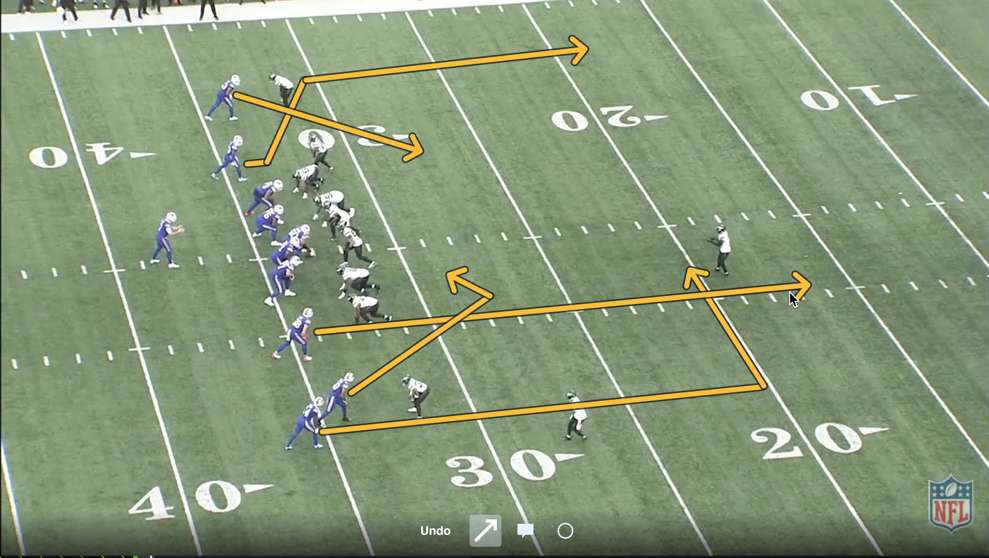 But the running back gets disrupted at the line of scrimmage. 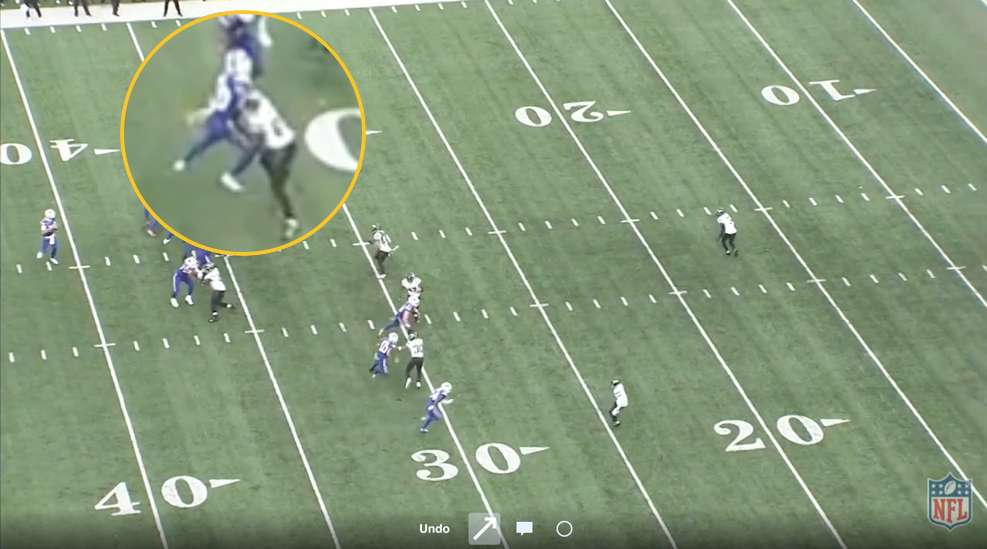 So the separation his Switch release and speed were supposed to create aren’t maximized. 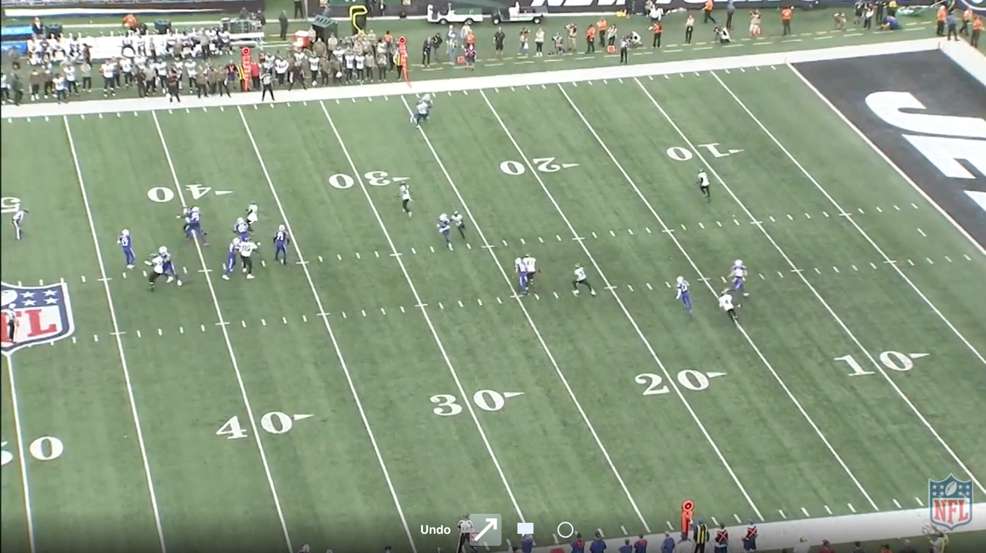 The Bills running backs saw 10 targets in their last matchup, including this pass that was intended for Cook. The Bills align with the formation into the boundary, so three eligible receivers into the short side of the field. Given the area of the field but also the short side of the field, the decision-making and placement of passes must be on-point. Allen appears to be initially trying to get it to Knox to the Post, but Knox is slow to declare his break. 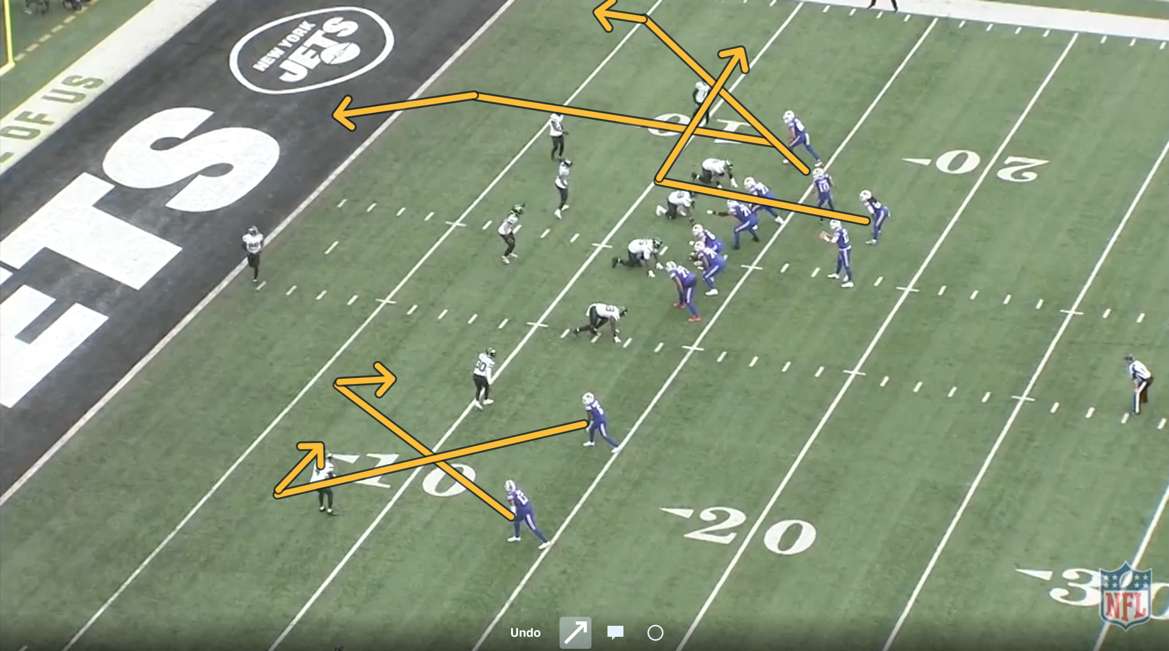 Allen has set to throw it to Knox, but with the route in limbo, his head is telling him to get to the outlet – Cook. But his body isn’t in position to cash that check, and it’s too bad it wasn’t because if thrown on schedule, Cook had some separation. 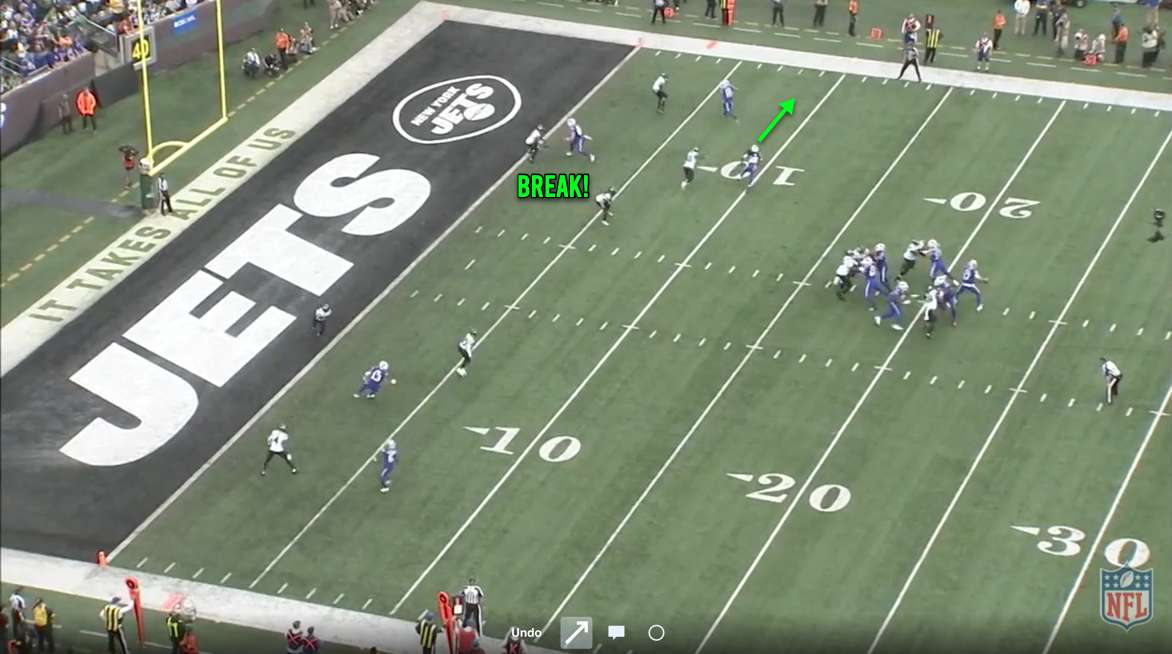 Teams have used their running backs as primary options against the Jets with much more efficiency than the Bills did in that Week 9 matchup, but I think that had a lot to do with the pieces that were still figuring out their roles in Cook and Hines. More importantly, Dorsey was also tinkering with how to do it consistently.

In Week 12, the Bears got RB David Montgomery matched up vs. CB Brandin Echols. 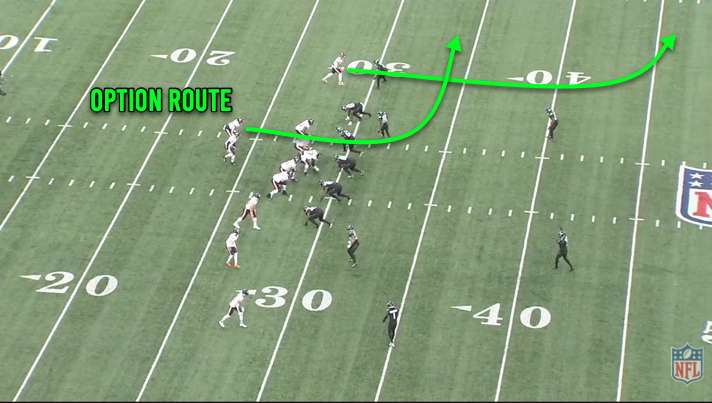 The coverage was tight, but Montgomery broke the tackle and scampered for 26 yards. 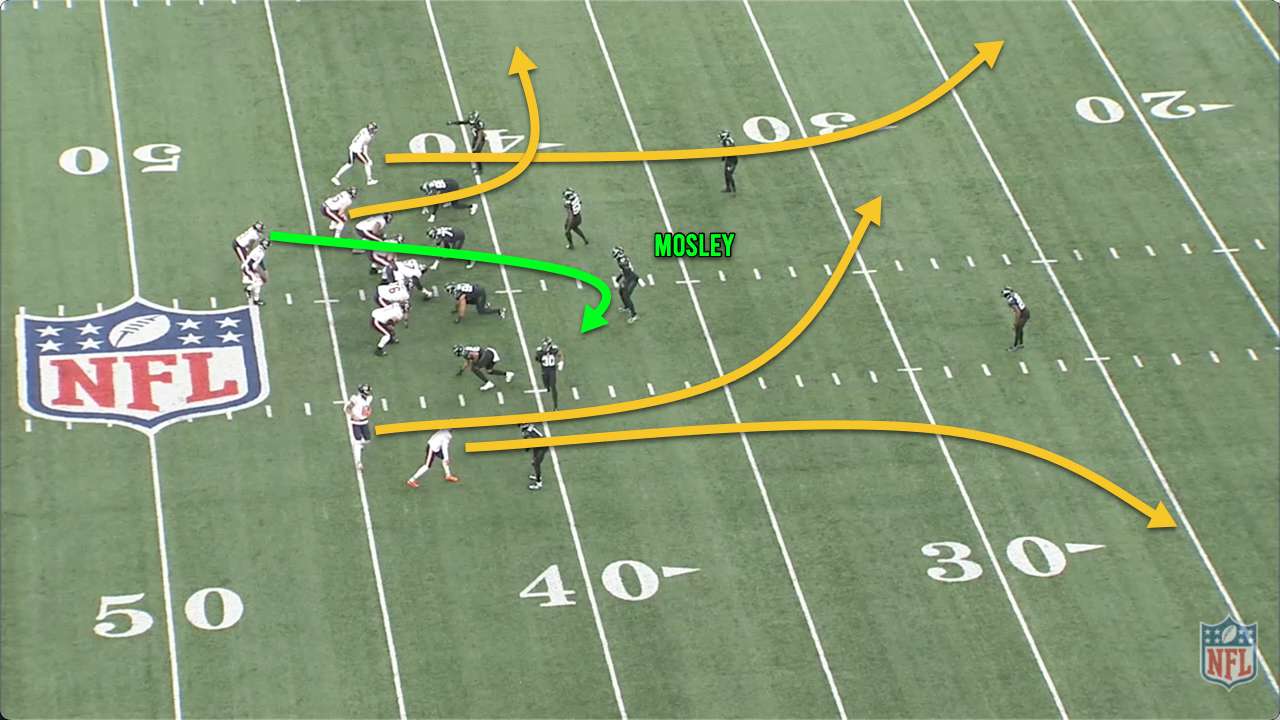 The routes clear out the coverage and Evans turns a simple check-down into a 33-yard gain. These are the kind of plays the Bills and Allen leaned on the last few weeks.

The Jets’ defense is ranked fifth in Football Outsiders DVOA metric, they are a very talented unit. They, much like the Bills’ defense, like to cap vertical routes to minimize big plays down the field, then on particular downs will play some tight Man coverage and create chaos. In that first matchup, the Jets used more Man coverage than what many expected. In that game, the Jets played Man coverage 38% of the snaps. Their current average for Man coverage is 23%. That shows you how much confidence the Jets’ staff has in their defense, specifically how well their guys can cover paired with their pass rush. Outside of wide receivers Stefon Diggs and Isaiah McKenzie, the Bills don’t have many targets that can beat Man coverage, or simply run away from coverage. But if you throw James Cook and Nyheim Hines into the equation, now you may be in business.  They can run away from linebackers and safeties but also turn a three-yard check-down into an explosive play. These are two players who can help the passing game whether the defense is in Man or Zone and they also match up very well against guys that would line up across from them.

I think Dorsey knew that in the first matchup, and after watching the Jets games preceding this Week 14 matchup, I expect it to be a major portion of the game plan.