An outsider’s reaction to Bills’ Week 1 loss to Steelers

The first Sunday of the 2021 NFL season is in the books and boy I am glad football is back! Granted I wish Week 1 got off to a little better start for a couple of AFC Contenders. So what exactly is going on here?

Drawing inspiration from the incomparable Jay-Z… Let me introduce myself… My name is Rich Hanes (@burnriversports) and some of you may know me as one of the three “amigos” from your very own Cover 1 Fantasy Football Show. But what exactly am I doing HERE, typing words about the Buffalo Bills? If you listen to our show you know that I am an avid fan of all things Cleveland, and specifically the Cleveland Browns. As a Browns fan that likes to devour home team content I often find myself looking for thoughts and opinions in addition to, but outside of the local media, podcast, or blog space. I want to read opinions that are not biased through orange and brown lenses.

That is what I hope to provide all of you here. An honest opinion of how I thought the Bills played from time to time for each of you to marinate on and consume like one of those big juicy steaks Greg Tompsett prepares before each game. Some weeks I may infuriate you, some weeks I might help talk you off the ledge (or in CLE terms, the I480 bridge).

So let’s establish a few things before I dive into Week 1.

Let’s dive right in. Going into Week 1, I expected the Bills to handle the Steelers. I bet on the over (48 pts) and assumed the Bills would cover and win 30-20. I know the Steelers have a great defense, but with T.J. Watt missing all of training camp, some internal distractions going on in the Pittsburgh locker room, and the Pittsburgh offensive line woes, I was looking forward to watching a beat down of the black and yellow.

As I sat at the Riverwood in Lakewood, OH watching this game that did not come to pass. What happened?

Play Calling was Suspect – As someone who knows a thing or two about Brian Daboll from his time in Cleveland, I feel he can get too cute and overthink the game plan at times. I felt this happened against the Steelers. I realize Buffalo is not a run-heavy team, but Daboll could have benefited from trying to establish a traditional run threat earlier in the game. The strength of the Steelers’ defense is certainly in their front seven, but opening with three pass plays after McKenzie’s 75-yard opening kick-off return I thought was a mistake. Only getting 3 points out of that field position was a bit deflating. On the very next drive, Daboll handed it to Singletary twice resulting in 10 yards and a quick first down, but he would only see three more carries in the first half and 11 total for the game. One other call that made all of my friend group grown was the 4th-and-1 decision to pitch it Breida on the Steelers 41 yard line that resulted in a turnover on downs. Too cute.

Josh Allen was not Decisive – This certainly could have been due to the pressure the Steelers were able to generate without sending many extra defenders, but I felt he often looked a bit panicked. I do not think the flow of the game required him to throw 51 times, which is another indictment on play calling, but he needs to be better than 30-of-51 even against the Steelers and strong rush.

Levi Wallace – Wallace had a poor second half and you could tell the Steelers were saw he was struggling and looked to pick on him. His coverage on the pass interference penalty was pretty good, but he has to get that head turned around. That PI penalty came on a critical 3rd-and-7 around midfield, on a drive in which the Steelers scored to take the lead for good a few minutes later on a touchdown pass over… Levi Wallace.

Offensive Line had a Rough Day – I won’t spend too much time here as I touched on it above, but eight QB hits and three sacks when the Steelers were basically just sending four pass rushers isn’t good enough. As stated, I certainly understand the Steelers have one of the better front-sevens, but as a unit, you need to be better than that.

Blocked Punt TD – This one is obvious, but the timing of it could not have been worse. The Steelers had just taken the lead 13-10 early in the fourth quarter. The Bills needed to at least pick up a couple of first downs to swing some momentum back in their direction and flip the field position over. Three straight pass plays led to negative two yards after a sack of Josh Allen on 3rd down and the rest is history. Punt Block for a TD and in less than two minutes the score went from 10-6 Bills to 20-10 Steelers.

It is certainly a game that I felt Buffalo was going to slowly run away with and it just never happened. I have read some reactions in which Bills writers/fans feel the game was called clearly in favor of Pittsburgh. Watching the game in real-time as an outsider, I did not feel that way. There was one intentional grounding call against Big Ben early that I thought was missed.  It caused the bar I was watching the game at to yell some obscenities at the TVs, but outside of that, I don’t feel the refs played a major factor in deciding this game one way or the other.

Good news is that it is only Week 1 of a long NFL season. Overreaction is always out of control on the Monday after opening weekend, especially when there are expectations to win. Fear not though, #BillsMafia, you will be 1-1 after a visit to Miami in Week 2 of the NFL Season. 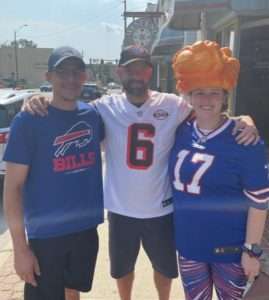 Meeting a few members of #BillsMafia outside of the Bills Backers bar (Around the Corner) in Lakewood, OH