Studs and Duds from Bills’ 43-21 blowout Week 3 win vs. Washington

The Buffalo Bills earned their second consecutive victory Sunday in a 43-21 romp of the Washington Football Team. After being carried by their defense for two weeks, the offense finally clicked in Week 3, totaling 481 yards in a performance that saw them convert 29 first downs and hold the ball for over 35 minutes.

Here’s a look at the studs and duds from Buffalo’s big win. 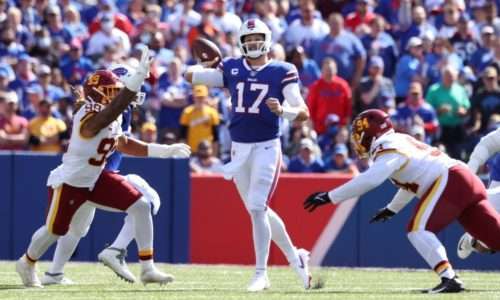 Josh Allen struggled to find any sort of consistency in the first two games of the season, completing 55-percent of his passes for 449 yards, three touchdowns and one interception. But against Washington, Allen found his rhythm early and got back on track. He completed 32-of-43 passes for 358 yards and four touchdowns with zero interceptions.

He pushed the ball downfield at an exceptional rate, completing 12-of-17 passes that traveled 10-plus yards in the air for 218 yards and three touchdowns. Allen was calm and poised when facing pressure, completing 5-of-8 passes on the run for 76 yards and two touchdowns.

He connected with eight different receivers during the game, with three catching at least five passes and three catching touchdowns. He added another rushing touchdown, bringing his total to five for the game. Allen clearly shook off the rust after admitting that he allowed his struggles from the first two games to get to his head.

With a favorable matchup coming up against the Houston Texans in Week 4, Allen has a chance to build upon this week’s dominant showing.

Isaiah McKenzie had two quality games to start the year, but had a blunder that cost the Bills in a big way Sunday. Swirling winds resulted in Dustin Hopkins’ kickoff to hang in the air and McKenzie wasn’t able to field the ball. It hit the turf, took a bad bounce and was recovered by Washington. Shortly after, Taylor Heinicke rushed for a touchdown to bring the game within one touchdown.

If it wasn’t for Buffalo’s offensive explosion, this could’ve been a crushing blow to what was a 21-0 lead just minutes prior. McKenzie finished the day with three punt returns for 26 yards. Marquez Stevenson is eligible to return from IR after next week’s game, and as explosive as McKenzie is with the ball in his hands, he will need to prove that he can be relied upon in any situation if he hopes to hold onto the return duties. 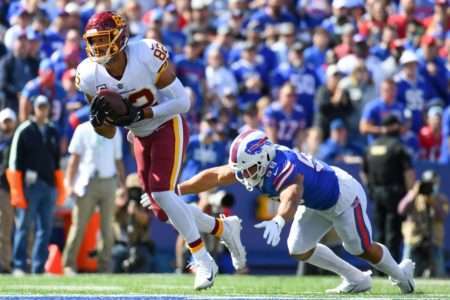 Milano’s $41.5 million deal looks like an absolute steal. On Sunday, he stacked together his third huge game of the season. Milano tallied six tackles, two tackles for loss – including a devastating hit on a fourth-down stop – one pass breakup, and a fumble recovery after a Tre’Davious White punchout on Washington tight end Logan Thomas.

Milano is all over the field and his energy pops on tape. He can run, cover and hit and he’s seemingly never out of position. For the season, he now has 15 tackles, six tackles for loss, five quarterback hits, two pass breakups and two fumble recoveries. He’s playing like an All-Pro and is a major contributor to the success of the Bills’ defense thus far.

Buffalo’s front office and coaching staff love Cody Ford – and it’s hard not to. From a physical standpoint, he’s everything you look for in a guard. He’s big, powerful and can move. From a personal standpoint, it’s hard not to love his story of overcoming demons to get into a better headspace this season after dealing with several injuries early in his career.

But on the field, he’s been wildly inconsistent – particularly in pass protection. On Sunday, he was tasked with blocking one of the most impressive nose tackles in the NFL in Da’Ron Payne, and as expected, he struggled mightily. According to Pro Football Focus, Ford allowed 12 quarterback pressures against Washington, with Payne registering 11.

As for the rest of the offensive line, they fared exceptionally well, given the circumstances. Jon Feliciano had a surprisingly strong game against another dominant interior defensive lineman in Jonathan Allen, who finished the game with three tackles, one hit and three total pressures. Montez Sweat and Chase Young combined for six tackles and two quarterback hits – production that any offense will take against two edge rushers of their caliber.

All in all, Josh Allen’s poise and pocket maneuvering allowed him to shake off pressure and find receivers downfield, mitigating what could’ve been a disastrous day for an offensive line that’s still finding their bearings.

I highlighted Tre’Davious White versus Terry McLaurin as a matchup to watch entering this week’s game. However, i wasn’t aware that White would shadow the budding superstar receiver for the majority of the game. White rose to the occasion, playing tight man coverage on McLaurin all afternoon, limiting the former Ohio State product to just four catches and 62 yards on seven targets.

McLaurin is one of the league’s best and most explosive route runners and White locked him down for nearly the entire game He added a forced fumble after a Logan Thomas catch that was recovered by Matt Milano. White is off to a hot start this season and proved that he could rise to the challenge of trailing No. 1 receivers all game.

Edmunds had an impressive pass breakup at the line of scrimmage, but aside from that play, he had a rather underwhelming game. He finished with seven tackles and didn’t make any huge mistakes. However, he whiffed on a few tackle attempts and struggled to get off blocks. On Taylor Heinicke’s touchdown run, Edmunds miscalculated the angle to the sideline and ran to the endzone. He’s a fine player that’s not going to ruin things on defense, but in contrast to Matt Milano’s energy and level of play, Edmunds just doesn’t look like an upper-echelon linebacker worthy of a mega-deal that he’s likely seeking. 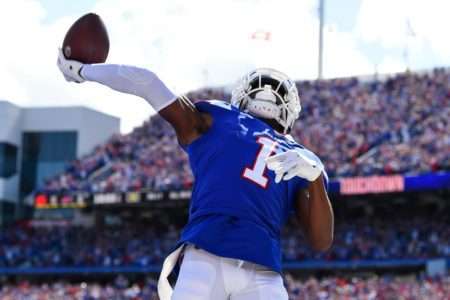 Emmanuel Sanders had his coming-out party in front of the home fans at Highmark Stadium, catching five passes for 94 yards and two touchdowns. Sanders’ first touchdown was a 28-yard dart from Josh Allen on the team’s opening drive of the game. He added a huge 41-yard grab later in the game. Sanders is a slippery route runner and showed that despite being 34-years old, he can still threaten opposing defenses at all levels of the field.

‘He does everything right’: Bills teammates praise Emmanuel Sanders after strong Week 3 outing

Zack Moss rushed for 60 yards on 13 carries, adding three catches for 31 yards and a touchdown. He fought for every yard, showing physicality, power and wiggle with every carry.

Dawson Knox continues his impressive season. He dropped a pass, but it was thrown a bit behind him. He finished with four catches for 49 yards and a sensational athletic touchdown catch in which he jumped and adjusted his body to come down with the pass in the front corner of the endzone.