Day two of the Buffalo Bills’ 2022 training camp is in the books here at St. John Fisher University, a much brighter and warmer day than Sunday.

The offense spent most of Monday’s practice looking to air it out because most of the segments were third-down situations. Fans saw many plays where there were five eligibles out in routes, which meant that the offensive line was all on their own. We saw David Quessenberry primarily working at left guard today and Tommy Doyle elevated at times to right tackle with Spencer Brown still seeing spot reps. Needless to say, the Bills’ defensive line was collapsing the pocket around Bills’ quarterbacks.

They did receive some chip and nudge blocks from running backs and tight ends, but overall, we saw Von Miller and others put Allen under duress for most of the day. Some of the musical chairs along the offensive line have to do with offensive line coach Aaron Kromer’s master plan, but some of that also has to do with left guard Rodger Saffold’s injury. Either way, Miller made the tackles work. His get-off and ability to drop his pad level and turn the corner are just so fun to witness. When linemen attempt to punch out, he is able to eliminate the striking surface and avoid blows much like we used to see boxer Floyd Mayweather avoid haymakers.

The defense once again won today. With most of the segments being third-down situations, the offense and defenses were bringing their A-game stuff. Some of the pre-snap pictures the defense was sending at the Bills’ quarterbacks looked to confuse them, but more importantly the wide receivers. There are some new pieces at tight end and wide receiver and the movement can confuse QBs and skilled players because the routes typically adjust based on the coverage. If the QB and receivers aren’t seeing the same coverage or leverage of a defender, the pass can lead to turnovers. You can see Josh Allen and Khalil Shakir discussing some of these details below.

After a miscommunication/misunderstanding by Khalil Shakir in a drill, both Josh Allen and Isaiah McKenzie went over to help the rookie understand.#BillsMafia pic.twitter.com/53hR19ABTE

The Bills QBs threw four interceptions. Two were by Allen. He attempted a touch pass to Stefon Diggs on an Over route. The ball sailed on Allen and when the ball does that over the middle of the defense, you are going to see the ball get picked off. This particular pass was picked off by All-Pro Po from his single high safety alignment.

Josh trying to drop it in the bucket but overshoots Diggs and Po picks it off. pic.twitter.com/r3jIlXE74i

The other interception was a miscommunication between Allen and his target. Allen put some air on it up the sideline but the receiver (couldn’t confirm who the WR was) appeared to break off the route.

Taron Johnson had a strong practice. He pitched in a couple of pass break-ups as the Bills quarterbacks looked to target Isaiah McKenzie. I love watching those two practice against each other. It’s pretty apparent that the Bills are going to play more man coverage and sharpening Johnson’s man coverage skills against the speed of McKenzie will pay off against the speed Buffalo will see in the slot this season.

The first two days of practice have been red zone and third-down situations and I am surprised at how few RPOs (run-pass options) we have seen. There were a handful in the red zone on day one. It seems like the offense has been more focused on the quick game the last couple of days, one-to-three-step drops by the QBs. But maybe we haven’t seen that many RPOs because they aren’t in full pads yet, but it’s something to keep an eye on. As Ryan Bates said in The Film Room a couple of weeks ago, the Bills’ offensive identity last season was the RPO game because Josh Allen is “the man.”

Allen and Diggs excelled when they went to their quick-game the past couple of days.

We have seen a lot of short motion by the Bills receivers towards the formation and then some under routes and one (dart) and three step slants (slant).

Routes that Allen hasn’t really had consistently in his repertoire but something that he has worked on this offseason so that the offense can reduce hits on him and get the ball to the playmakers so that the receivers can maximize yardage after the catch. Layups for the franchise QB could take some weight off of his shoulders on early downs.  Allen routinely targeted Diggs on those slants today on third and 1-3 yard situations, most of which where the quick WR was matched up against rookie Kaiir Elam. Elam has spent a lot of his time shadowing Diggs, and doing so up near the line of scrimmage in man situations. You can tell Diggs is ready for the regular season.

He was separating early with suddenness and late with active hands. He subtly pushed off of Olaijah Griffin as the ball dropped in.

Allen with the pump to his right then hits Diggs down the sideline. Diggs played with active hands and created some separation late to reel in the pass. pic.twitter.com/1QWFUs6tmc

Diggs has been a tough assignment for anyone including Elam, but this has been a great learning experience for the young defensive back.

The other two players who have stood out on offense are Gabriel Davis and Khalil Shakir. Davis continues trending towards being a star. When Allen was looking for an outlet late in a play, Davis would make a move to show his number to Allen. Davis separated on a dig route for a big play.

Shakir just continues to flash what I believe is his finest trait – body control. We saw it numerous times in college at Boise State, Shakir ran an in-breaking route in the intermediate area and was wide open against zone coverage, but the pass was hot and slightly behind the receiver. Shakir smoothly rotated his body counterclockwise to frame the pass, catch it, and then rotate right back into stride. It literally was this exact type of adjustment.

He had a few similar catches on day one where he adjusted to the pass whether it was high or low, and it’s those types of plays that will quickly gain the trust of QBs. 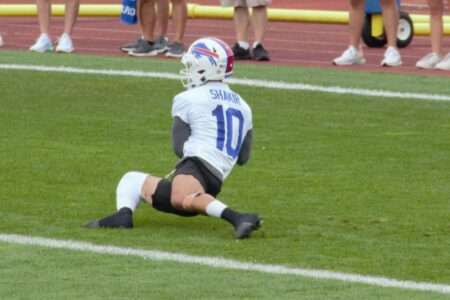 It was a great day for the defense racking up several turnovers and pass breakups in 3rd down situations. But it’s early in camp and that is typical, especially once we take into account the new pieces on offense – players and coaches included.