The Bills – yes, the Buffalo-based professional football team – made the biggest signing of this offseason by bringing in future Hall-of-Famer Von Miller via free agency.

Miller’s impact should be felt early and often this season, with the defensive end coming off of a campaign where he had 9.5 sacks (that’s 2.5 more than any Bill last year) and added two more in the Rams’ Super Bowl win. We’re only a week into training camp, and the acquisition is already paying dividends. Let’s examine five aspects that will paint a clearer picture of Miller’s impact and usage under Sean McDermott and Leslie Frazier.

(To see how excited I am personally to see Von Miller in Buffalo, fast-forward to the 56-minute mark.)

The Temple product is no slouch himself, earning a pro bowl nod in 2021. Dawkins, a man who always speaks his mind, was asked by reporters to describe Miller: “He’s more like elastic…He’s real springy and real slithery.” Getting to take first-team reps each practice versus Miller can only help the former second-rounder and the rest of the Buffalo offensive line take that next step in protecting their franchise quarterback in Josh Allen. 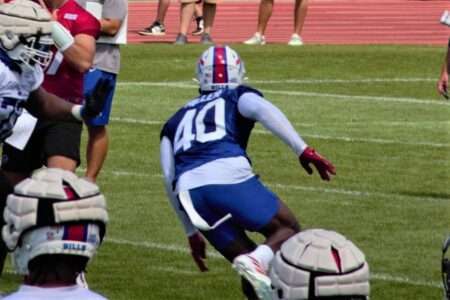 When Miller draws double teams, we instantly think of what that will do for the rest of the defensive line in Ed Oliver, Gregory Rousseau, Boogie Basham, etc., but his impact with the Broncos was evident at all levels, specifically at linebacker. LBs finished first and second in tackles for Denver in three of the last four seasons with Miller. The one outlier was a year where backers ended up first and third for the Broncos. To contrast that with recent Bills’ seasons, Edmunds was the only LB to finish in the top three in tackles for the Bills each of the last two years. Miller eating into the opposing offense’s attention pie should raise the stock of both Edmunds and Matt Milano in 2022 and beyond.

“He’s so open to helping the young guys and giving back and that is what you want out of your older players.” – Bills’ DC Leslie Frazier on Von Miller

Miller’s willingness to mentor his new teammates was evident early in Buffalo. His 2022 pass rush summit included second-year defensive ends Gregory Rousseau, Boogie Basham, and third-year end AJ Epenesa. The leadership continued in camp with Miller keeping the young bucks under his wing. His guiding eye was never more apparent than when he got a vet rest day, and instead of packing it in he was involved in all the huddles, coaching up his teammates, and was a voice of experience throughout his “day off.” 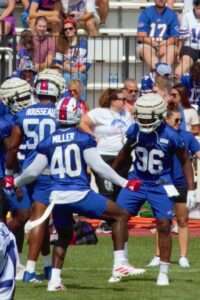 Let’s be honest, the number one thing everyone cares about when it comes to Von Miller signing with the Bills are sacks. Good news: he’s really good at sacking the quarterback. His 115.5 sacks place him 31st all-time according to pro-football-reference. Those 115.5 sacks are also the most for any active player, eight clear of Chandler Jones, who sits in second. The Bills would love for him to move up those rankings after they finished 2021 with 42 sacks, and their leader in the department was the departed Mario Addison with seven.

The question outsiders will ask is: what does a 33-year-old Miller have left in the tank? WGR550’s Sal Capaccio addressed this on Twitter with a few examples of players’ sacks at age 33+. They are Bruce Smith with 73.5, Reggie White with 61, and Julius Peppers with 48.5. Brandon Beane would take any of those totals during the life of Miller’s contract with Buffalo, and to be honest, you should expect him to do that same thing as the entire group is going to sport gold jackets before too long.

“We’ll come to a happy medium on what’s best” – Bills’ DC Leslie Frazier on Miller’s snap count in Buffalo versus his high usage in previous stops.

If there is one place where this marriage won’t be perfectly harmonious, it could be in Miller’s usage. The All-Pro has never played less than 76% of his teams’ snaps, including 79% for the Rams in the second half of last year. Meanwhile, the Frazier-led defense used a heavy rotation along the line with tackle Oliver seeing the highest percentage at 57.79%. As far as ends go, Jerry Hughes garnered the most snaps at 51.76%. The Bills had nine players earn at least 20% of the snaps along the line in 2021.

Where does the “happy medium” Frazier mentioned land? Could it be around 60%, just a few snaps a game higher than Hughes? That would be a career-low for Miller, but knowing he will take every high-leverage down should help ease that concern. Plus the Bills should be leading a majority of their games late, allowing several opportunities for the Texas A&M product to pin his ears back and attack the opposing quarterback.