It’s finally here. You’ve waited so long, fought through so many distractions, plowed through so much crazy, and now the day you’ve been longing for has arrived. That’s right. Tomorrow night we will make some money on the NFL 2022 regular season!

Three Props and a Cloud of Dough will bring you three prop bets each week with analysis to back them up. The focus will be on the Buffalo Bills and their opponents, but occasionally another prop might be too good to pass up. There are two goals here:

Those are the rules. That’s it. Let’s get started.

Every good bet starts from a thoughtful gamescript: how you foresee the game playing out informs what stats you believe players will pile up. If you haven’t at least thought through the game on a cursory level, don’t bet the game.

For the Buffalo Bills’ Week 1 contest with the Los Angeles Rams, I expect to see a high-scoring, back-and-forth affair between two very good teams. The defenses are also good and will have their moments, but there are mismatches for each offense to exploit, especially in Week 1, where teams have longer to develop their plan and have yet to put this season’s new wrinkles on tape anywhere.

A couple of notes:

Now that the time for preseason darlings has passed, everyone can go back to hyping Davis and his impending breakout year. While the Davis hype train is out of control, we’ve talked about how his improvement and increased role can still mean money even if he doesn’t reach the 150 catches, 3,400 yards, and 80 TD plateaus. The trick is to think realistically about Davis’ production for the specific game against the Rams.

The Rams are likely to defend Stefon Diggs with a heavy dose of Jalen Ramsey. Last year, the Rams began moving Ramsey around their defensive formations in ways they had not done before. In 2021, Ramsey played 325 snaps in the slot where his previous career high had come in 2020 at just 169 (stats from PFF). 2021 was Raheem Morris’ first year as DC for the Rams, and he returns this year, suggesting Ramsey will continue to move around, but Diggs will remain his primary mark. That leaves Davis with the other Rams CBs. Beyond Ramsey, the Rams used Darious Williams, David Long Jr., and Robert Rochell as wide CBs in 2021. Williams moved on to the Jaguars, but the Rams brought back Troy Hill after a one-year hiatus to Cleveland. HIll’s last year with Los Angeles under then DC Brandon Staley was the best of his career, but that was mainly from the slot. Long and Rochell both struggled in 2021 giving more than 65% completion rate with more than 13 yards-per-carry, and the vast majority of their snaps were out wide. The Rams plan on moving their CBs around again this year, but Davis should see plenty of chances to match up with Long or Rochell with Ramsey on Diggs and Hill in the slot.

Davis played 171 snaps from the slot in 2021 but was mostly out wide (378). The preseason is foolish evidence, but it indicated he might see even more of his time beyond there (12 wide snaps to one in the slot). Week 1 can be tricky betting because, as the Steelers showed last year, having so much extra time to prepare for a single opponent can lead to unpredictability. That caveat in place, I expect a high-scoring, back and forth, raucous start to the season with Prime Time Josh Allen connecting with his new WR2 in advantageous matchups against some of the Rams’ lesser CBs.

Allen averaged 44.9 rush yds/gm in 2021, but few want to see him risking injury with as many attempts per game as last year (7.18). Only the season will tell exactly what Ken Dorsey has in mind for designed runs with Allen, but it’s scrambling yardage that gets Allen over this total. There is mainly one opposing player who we can project will flush Allen from the pocket.

Aaron Donald is a whirlwind of shrapnel spending the game less than five yards from the franchise QB. Josh, you don’t have to prove yourself to us: you don’t need to try to stiff-arm the poisoned-horn Minotaur, just run, Josh, run. Donald has the entire package as a DT. Speed, hand fighting, footwork, quickness, strategic pass rush plans, and power. Mitch Morse slander will not be tolerated here, but he can struggle against powerful, bull-rushing DTs (think back to Cam Heyward last year), and Donald has power moves in his toolbox.

For our purposes, the Rams and Donald don’t need to force Allen from the pocket often. Three or four designed runs and an additional three or four scrambles, and Allen is at 6-8 attempts. According to SIS, Allen had 19 rushing attempts on scrambles forced by pressure. His average gain on those attempts was 8.79 yds. It’s tempting fate to have Allen run often, and the Bills should have him running less frequently than he did last year in the regular season, but Aaron Donald is not a regular human.

Recommendation: Bet the over anywhere but FanDuel, 0.5 units.

Oliver has sky-high expectations for the Bills in 2022, and he’s going to get started on them in Week 1. Remember the gamescript? A high-scoring game is generally a high pass attempts game, leading to more pass rush chances for Von Miller, Ed Oliver, and the rest of the DL. The Rams lost starting G Auston Corbett in free agency to the Panthers, and they appear to be replacing Corbett with Coleman Shelton, last year’s backup C. From left to right, the Rams’ IOL is

PFF grades have to be taken with a grain of salt because sometimes they are inexplicable, but their scale provides context on the quality of the Rams’ IOL last year. Their best interior pass blocker barely rated at a starter’s level.

It is not disrespectful to Jerry Hughes and Mario Addison to say they are not in Von Miller’s class, not even with Miller at age 33. Adding Miller should reduce the number of double teams Oliver faces, meaning he should be able to even increase his pass Rush Win Rate of 15% (ESPN), which was already good enough for seventh in the league last year. At 0.25 sacks, Oliver only needs credit for half a sack to hit the over. 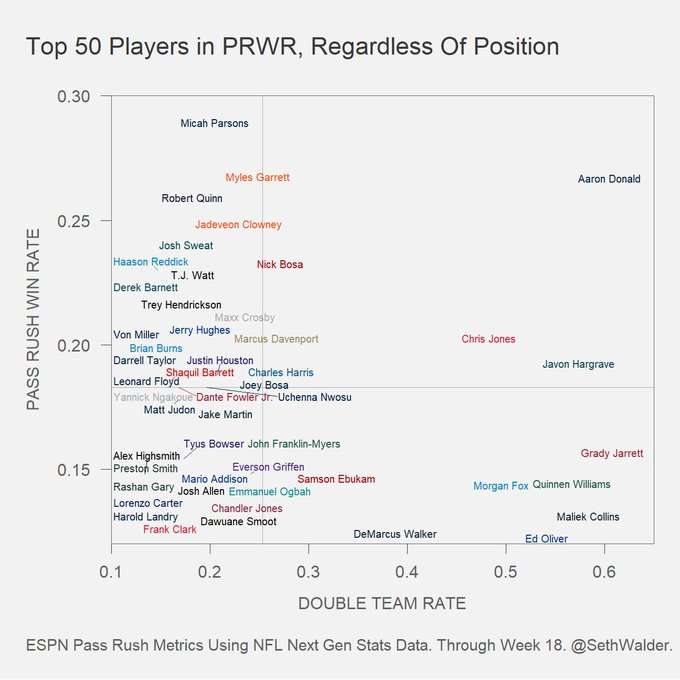 *DK is the only book currently carrying this prop.

Bet responsibly. Have fun. If your gamescript is different than mine, that’s cool – bet the way you think the game will go. No matter what, be sure to let me see your bets and your winnings on Twitter @LowBuffa.