How Gregory Rousseau built a strong foundation for a bright future

Buffalo Bills 2021 first-round draft pick Gregory Rousseau played 49.3% of the snaps in his rookie campaign, which is more than I honestly expected with the talent and experience the Bills had on their roster. Rousseau finished with 42 solo tackles, which ranked seventh on the team and first amongst all defensive linemen. Harrison Phillips was the next closest defensive lineman with 39 solo tackles and Ed Oliver was behind him with 33 tackles. Rousseau lapped his edge defenders in this statistic, posting 25 more tackles than the next defensive end veteran Mario Addison.

He made plays, albeit mostly in the run game, but the Bills needed him to keep offenses behind the chains on early downs.

Rousseau was elite as a run defender. He finished the season with 38 solo tackles against the run which was third among all edge defenders. His 35 run stops and 13.2% run stop percentage led all defensive ends last season. Defensive coordinator Leslie Frazier stated that Rousseau’s “ability to be able to take on blockers and be able to shed and make plays in the run game was big for us.” Watch his ability to engage the tight end then lift his outside arm to disengage and go make the tackle.

Rousseau’s size and length are the foundations of his entire game. His 34 3/8″ arms allow him, as I will say numerous times in this breakdown, to win first contact. He is able to win “first touch” and keep blockers at arm’s length or to disengage from blockers. 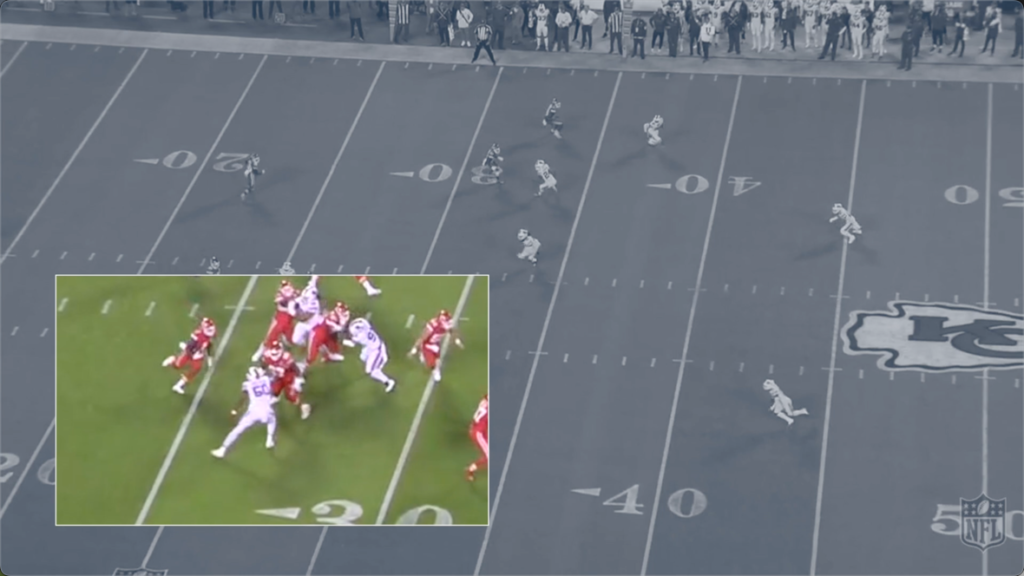 When teams attempt to run off the edge of the Bills’ defense, Rousseau was there to contain and or bring down the ball carrier.

The big defensive end is so good at getting positional leverage and hands in the proper place to control the blocker while containing the ball carrier. 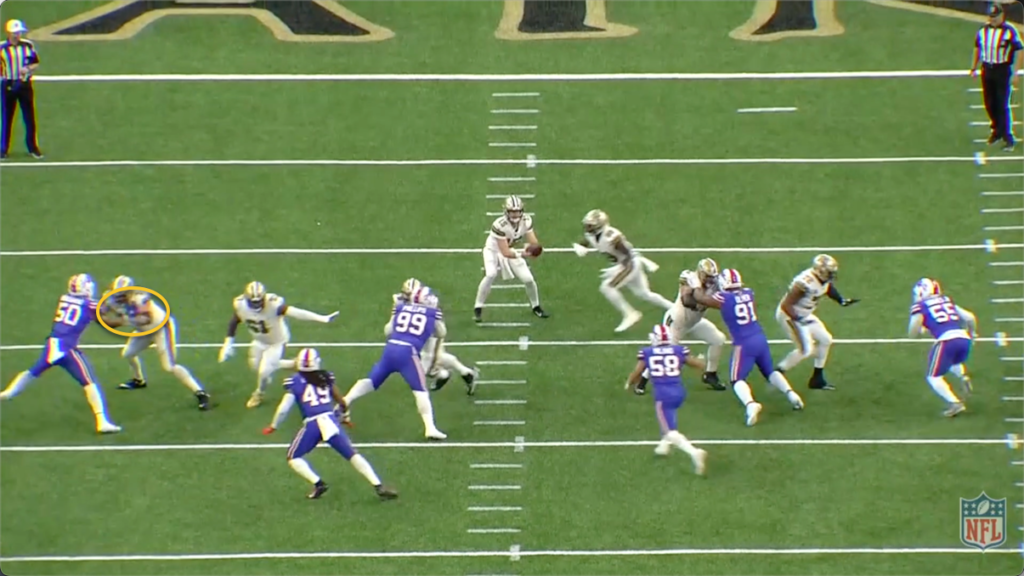 Once he has control of the lineman, he is able to use his feet to maintain leverage of the ball until the ballcarrier commits.

Rousseau made some big-time run stops in 2021, and a lot of them came on runs that were away from him. Plays that tested his processing and his closing speed. Plays where Rousseau had to process run to pass, eliminate his assignment then run and chase the ball. For example, on plays where the offense runs zone runs away from him, there is typically a bootleg element that Rousseau has to be cognizant of. He can’t just fly down the line of scrimmage at the running back, he must make sure that he eliminates the QB bootleg first. 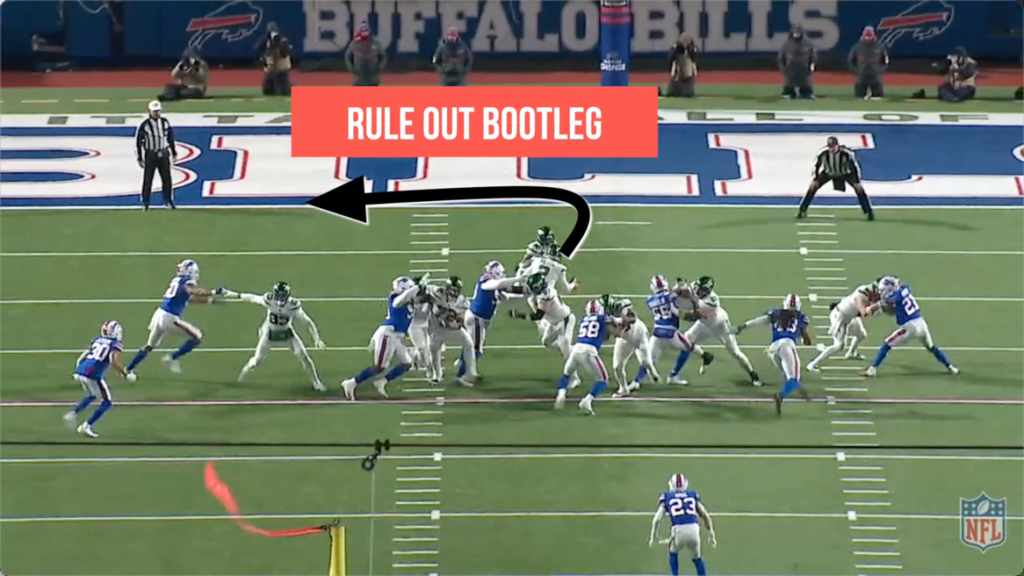 Once the handoff occurs, now Rousseau can use those long strides to show off his closing speed, hitting power, and or the ability to cast a wide net as a tackler. Rousseau missed ZERO tackles against the run, and only three missed tackles when teams passed the ball.

Rousseau is a physical freak. He’s a shade under 6’7″, and carries an 83 1/4″ wingspan which makes him very difficult to throw over.

Here’s another quick pass that is likely completed to the slant route if Rousseau doesn’t affect the pass pic.twitter.com/cr0rM0MB8f

There were so many plays where Rousseau’s length made life difficult for opposing quarterbacks to complete some of the most routine passes. Especially passes in the quick-game category. 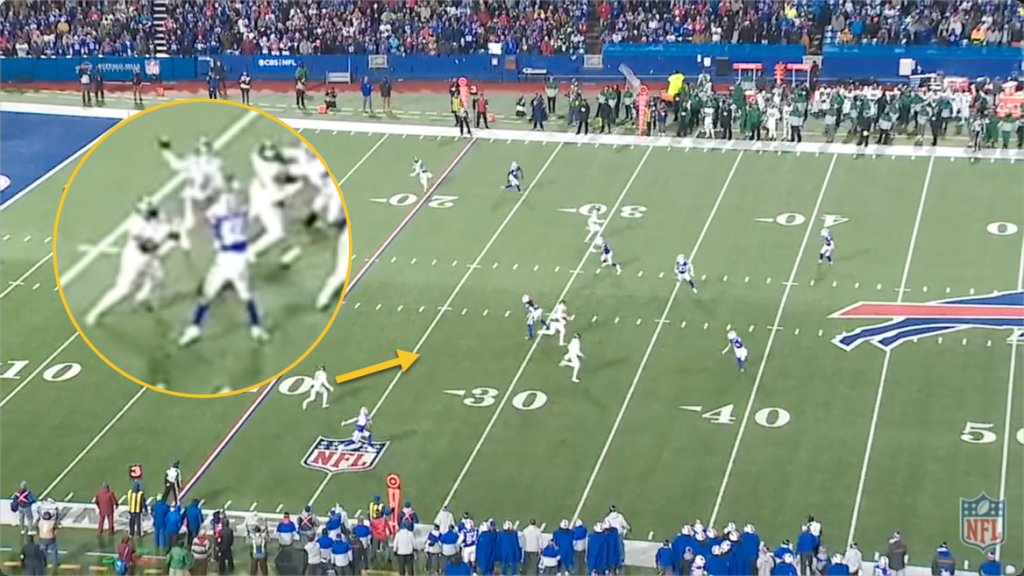 Passes that need to be on time, in rhythm, and thrown with some velocity in that 0-10 yard area. This allows a guy like Rousseau to cease rushing the passer when he knows he won’t be able to get home and instead get his hands in the air and bat down passes.

In 2021, Rousseau only batted down three passes which were tied for fifth among defensive ends. Emmanuel Ogbah led with 11 batted passes. But even when Rousseau wasn’t Mutombo-ing footballs, he was still able to affect the pass. He made this throw much more difficult than it should have been.

There were several of these plays where Rousseau’s length affected quick game passes and screens. pic.twitter.com/cLzzW6VBCe

But the most memorable play where Rousseau’s length clogged the passing lane came when Rousseau intercepted QB Patrick Mahomes in the Red-Zone. “Getting his hands up and coming away with an interception in the red zone to take points off the board, that’s a big-time play,” stated Leslie Frazier to the media during the season. It was a play where Rousseau had to process run to pass – he had to make sure that Mahomes either handed it off or didn’t keep it and get outside of the pocket. 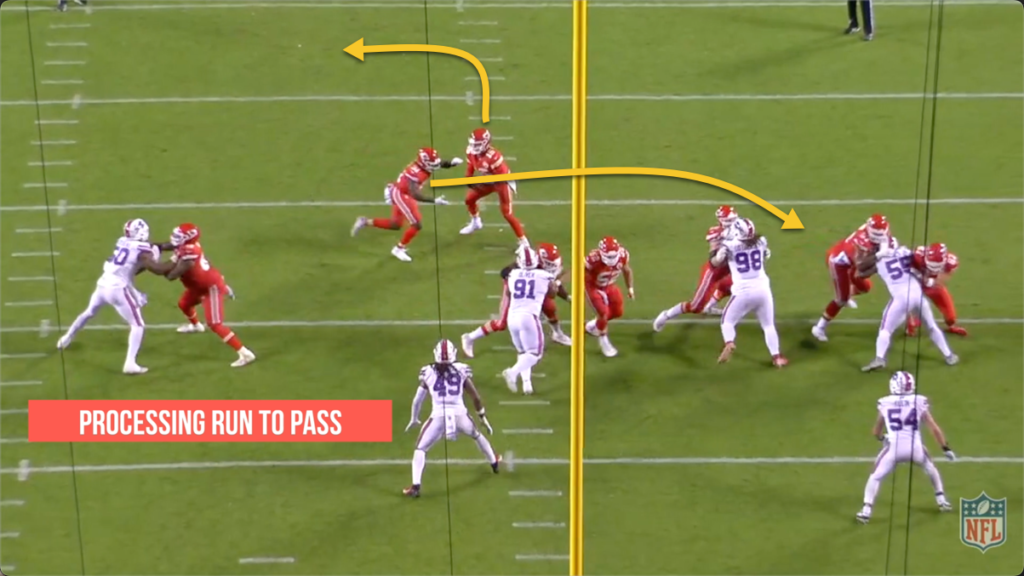 Once Mahomes kept it, Rousseau keyed in on the front shoulder and got his big mitts in the passing lane. 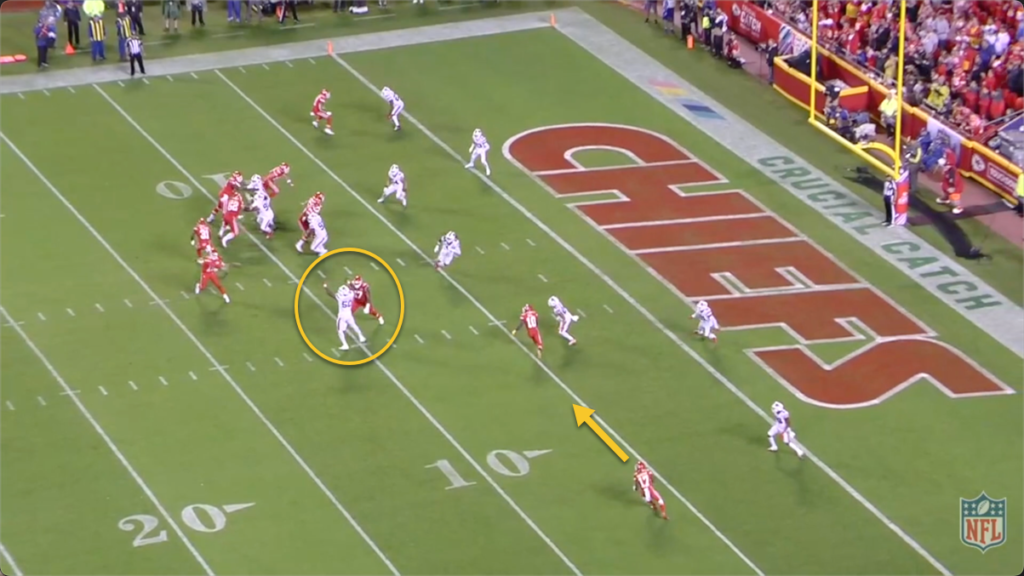 Wide receiver Mecole Hardman probably doesn’t score if the ball is completed, but the play by Rousseau was one of the memorable plays in one of 2021’s most memorable games.

Flash forward to their Divisional matchup where Mahomes attempted to throw another quick pass, but there was Rousseau to deter the throw in the first passing window. 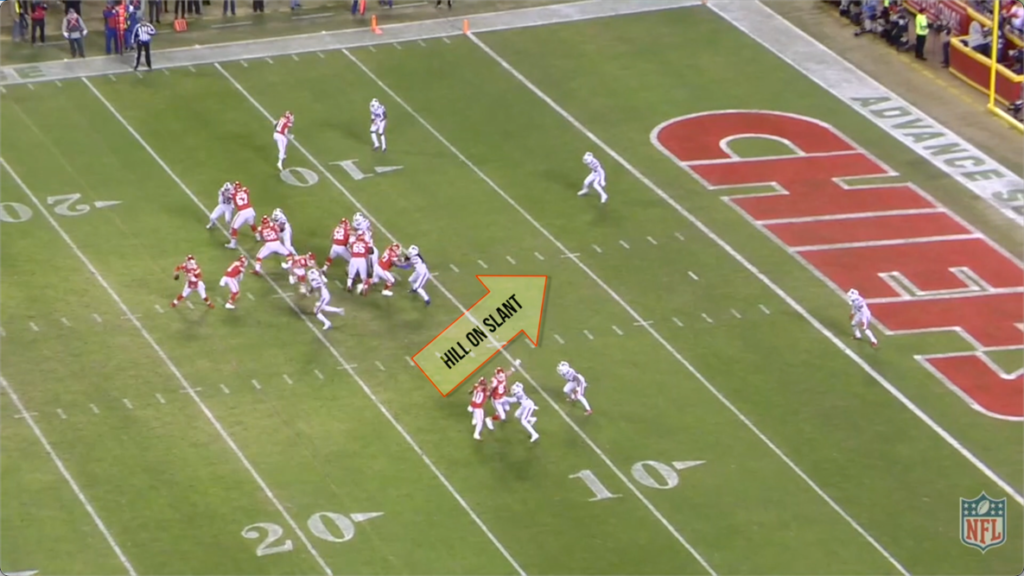 This forced Mahomes to reload and gave Taron Johnson time to close the cushion in order to get in a better position at the catch point. 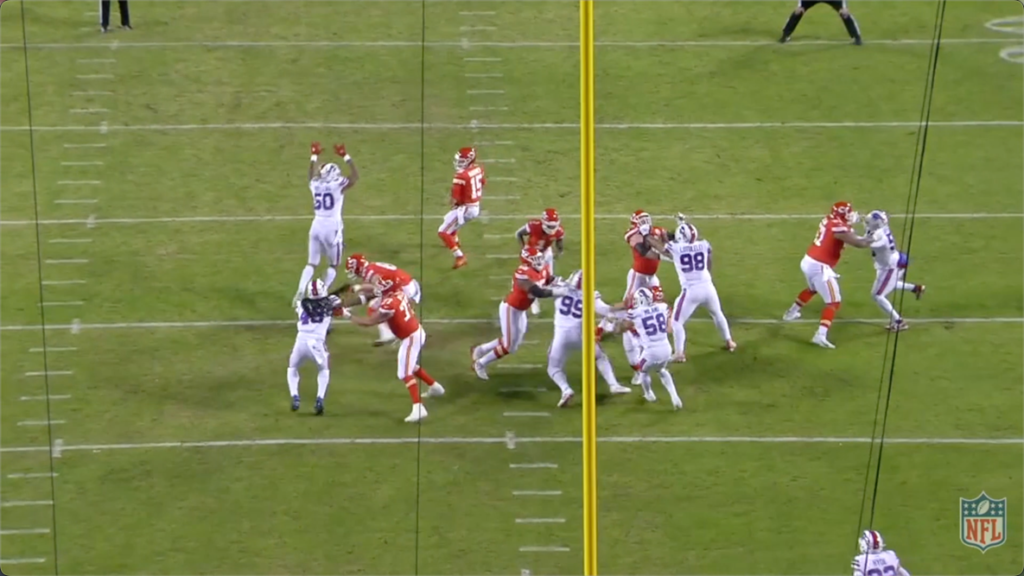 The pass needed to be perfect, but it was a tad out in front of Hill and the ball went incomplete. This is a much easier pass and catch if Rousseau isn’t in the passing lane, and given the split-safety look, there’s a good chance that Tyreek Hill scores if they complete this quick pass.

The rookie wasn’t quite the weapon I thought he would be when it comes to rushing the passer. Specifically, he wasn’t used up and down the defensive line like some of us expected. Rousseau finished with 36 total pressures including four sacks, six QB hits, and 26 QB hurries (PFF). All of those statistics minus one QB Sack occurred with Rousseau rushing from the left side of the defense.

For most of the season, Rousseau once again relied on his physical abilities and natural athleticism. There weren’t many reps where Rousseau had a complex rush plan or series of counters. Most of the time, Rousseau was focused on making first contact, and using his length and ability to generate power to collapse the width of the pocket. Like this rep against the Dolphins, a team that Rousseau feasted on. In the two games against Miami, Rousseau racked up 13 total pressures. On this play, Rousseau wins first contact. 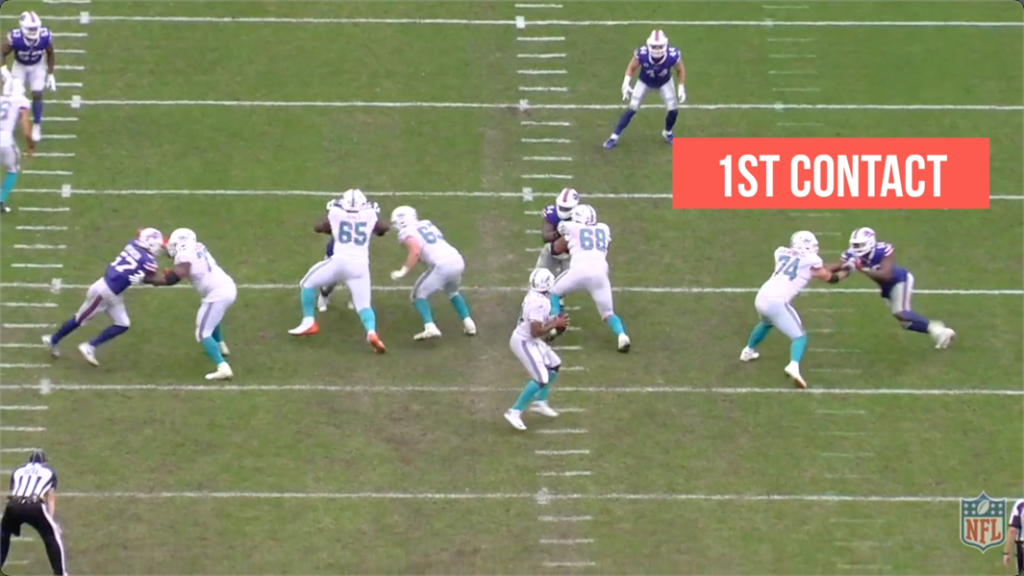 Then transitions from speed to power by generating power from the ground up. 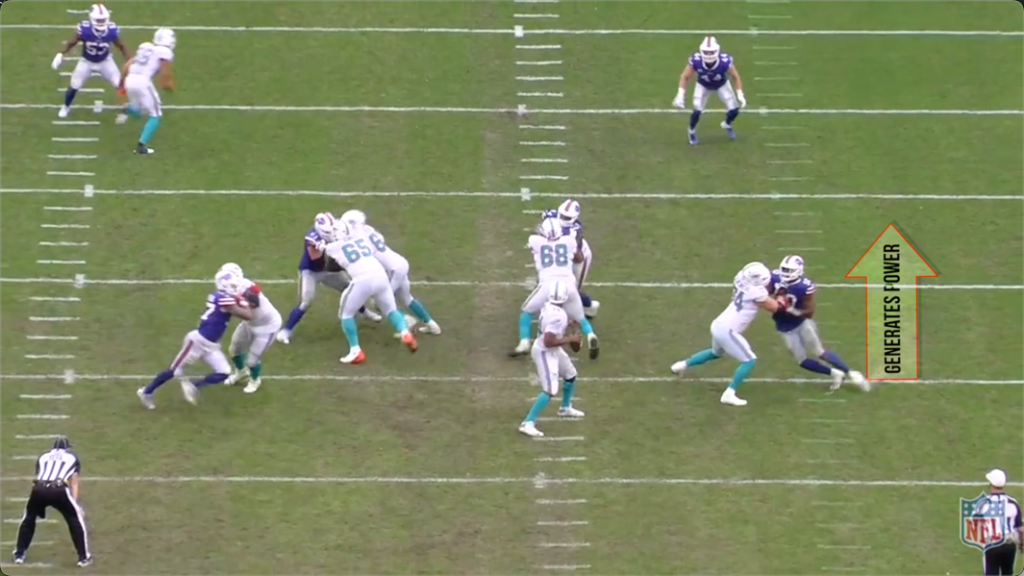 Then incorporates some of his hand-technique, which if there is one thing he excelled at, it was his hand usage as a rusher. It will pop up several times in this breakdown. 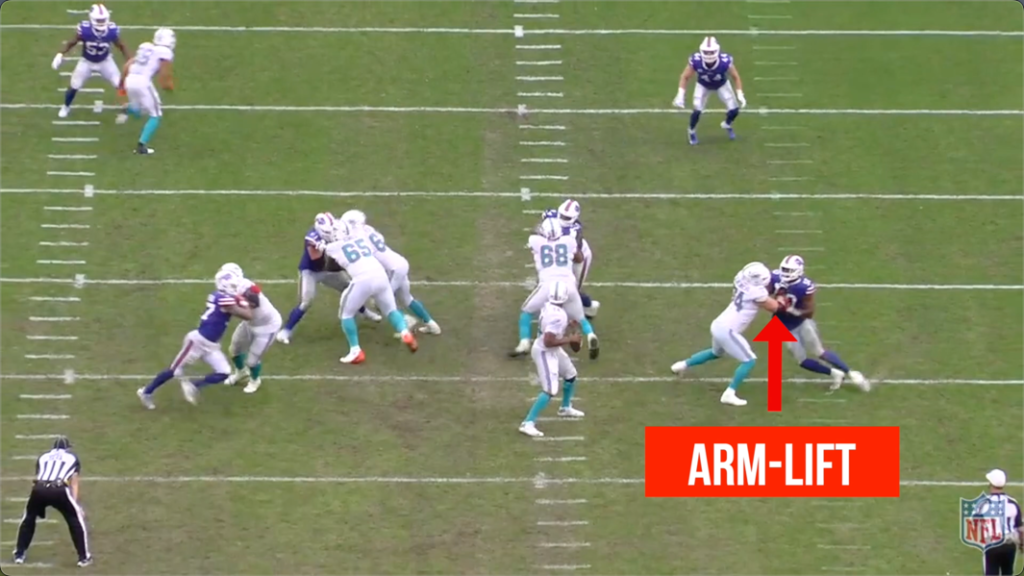 The arm lift and power he was able to generate allowed him to get up under the pads of the tackle and then he is able to drive the tackle back to collapse the pocket.

But for a majority of the season, he relied on this pass rush plan far too often. So tackles would sit back, absorb the blow and not have to really worry about a counter. Especially because Rousseau and his teammates were routinely late off of the ball. Limited pass rush plans and counters along with being late off of the ball weren’t putting Rousseau on the QB’s doorstep often enough.

It also seemed like Rousseau hit a wall in the third quarter of the season, specifically from a pass-rushing perspective. Leslie Frazier had a couple of meetings with the young pass rushers to discuss the “rookie wall.” Frazier told the media during the season that it “is a long season compared to what those guys have experienced in college,’, especially for Rousseau who had opted out in college due to Covid. Frazier went on to state that “it can get to a point where you’re looking and saying, ‘Man, when is this thing gonna end?’ And it can affect your play.”  Rousseau was consistently making plays against the run, but barely making an impact as a pass rusher. This is why the Bills began to cycle Jerry Hughes and Boogie Basham in on passing downs. 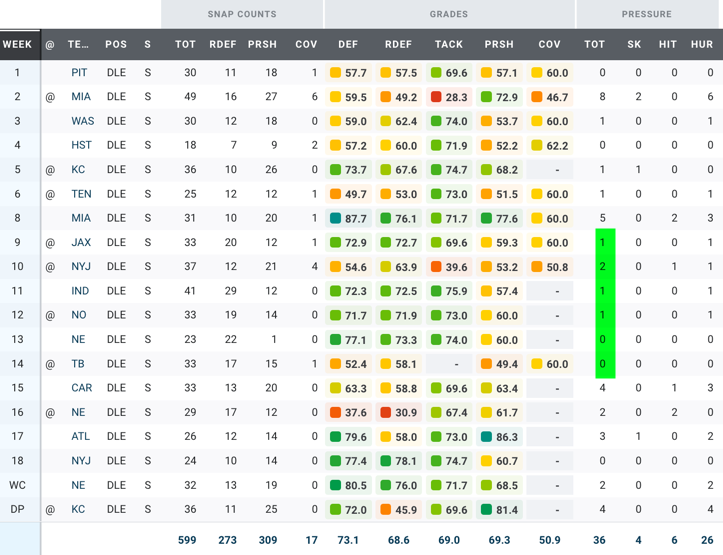 Rousseau continued to work on the little things that would help him work through that “rookie wall.” He continued to take care of his body, study film, and work on winning his one-on-ones, and it seemed by the time he hit the Atlanta game in Week 17 he regained some of that early season playmaking ability. On film, it appeared like he began to change up his approach as a pass rusher. Rousseau didn’t always focus on getting first contact, he let the game come to him. On this strip-sack by Rousseau, the right tackle Kaleb McGary is aggressive. He Jump-Sets Rousseau, which doesn’t give the pass rusher much opportunity to dive into his bag of tricks. McGary lands first touch so Rousseau attempts to use a Power-Swipe but the counter doesn’t work because McGary has a hold of Rousseau’s facemask. 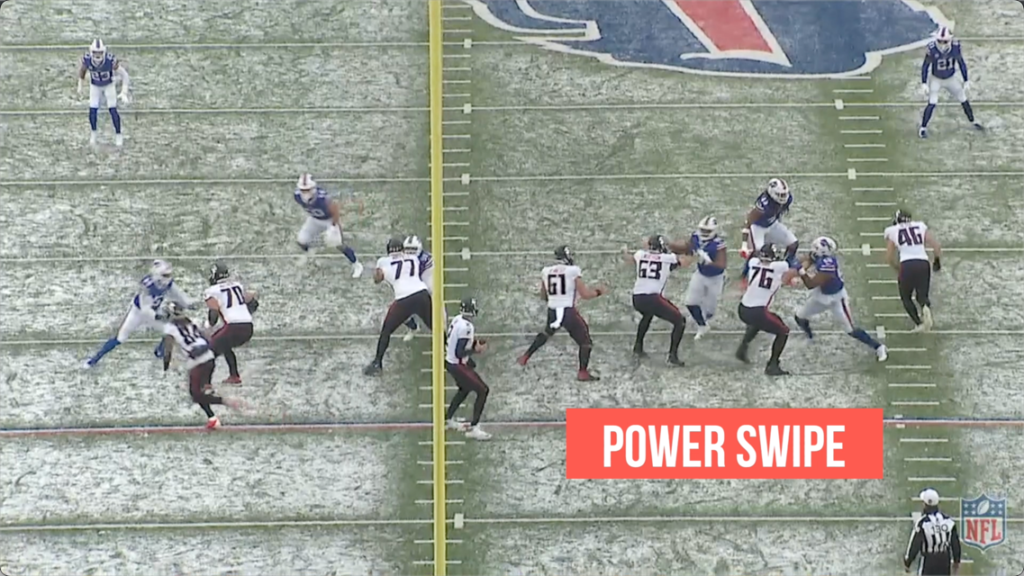 Rousseau then transitions to an Arm-over move which helps him Pin McGary’s arm in place. With McGary pinned in place, Rousseau then Carioca Rushes by the tackle. So he is essentially runs sideways upfield beyond McGary. 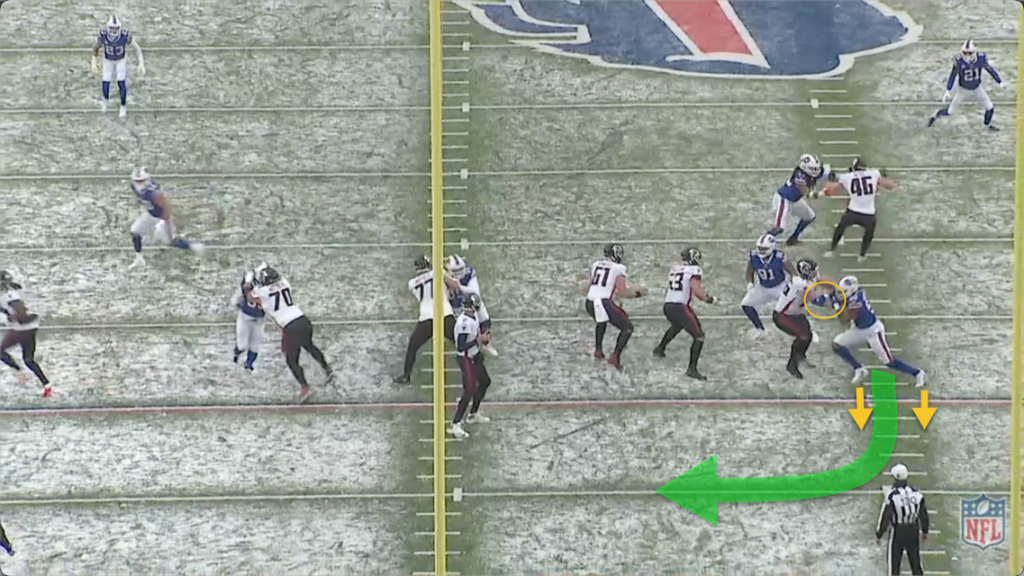 Once past the hands of McGary, Rousseau propelled himself towards Matt Ryan and chases him down and forces the fumble.

It was nice to see Rousseau change the speed of his rushes, sometimes causing the offensive linemen to shoot their hands which would put them in a vulnerable position. Rousseau would then work in his savvy hand usage to counter and then transition to power.

As a pass rusher, his ability to control the arms, hands or wrists of offensive linemen was so much fun to watch. It allowed him to open the door of tackles, but he has to do a better job of then finishing.

Rousseau’s ability to win first touch and then transition from speed to power will always be his ace up his sleeve.

But like Rousseau told the media, “good players aren’t good players because of their athleticism only.” The young defender will have to work on anticipating the snap better because that alone will help stress the athleticism of offensive tackles. It may allow him to threaten the outside hip of tackles. That will force tackles to kick slide quicker and wider which will make linemen susceptible to Rousseau’s power moves.

I thought that Rousseau varied up his pass rush plan a bit late in the season. While his arsenal was somewhat limited, it became more effective because it forced linemen to have to think rather than just having to worry about how to absorb Rousseau’s power moves.

Rousseau was an elite run defender on early downs and it earned him plenty of playing time, but I believe that he learned a lot about his pass rush abilities late in the year. Those reps and with the mentorship of Von Miller, I expect Rousseau to take pass rush acumen to another level in 2022.