The Buffalo Bills faced off with the Indianapolis Colts in Week 1 of the 2022 NFL preseason, earning a last-minute 27-24 victory. Bills fans have been so hungry for their team that they are deep diving into the routes of WR6. It’s only preseason, and we can’t get enough. To feed that appetite, let’s look at a defensive play Buffalo ran against Indianapolis midway through the third quarter.

The Bills got the Colts into a long third down attempt. This is a money down – a get off the field and force a long field goal try down. This is an opportunity to confuse the quarterback, generate atypical pressure, and hopefully, force a mistake.

At this point, Buffalo was trailing 10-7 and both teams had second and third string players on the field, so the talent level should be approximate, meaning we can reasonably evaluate the play design without the caveat of, “Well, their All-Pro G simply destroyed the Bills’ UDFA DT.”

In this image, the Bills are in a 4-2-5 (4 DL, 2 LB, 5 DB), which is typical for them. Buffalo’s ends are out in Wide 9 alignments (yellow circles), which is unusual for them. Typically, the Bills’ DEs are aligned at 7, which is just on the outside shoulder of the T. The first wrinkle they are showing is in the DL formation. 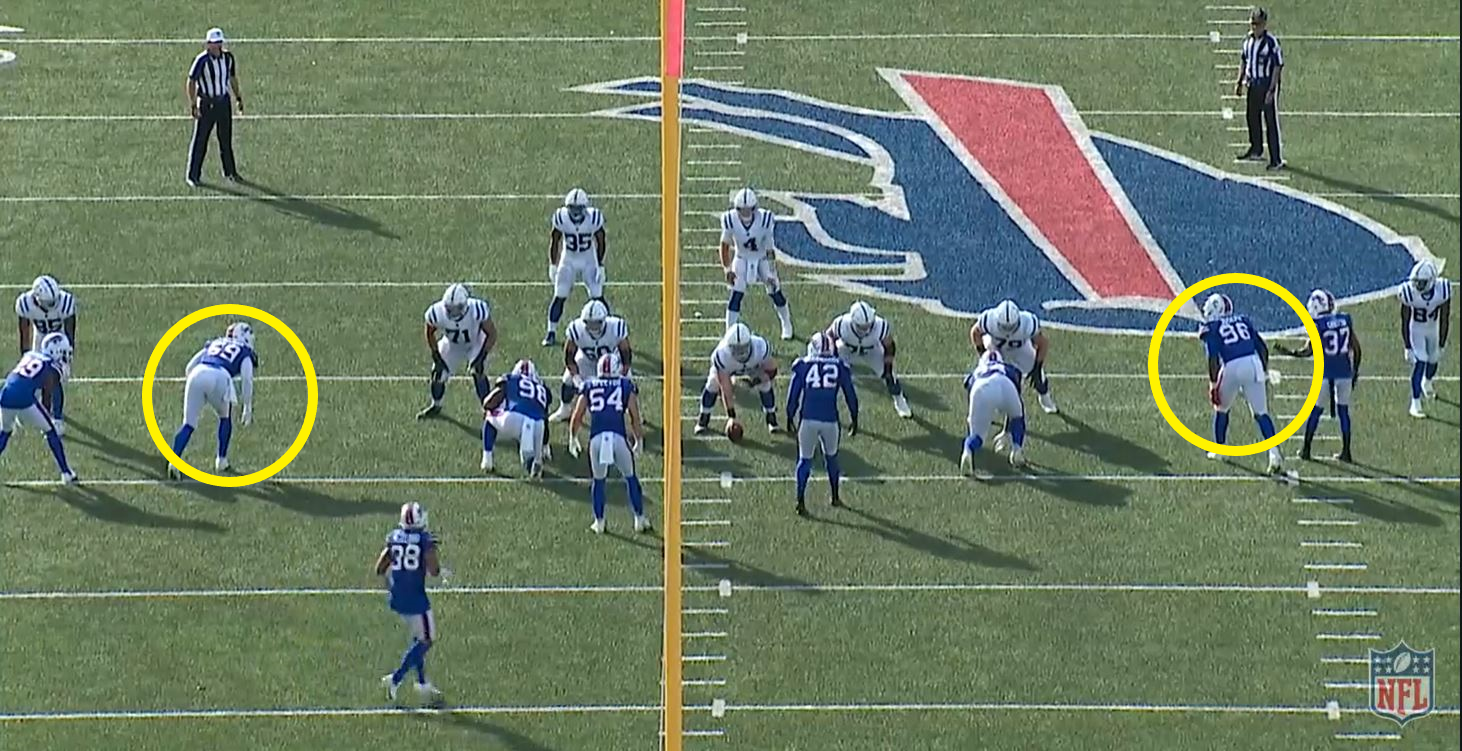 Joe Giles-Harris (42) is at MLB up close to the line of scrimmage, mugging the A gap to the C’s left. DB Olijah Griffen (37) is also up tight to the LOS. 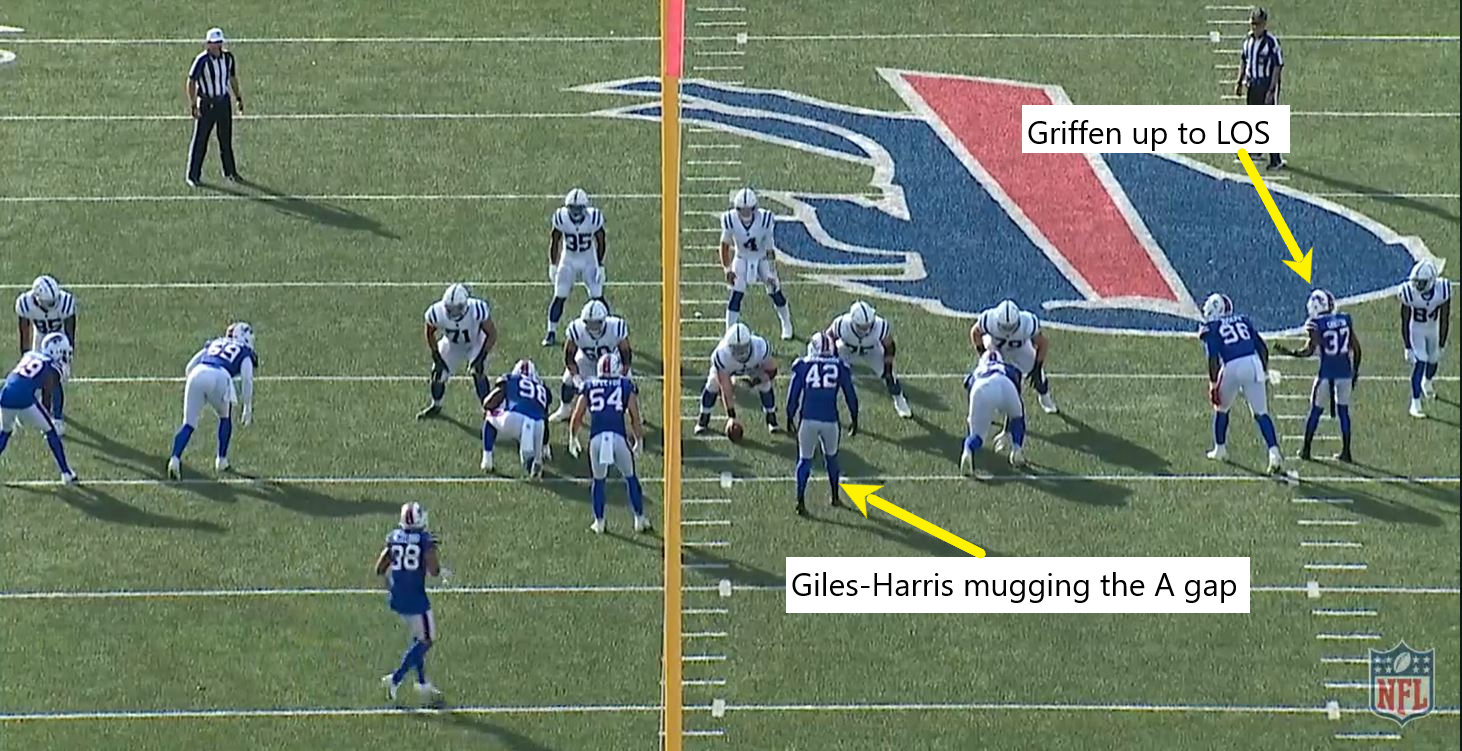 It isn’t possible to see in still images, but Griffen is bouncing and twitching around, looking like he’s ready to rush. These actions give the impression that those two players are intending to bring extra pressure at Colts’ QB Sam Ehlinger. 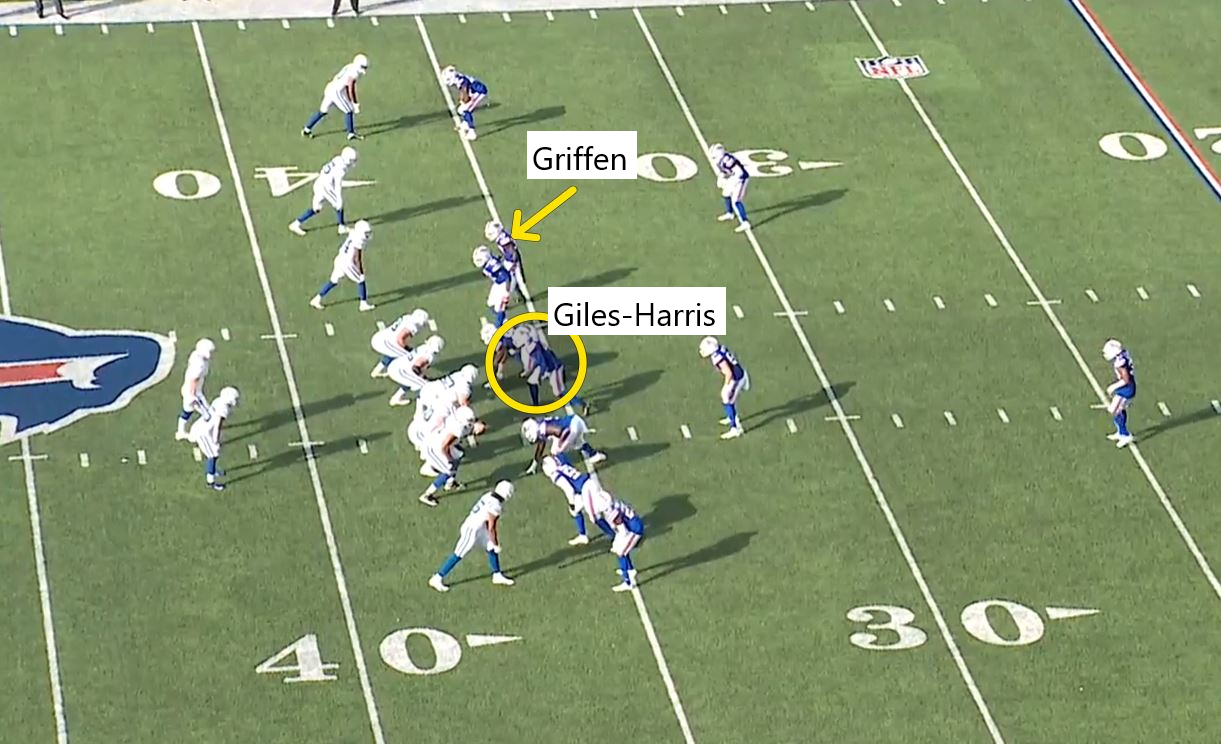 But with about 7 seconds left on the play clock, Giles-Harris backs out and Griffen does as well, just not as deeply. Everyone else is pretty well static, except for Nick McCloud (38), who is coming up and out to cover Tim Harris (29) at corner. 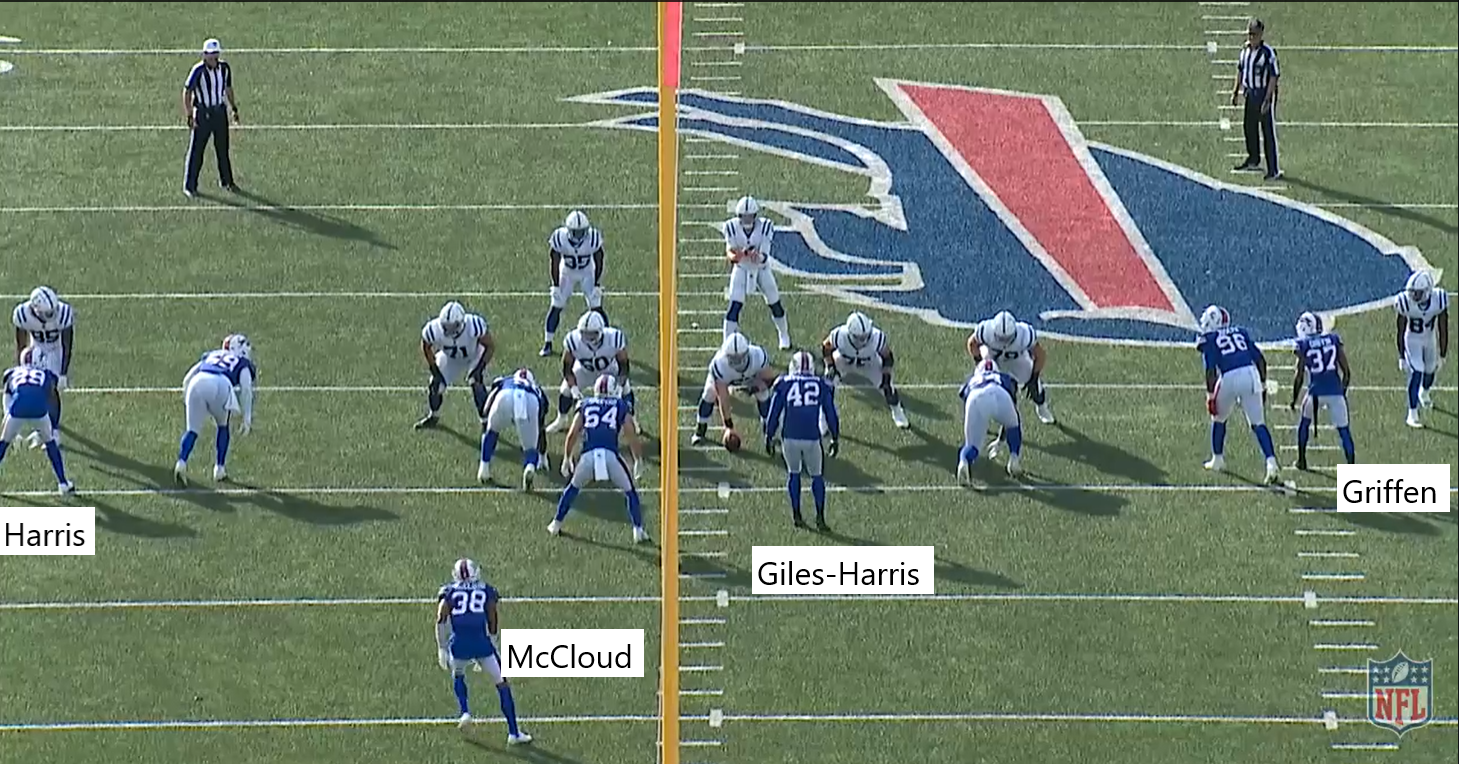 Why point out McCloud’s movement?

It’s too early and becomes an indicator for Indy’s RT. McCloud capping Harris means he has moved out wide to replace Harris in coverage scheme after Harris rushes, and it tells the RT that Harris is coming. If McCloud moves later in the play clock, then the Colts do not have time to adjust. 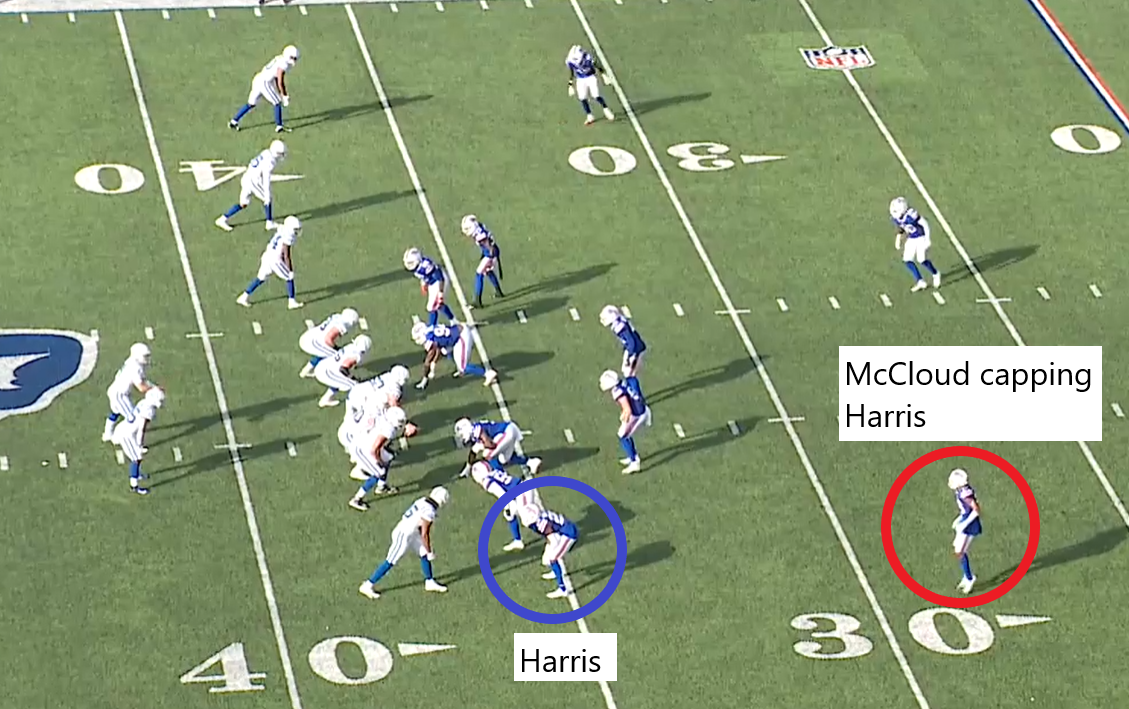 With five seconds left on the play clock, the RT points out to Harris. This triggers an alert to the RG because, as we’ll see, he completely focuses on Harris. 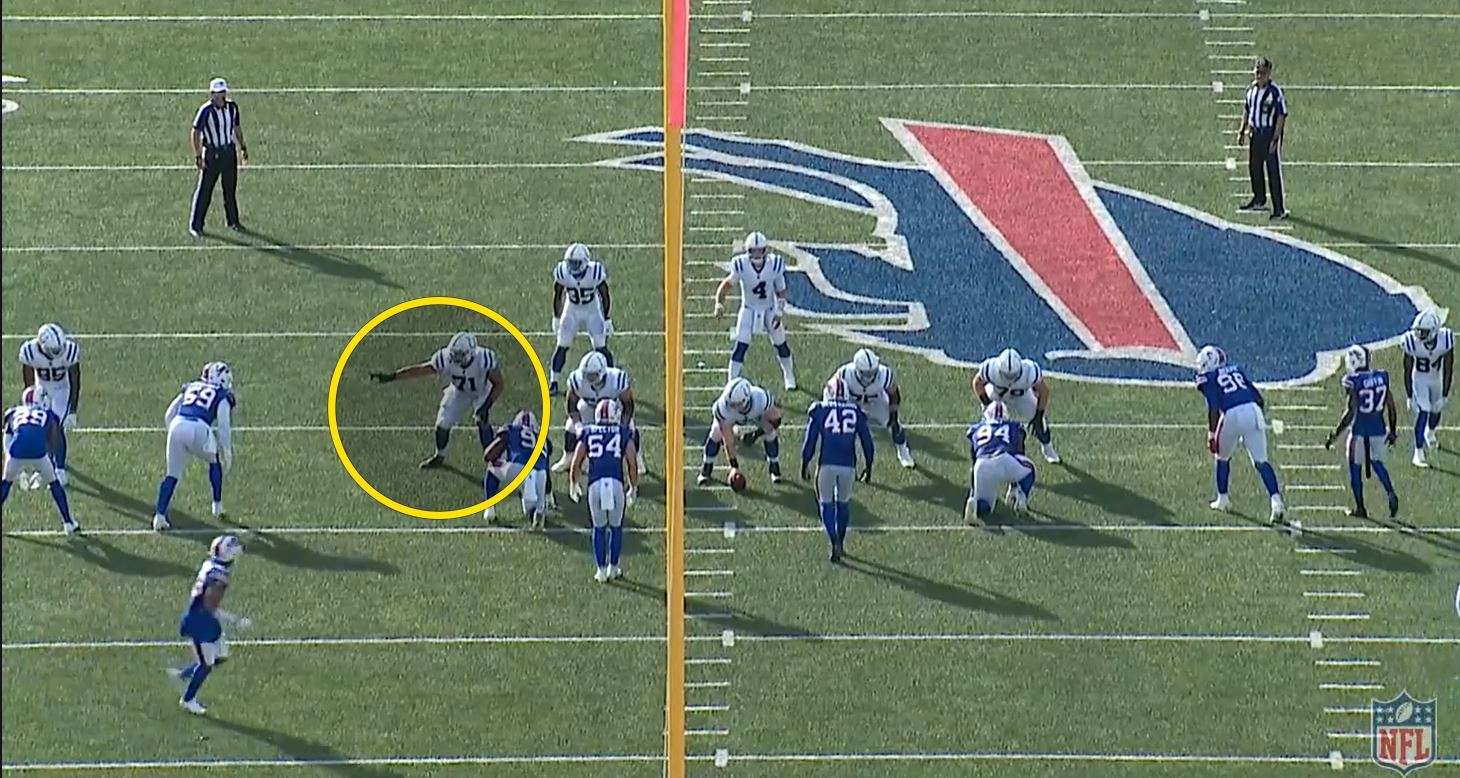 At the snap, the RG has already turned his attention to Harris (yellow arrow). Harris immediately starts to head to his right and loops around (blue circle) Kingsley Jonathan (59) at DE. That pressure look from Giles-Harris and Griffen? Smokescreen. Both players drop off, and even Prince Emili (96), the DE on Griffen’s side, slides back into a shallow zone. The pressure that appeared to be coming from Ehlinger’s left doesn’t materialize. But Baylon Spector (54) has started his rush. 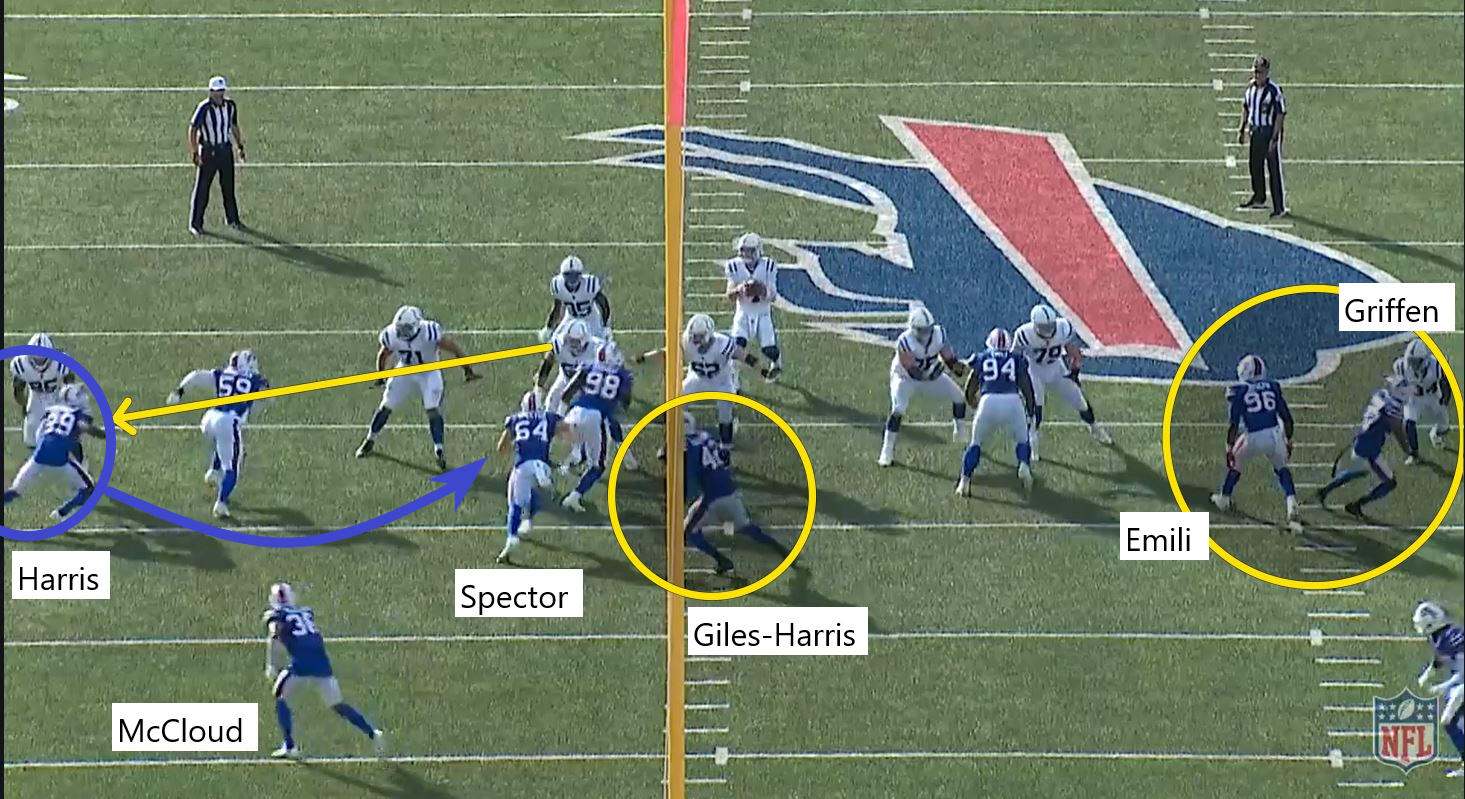 The Colts’ RG is either entirely committed to Harris to the point he never sees Spector, or he believes Spector is someone else’s responsibility. He doesn’t consider Spector at all as he runs right past him. That second option is the more likely scenario, but the center is engaged with CJ Brewer (98). who spiked inside and the RB has chosen to help chip on Jonathan. 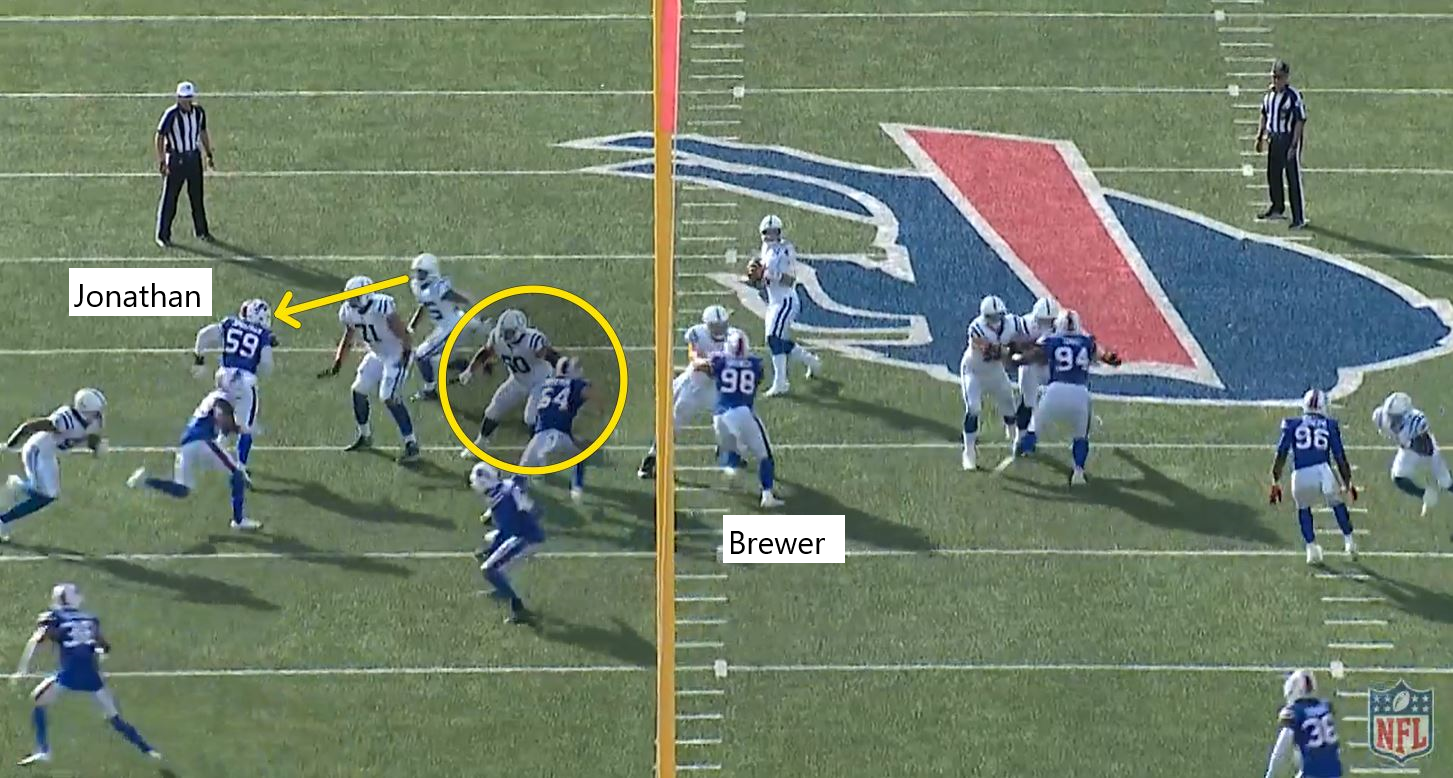 The right tackle was correct – Harris was rushing, and the guard does a solid job of sealing it off. However…no one in the protection scheme has accounted for Spector, and he has an open highway, a full tank of gas, and a case of Slim Jims in the passenger seat: he’s ready to go. 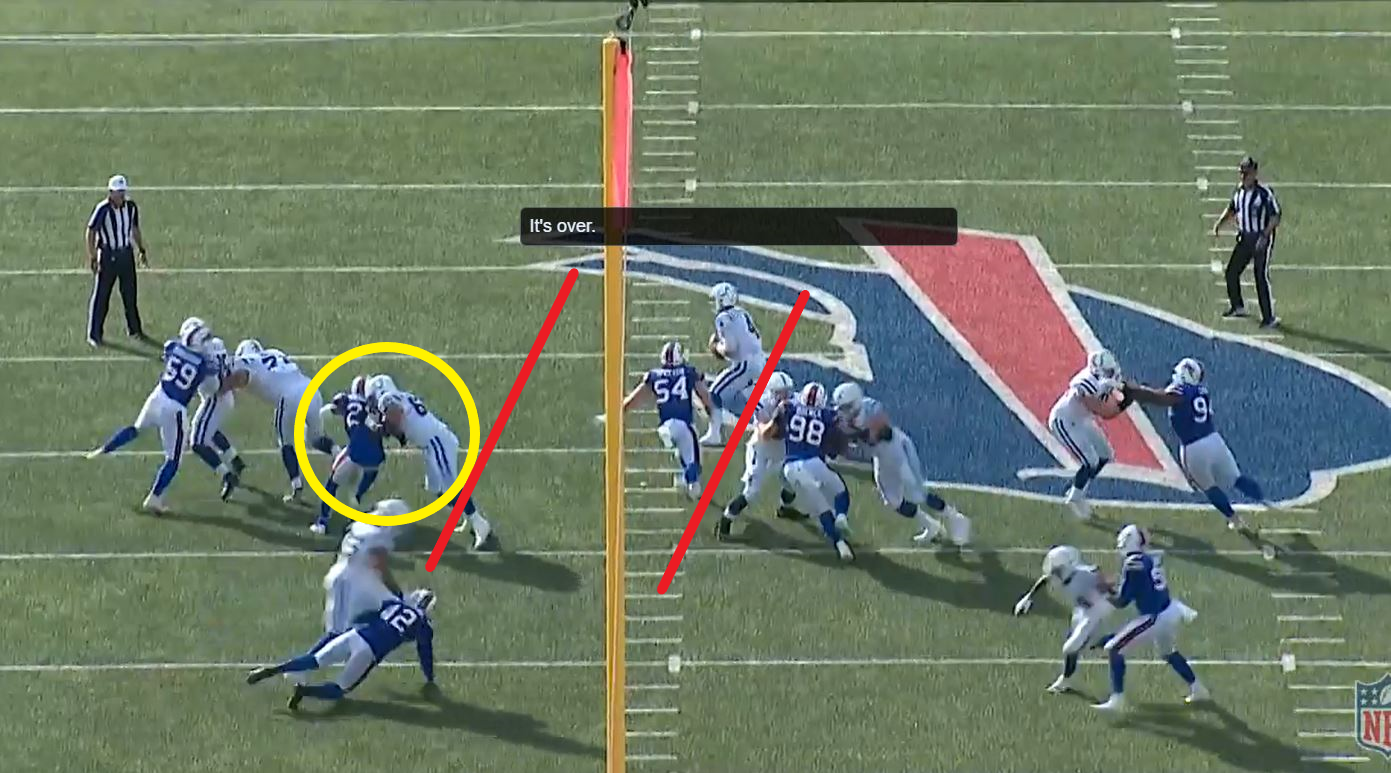 The pre-snap simulated pressure from Giles-Harris and Griffen may have affected Ehlinger’s approach early in the down, causing him to miss the unblocked rush from Spector. It’s also hard to say why the RB chose to chip Jonathan instead of reading the rush for even a beat. However, the main takeaway is that on 3rd & 9, when down in the 3Q, the Bills’ D called for a play that disguised its intentions and generated enough confusion to force the opponent into a costly error.