The Buffalo Bills are 5-1 entering the Bye Week but the season is far from over. With 11 weeks left to go there is a lot of work left for Buffalo as they pace towards the #1 seed in the AFC. With each of these games comes a unique set of burning questions as well as differing levels of importance. Below we dive into just that with a quick preview of each game and a ranking from 👏 (Least Important) to 👏👏👏👏👏 (Most Important) on just how important each game is.

The Bills exit their Bye Week set to host a beleaguered Packers team in Buffalo. This is the same Bills squad that is 5-0 under Sean McDermott after the bye and a Packers team that is 0-6 in their franchise’s history in Buffalo. Don’t get it twisted though, Green Bay is stacked with talent including 8 players that have been selected to the Pro Bowl and 4 players that have been named All-Pro. Still Buffalo can, and should, win this game but can you ever really count out a team Quarterbacked by Aaron Rodgers? 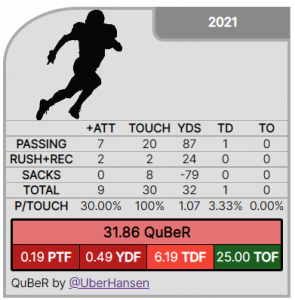 The Bills head to New Jersey to take on a Jets team that is playing well above expectations. Robert Saleh has his defense playing fast and physical consistently keeping his team in games. but the offense remains a major concern. Let’s not forget that in the 2021 Season finale Zach Wilson posted a QuBeR of just 31.86 against the Bills. To be fair it’s possible that the additions of players like Breece Hall (RB) and Garrett Wilson (WR) will make it easier on Wilson but are the Jets improved enough to compete with a team like Buffalo?

It’s possible the most difficult remaining game on the Bills schedule will take place when the Vikings head to Buffalo. Entering this game though, expect the majority of coverage to be about Stefon Diggs versus Justin Jefferson. One of the more even trades in NFL history has seen Diggs produce 279 Receptions, 3417 Yards, and 24 Touchdowns for the Bills while Jefferson has 242 Receptions, 3689 Yards, and 20 Touchdowns for the Vikings. #1 to #52 on each team’s roster is closer talent wise than many realize but with the discrepancy at #53, the Quarterback, how close are these teams really?

The Browns come to Buffalo as 1 of the 7 teams that the Josh Allen-led Bills have yet to beat. Their defense is among the league’s elite while their offense runs through the talented duo of Nick Chubb and Kareem Hunt. The problem for Cleveland is that their presumptive franchise Quarterback is suspended until Week #13 and this game takes place in Week #11. The question becomes, if this game is anything more than a defensive battle can Browns Quarterback Jacoby Brissett outshoot Bills Quarterback Josh Allen?

Another Thanksgiving brings another Turkey Day game for Buffalo, this time against the Detroit Lions. This is a Lions team with a surprisingly potent offense, featuring D’Andre Swift and Amon-Ra St. Brown, but their defense is historically bad. If Josh Allen can lead his Bills over said Lions he will become the first Quarterback in NFL history to achieve the Turkey Day Turkey, winning a game in all 3 time slots on Thanksgiving. Can Detroit make this a game or will they continue to be, in the words of  Adam Schein, the “rebuilding since 1957” Detroit Lions?

For the second straight season, the Bills will play the Patriots in Primetime following Thanksgiving, this time on Thursday night. Since the Bills became Kings of the East in 2020 they are 4-1 against the Patriots outscoring them 152-82. Those games were started by Cam Newton and Mac Jones but this time around Buffalo may go up against New England’s best Quarterback since Tom Brady…Bailey Zappe. Assume for a second that Matt Patricia can put Zappe in a position to succeed against the Bills, can Bill Belichick finally find a way to slow down his kryptonite, Josh Allen?

In the second meetup of the season the Jets come to Buffalo to close out the season series. In the past three seasons the Jets have struggled in Buffalo with their last win coming in the 2019 season finale. Don’t forget in that game Josh Allen played only four more snaps on offense (7) than Isaiah McKenzie played on defense (3). The overall importance of this game remains to be seen but division games should never be taken lightly. Assuming the Bills take care of business at home against the J-E-T-E JETE, JETE, JETE we will be left to wonder, how close are the Bills to locking down their third straight AFC East title?

It may be 100 degrees cooler when the Dolphins come to Buffalo than it was when the Bills went to Miami. The result of this game has a chance to go a long way in deciding who wins the AFC East in 2022, assuming Miami maintains pace. To this point in time though, Tua Tagovailoa has just 2 Passing Touchdowns against the Bills which is the same number of Rushing Touchdowns that Antonio Williams has against the Dolphins (2). The last time the Dolphins swept the Bills was 2016, what are the chances they do it again in 2022?

The Bills head to Chicago on Christmas Eve to take on the talent devoid Bears. The spread of this game is going to be a massive one but likely won’t touch the +28 point line the Broncos got over the Jaguars in 2013. The Bears have no real area of advantage over the Bills so this one has a chance to get ugly quickly. Expect that, but in the words of the great Bert Bell, “Any Given Sunday”, you have to give the Bears a chance, but what are the odds they can pull out a shocking victory here?

Bills @ Bengals is the biggest non-divisional game left on the Bills schedule. Heading into the Bye Week Buffalo has a 1 game lead on all their AFC counterparts and has beaten the other 3 division leaders. The result of this is an effective 1.5 game lead for the #1 seed in the AFC but if one team is lurking, it’s the Bengals. Uber talented, the Bengals have a path to not only win the AFC North but chase down the Bills with this game being the culmination of a season long journey. Will the Bengals be right there with the Bills and if so, could this game be a preview of a bigger one to take place later in January?

The 2022 season finale sees the Bills host the Patriots in Buffalo in what will be a game chock full of meaning or completely lacking of any. If the Bills aren’t locked into seeding, let alone the division win, expect them to send everything they have at the Patriots. If the Bills are locked into seeding, especially the #1 seed, you have to wonder just how much play Bills stars will get. Consider this though, if the Bills have the #1 seed clinched going into Week #18 that puts the time between their Week #17 game and their first playoff game at about 3 weeks. If your Sean McDermott do your rest your starters in this game and risk the rust that a near one month layoff could create?

Our first UNcovered clinic of the year will be "Self-Scouting" the issues the Bills have had in the Red Zone.

Find out what it's all about below! https://t.co/MRgcfUogWS

Lifelong Bills fan who's obsession reached a new level in the past decade. Began writing about the Bills in 2019 and since then have produced more than 125 Articles. Lover of statistics and leverages Software Engineering skills to manipulate data and create 'applications' for Bills Mafia!