Week 4 of the 2022 NFL season is here, and the Buffalo Bills have a potential playoff preview against the Baltimore Ravens on tap. Both teams are battling injuries and have losses-that-should-have-been-wins against the Dolphins on their records. The teams could face serious rain issues on Sunday, but we’re not so old that we’re going to talk about the weather for hours on end. We are talking money. The free kind, and how you can get it.

Three Props and a Cloud of Dust was 2-1 last week. We saw Singletary and Waddle crush their receiving yard totals, and if Josh Allen connects with Isaiah McKenzie in the fourth quarter, we’re 3-0. As much as this curmudgeon will hold onto bad beats, we look forward because there is money to win this week. Let’s get that analysis money.

Injuries are unfortunately a huge factor for both teams. The Ravens will be minus at least Justin Houston, Michael Pierce, and Tyus Bowser on defense and will probably still be without LT Ronnie Stanley. The Bills? Well, let’s just leave this here.

Hopefully, some of these names will be back on the field – particularly Poyer, Morse, and Oliver – but the Bills will be shorthanded no matter what on Sunday. The injuries in this game, especially for the Bills, make handicapping it difficult. There is not a Dawson Knox receptions or yards prop below because of his questionable status, but if he plays, I’d play the o2.5 receptions even though the juice is heavy (around -150).

This is not the same style of Ravens team to which you’re accustomed. If I told you the Ravens rank first and nineteenth in either pass or rush DVOA, for the last few years we all would have known which was which. Those numbers are flipped this year, and the Ravens are far and away the best passing team in the NFL by DVOA. Baltimore’s Pass DVOA in 2022 is 79.0%. Second place is the Jaguars (!) at 56.7%. Yes, the world is off its axis.

The Ravens’ success passing so far this year, combined with the weather forecast, significantly impacts our game script this week. The current forecast expects rain in Baltimore associated with Hurricane Ian. The long-range hourly forecast predicts a break in the rain around game time, but the field will still be saturated. Ultimately, because defense is reactionary, a slippery field favors offenses.

Also, don’t expect this year’s crew from Charm City to suddenly revert to their running ways. Sports Info Solutions tracks a metric they call Boom or Bust plays. A Boom play results in more than 1.0 Expected Points Added (EPA) for the offense. A Busted play generates -1.0 EPA for the offense. The Bills’ D leads the league in “Busted” run plays at 14.5%  and allows Boom runs at the 10th lowest rate (6.5%). In other words, the Bills don’t give up big runs and they turn rushes into negative plays for the opposing offense at the best rate in the league. Bills Mafia has watched the McDermott/Frazier defense corral the Ravens’ run game before, and it’s not a stretch to presume Baltimore will continue to rely on their new-found pass offense.

If our weather prediction is correct, that field will also benefit the Bills. The Ravens’ defense has struggled against 11 personnel (1 RB, 1 TE), which the Bills have run 67.8% of the time so far this season. In pass defense vs 11 personnel (104 attempts), the Ravens are

If you’re waiting for the Bills to become more balanced on offense, this week will frustrate you. Watch for the field conditions to slow things down, but for each offense to throw more than wet conditions would suggest.

*Odds and lines are consistently changing. These bets may be different when you visit your books.

Through Week 3, the Bills have one of the best defenses in the NFL against TEs. They are first in QBR Against (43.1) and EPA allowed (-10.18). They are fifth in yards allowed per attempt at 4.6 and sixth best at yards per game with 29.0, and they allowed the fourth lowest percentage of Boom plays to TEs (10.5%). All of these numbers are great, but let’s check the list of starting TEs the Bills have played against.

Tyler Higbee is easily the best of the group, and the Rams rank seventh for targets to TEs (24). The Titans and Dolphins rank 22nd and 29th in the same category, respectively. The Ravens rank first with 44 targets to TEs, which is 12 more than second place. Targets are far from the final indicator in terms of performance, but they speak to how involved that position group is within that particular team’s offense.

Mark Andrews is first in among NFL TEs in targets, catches, yards, intended air yards, air yards, touchdowns, first downs, and yards per route run, but he falls all the way to second for total EPA. There are a lot of volume stats in that list, but that’s the point. The Bills have not faced a TE who gets as much usage or is as important to his team’s offense as Andrews.

Andrews has had more than double-digit targets the last two weeks, leading to nine and eight catches. In the first game of the year versus the Jets, he had five receptions on seven targets. Even if the weather is bad, the Ravens’ passing game goes through Andrews.

Those stats about the Ravens against 11 personnel were intentional. They have also given up the most completions to WRs when their opponents operate out of 11. Enter the fifth most targeted WR in the NFL. Especially with Gabe Davis limited or out because of his ankle, watch Diggs get a large target share despite the Ravens’ cornerbacks being healthy. Diggs had 15 targets and 12 receptions when Davis missed the game against the Titans.

If Allen and Diggs start hitting this Rodgers-to-Adams mind meld shit consistently — and they already got a back-shoulder like this in Week 1 — then it's a wrap. pic.twitter.com/8L7nfCdHfz

Foolish bettors will make the same bets week after week, but that’s not what we’re doing here. This is an entirely different analysis just pointing us in the same direction, and that analysis’ name is Patrick Queen. Below are Queen’s numbers in coverage for the 2022 season. 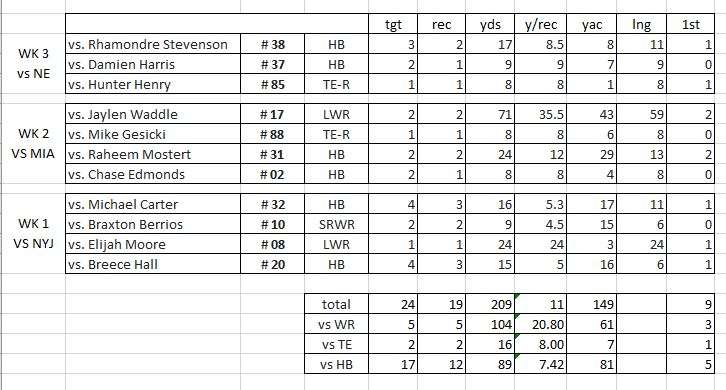 Queen is being targeted almost six times per game against RBs. It’s reasonable to expect Ken Dorsey and Josh Allen to find ways to get Singletary matched up with Queen. Just like last week, Singletary’s receiving yards number is low enough that he doesn’t even need to do anything special to go over.

Bills vs. Ravens: Top 5 Storylines to Watch in NFL Week 4

Since the weather might change and become even more inhospitable, wait until Sunday morning to make any bets. The betting numbers might change significantly with that type of news, but you don’t want to bet the over on something like Jackson’s completions if there is going to be a constant downpour. Unfortunately, you should also check the injury report.

Tail it or fade it, show me those winnings on Twitter at @LowBuffa.