The Bills are changing their approach to the WR position

The Buffalo Bills’ wide receiver group has been maligned all season long. Lack of speed, separation, consistency, or reliability has marked the group in 2018. In fact, it wasn’t all too different a year ago. Brandon Beane came from the Carolina Panthers and brought the same approach they had there: towering, possession-type targets with a wide catch radius, and with the intention of facilitating the job of their big, strong-armed QB.

The Panthers invested a first round pick in the 6’5″ Kelvin Benjamin in 2014 and a second on the 6’4″ Devin Funchess a year later. Jerricho Cotchery (6’1″) and Brenton Bersin (6’3″) were on the roster, too, with only Ted Ginn Jr. (5’11”) and Corey “Philly” Brown (5’11”) offering great speed in the group in that span. The team found success, especially in the 2015 Super Bowl season, but the running game was always the strength of those Panthers offenses. The passing game was a bit predictable, with Benjamin being the number one target and Ginn responsible for stretching the field vertically.

Beane is trying to emulate that formula in Buffalo. First, he signed Andre Holmes (6’4″) in free agency and drafted Zay Jones (6’2″) with a second-round pick. Jones fits the mold of the prototypical big slot receiver. Then, he traded Sammy Watkins away and brought in Jordan Matthews (6’3″) to replace him. Later, he added his former Panthers WR, Benjamin, into the mix. At the bottom of the roster and on the practice squad, they carried Brandon Reilly (6’1″) and Malachi Dupre (6’3″). Deonte Thompson came to the team during the season to play the Ted Ginn Jr. role and became the team’s most productive receiver, despite not playing all season long. He finished the season as the WR with the most receptions on the team with 27, tied with Jones, who played four more games. Running back LeSean McCoy and tight end Charles Clay were the team leaders in the category, with 59 and 49 receptions respectively, clearly not ideal.

As Beane was bringing the Panthers’ old strategy to Buffalo, the new Carolina brass went in a different direction. They shipped KB away and kept Funchess, the younger and faster option, to play the big target role. They added the quick and versatile running back Christian McCaffrey with a first-round pick, and he led the team with 80 receptions on the season. In the second round, speedy WR Curtis Samuel was the choice. Damiere Byrd and Russell Shepard were other smaller, quick twitch guys on the roster last year. 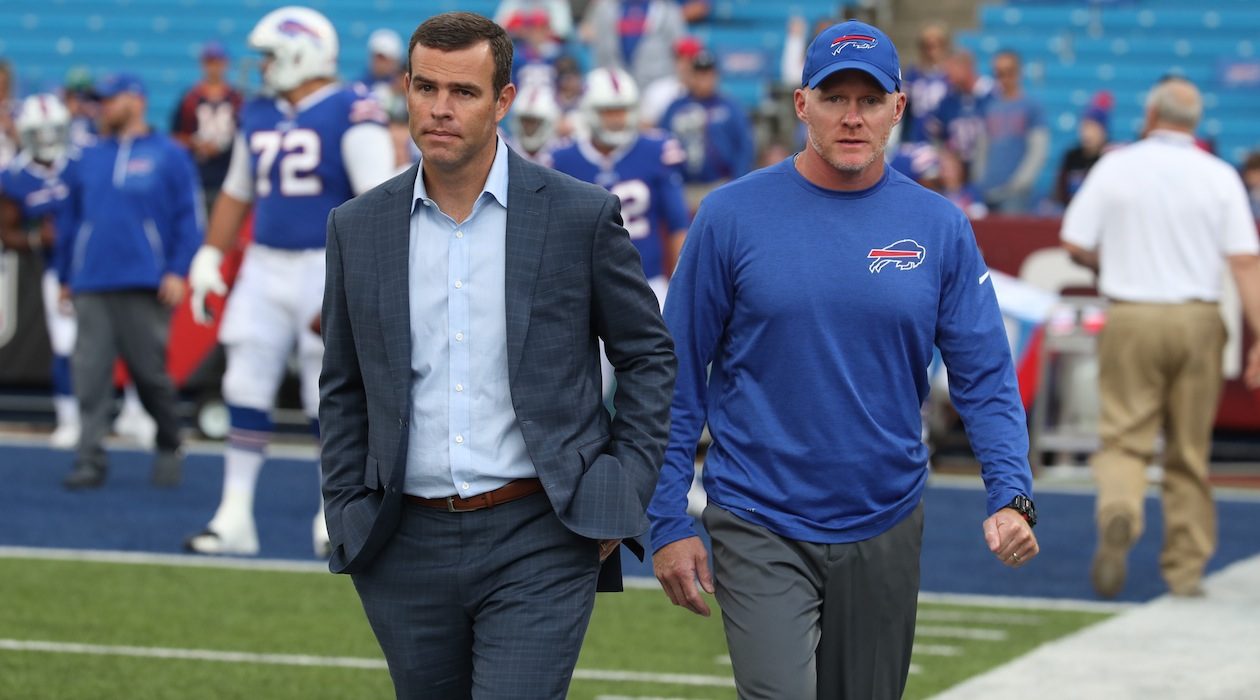 In 2018, the overhaul continued. The team kept only Funchess, Samuel and Byrd from the previous year’s group. Torrey Smith, a proven veteran deep threat, and Jarius Wright, a quick slot guy, were signed in free agency. Not satisfied, GM Marty Hurney spent another first-round pick on a dynamic offensive weapon, D.J. Moore from Maryland. The team’s roster now has only one big-bodied WR, surrounded by speed all around. The running game continues to be a strength, with a big and mobile QB, a running back who can catch, and WRs who are threats not only downfield, but also on jet sweep motions and in the screen game. The result has been great so far. With his targets gaining more separation, Cam Newton is enjoying his best season as a passer, completing 68.4% of his passes and with just a 1.8 INT% and a 102.7 QB rate, all career-best numbers.

After a historically bad start by the Bills’ offense, it looks like Beane and McDermott have stolen another page from the Panthers’ book. The head coach revealed a talk between himself and the GM about the need to insert speed into the offensive unit before the game versus the Jets.

Brandon and I talked a couple weeks ago and we thought we were lacking in the speed department on offense. That’s been an emphasis the last couple of weeks. You saw some of that against the Jets. That just opens things up a little bit, not only for the passing game, but at times, the running game. That’s not the only part of what we’re doing right now, but that’s some of what we’re trying to get on the field at this point. HC McDermott

They acted quickly, adding former Broncos wideout Isiah McKenzie to the mix and calling up Robert Foster from the practice squad. The impact was immediate. The running game started to work and the quarterback, Matt Barkley, found success, even having only been with the team for two weeks.

McKenzie was a major threat on jet sweeps, and Foster stretched the field vertically, allowing Zay Jones to work on the short and intermediate areas.

After these quick results, Beane didn’t get complacent. He cut big-bodied Terrelle Pryor and brought Deonte Thompson’s speed back to the team. More and more, it looks like Beane is following the new Panthers’ approach, having Zay Jones to play the Devin Funchess role with a lot of speedy guys around him. According to our Erik Turner, “It’ll help Josh Allen to go deep out of play-action fakes, keeping the ball outside the numbers, sort of like they used to do with Tyrod Taylor in the past.”

At this point, early in his career, Allen needs to see the receivers open to throw, and his new weapons have the speed to make the opposing secondaries respect the threat of a long ball, opening those deep comebacks and hitches, routes where Allen found most success so far.

Some of Allen's best plays have been play-action passes from the pocket. The trajectory and touch on this throw were phenomenal. Best pass all season. But I can't believe there was no call on this play!!!!https://t.co/2CqMFPf3EX pic.twitter.com/YRG8rvmq4E

It’ll be interesting to see Josh Allen working with more speed around him. He certainly has the skillset to make defenses pay if they commit mistakes against those guys. If the trend we saw against the Jets continues, then it won’t surprise me if Beane continues to follow the Panthers’ approach and spend a high draft pick, or even two, on dynamic playmakers in the 2019 NFL draft.