There was a lot of good film from the Buffalo Bills in their Week 10 matchup with the Minnesota Vikings – in the first half, at least. At the end of a beautiful drive to close the half, Gabe Davis caught a really well-thrown back shoulder TD from Josh Allen, who had a clean pocket to throw from. That drive went five plays for 71 yards in 1:22, leaving the Vikings only 0:27 in the half. We also got to see Devin Singletary’s first two rushing TDs of the season, the second of which came on a pin-and-pull run that you should recognize by now.

Motor’s first TD is our play for this week. 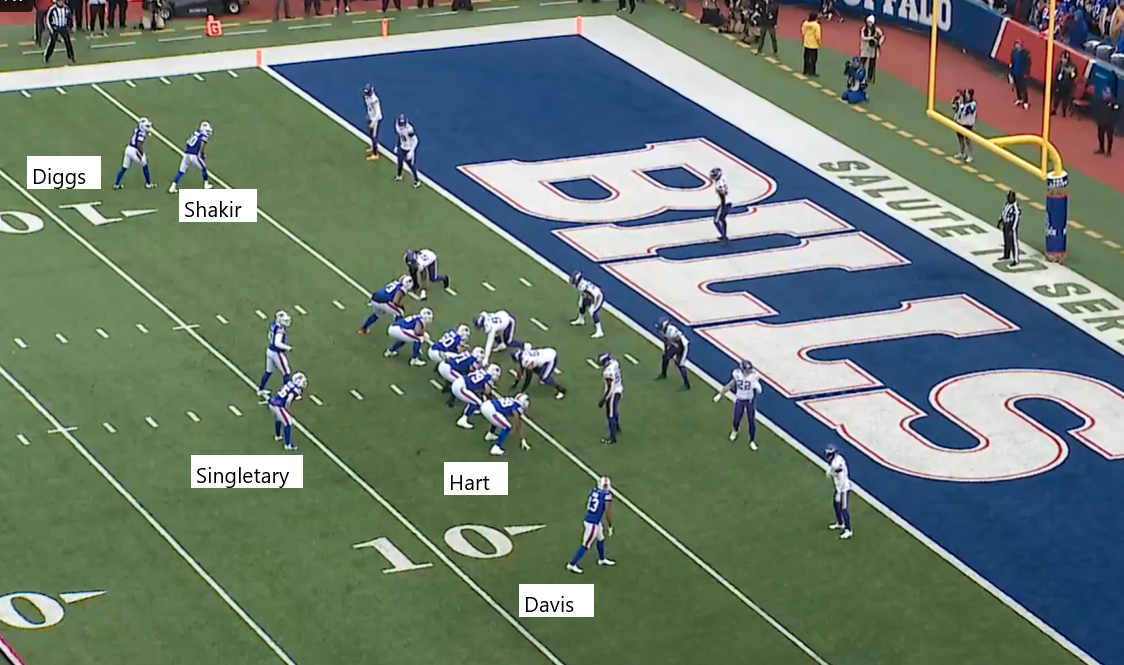 The Bills come out in a heavy set with Bobby Hart as a sixth offensive lineman. Davis is initially wide to the boundary with Diggs and Shakir stacked wide to the field, while Allen is in shotgun with Singletary to his right. Allen motions Davis in tight to Hart right before the snap.

Minnesota is in nickel with four linemen and one safety high with the other in the box.

Smith is the force player on the fringe of the box. That alignment created some problems for Brown a few times throughout the course of the game, but here Dawkins faces off with Smith. 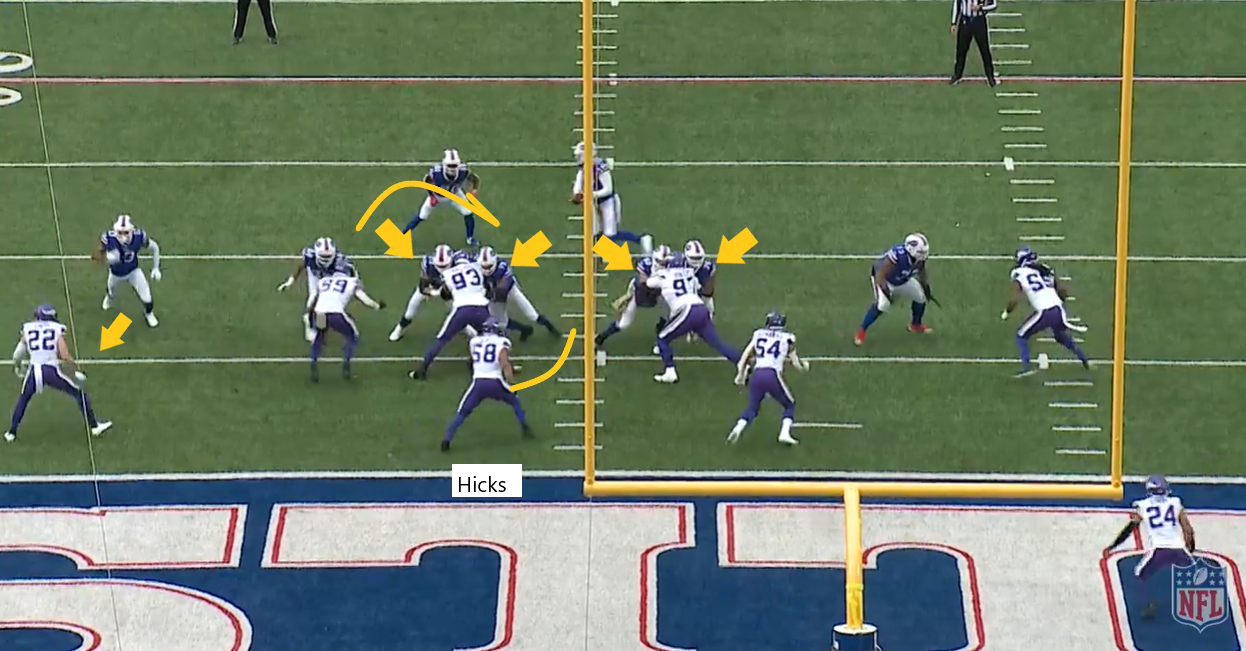 The Bills run a version of duo. The two double teams that the OL executes are where the call gets its name. Brown and Bates double Bullard, while Morse and Saffold team up on beloved Harrison Phillips. Singletary’s read is Hicks. The first intended gap is the A, but if Hicks fills that as he does in this play, Motor takes it outside.

Here’s a Coach Tube video link of Jim McNally explaining Duo against both a 3-4 and 4-3 (the second video on that page). 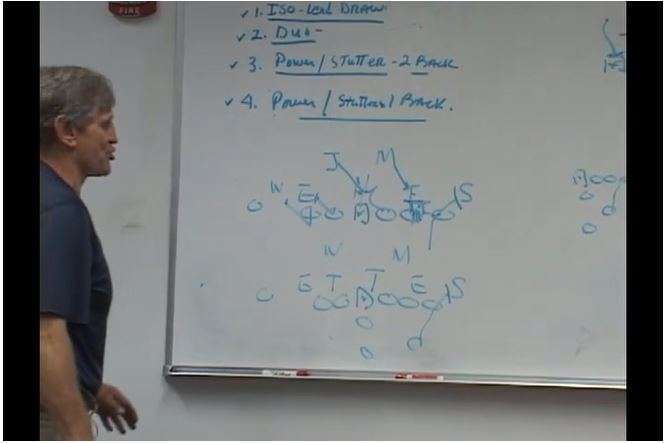 In McNally’s explanation, he talks about the FB kicking out the SAM, but in this version, the Bills use their best blocking WR, Gabe Davis, to nullify MIN S Harrison Smith. 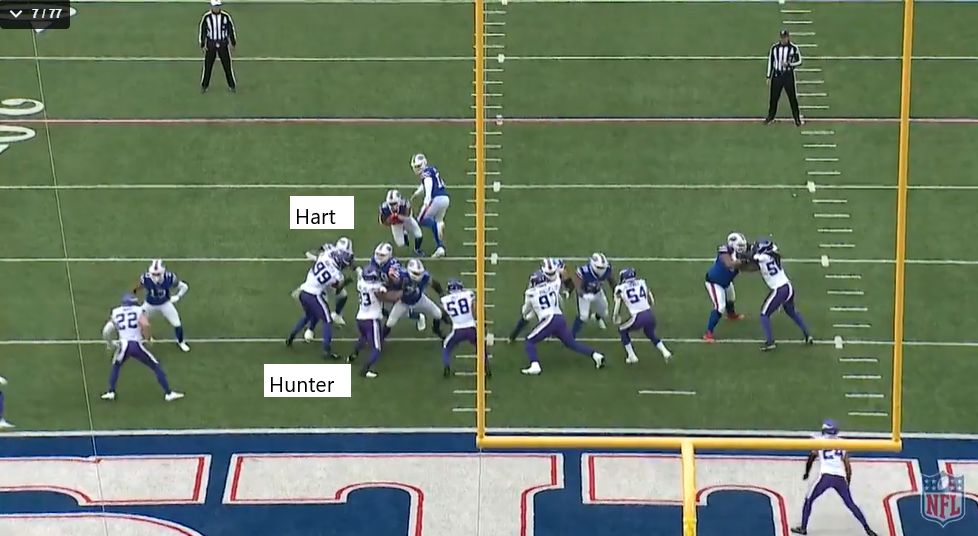 In what sounds like a nightmare-made flesh, this play leaves Bobby Hart one on one with Danielle Hunter. But Hart has been better this year (in albeit limited playing time) and he manages to get Hunter just off-balance enough for Motor to reach the edge.

Heading outside, Motor relieves Patrick Peterson’s ankles from their weary toil and then powers through Bynum to get into the endzone.

Motor was untouched until he reached the goal line, and the Bills need more successful blocking and running from players not named Josh Allen all over the field, but especially in the red zone. Per SIS, the Bills have not been good in the red zone this year, running or passing.

Josh Allen has not played well in the red zone this year. Coming into today:

-Josh Allen was 3rd amongst QBs in overall EPA

The red zone struggles are a combination of scheme, execution, and just bad luck. There are ways for the Bills to correct those issues, but no singular play type is an all-encompassing answer. The Bills ran duo later in the game with no success, but this time was effective because it was well-executed. There’s hope in that reality.