The Buffalo Bills’ victory over the New England Patriots in Week 13 of the 2022 NFL season was exceptionally satisfying in a number of ways. First, a methodical, definitive, irrefutable destruction of a divisional rival in a primetime showcase should keep you falling asleep with a smile on your face for days. Second, the Bills were sparked by rookie running back James Cook, who had 105 total yards. Twenty-eight of those yards came on one early rush. 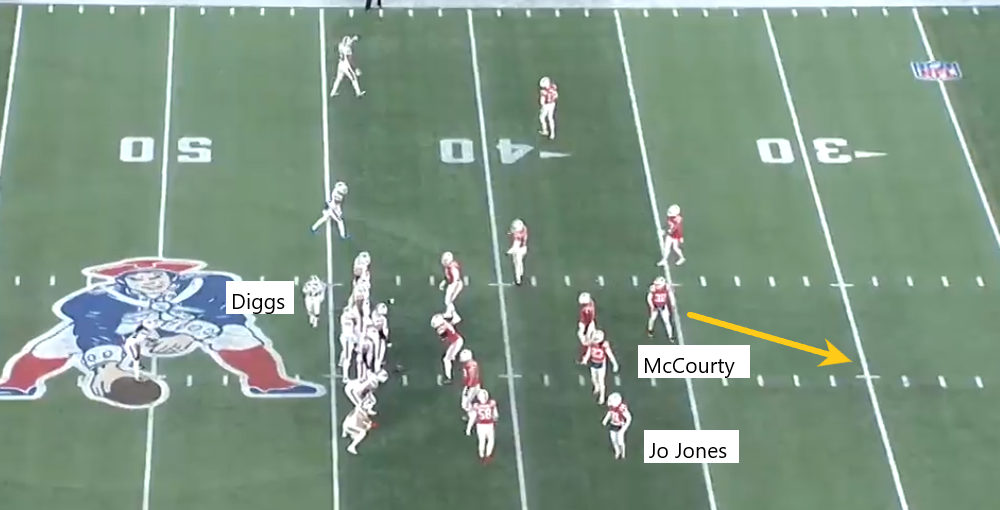 Before the Bills even get set, Diggs initially lines up to the left and then jogs to the right. As he does, Patriots’ S Devin McCourty slides down back out of the box and to the right hash into a two-high look, which the Pats do at one of the lowest rates (37%, 29th). Jonathan Jones slides over to pick up Diggs. 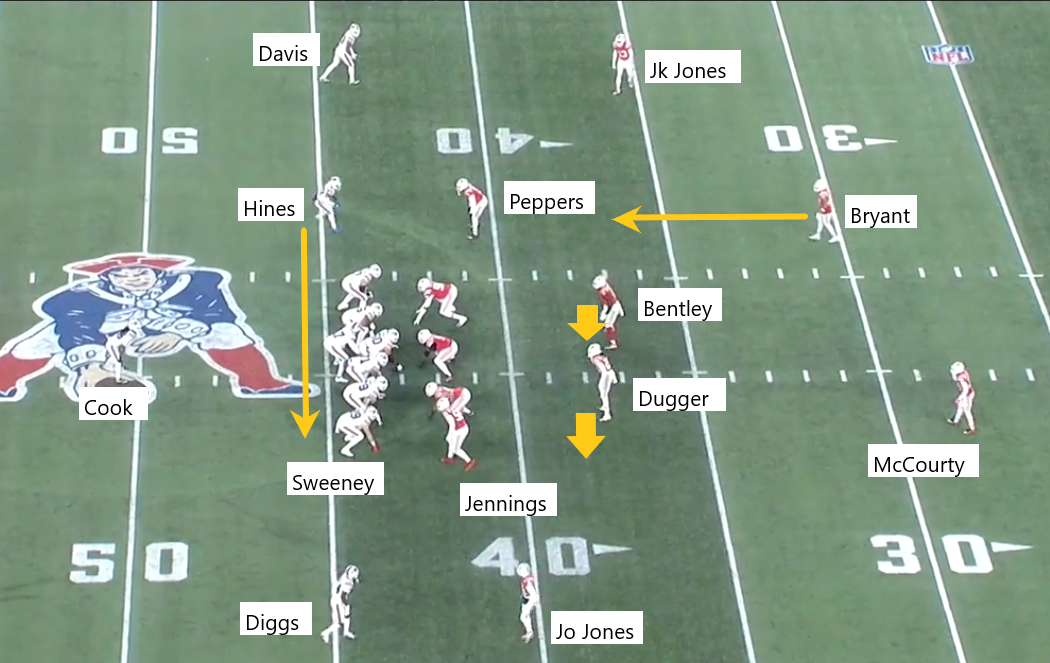 Buffalo is in 21 personnel. Allen is under center, and Cook, along with Nyheim Hines – who is in the slot – are the RBs. Tight End Tommy Sweeney is in line to the right. Davis is wide to the left and Diggs to the right. The Pats are in an over front in a 3-2-6, which might sound exotic but a 2-3-6 is their second most common defensive personnel group after a 3-3-5. Their LBs are Bentley and Jennings, who is up on the line. The safeties are Peppers, McCourty, and Dugger – who is in the box, essentially at a linebacker position. Bryant, Jack Jones, and Jonathan Jones are the CBs.

Allen calls for the snap right as Hines passes behind him for a jet action fake.

The play is set up as a Mid Zone Concept. Morse and Bates double up Godchaux. They are working on that combination block up to the linebacker Bentley.  Brown is left with Guy, but he gets a major assist from TE Tommy Sweeney. Sweeney Feed blocks Guy into Brown to help him get leverage. The blocking to the left side is less relevant because, given their alignment, Cook knows he is going to cut it back. 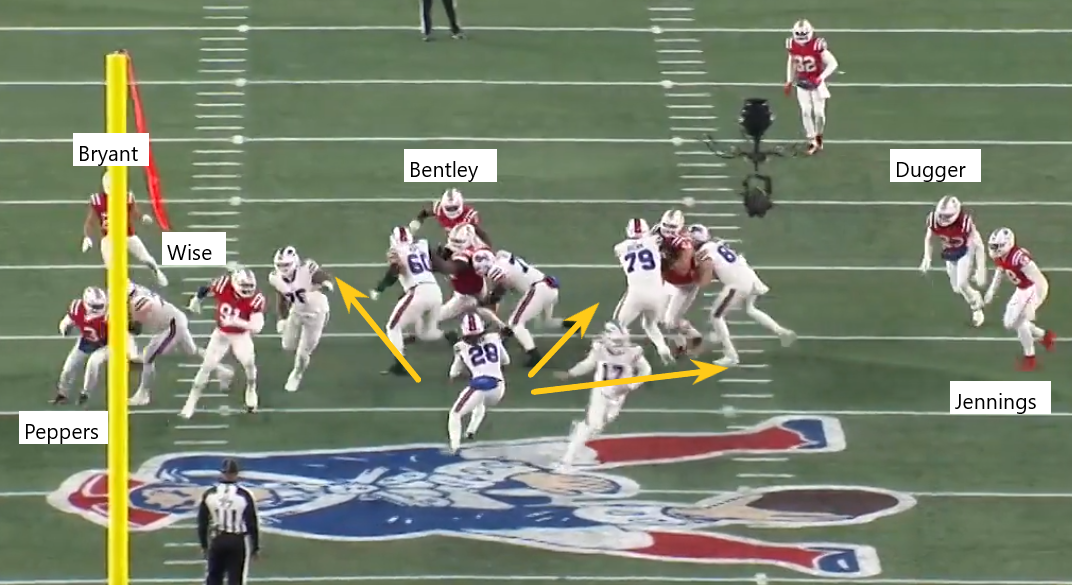 Peppers and Wise get upfield, but Morse and Bates have created enough push to create a lane. Brown has his block solid and is creating another. Morse has also started to pull off the combination block to move on to Bentley in the second level. Given the alignment and penetration to the play side (left), Cook’s eyes have rightfully taken him to the backside. 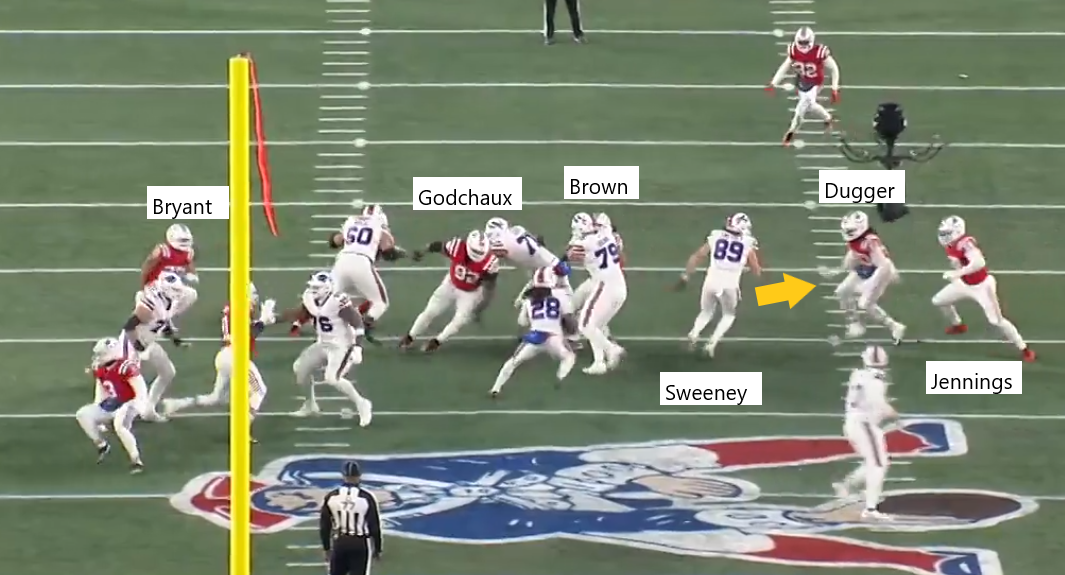 Cook gets vertical or “presses the line of scrimmage” which gives Sweeney the perfect amount of time to come off of the Feed block to peel back to seal off Dugger. 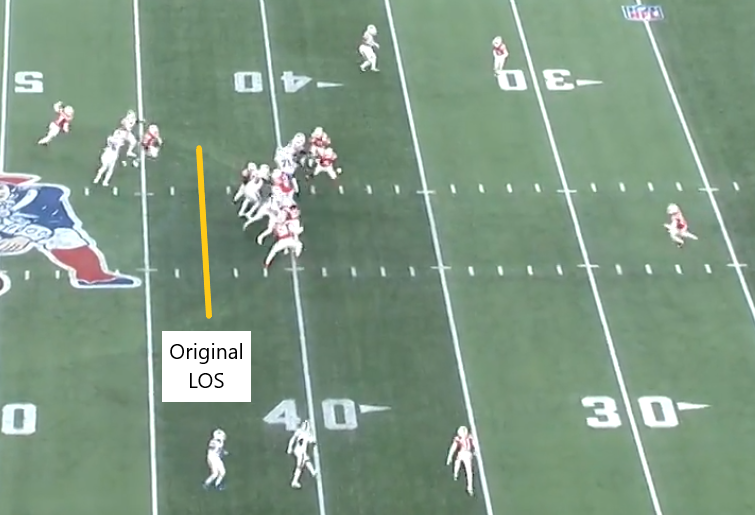 When Cook hits the line, the OL has already created close to three yards of push. Bills’ RBs have been averaging 2.9 yards before contact this season. The Bills’ overall YBC/Att is up at 3.5, but that’s because Allen is averaging 4.9 on his 89 carries (PFRF). The Bills create room for Cook to utilize his speed against the Pats, through both scheme and execution, and the Bills will continue to need more of that from their OC, OL, and RBs to continue to diversify the offense. 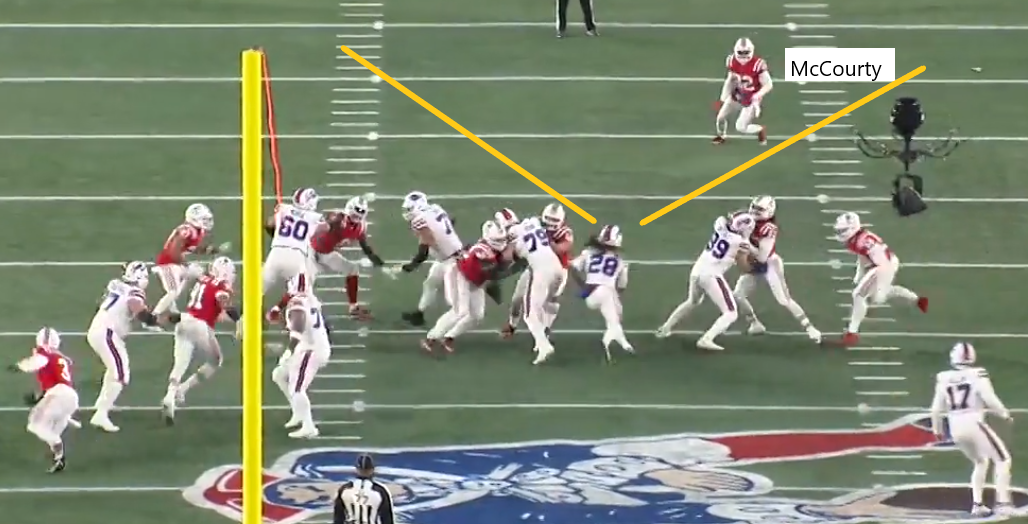 Bringing down Cook in the open field is a difficult task, even for a player as dependable as McCourty. Bryant and Jack Jones hustle to trail and tackle Cook, but it comes 28 yards downfield.

Many have been calling for increased usage rates for motion and play action because they are proven to have positive effects, and the Bills have some of the best positive play rates using those tools (SIS).

It seems each year the Bills have struggled to find a running identity throughout the early part of the season. Hopefully, they have started to figure that identity out as they fight for the division and AFC lead.

I've been studying all of the run game concepts very closely the last few days and it appears like they have honed in on a handful of concepts they are having success with. They are running Duo, Dart, Mid-Zone and Inside Zone as base concepts.