Ken Dorsey, and how we should evaluate play-callers

When Brian Daboll took the New York Giants head coach job, everyone knew the Buffalo Bills were in for a significant change.

Hiring Ken Dorsey, who’d been the Bills’ quarterbacks coach since 2019, reduces the degree of change as much as possible. However, it introduces the variable of inexperience. Dorsey was a QB coach for eight seasons – five in Carolina before his three with the Bills – but he has never before called plays as an offensive coordinator. His lack of experience as the signal-caller will likely encourage many Bills fans to question his play call choices.

Despite excellent overall offensive production in his last two years in Buffalo, Daboll made plenty of seemingly inexplicable choices that left Bills fans anywhere from staring quizzically at their TVs to demanding his replacement.

The #Bills struggles here will never stop until Dabolls blatantly poor decisions are dealt with. It's embarrassing #BillsMafia

This tweet isn’t meant to shame Drew Grier – Drew would first need a capacity for shame. It is indicative of how those of us outside of the team react to unsuccessful play calling. If the Bills had scored a touchdown on this particular possession, most fans would throw more praise at Daboll, especially when they won the game (to Drew’s credit, he’d likely celebrate the TD but mutter about “low red shotgun” the rest of the game). This is an example of evaluating a play call based solely on the result.

Assessing a complicated decision merely on the outcome is a lost learning opportunity. Bad bettors never learn this lesson: just because you hit that eight-leg parlay once does not make the next one a smart bet. To truly evaluate a complicated decision, we need to first know and consider the impacting factors.

All of the following variables are on a continuum, meaning there is a range within each category and sometimes the lines between them are blurry. 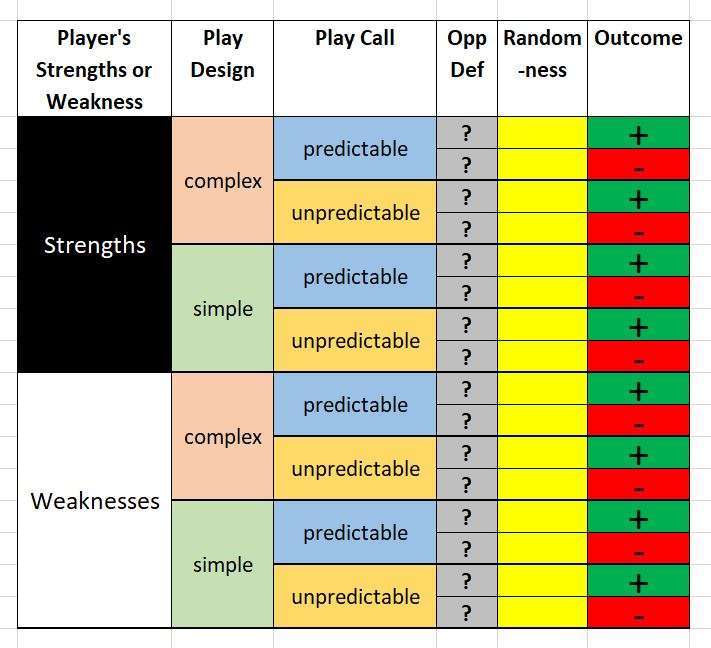 Think of this chart this way. A play caller could create a play building on players’ strengths with a complex design, call it at an unpredictable moment, and still end up with a negative outcome because of the opposing defense or the randomness of the game. The labels of good/bad or smart/dumb are insufficient because of the complexity of the factors and their overlapping interactions.

The physical traits and football skills that players bring to the field are the foundational building blocks for any play call. It seems simplistic, but you don’t run any plays without players, and players’ effectiveness is impacted by their abilities. The tasks players can successfully complete vary over time, even from game to game. We’ve all heard a pitcher say, “my fastball just wasn’t working today” or a golfer say, “my putter felt great this round.” A play caller needs to know the players’ strengths and weaknesses overall and respond to how players are performing within that game.

Play designs run from simple to complex. This isn’t a judgment of good or bad but is a statement on the intricacies of the design. Four Verts is one of the simplest play designs. Everyone has run this in their backyard. It might as well be entitled “Boys Go Fast, Ball Go Far.” 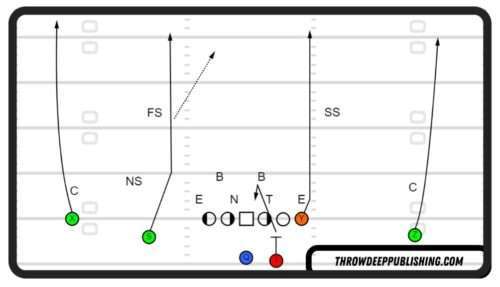 Then there is this. 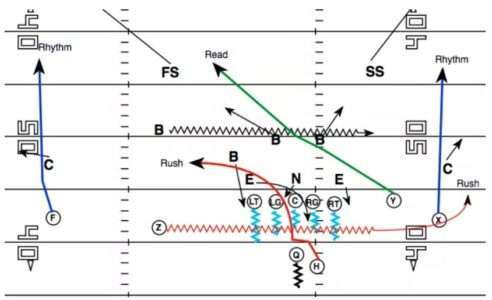 When we consider the WRs might be running read routes, which change based on the defenders’ coverage, and those decisions need to be made and reacted to in under three seconds, we can see how detailed a single play can be.

There are other possible categories for play calls, but the range here will go from predictable to unpredictable. Again, this is not indicative of “smart” or “dumb” but a relative assessment given the situation. A pass play on third-and-15 is highly predictable, but most everyone would bemoan a run call in that down and distance. Predictable doesn’t mean bad. Infamously, the Seahawks called for a short slant to Ricardo Lockette on second-and-goal from the one-yard-line with 0:26 remaining in Super Bowl 49.

Every Seahawks fan would rather have had the easily foreseeable Marshawn Lynch run.

Unpredictable can also mean not good. Do you remember this alignment? 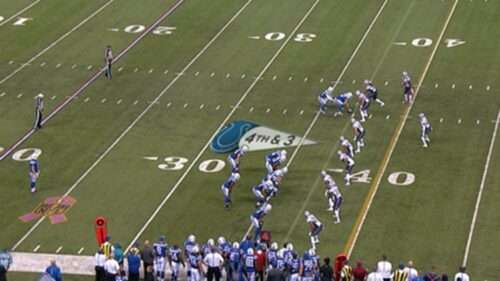 Even an otherwise perfect call can get undone by the defense. There’s an old military phrase that states, “every battle plan changes, and the enemy gets a say.” The defensive play call may exactly account for the offensive play called, or the defensive players could simply do their jobs exceptionally well. Sometimes Ed Reed would just intercept your football and go home, because he was Ed Reed, and he could.

There are 22 elite athletes on a football field running, tackling, throwing, blocking, sprinting, leaping all in relation to an oblong leather spheroid. Weird stuff is going to happen. A play call that is undermined by bad luck is not the play caller’s fault, and a herculean effort by an individual player doesn’t make the play caller a genius.

All of these factors contribute to creating a play with ultimately positive or negative results. When Ken Dorsey makes a play call that is unsuccessful, instead of worrying about whether or not he’s a smart play-caller, we should consider the situation, the players involved, the design, the opponent, and luck as variables.

The Bills’ rookie OC will also need another factor – time. Dorsey won’t walk into Week 1 of the 2022 season as the best version of a play-caller he will ever be. Whether he struggles or has wild success versus the Rams, he will almost certainly have ups and downs throughout the course of a 17-game regular season plus playoffs. Ken Dorsey is not guaranteed to be successful as an offensive coordinator, but let’s evaluate his play calling with a more nuanced and informed approach.