Dolphins vs. Bills: How third-down will impact Wild-Card round matchup

Your Buffalo Bills are in the playoffs – that will never get old – and in the Wild Card Round they face the Miami Dolphins for the third time this season. The Bills and Dolphins split the regular season matchups with each home team claiming victory. As in every game, third downs will be critically important. Even with teams becoming increasingly comfortable with the idea of going for it on fourth down, third down plays and performance are still vitally important and provide an inroad to what teams think they do well or what they think their opponent does poorly. Third and long plays (7+ yards to conversion) are especially crucial as they can represent a resurrected drive for the offense or a chance to get off the field for the defense. Through the lens of third and long, let’s look at the Bills’ defense against the Miami offense.

At first glance, 3rd & 7+ is a huge advantage for the Dolphins’ offense. Miami has been a top 10 offense in DVOA in 3rd/4th & long situations. Mike McDaniel, Tyreek Hill, and Tua Tagovailoa have powered the Fins to nearly 20 percentage points better performance in this category over last season. Their dynamic offensive weapons and innovative play-calling have helped them stay on the field despite adverse situations.

On the flip side, DVOA corroborates what many in Bills Mafia have bemoaned for much of the season: why does 3rd & long feel automatic in 2022? Fans often overreact, but in this specific metric, they may have a point. The Bills’ 26th-ranked defense with a positive DVOA surrendered, pales in comparison to last year’s second-place standing and -74.9% DVOA. There’s no way around it, the 2022 Bills have not performed nearly as well in this area.

The Bills’ 3rd/4th down performance on mid (3-6 yards) and long (7+) is wholly incongruous with the rest of their fourth-ranked defensive output. Nothing else in the chart below rates worse than seventh for the season. But these are season-long statistics, let’s compare more recent performance to the season as a whole because teams can change dramatically from Week 1 to Week 18.

Comparing the last four weeks of the regular season to the entirety of the 2022 campaign, the Dolphins have come back to earth on 3rd & long. This is to be expected as both their starting QB and backup QB have missed time with injuries, but Tagovailoa was healthy for two of those games, so he too contributed to this downturn. (Remember, having more 3rd & Long attempts as an offense is not good. Also, Bust Rate means a play that generates -1.0 or greater in EPA for the offense.)

After their Week 13 game against the 49ers, which started their stretch of five straight losses, many talked about how dropping linebackers deeper in coverage foiled Miami’s heretofore prolific offense. It’s doubtful that simply playing LBs deeper is the full Rosetta Stone to the MIke McDaniel scheme, but it is a component of the Fins’ struggles and coincides with that modification from Demeco Ryans and the 49ers. Do deeper LBs fully explain Miami’s downfall in 3rd & Long performance? Of course not. The main takeaway here is that Miami is no longer performing like a top-10 team in 3rd & Long at this point in the season.

That improvement is great and all, but it’s a matchup league, how well does the Bills’ D matchup versus the Miami O on 3rd & Long? Don’t worry. We’ve got examples.

The differences between Week 3 and Week 15 are almost as big as the Bills’ improvement in Weeks 15-18. A significant portion of Miami’s success on 3rd & Long in Week 3 was the long pass to Jaylen Waddle, and the Bills did not give up that type of toxic play on 3rd & Long in Week 15. Let’s break down one of those Week 15 plays. 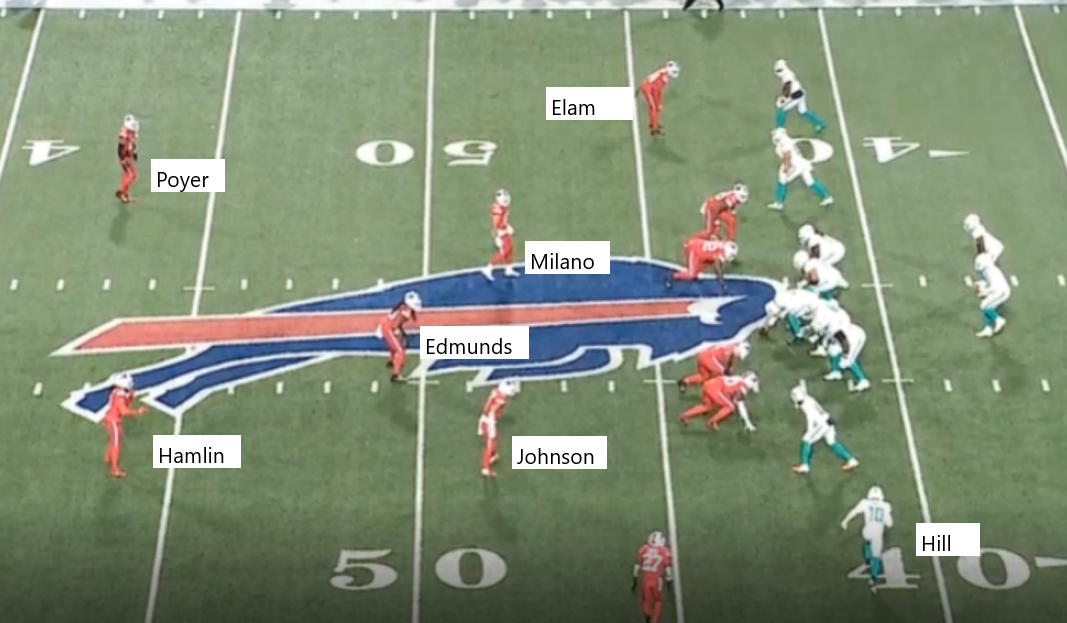 The Dolphins are down by two, 19-21, and come out in 11 personnel (1 RB, 1 TE). The Bills are in their base nickel. Tyreek Hill goes in motion, and Tre White goes with him for a few steps and then releases him. 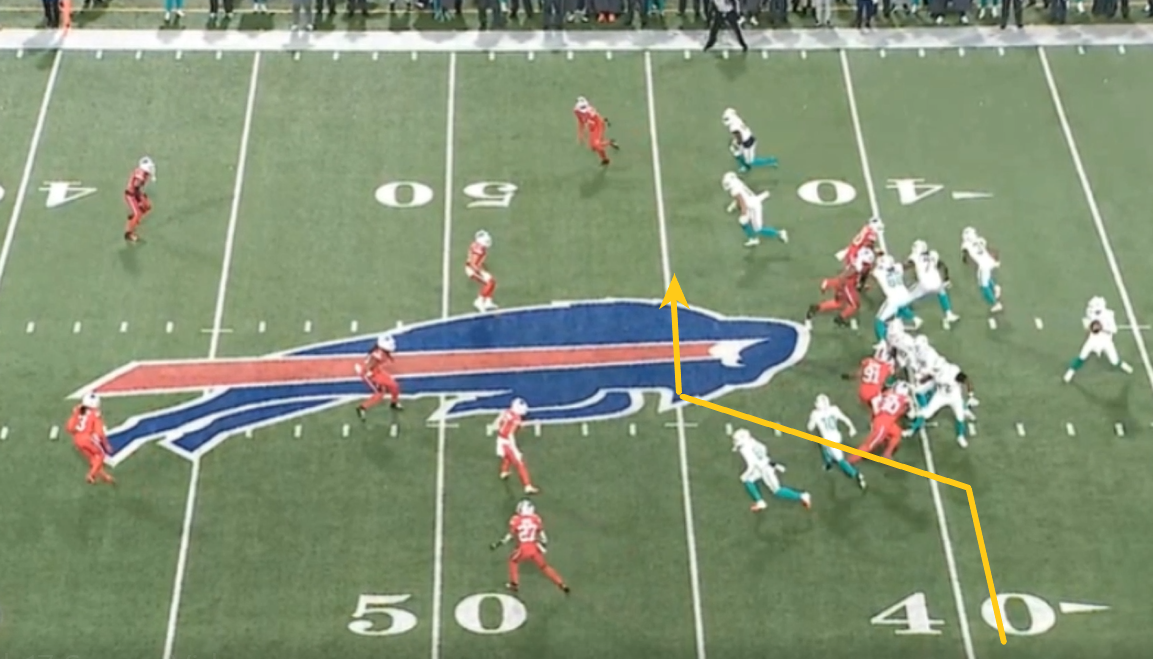 The snap comes and Hill gets past the other WR on the formation’s left side, and Hill cuts between him and the OL, which would create a pick if White was in man and trying to keep up. However, the Bills are in zone, and dropped back to cover the line of gain.

Hill takes in the pass in the middle of the 45-yard line and turns upfield. The play design calls for the receivers on the formation’s right, which now includes the RB coming out on a wheel route, to create a de facto screen, utilizing Hill’s speed and athleticism to hopefully reach the first down. But the play doesn’t account for Matt Milano compressing the lane against two blockers, Jordan Poyer coming up to occupy the RB and extend, or Tremaine Edmunds being 20 yards downfield and filling the gap. 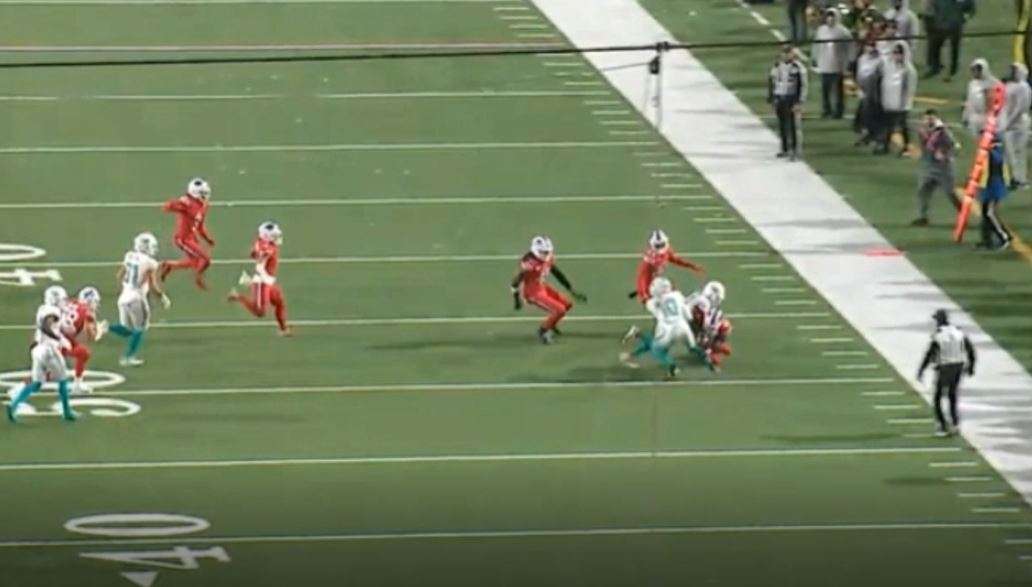 Poyer fights through the block and limits Hill to a seven-yard gain. Fourth down.

There are critical moments in every game, and stats can inform us of how a team is performing, but beware of statistical issues like sample size, anomalies, and trend changes. The Bills’ overall stats on 3rd & Long look poor for the season, but they have substantially changed for the better in the last month. That’s all we can ask for: play your best ball when the playoffs come.