Heading into the 2021 NFL Draft, offensive tackle was not a major concern amongst fans of the Buffalo Bills. Left tackle Dion Dawkins was entering the second year of his $58M extension, and Daryl Williams had just given the best season by a Bills’ right tackle in at least 15 years. Despite what appeared to be newfound stability, Brandon Beane couldn’t resist drafting another athletic marvel when Spencer Brown, a tackle from FCS-level Northern Iowa, was available with the 29th pick in the third round (93 overall).

Brown, at 6-foot-8, 311lbs, was thought to be a project tackle prospect who would likely not see the field for a year or two, but his athletic profile was exceptional, ranking #1 in terms of Relative Athletic Score for tackles since 1987.

Most expected Brown to spend the 2021 season on the bench with occasional work as the likely swing tackle, but his timeline was significantly expedited. Daryl Williams’ decline in play at tackle was foreshadowed by the five pressures he gave up in Week 1 to Pittsburgh, especially after he had excelled versus TJ Watt and company in Week 14 of 2020. The 12 total pressures Williams gave up in the first three weeks of 2021 were part of the reason Brown suddenly became the starting RT in Week 4 vs Houston.

Brown held onto the RT job for the rest of the season, the only exceptions being injury and COVID-related absences for weeks 8-9 and 11-12 respectively. His play was solid for a player making the jump from the FCS level, but it was also predictably inconsistent for a player making a big leap in level of play. Brown quickly became a fan favorite with feisty play and a fun attitude. The former UNI Panther had some road-grader plays, and he flashed the movement skills suggested by his athleticism.

In the video below, Erik Turner discusses the strengths and growth areas Brown displayed in 2021. As Erik noted, on a number of occasions throughout the season, Brown demonstrated good awareness. This screenshot from 8:09 in the video is a small example. Brown has gotten a good position for the cutback lane and has his hands maintaining contact with the defender. He can then look back to locate Singletary and evaluate whether to continue his block or find another way to assist within the play. 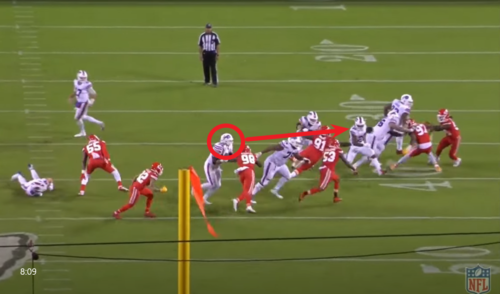 These are just a couple of the types of strengths Brown proved he had in 2021. Check out the video for more of Erik’s in-depth look at Brown. Despite these strengths, we all know McDermott will be looking for those areas for potential growth, and the last three games of the 2021 season were emblematic of Brown’s inconsistencies.

Now, pressures don’t tell the full story, and PFF grades should always be taken with a grain of salt, but we can get a sense of the roller-coaster Brown was on at points in 2021. The talent and potential are there though, so what can be expected from Brown in 2022?

The first hurdle for Brown in 2022 is health. As reported by Katherine Fitzgerald of the Buffalo News, Brown had a minor procedure during the offseason. The procedure is believed to have been on his back, but McDermott seemed confident Brown would be fine to start training camp later in the summer. As of now, there seems little reason to worry, but injuries should be noted, especially when it was a back injury that caused him to miss two weeks in 2021.

The second hurdle is change. The Bills have a new offensive coordinator in Ken Dorsey, new offensive line coach in Aaron Kromer, and Brown will play alongside a new right guard. In his time with the Rams, Kromer’s linemen primarily ran zone-type run plays while last year the Bills had a fairly even zone/gap split but slightly favored to gap (172 zone runs to 197 gap runs). Brown can be successful in either type, but if the Bills, Dorsey, and Kromer favor zone-style running, then that’s a notable difference from what Brown experienced in his first year in the NFL.

Whether it is Ryan Bates or Rodger Saffold, Brown will have a new partner at RG. Preferably, Saffold would bring his experience beside Brown in his second year, but the 12-year veteran might take over the LG job, which would likely mean Bates switches to the right. How Brown develops with his new partner will be an important aspect of how the Bills’ line performs in 2022.

Brown’s third hurdle will be maturing as an offensive lineman. Erik mentions a number of technical issues that worked against Brown last year, but a key one is his weight distribution. Weight distribution affects a lineman’s balance and power, and defenders often used Brown’s inconsistent technique in this area against him. All of Brown’s struggles can be coached up though, and he has proven he belongs. Bills fans should expect to see a continued fire from Brown and to watch him raise his floor from his rookie year.