The Buffalo Bills were back at it this week for mandatory minicamp. According to all of the beat reporters at practice, player attendance was at 100%, which does have a certain level of importance when we are talking about the coaching staff installing their schemes, techniques, and assignments. But it is also important for the players, as this is their time to absorb all of the information being thrown at them. It’s these practices where the Bills’ offensive players can work on their timing and rhythm.

Newly signed wide receiver Tavon Austin has gotten a lot of camera time since signing with the team earlier this month. Austin is a college highlight reel legend but has struggled to consistently produce at the NFL level. Over the last five years, Austin has averaged just over 120 yards – A SEASON. While I would like to see and hear more about the likely starting wide receiver Jamison Crowder, this Austin story is here to stay for the time being. But I will admit, one of the clips from today’s practice was intriguing. WGR’s Sal Capaccio documented Austin running what is often referred to as a “Blaze Out” or “Post Corner.”

I like this route for three reasons. The first is that it’s a route with multiple breaks, which typically times up well with Josh Allen’s penchant to extend plays from inside or outside of the pocket. The receiver will have time to execute this sort of route. Secondly, I love how low Austin gets after he sells the post and just before he is about to snap the route off towards the boundary. He’s low and still has the flexibility to make a sudden cut by rotating that outside hip and foot to make the break extra sharp. 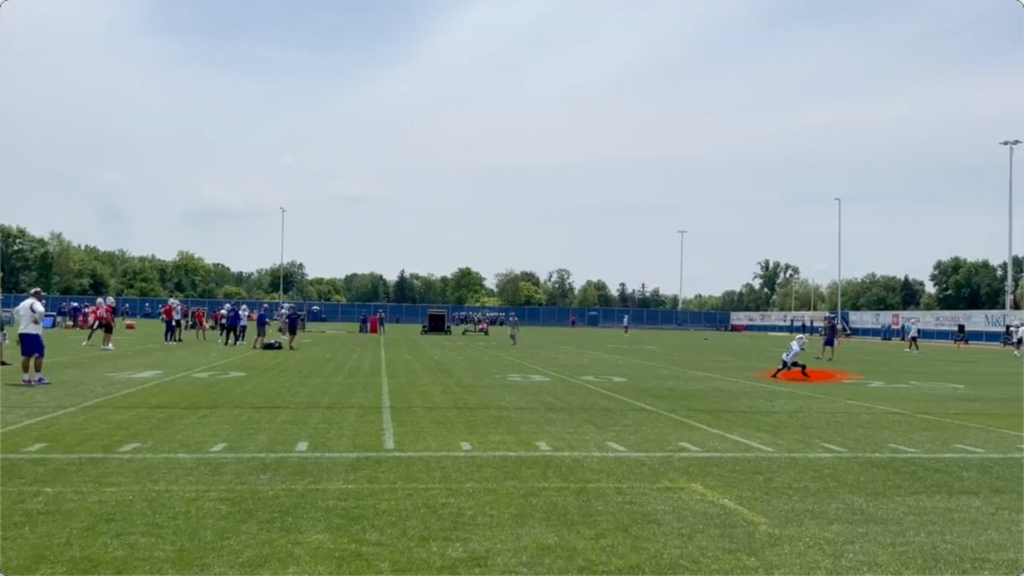 Here’s another angle showing how quickly he makes that break.

Finally, Austin shows his toe-drag swag along the sideline, which highlights his boundary awareness and footwork. 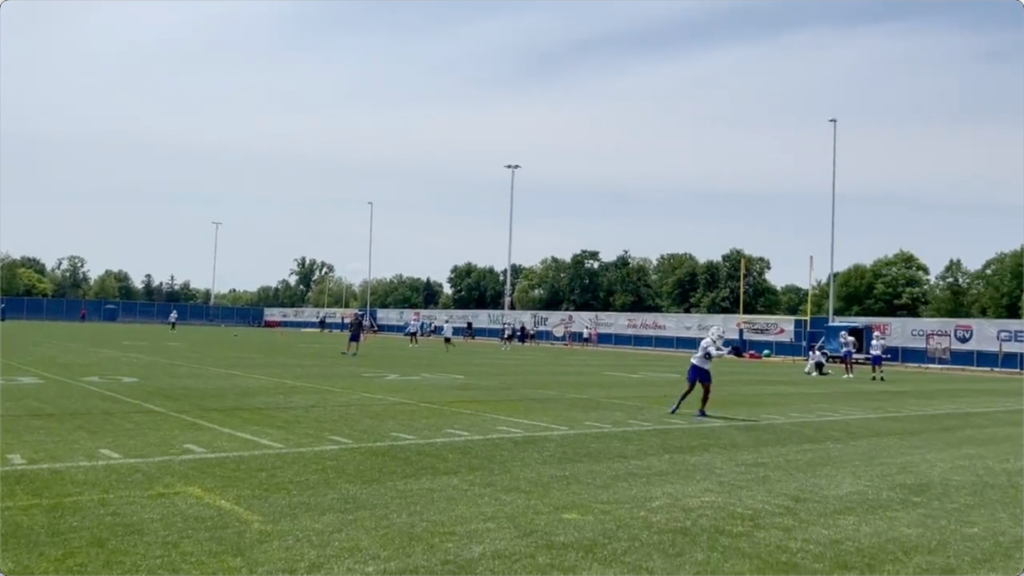 While the route was nice, it was against air. The rep simply shows some of the baseline traits or skills that Austin possesses at this point in his career. The route execution could be a lot different with a starting corner outside on him.

Sal also captured WR Stefon Diggs running what appears to be a similar route and it’s a great video to compare to Austin’s rep. In this video, you can see how Diggs doesn’t quite rotate that outside hip and foot as much so it takes him a little longer to come out of the break.

Wide receiver Isaiah Hodgins also had a nice route and catch, once again captured by Sal. You can hear how hard Hodgins is working on this route, but that catch is low-key difficult.

Nice grab by WR Isaiah Hodgins to show off his length pic.twitter.com/lDOvoUhi5h

It’s difficult because he is tracking the ball up and outside but also because he has to accelerate late and make the catch away from his frame, and with his hands. But because it’s so far out in front and it’s dropping in, it has to be a basket catch. Watch his hands, you can see how soft his hands are. If he doesn’t let his hands fall with the ball on its downward trajectory, the pass could easily bounce off of his hands.

Another thing to note is that while it’s a route with multiple breaks, it’s a slightly different route. The route that Hodgins runs is called a “Viper” route. This route is one that is supposed to look very similar to a Deep Cross route, a route that the Bills love to run. You can see one of the Bills’ coaches acting as the post safety in the video, so he’s imitating as if he is the single-high safety. To an offensive player, a single-high look is referred to as “middle of the field closed.” A two-high safety look is referred to as “middle of the field open,” or “MOFO.”

If you look at the diagram below you see the route that bends over the middle and is labeled “MOFC,” which is the route Hodgins is running.

It’s a route we saw last year captured by Sal.

Such a nasty ‘Viper’ route by Sanders. Typically he is reading the safeties. Generally, you will see this flag route vs. a Post/Single-High Safety. Having a WR like Sanders who is smart, a savvy RR and fast allows your O to run routes like this. https://t.co/9DCpMWWfhF

Bills fans got to see a variation of the “Blaze Out” or the “Viper” route by Diggs against Xavien Howard in 2020. I say it is a variation of these routes because it’s difficult to tell which route it is because of the depth of the break. It’s much more shallow than both of the routes. I imagine the route depth on this play was reduced to get Howard to bite on the crossing route Diggs was selling. Diggs used Howard’s aggressiveness against him and snapped off a sharp route, and even adjusted to the flats defender as he exited the break. As Diggs got his head around, he noticed the flats defender, so he exited on an angle to split the Dolphins’ defenders before climbing the ladder for Allen.

While these routes from minicamp were against air, it is still an important time for the team. These segments are critical for Allen and his weapons. These are the early moments in the season where he and his targets get to feel each other out. Much of the Bills’ offense is based on vision and feel. Receivers must be able to read coverage and or leverage and adjust their routes. Allen then has see the same thing his receivers do but also properly gauge how he needs to throw it to said target. How early he throws it or the type of throw he chooses to execute isn’t the same if he is throwing it to Austin compared to Hodgins. So it was nice to see Allen and the receivers working on routes with multiple breaks, while at the same time seeing what his cache of receivers can bring to the table.